AIM: To review results of traumatic cataracts in children.

METHODS: Only those pediatric patients who fitted in the definite inclusion criteria were considered for study enrollment. They were further examined for any kind of co-morbidities because of trauma, operated upon for traumatic cataracts with intraocular lens implantation. Amblyopia if present was treated. All were re-examined at the culmination of six-week postoperative period. According to the Birmingham Eye Trauma Terminology System the traumatic cataract cases were divided into group 1 (open globe) and group 2 (closed globe), and then determinants of visual acuity were compared.

Core tip: We have studied visual outcome in children in one of the largest published database for cases of traumatic cataracts in children. We have also studied validity of ocular trauma score in case of ocular injuries in pediatric age group.

Very few studies have attended to the challenge of ocular injuries in rural regions, though trauma itself is one of the leading reasons behind monocular blindness in the developed countries[1,2]. The probable causes of ocular injury vary in rural and urban regions and need to be looked into. Aiming available means in the right direction to strategize the prevention of such injuries requires knowledge regarding the etiology of injury[3,4]. Pediatric ocular trauma essentially is prognostically bad and hence is a burden to the society. This can be taken care of to some extent with the help of aforementioned knowledge of etiology of injury.

Trauma to the eye is capable of giving rise to cataracts. There is no difference in the methods which are employed to assess the visual outcome.

The standardization of ocular injury documentation was greatly facilitated following the introduction of Birmingham Eye Trauma Terminology System (BETTS)[5] in regular practice. Hence, the reviewing of visual outcomes will prove to be revealing. In this study, visual outcomes in eyes operated for cataracts resulting from trauma were analyzed at our centre. Also, post-treatment predictors of visual outcomes were studied. Our hospital is situated in an area which is predominantly inhabited by tribal populace (around 4.2 million), where certified eye specialists cater to them with a quality service at a very reasonable and low cost.

We started this study following attaining authorization from hospital management and research board. Guardians’ (of the patients) written permission was also procured. In 2002 this research was proposed as a retrospective review. All children (≤ 18 years old) who developed traumatic cataracts in any of the eyes detected and treated between 2003 and 2009 were registered in this research. Only those who were ready to join and those without any other severe physical collateral injury were taken in. All details related to the cases were obtained from our records and brought together by employing a pre-checked online form. A full history consisting of particulars of trauma, details of its management and type of surgery done to treat it was accumulated. BETTS format (available online) was employed first and subsequent visits reports were collected. In a similar way surgery details were gathered.

All patients with traumatic cataracts were split into two parts, namely, closed globe and open globe injuries. Open globe injuries were again sub-grouped into rupture and laceration injuries. This later type was again subdivided into trauma resulting in intraocular foreign body, perforating and penetrating traumas. Contusion and lamellar laceration were the sub-categories of closed ball injuries.

The usual demographic aspects were recorded, but the main attention was given to the facts related to the time and type of injury, the objects responsible for injury and movement as well as activity at the time of trauma. Also verified were the treatment and details of earlier examinations.

By means of accepted protocol, thereafter, all the patients underwent examination, in which we tested visual acuity according to age as per guidelines laid down by American Academy of Ophthalmology (AAO). Slit lamp examination was carried out for anterior segment.

Depending on the extent of lenticular opacity, all the cataracts were categorized as membranous cataract in those cases where organized lens matter and capsule formed a visually inseparable membrane, rosette cataract where rosette pattern was noted, and white soft cataract when the anterior chamber displayed loose cortical matter along with ruptured capsule.

To assess posterior segment B-scan examination was carried out where media did not permit, otherwise indirect ophthalmoscopy with +20D lens was done[6].

The operative procedure was chosen depending on the state of lens and other ocular tissues. Cataracts with large, harder nuclei were necessarily dealt with by phacoemulsification technique. Softer ones were aspirated either co-axially or bimanually. Membranous cataracts were operated through pars-plana or anterior route with membranectomy and anterior vitrectomy.

Corneal injuries were prioritized and hence repaired first, whereas cataract was managed later on. However, recurrent inflammation was a rule rather than exception in patients who were operated upon previously for injury, which made the anterior vitreous body hazy and required anterior or pars plana vitrectomy and/or capsulectomy (in older patients). In children under two years of age pars plana lensectomy along with anterior vitrectomy was a regulation procedure. Here primary intraocular lens implantation was not considered.

As far as medical management is concerned, cycloplegics and steroids in topical form were given in all cases of which did not have infection. The severity of inflammation in anterior and posterior segments in the surgically treated eye decided the extent of medical treatment. All operated cases were reviewed on the 1st, 3rd, 7th and 14th day. At the end of six weeks of surgery, refraction was ascertained. The routine follow-up review was planned after 3 d, then every week for six weeks, every month for three months and quarterly for 1 year.

Visual acuity of all patients was checked according to AAO directives on all review visits. Slit lamp examination for anterior and indirect ophthalmoscopes for the posterior segment was essentially done at follow-ups. Visual acuity more than 20/60 at the time of refraction examination was considered as having an acceptable grade of vision.

All these follow-up examination data were fed online by means of a format developed by the International Society of Ocular Trauma and sent to a Microsoft Excel Spreadsheet. Time and again thorough appraisal of the data was done on a regular basis to make sure its completion. SPSS17 was utilized to evaluate the data, and a biostatician certified data analysis report.

Analysis (by means of statistical tests and cross tabulation) of many factors related to demographic details such as socio-economic condition (79% belonged to lower stratum), locality (95% were from rural backdrop) and patient entry (P = 0.000) revealed that none of them had any significant bearing on visual acuity after 6 wk (Table 2, Table 3, Table 4 and Table 5).

Causative agent of injury and person’s physical movements as well as type of activity were also not noteworthy reasons as far as six-week post-operative visual acuity was concerned. The most frequent agent causing trauma was stick.

Evaluation of visual acuity before and after surgery revealed that management did essentially increase the visual acuity (Table 6).

Co-axial or bi-manual aspiration of the ruptured cataract with cortical matter in the anterior chamber (in 48.6% cases among the open globe group) showed better visual acuity (Table 7).

In eyes which were greatly inflamed, we routinely did primary posterior capsulotomy with anterior vitrectomy. This also did not influence the six-week postoperative visual acuity to any extent. 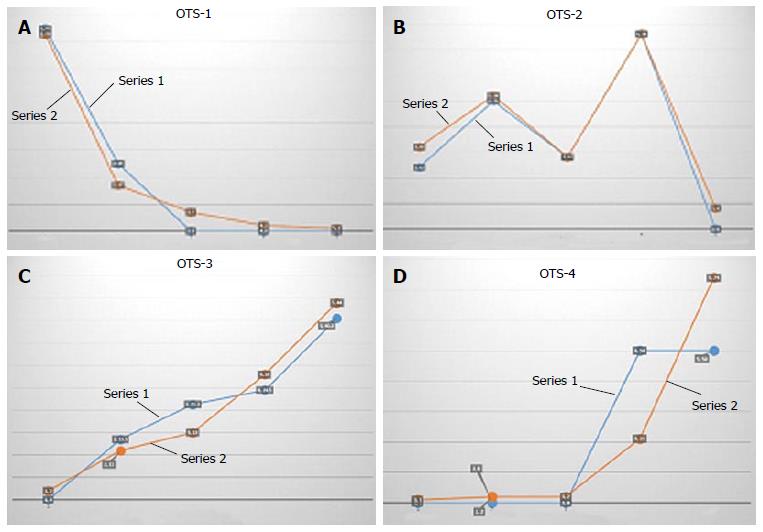 Shah et al[24] reported that a better visual outcome was achieved when intervention was done between 5 and 30 d in adults with traumatic cataracts. As in our study, Rumelt et al[25] found no significant difference between primary and secondary implantation. Staffieri et al[11] performed primary implantation in 62% of cases vs 82% in our study. Kumar et al[10] and Verma et al[19] advocated primary posterior capsulotomy and vitrectomy for a better outcome; our results concurred with these findings.

We are not aware of any such study. Shah et al[26] reported a comparison between open- and closed-globe injuries in the general population. We are also not aware of another large series of successfully treated traumatic cataracts in children. In our study, final visual outcomes were achieved according to the OTS[27] prediction in children with traumatic cataracts. Lesniak et al[28] reported no significant differences between the final visual acuities and the visual acuities predicted by OTS in children. Sharma et al[29] proposed that the OTS calculated at the initial examination may be of prognostic value in children with penetrating eye injuries. However, Unver et al[30] suggested that OTS calculations may have limited value as predictors of visual outcome in a pediatric population. Lima-Gómez et al[31] reported estimates for a 6-mo visual prognosis, but some of the variables required evaluation by an ophthalmologist. Using the OTS, 98.9% of the eyes in the general population could be graded in a trauma room. Knyazer et al[32] reported the prognostic value of the OTS in zone-3 open globe injuries, and Yu Wai Man et al[33] claimed equal prognostic effectiveness of both the OTS and CART in the general population. Although similar findings have been reported by others[32,33], our study presents one of the largest reported databases following cases of pediatric traumatic cataracts classified according to BETTS. Despite the long time delay between injury and treatment in many of the cases in our study, the OTS was still relevant.

In conclusion, satisfactory visual outcome can be achieved in children with traumatic cataracts, and no significant difference was found amongst open and closed globe injuries in pediatric age group.

This study addressed the probably largest published database for traumatic cataracts in children classified according to the Birmingham Eye Trauma Terminology System, and compared visual outcome according to ocular trauma score.

Morphological consideration of traumatic cataracts and treatment guidelines according to the morphological classification may be useful.

This study presents important data that would be of interest.