Article-Type of This Article
Research Report

Intrahepatic cholestasis of pregnancy is a maternal metabolic disease affecting up to 5% of pregnancies[1]. It is characterized by rising maternal serum bile acids and can be complicated by fetal distress, neonatal asphyxia and neonatal respiratory distress syndrome[2-4]. The etiology of intrahepatic cholestasis of pregnancy (ICP) is poorly understood but the perinatal complications are closely correlated with maternal total bile acid (TBA) level[5,6]. Savonius found that high TBA can cause neonatal lung injury but its mechanism is not clear[7]. In order to explore fetal lung alteration during ICP and its possible mechanisms, we investigated maternal and fetal TBA, fetal surfactant production and fetal lung development.

Blood specimens were injected into a test tube dedicated with heparin immediately after being collected. After centrifuge (3000 r/min, 15 min), the supernatant was collected and stored at -20  °C for future experiments. For amniotic fluid, the upper solution was collected after centrifuge (3000 r/min, 15 min), then mixed 1:1 volume with methanol/chloroform. After centrifuge again (2500 r/min, 10 min), the lower liquid was extracted and mixed with a methanol-water extractor (1:1, v/v). The supernatant and interface impurities were discarded after centrifuge (2500 r/min, 10 min), 10 mL lower fluid was taken and sealed into a test tube, then stored for future tests at -20  °C. Before testing, a mobile phase containing chloroform was used to dissolve the samples. 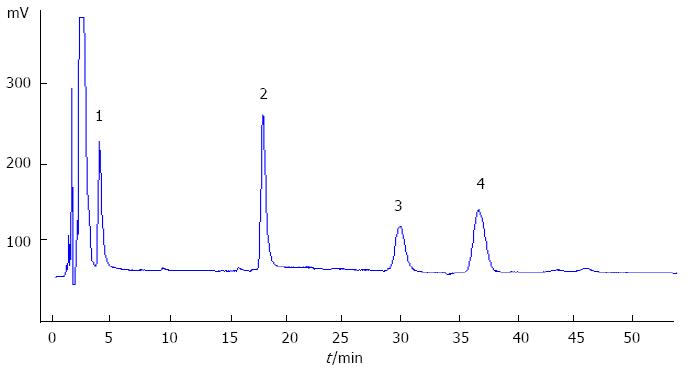 Color ultrasonic diagnostic system (Philips iu22, United States, probe frequency 2.5-6.0 OMHZ) was used for fetal lung area and fetal body weight within 3 days of delivery. Fetal body weights were assessed and calculated by checking the fetal biparietal diameter, head circumference, abdominal circumference and femoral length. Fetal lung areas were calculated by measuring the fetal left and right lung area by freezing an image shot when the fetal heart was at the diastolic phase while the probe was parallel to the longitudinal line of the fetus. The area was digitally analyzed by the computerized system automatically. Data was taken by one professional individual using a mean of 3 measurements. Total lung area and lung area/body weight were digitally calculated[10].

Fetal heart rate patterns, amniotic fluid characteristics and neonatal Apgar score were recorded for evaluation. The situation of the neonates was also recorded for three days to evaluate the fetus and neonates. 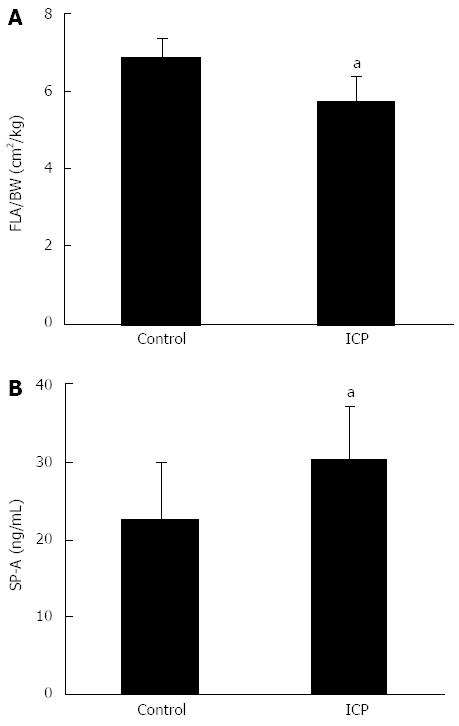 Figure 2 Fetal lung area/body weight ratio and fetal surfactant protein A. A: Ratio between fetal lung area (FLA) and fetal body weight (BW). aP < 0.05 vs control; B: Fetal surfactant protein A (SP-A) concentration. Intrahepatic cholestasis of pregnancy (ICP) has a higher SP-A than that in the control group, aP < 0.05 vs control.
Correlation analysis

The fetal distress, neonatal asphyxia, neonatal respiratory distress syndrome and perinatal death rates in the ICP and control group are shown in Table 1.

Intrahepatic cholestasis of pregnancy is a peculiar disease in middle-late pregnancy, with the pathological characteristics of hepatic capillary bile duct silts, causing increasing clinical bile components in peripheral blood and liver function damage[11,12]. High TBA has toxic cellular effects to many organs and mainly affects the fetus[13], leading to perinatal complications such as fetal distress, meconium inhaled syndrome and neonatal asphyxia[3,4]. The mechanism of ICP causing poor perinatal outcome has not yet been elucidated. Current studies suggest that maternal TBA level is the most sensitive index to diagnose ICP and predict the perinatal outcomes[4,14,15].

Fetal serum bile acid is synthesized from fetal liver, which increases with the gestational weeks. During late normal pregnancy, fetal blood bile acid concentration is higher than the maternal level[16,17]. Bile acid as fat soluble small molecules, diffuses through the placenta, then to maternal blood circulation and the normal liver system removes them from the body. During ICP, under the action of various factors, maternal bile acid levels increase, which damages the placenta, causing insufficiency of placental transferring, leading to fetal bile acid deposition in the body, and finally the fetal blood and the amniotic fluid bile acid levels become higher[18]. With the rise of maternal bile acid concentration, fetal blood bile acid increases and causes delay of fetal lung development[15].

Animal experiments and clinical studies have demonstrated that ICP leads to fetal and neonatal acute lung injury and causes bile acid pneumonia[19]. The cause of poor perinatal outcomes due to ICP is not very clear. Injection of cholic acids into the rabbit trachea induces dyspnea and respiratory failure[20]. The morphological changes are consistent with neonatal pulmonary hyaline membrane disease, decreasing of light transmittance, swelling, atelectasis and pulmonary hyaline membrane disease[6,14,21]. After giving pulmonary surfactant treatment, the symptoms and pathological changes reduce or disappear[22,23]. In a bronchoalveolar fluid study (BALF), it was found that the more bile acid content in BALF, the less production of the pulmonary surfactant A and D. It was demonstrated that the lung injury induced by bile acid is associated with pulmonary surfactant insufficiency[6]. Zecca et al[19] found that bile acids exist in all newborns in the BALF study on ICP.

Pulmonary surfactant is synthesized in alveolar type II epithelial cells. When lung injury happens, the AT II cell synthesis ability decreases, which leads to the alveolar capillary permeability increasing and pulmonary surfactant decreasing[28,29]. Cholic acid can promote the secretion of phospholipase A2 and restrain and reduce the secretion of pulmonary surface active substance[20]. So, even although the amniotic fluid lecithin/sphingomyelin ratio (L/S) indicates mature lung, unusually high levels of cholic acid can still reverse the activity of phospholipase A2, causing a relative lack of lung surface. When using pulmonary surfactant to treat newborns diagnosed with bile acid pneumonia, Zecca found that clinical symptoms and signs obviously improved[19]. In our study, PC and PI levels in ICP amniotic fluid are lower than that in normal pregnancy. We speculate that there may be high concentrations of bile acids in the amniotic fluid and fetal circulation which work together in the respiratory tract and lungs of the fetus. A high level of bile acid has a cytotoxic effect in the lungs, destroying the AT-II cells and decreasing PS, PC and PI synthesis. Our results showed that the ICP’s LPC in amniotic fluid levels are higher than that of the normal group, which might be caused by the degradation in the amniotic fluid. As to what causes the degradation of the PC, further studies are needed. LPC has a direct toxic effect which may damage AT II cells, then affect the synthesis of PS. It can increase the damaging effect to the alveolar capillary system caused by TBA in fetal blood and amniotic fluid. This change may result in increasing cell membrane permeability and alveolar infiltrates.

The lamellar body is the special structure of lung surface active material stored in alveolar type II cellular cytoplasm which has a typical structure like an onion[30]. LB can be found in normal middle pregnancy and increases obviously at 34 to 36 gestational weeks. It is discharged by alveolar type II cells and attached to the alveolar surface, then contacts with amniotic fluid. Amniotic fluid LB increases gradually with the progress of pregnancy and fetal maturity. So, the LB measurement can predict fetal lung maturity[31]. Reports shows high bile acid can induce fetal rat alveolar type II epithelial cells to degenerate through necrosis, the cell surface microvilli structure disappears, the nucleus and mitochondria swells, the balloon sample changes and ridge cavitations disappear[25]. It can also result in the decrease of lamellar corpuscle numbers and the disappearing of the board layer structure.

In conclusion, our study demonstrated that maternal bile acid concentration is associated with fetal and amniotic fluid bile acid level. A maternal high blood bile acid level results in an increased fetal and amniotic bile acid level, which leads to a reduced synthesis of fetal pulmonary surfactant and delayed fetal lung development. High bile acid concentration has an increased perinatal morbidity and mortality. This study may help us to predict perinatal outcomes, to develop strategies improving the prenatal outcome, and to further study the mechanism of how fetal pulmonary AT-II cells are affected. It calls attention to delayed maturation of fetal lungs in ICP patients and to take steps to carefully check and improve fetal pulmonary maturity.

We thank the obstetric women for their participation in this study at Central South University Xiangya Second Hospital. We also gratefully acknowledge the assistance of medical and nursing staff. We appreciate English assistance from Christopher Leukel, a staff member from the University of Utah.

Intrahepatic cholestasis of pregnancy (ICP) can be complicated by fetal distress, neonatal asphyxia and neonatal respiratory distress syndrome. The etiology of ICP is poorly understood but the perinatal complications are closely correlated with maternal total bile acid (TBA) level. It is necessary to explore fetal lung alteration and development during ICP and its possible mechanisms affecting fetal pulmonary maturation.

Lung development in ICP is a research hotspot since neonatal respiratory distress syndrome is a serious complication which is usually related to the immaturity of fetal lungs. Finding out the relationship of TBA concentration in maternal, fetal and amniotic fluid and its association with fetal surfactant, surfactant protein A, amniotic lamellar body and fetal lung development will help us to predict and improve perinatal outcomes. It calls clinical attention to delayed maturation of fetal lungs in ICP and to improve fetal pulmonary maturity.

Previous studies have found that high TBA can cause neonatal lung injury but its mechanism is not clear. In order to explore fetal lung alteration during ICP and its possible mechanisms, the authors investigated maternal and fetal TBA, fetal surfactant production, fetal surfactant protein level and fetal lung development. The study demonstrated that a maternal high blood bile acid level results in an increased fetal and amniotic bile acid level, which leads to a reduced synthesis of fetal pulmonary surfactant and delayed fetal lung development.

ICP: It is also called obstetric cholestasis, jaundice of pregnancy, or pruritus of pregnancy. It is a medical condition during pregnancy in which hepatic capillary bile duct silt. It typically presents with itching and can lead to complications for both mother and fetus. Pulmonary surfactant: It is a surface-active lipoprotein complex formed by type II alveolar cells which reduces surface tension. Mature surfactant in the fetus is very important for neonates to start normal breathing after birth.

The manuscript has new information on lung volume and levels of surfactant phospholipid and surfactant protein A in ICP. This information advances to understanding fetal lung injury in ICP.