Sickle cell disease (SCD) is the first molecular disease in the literature. Although the structural alteration and dysfunction of the sickle hemoglobin (HbS) are well understood, the many factors modifying the clinical signs and symptoms of the disease are under investigation. Besides having an abnormal electrophoretic mobility and solubility, HbS is unstable. The autooxidation rate of the abnormal HbS has been reported to be almost two times of the normal. There are two more components of the oxidative damage in SCD: Free radical induced oxidative damage during vaso-occlusion induced ischemia-reperfusion injury and decreased antioxidant capacity in the erythrocyte and in the circulation. We will discuss the effects of oxidative alterations in the erythrocyte and in the plasma of SCD patients in this review.

Core tip: Oxidative alterations in the plasma and erythrocyte of sickle cell disease may indicate disease progression and phenotype. Detected oxidative modifications may be used as disease markers. Novel drugs targetting oxidative damage of plasma and cellular components may be important as promising therapeutic options.

Sickle cell disease (SCD) is an autosomal recessive disease which was first reported by an American physician, James Herrick in 1904[1]. It was noted for being the first molecular disease after demonstration of the point mutation in beta globin gene in 1949[2]. Acidic glutamate residue at the sixth position was exchanged with a hydrophobic valine in the beta subunit of sickle hemoglobin (HbS). Solubility of abnormal HbS decreases in deoxygenation, dehydration and acidosis resulting with formation of long and solid polymers in the erythrocyte where it interacts with the cytoskeleton forcing the cell to get an almost sickled shape. Although the erythrocyte has a high capacity to move through the narrowest capillaries, the sickle erythrocyte loses its elasticity and tends to slow down and accumulate resulting with vaso-occlusion.

SCD is characterized by anemia, vaso-occlusion and chronic inflammation. Ischemia, and necrosis develop after vaso-occlusion concomitantly resulting with organ dysfunction[3]. Acute vaso-occlusive crisis is the most common clinical presentation that results with hospitalization. Pulmonary hypertension, leg ulcers, priapism and stroke may develop as a complication of vaso-occlusive crisis. On the other hand frequent transfusions result with iron deposition in the tissues and organs of the patients with resultant organ dysfunction[4]. Iron induces generation of free radicals that produce oxidative stress and damages cell membrane, organelles and DNA[5].

Although the structural alteration and dysfunction of the HbS are well understood, the many factors modifying the phenotype of the patients and clinical presentation are under investigation. Understanding the spectrum of biochemical alterations produced by this genetic disease, novel therapeutic approaches can be developed to increase the life quality of the patients.

OXIDATIVE PROCESSES IN THE NORMAL ERYTHROCYTE

The erythrocytes have always been subjected to oxidative stress because they already transport oxygen in the circulation[6]. While there is a continuous flow of oxygen in the erythrocyte, it additionally contains iron (Fe2+) bound to heme in the cytoplasm surrounded by a membrane containing unsaturated fatty acids[7]. However, under normal conditions Fe2+ is isolated in the pocket of heme group and the antioxidant enzymes work to prevent or limit the damage of the oxidant stress[8].

However, there is an excessive increase of oxidative stress in the sickle erythrocyte and plasma medium that the balance between antioxidants and oxidants is altered towards an increased production of oxidized lipids, proteins and lipoproteins (Figure 1). 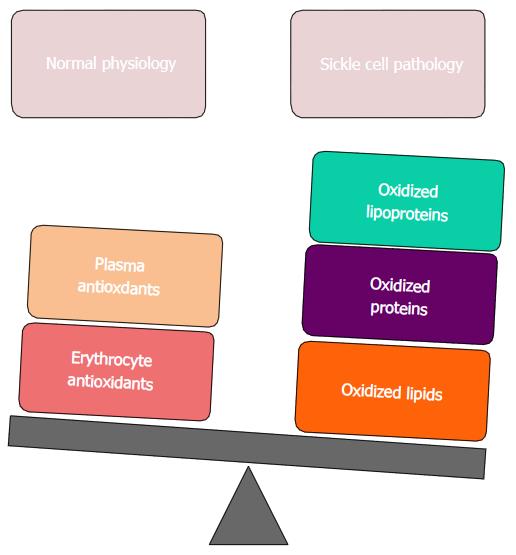 Figure 1 The balance between antioxidants and oxidants in sickle cell disease is altered towards the increase of oxidative stress and production of oxidized lipids, proteins and lipoproteins.
OXIDATIVE PROCESSES IN THE SICKLE ERYTHROCYTE

A point mutation in beta globin gene results with an unstable HbS protein that has an abnormal electrophoretic mobility and solubility[11,12]. Therefore, MetHb formation and decomposition and heme release have tremendously increased[13]. It was first shown by Hebbel et al[9] that autooxidation of HbS was increased compared to normal hemoglobin, HbA. The autooxidation rate of HbS has been reported to be almost two times (1.7-1.9) of the normal with an increased formation of superoxide[9-14].

Excessive amount of lipid peroxidation has been observed in sickle erythrocytes[15] where the membrane damage due to peroxidation was demonstrated by increased permeability to potassium ion[16], altered membrane asymmetry[17], decreased erythrocyte deformability[18], dehydration[19,20] and hemolysis[21].

Membrane proteins of sickle erythrocytes were reported to have oxidative alterations[20-31]. Irregularities in the membranous distribution of band 3 and glycophorin, show that the membrane structure of the sickle erythrocyte is disrupted[20]. It has been observed that, accumulation of aggregates of hemichrome at the cytoplasmic region of Band 3 results in the merging of Band 3 molecules which in turn increases sickle cell fusion to endothelium and recognition by macrophages through increased immunoglobin G and complement activation at Band 3 merging sites[32]. Spectrin, which is a membrane skeleton protein, cannot properly bind to the sickle membrane as a result of the anomalies in the membrane proteins of the sickle cell. There is direct evidence that membrane proteins such as ankyrin, spectrin, Band 3 and Band 4 may have oxidative damage[31].

It has been shown that, membrane lipids of sickle cells also suffer oxidative damage[15]. Excessive lipid peroxidation accompanied by loss of membrane fluidity in biological membranes result in decreased membrane potential and increased permeability of H+ and other ions, followed with cell rupture and loss of cell contents and organelles.

ENDOTHELIAL DYSFUNCTION IN SCD AND OXIDATIVE ALTERATIONS IN THE PLASMA PROTEINS

Plasma protein oxidation is monitored by measurement of protein carbonyl levels[38]. Increased protein carbonyl levels were reported in various diseases and regarded as a factor that might contribute to the disease pathology[39-41]. Carbonyl-modified plasma proteins were demonstrated to trigger endothelial dysfunction[42] which is regarded to be important in the pathogenesis of SCD. We reported increased protein oxidation by carbonyl modification in SCD patients’ plasma where carbonyl levels were correlated to plasma iron and hemolysate zinc levels[43]. Sulfhydrl groups measured in the plasma are mostly from proteins[44]. In fact protein sulfhydryl groups are important antioxidants that can break the oxidation chain. Albumin is the major plasma protein and was been shown to be a strong antioxidant[12]. We found decreased sulfhydryl content in the plasma of SCD patients[43]. All these posttranslational modifications occurred as a result of oxidative stress and needs further investigation to understand their effect on protein function and turnover.

Albumin is the major plasma protein that has antioxidant capacity due to its sulfhydryl groups[45]. Therefore it is a major target for oxidative injury. It was previously reported that free 34cysteine residue of albumin was the target for oxidizing agents[46,47]. A study using proteomics approach reported oxidative posttranslational modification of plasma albumin in the form of malondialdehyde adducts in SCD patients with pulmonary hypertension[48]. Our group showed that electrophoretic mobility of albumin from SCD patients was different than that of albumin from healthy controls[49]. The inflammatory and oxidative medium in SCD possibly targets albumin and induces structural modification. Methemalbumin formation was also reported in SCD patients[50]. This may be an antioxidant defense mechanism where plasma albumin binds oxidized heme and may by this way alleviate toxic effects of free heme on other low abundance proteins.

Malonyldialdehyde is a non-enzymatic oxidative by product of lipid peroxidation. Its main sources are oxidation of polyunsaturated fatty acids and cyclic endoperoxides released during eicosanoid synthesis[51]. Peroxidation of membrane lipids results in loss of membrane architecture that is essential for the deformability of the erythrocyte in passing through capillaries[52]. An erythrocyte with such membrane defects has a shorter life span and becomes a target for the reticuloendothelial system.

We previously reported MDA levels in the plasma and in the erythrocyte of SCD patients were higher than healthy controls[53]. Interestingly these patients had significantly lower blood cholesterol levels and there was a negative correlation between MDA and cholesterol in these patients.

Low-density lipoprotein (LDL) oxidation is a complex procedure in which both the proteins and lipids of the LDL are oxidized, resulting in extensive damage to its structure[59,60]. Macrophages, through increased proteoglycan binding, recognize and scavenge this cytotoxic remnant of native LDL forming foam cells[61,62]. The oxidation of LDL particles draws attention primarily because of their effect on atherosclerosis and coronary syndromes[63]. However, LDL leakage across endothelium and its subsequent oxidation by radicals can result in macrophage activation in all vascular structures. Furthermore, it is known that without oxidation, LDL particles do not result in the accumulation of cholesterol esters in blood vessels[64,65]; we can infer that if LDL is being oxidized, the result will be damage in vascular structure.

High-density lipoprotein (HDL) is known as the apolipoprotein that carries cholesterol back into the liver[70]; although HDL function is not as simple as this sentence suggests, its primary ability to accept cholesterol from LDL and macrophage foam cells is why HDL is considered protective against atherosclerosis[71,72]. Oxidized HDL on the other hand, loses its ability to remove cholesterol[73]. Contrary studies exist, it has been shown that specific forms of oxidized HDL (tyrosylated HDL) may in fact increase cholesterol uptake and decrease atherosclerotic plaque formation[74]. However, the specific nature of these oxidations and the lack of data about the in vivo formation of oxidized HDL raise questions on the reliability of this data for in vivo consideration.

Another important role of HDL is its anti-inflammatory function[75]. Oxidized HDL loses this function almost entirely and may even act pro-inflammatory during the acute phase response[75,76]. Furthermore, HDL levels are also decreased by ongoing inflammation[77,78]. This data suggests that the ongoing inflammatory state, increased acute phase reactants, and the constant oxidative stress that SCD patients undergo can result in a vicious cycle that is a major contributor to HDL dysfunction in SCD[79].

HDLs have additional functions; lipopolysaccharide binding, endothelial cell movement and function modulation, platelet-activating factor inhibition, anticoagulant activity inhibition, anti-oxidant enzyme effects, prostacyclin binding, stimulation of NO release; these are either direct effects through their plasma lipid transport role or effects through enzymes that travel alongside the apolipoprotein[78,80,81]. Paroxonase is one of these enzymes and was shown to have a decreased activity in SCD and researchers suggested that pediatric patients with SCD who had chronic oxidative stress might have a higher incidence of vaso-occlusive crisis[82]. However, SCD patients who had hydroxyurea had normal paroxonase activity. HDL has important antioxidant capacity and HDL mimetic peptides keep a potential to be a therapeutic agent in vascular inflammation[83]. 4F, an HDL mimetic, was shown to be beneficial against endothelial dysfunction in a mouse model of SCD[84].

SCD is regarded as a high oxidative stress situation, because of HbS. It is not unexpected that iron of heme can trigger many oxidative events that may damage erythrocyte and plasma macromolecules. Besides iron, vaso-occlusion induced ischemia-reperfusion injury and chronic inflammation also trigger oxidative damage at the cellular and at the circulation. There are many oxidative markers being studied in SCD. The clinical correlations of molecular alteration of proteins and lipids are important and they may modify disease presentation. New options of therapy in SCD will possibly involve antioxidants-either being synthetic or being biomimetic as adjuvant.