An 82-year-old Japanese man visited our emergency unit complaining of dyspnea. Laboratory data showed 15% atypical lymphocytes in peripheral blood which expressed the T-cell phenotype. Chest/abdominal computed tomography depicted hepatosplenomegaly and swelling of systemic lymph nodes. The patient died of advanced respiratory failure 5 d after the first occurrence of his dyspnea. At autopsy, the pathological features revealed a diffuse infiltration of large atypical lymphocytes to systemic organs including the spleen and lung. In immunohistochemical staining, these cells expressed CD30, TIA-1, anaplastic lymphoma kinase (ALK), CD5 and CD3. An advanced surface molecule analysis revealed a lack of CD54 (intercellular cell adhesion molecule-1) and CD56 (neural cell adhesion molecule). We observed the proliferation and infiltration of these lymphoma cells specifically at the intravascular lesions similar to intravascular lymphoma (IVL). T-cell IVL is not established as an independent clinical entity in the World Health Organization classification, and our patient’s ALK-positive T-IVL in lung appears to be the first reported case.

Core tip: Intravascular lymphoma (IVL), known as a mature B-cell neoplasm that proliferates intravascularly, is established as an independent clinical entity in the World Health Organization classification. Our patient’s case suggests that IVL is one of the characteristic proliferation patterns commonly seen in lymphomas including B- and T-cell neoplasms, anaplastic large-cell lymphoma, and more. We speculate that the function of the original lymphocytes (T or B cells) designates the tumor biology of IVL. Intravascular proliferation is determined by a lack of adhesion molecules. We suspect that the biological aggressiveness would be modified by other characteristic phenotypes such as anaplastic lymphoma kinase, CD30, and CD56.

B-cell intravascular lymphoma (B-IVL) is a rare and special subtype of diffuse large B-cell lymphoma (DLBCL). B-IVL is characterized by the selective growth of lymphoma cells within the lumina of vessels. Intravascular large B-cell lymphoma is categorized as a distinct clinical entity in the World Health Organization (WHO) classification[1,2]. The lymphoma cells are widely disseminated in and involved with extranodal sites, but lymph nodes are usually exclusively spared. The sites of involvement vary and may include organs such as bone marrow, liver, spleen, lung, brain and skin. IVL tumor cells are immunophenotypically positive for mature B-cell markers such as CD19, CD20, CD21 and CD79a, but negative for the homing receptors CD29 (β1 integrin) and CD54 [intercellular adhesion molecule 1 (ICAM-1)]. These molecular features of the cell surface are thought to hinder the extravasated infiltration of tumor cells.

A few anecdotal cases of intravascular T-cell lymphoma (T-IVL) have been reported[3,4]. In these cases the tumor cells expressed T-cell markers, but not the differentiated markers CD4 and CD8. CD30 was also positive. Pleomorphic morphology resulted in the diagnosis of anaplastic large-cell lymphoma. Among these T-IVL cases, none harbored the gene of anaplastic lymphoma kinase (ALK). Here we report the first case of a patient with ALK-positive T-IVL, and we suggest a distinct clinical entity for T-IVL and propose the elucidation of its clinicopathological features.

An 82-year-old Japanese man with no notable medical history came to the ambulatory emergency unit of our hospital because of difficulty in breathing that had persisted for the prior 4 d. In addition to his chief complaint of dyspnea, he had been suffering from anorexia due to nausea, and diarrhea. The dyspnea was progressive and became urgent just 2 h prior to his admission to our emergency unit. A physical examination showed that he was febrile (38.1 °C). His blood pressure was within the normal range at 132/85 mmHg, but tachycardia (136/min) was observed. The respiration rate was 31 breaths/min and irregular. The oxygen saturation was 90% while he was breathing ambient air.

An electrocardiogram revealed arrhythmia at a rate of 130-140 beats/min, with premature atrial contraction and nonsustained ventricular tachycardia, and there was no evidence of ST-segment or T-wave abnormalities. An echocardiogram revealed MR (grade II) and TR (grade I) and hypokinesia in the septum, the posterior wall, and the base of the heart; the ejection fraction was 60% and there was no evidence of systolic function disorder.

A laboratory examination revealed an elevated white blood cell (WBC) count of 24260/μL and an increase of 13% atypical lymphocytes in the WBC differential count. In a blood smear, the atypical lymphocytes were large round cells and their cytosol was basophilic; they also had some vesicles. Anemia with a hemoglobin level of 12.5 g/dL and thrombocytopenia with a platelet count of 10.8/μL were observed. The C-reactive protein level was 32.0 mg/dL, i.e., extremely elevated, and there were slight impairments of liver and renal functions. The prothrombin time international normalized ratio was long, and the d-dimer (7.4 μg/dL) and fibrinogen degradation product (26.8 μg/dL) levels were both elevated. The arterial blood gas test revealed pH 7.46 and metabolic acidosis, accompanied by an elevated level of lactic acid (86 mg/dL), which was compensated for by respiratory alkalosis.

Soluble interleukin-2 receptor was extremely over-secreted (up to 231900 U/mL). The antigens of Streptococcus pneumonia and Legionnaire in the urine and the cultures of blood, sputum, and urine were all negative, as were hepatitis B virus surface antigen and hepatitis C virus antibody. The residual examination findings were intact. X-ray photography elucidated bilateral pleural fluid, an enlarged mediastinum, and swelled bilateral hilar lymph nodes. Chest and abdominal computed tomography confirmed the findings suggested on chest X-ray and depicted hepatosplenomegaly and swelling of the hilar, mediastinum, supraclavicular, and left axial lymph nodes. For the management of the patient’s respiratory and circulatory failure, we admitted him to our intensive care unit. 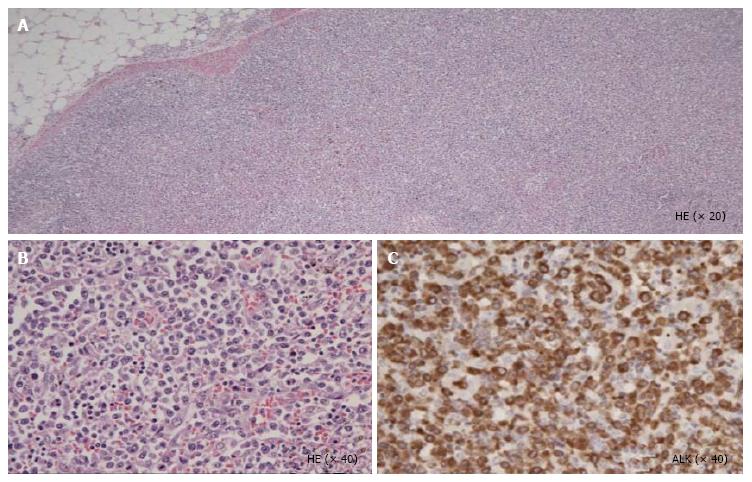 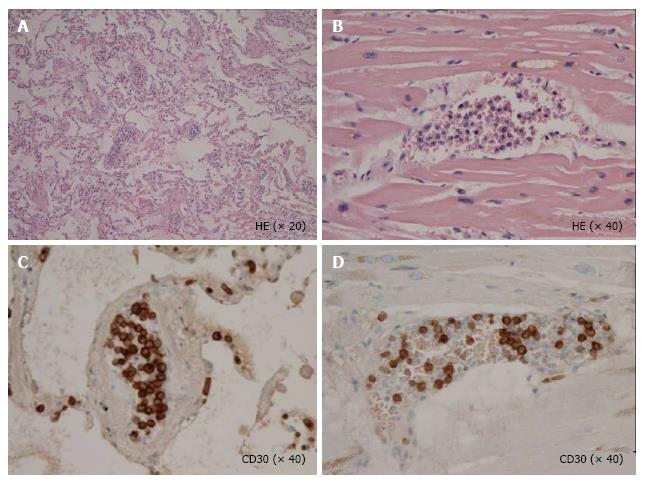 IVL was first described as an angiotropic large-cell lymphoma in which neoplastic lymphoma cells proliferate exclusively within the lumen of small blood vessels[6]. The majority of IVL cases have a B-cell phenotype; other lymphoma phenotypes including T cells[3,7], and NK cells[8] are rare. T-cell lymphoma with IVL proliferation is nevertheless the second most common phenotype of IVL, followed by the NK-cell subtype. IVL has been reported to be linked to cases of plasmablastic lymphoma[9] and even histiocytic[10] and Hodgkin lymphoma[11]. The aggregate of these cases indicates that IVL can compromise all types of lymphoid malignancies (lymphoid neoplasms) or hematological malignancies, and indeed a genetic analysis of IVL revealed the neoplastic cells to be of lymphoid origin[6,12].

IVL defined by the WHO criteria includes “the presence of neoplastic lymphocytes only in the lumina of small vessels, particularly capillary”[1,2]. Lymphocyte migration from a blood vessel to tissues is remarkably important for the immune response in the inflammatory area. Therefore, based on the immunobiological behaviors of the lymphocytes, it has been assumed that IVL cells can proliferate and grow mainly in small vessels. However, the mechanism underlying the endotheliotropic invasion of IVL neoplastic cells is not fully elucidated.

One of the possible explanations for the underlying mechanism was suggested by the results of some B-IVL studies that analyzed the lack of homing receptors (CD44), LFA-1 (CD11a/18), and ICAM-1 (CD54)[2,13] and CD 29 (β1 integrin) and CD54 (ICAM-1)[14,15] on neoplastic cells. In our patient’s case, ICAM-1 was not expressed. This is consistent with the past reports of B-IVL. Akamatsu et al[16] reported adhesion molecules in CD30-positive anaplastic large-cell lymphoma (ALCL), and they revealed that homing receptors were constantly expressed and ICAM-1 was frequently expressed. These findings suggest that the tumor cells of B-IVL and T-IVL may have a common mechanism of selective proliferation in blood vessels. However, the lack of cell adhesion molecules is only part of a hypothesis regarding the tumorigenesis of IVL, and it is not clear whether the lack of adhesion molecules is important for IVL.

As a cause of neoplastic transformation, an association of EBV has been pointed out in the past IVL cases[8]. Among lymphoid neoplasms, an EBV association has been observed in DLBCL, peripheral T-cell lymphoma-unspecified (PTCL-U), and extra-nodal NK/T cell lymphoma-nasal type[8]. Our patient’s case revealed no association with EBV. According to past T-IVL case reports, the EBV association is observed only in some cases[8]. More T-IVL cases should be accumulated to determine the significance of EBV in terms of prognosis and response to chemotherapy, and for a comparison of the nature of the original lymphoma and its intravascular type. Interestingly, NK-IVL showed EBV in most cases[17,18], which suggests the possibility that the mechanism of malignant transformation in IVL may be the same as that of the original lymphoma.

Ko et al[19] reported a first case of intravascular ALCL in lung in 1997. However, they did not report the case’s ALK expression. Several subsequent reports of intravascular ALCL showed that ALK was negative in almost all cases[7,20,21]. Thus, ALK expression is not essential for the etiology of ALCL IVL; however, the ALK phenotype might modify the clinical grade of tumor growth[4,19]. The question of whether cases of ALK-positive ALCL IVL have poorer clinical outcomes compared to ALK-negative ALCL IVL is a topic for further research. Likewise, the biological role of cytotoxic molecules might be also associated with the aggressive behavior of ALCL IVL.

The significance of cytotoxic molecule expression is controversial. In a PTCL-U study, 20% of the lymphomas expressed cytotoxic molecules such as TIA-1 and granzyme B in lymphoma-associated hemophagocytic syndrome (HPS)[22]. In our patient’s case, we incidentally detected HPS in the bone marrow, although the criteria of Asian-variant IVL (which was originally established for B-IVL) were not met. These findings suggest that intravascular ALCL that expresses cytotoxic molecules has an aggressive clinical course or is frequently concurrent with lymphoma-associated HPS. In contrast, HPS is frequently observed in B-IVL, especially among the reported Asian-variant cases, which manifested hepatosplenomegaly, pancytopenia and pathological HPS[23]. It would be interesting to conduct a hematopathology study of the cytotoxic molecules of the Asian variant and compare them with those seen in T-IVL.

In summary, we treated a patient with intravascular proliferating ALK-positive ALCL with cytotoxic molecules. T-IVL is substantially different from B-IVL in clinical aspects, but not immunophenotypically[24]. We speculate that the original T-cell function and migration reflect the tumor biology of T-IVL[25]. Indeed, whichever malignant lymphoma is harboring the intravascular component, it still retains the clinical and biological features of each original subtype of malignant lymphoma[8]. To elucidate the differences of clinical features between B-IVL and T-IVL, further investigation is mandatory. Many cases of IVL may be identified and reported in the future; not only B-IVL (a subtype of DLBCL) but also T-IVL, NK-IVL, and other IVL-like lymphomas. The further accumulation of cases and studies will contribute to the establishment of the etiology of IVL.

The patient was febrile and presented with shortness of breath.

The patient did not receive any treatment for lymphoma and he died of advanced respiratory failure.

Anaplastic large-cell lymphoma (ALCL) is a common subtype of T-cell lymphoma. The homing receptors are cell adhesion molecules targeting endothelial cells and constantly expressed in lymphocytes, even in malignant lymphoma subtypes such as ALCL.

T-IVL is substantially different from B-cell IVL (B-IVL) in clinical aspects, but not immunophenotypically. The tumor cells of B-IVL and T-IVL may have a common mechanism of selective proliferation in blood vessels due to a lack of homing receptors, and we speculate that the original lymphocyte function reflects the tumor biology of IVL.

The authors presented a case of an 82-year-old man with IVL from ALK-positive anaplastic large cell lymphoma. It caused respiratory failure in his lungs and he also had splenomegaly.