Recently, clunealgia has become known as an under-diagnosed cause for chronic low back pain (LBP) or leg pain[1-5]. Trescot[2] stated that cluneal neuralgia is more commonly the result of an entrapped nerve rather than a nerve injury resulting from iliac crest bone harvest. Kuniya et al[3] reported that patients with superior cluneal nerve (SCN) entrapment occurs where pierce fascial attachment at posterior iliac crest. SCN disorders comprised 12% of all patients presenting with a chief complaint of LBP and/or leg symptoms in their clinic and approximately 50% of SCN disorder patients had leg pain and/or tingling.

The concept of a relationship between the cluneal nerve and LBP is not new. A relationship between the cluneal nerve and LBP was sporadically reported several decades ago[6,7]. The first detailed description was made by Strong et al[7] in 1957. Deafferentation of the SCN and/or middle cluneal nerve (MCN) was attempted in 30 patients because these nerves were considered to cause LBP with or without referred leg pain. Of 30 patients, five had referred pain in their leg in the S1 and/or S2 area and had deafferentation of the MCN with favorable outcomes.

Maigne et al[8] and Lu et al[4] performed cadaveric dissections to study anatomy of the SCN and concluded that that the medial branch of the SCN consistently passed through an osteofibrous tunnel and might be spontaneously entrapped in the tunnel. Following these anatomical studies, several surgeons reported successful surgical outcomes of SCN release[3,5,9]. However, surgical reports of release are limited to SCN entrapment. Until now, MCN entrapment has not yet been reported in English literature. This paper is to firstly present a case of MCN entrapment and to draw attention by pain clinicians in MCN entrapment.

In April 2013, a 48-year-old woman presented complaining of LBP and buttock pain radiating to both legs that had gradually developed over 10 years. L4-5 discectomy performed at another hospital two years before resulted in no improvement. The pain was continuous and severe even with long-term daily use of tramadol 225 mg/acetaminophen 1950 mg, pregabalin 50 mg and loxoprofen sodium 180 mg. The visual analog scale (VAS) score was 67 mm and the Roland-Morris Disability Questionnaire (RDQ) score was 18. A neurologic examination revealed no sensory or motor disturbance in her legs. Lumbar motion was greatly limited in all directions because of pain (Appendix, video 1). The finger floor distance in flexion was 50 cm. Palpation of the superior SCN tender point, located 7 cm laterally to the midline on the bilateral iliac crest[7], replicated the postero-lateral aspect of calf pain. She also had significant tender points approximately 1.5 cm caudal to the palpable margin of the bilateral posterior superior iliac spine, by the lateral sides of the long posterior sacroiliac ligament (LPSL). These loci were along the running course of the MCN as described in an anatomical report by Tubbs et al[10]. Palpation of MCN tender points provoked mid-posterior thigh pain. Repetitive infiltration of a local anesthetic, Lidocaine, into each tender point consistently resulted in clear improvement of symptoms for three hours.

The patient was informed that release was previously performed exclusively for SCN entrapment and had never been applied for MCN entrapment. She gave their informed consent to undergo surgical decompression. In May 2013, microscopic SCN and MCN releases were attempted. Surgeries were approved by the Institutional Ethics Committee of our institution. Surgery was performed bilaterally under general anesthesia with the patient in the prone position. An oblique 10 cm skin incision was made over the iliac crests. Being careful not to injure nerve branches passing through subcutaneous tissues, the superficial layer of the thoracolumbar fascia was opened. Two branches of the SCN were identified within 5 cm above the iliac crest and were seen to emerge from the lateral margin of the deep layer of the thoracolumbar fascia. These SCN branches were traced in a caudal direction until they passed over the iliac crest. In agreement with a recent anatomical study, the two medial branches of the SCN where they pierce the thoracolumbar fascia over the iliac crest were found to be entrapped in adhesions. A thin branch of the MCN perforating the thoracolumbar fascia was identified just medial to the posterior superior iliac spines. Although obvious entrapment was not observed, the perforating orifices were opened.

Within one week following surgery, the patient reported that her pain had completely disappeared around the upper iliac crests, but remained around the LPSL on both sides. Palpation on the LPSL consistently induced LBP and leg tingling radiating from the buttocks to the calves on both sides. Injections around the LPSL were repeated every month. Each time, the patient reported reappearance of leg tingling during the block procedure and, soon after, complete improvement in LBP and leg tingling that continued for three days. Consequently, blocks were repeated six times over six months without substantial permanent change in LBP. The VAS score was 50 mm at six months after surgery. Near-full range of flexion was obtained with no pain reappearance, but lumbar extension was still severely limited.

In an attempt to eliminate remaining pain, in December 2013, revision surgery was done. Previous operative incisions were reopened. After gluteal muscle splitting approach, the bilateral MCNs were explored where the nerves penetrate the LPSL (Figure 1). Proximally, the nerves possibly arose from the S2 foramen. The MCNs were decompressed by excising the LPSL where the nerve penetrates the ligament. After revision, pain dramatically improved, precluding need for any medication. The patient had no limitation in lumbar motion. The VAS score at eight months after revision was 0 mm and the RDQ score was 1.

Figure 1 Photo taken during the surgical release of a left-side middle cluneal nerve. Medially to the posterior superior iliac crest (P), the MCN is identified passing under the superficial layer of the long posterior sacroiliac ligament. The nerve is seen to be entrapped under the deeper layer of the long posterior sacroiliac ligament where it penetrates the ligament (arrow). The yellow and red tapes have been used to lift the proximal and distal portions of MCN branch, respectively. MCN: Middle cluneal nerve.
DISCUSSION

The MCN is composed of sensory branches of the dorsal rami of S1 to S3 foramina and travels below the PSIS in an approximately horizontal course to supply the skin overlying the posteromedial area of the buttock[10-12]. The evidence that predominantly the S1 and S2 lateral branches may explain why MCN disorder could cause leg symptoms in posterior thigh to calf.

Tubbs et al[10] studied anatomy running course of MCN and concluded that the MCN would be less likely to become entrapped because MCN travels superficial to the LPSL. On the other hand, anatomical studies by Horwitz[13], Grob et al[12], and McGrath et al[14] showed that the primary and secondary loops of the posterior sacral nerve plexus passed through or underneath the LPSL. They suggested entrapment of the penetrating nerves within or under the ligament is a potential cause for LBP and peripartum pelvic pain.

A diagnosis of SCN/MCN entrapment was made by palpation of the iliac crest or LPSL resulting in marked tenderness and provocation of symptoms, and by pain relief after local anesthetic injection. The SCN tender point was on the posterior iliac crest approximately 70 mm from the midline and 45 mm from the PSIS[3]. The MCN tender point was on the LPSL within 40 mm caudal to the PSIS (Figure 2). 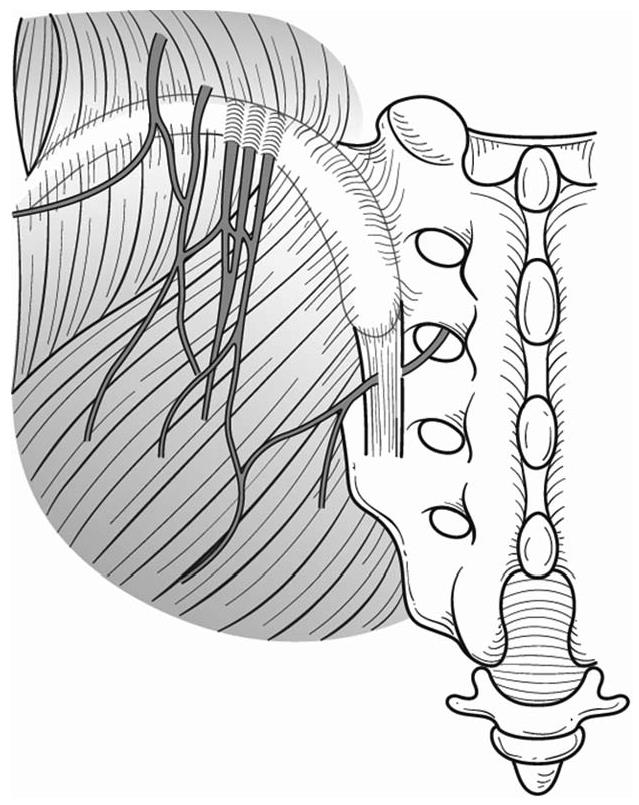 LBP is one of the most common problems that most people suffer at some point in their life. There are many sources of LBP. In most LBP patients, the exact cause of LBP is not clear. Thus, one of the most difficult tasks with LBP is to identify the actual pain generator. Large epidemiological studies show that 20% to 37% of patients with back pain suffer from a neuropathic pain component[21]. So far, neuropathic pain is considered to be caused by lesions of nociceptive sprouts within the degenerated disc, mechanical compression of the nerve root, or by action of inflammatory mediators originating from the degenerative disc[22]. SCN/ MCN entrapment must not be forgotten as cause of neuropathic LBP.

MCN entrapment is underdiagnosed cause of low back pain and leg pain. For a structure to be considered as a potential source of pain, pain must be provoked by palpation or relieved by local anesthetic injection of the tender point around LPSL. Knowledge of this clinical entity would avoid unnecessary sacroiliac joint fusion and spinal surgeries.