To determine if there was a seasonal variation in adults undergoing total hip arthroplasty for end stage hip disease due to osteoarthritis (OA) or sequelae of developmental dysplasia of the hip (DDH).

The total hip registry from the author’s institution for the years 1969 to 2013 was reviewed. The month of birth, age, gender, and ethnicity was recorded. Differences between number of births observed and expected in the winter months (October through February) and non-winter mo (March through September) were analyzed with the χ2 test. Detailed temporal variation was mathematically assessed using cosinor analysis.

There were 7792 OA patients and 60 DDH patients who underwent total hip arthroplasty. There were more births than expected in the winter months for both the DDH (P < 0.0001) and OA (P = 0.0052) groups. Cosinor analyses demonstrated a peak date of birth on 1st October.

These data demonstrate an increased prevalence of DDH and OA in those patients born in winter.

Total hip arthroplasty (THA) is a standard, successful treatment for end stage hip disease. The etiology of such disease is frequently due to osteoarthritis (OA), osteonecrosis/avascular necrosis (ON/AVN), rheumatoid arthritis (RA) and developmental dysplasia of the hip (DDH). Studies of hip osteoarthritis suggest that childhood deformities or residuals of childhood hip disease often experience accelerated or premature joint degeneration[1,2]. DDH is a wide spectrum of deformity ranging from mild acetabular dysplasia to complete and fixed dislocation[3]. Many studies have noted that DDH is more frequent in patients born in the colder months[4-6]. DDH with residual acetabular dysplasia is often followed by OA of the hip. OA has also been reported to be more frequent in people born in the winter[7]. The authors wished to determine if there was any seasonal variation in adults who are treated for OA and DDH in the Midwest region of the United States. This will further augment a previous study which noted a seasonal variation in children with DDH in this region[3].

A retrospective review of all THAs performed from November 1969 through November 2013 at the author’s institution was performed. This review was approved by the local Institutional Review Board. There were 10572 THAs in 8579 patients that met the initial inclusion criteria of primary OA, RA, ON or DDH diagnosis. There were 192 THAs in 157 patients that did not have adequate demographic data and were excluded from any analysis. The diagnosis was OA in 7792 patients, ON/AVN in 523, RA in 204, and DDH in 60. Those with ON/AVN and RA were then excluded, leaving 9671 THAs in 7852 patients for analysis. Date of birth, age, and gender were gathered from the database of total joint surgeries performed at the authors’ institution based on medical records and operation note data at the time of surgery.

The months of the year were divided into winter and non-winter. Winter was defined as October through February, and non-winter as March through September based on local temperatures. The source for the average monthly temperature and precipitation was from the Indiana State Climate Office in Perdue University (https://climate.agry.purdue.edu/climate/facts.asp) (Table 1). Differences by winter and non-winter months were evaluated for both the DDH and OA groups. Temporal variation was analyzed using cosinor analysis (see below).

Continuous data are reported as the mean ± standard deviation. Categorical data are reported as frequencies or percentages. Statistical differences between continuous variables were analyzed by the student’s t-test and between categorical variables by the Pearson’s χ2 test. Statistical Analysis System (SAS) version 9.2 (Cary, NC) was used for t-tests and categorical analysis where the expected value was set as the null hypothesis. The Statistical Package for Social Sciences (SPSS) version 12.0 for Windows (SPSS Inc., Chicago, IL, United States) was used for further statistical analysis. The data were subjected to cosinor analysis in an effort to mathematically define any seasonal variation when present. Cosinor analysis[8,9] determines the best mathematical fit of the data to an equation defined by F(t) = M + Acos (ωt + φ), where M = the mean level (termed mesor), A = the amplitude of the cosine curve, φ = acrophase (phase angle of the maximum value), ω = the frequency (which for monthly analysis is 360°/12 = 30°), and t = time (which in this case is each month). The overall P and r2 value for the distribution are given for the rhythmic pattern described by the cosinor equation for M, A, and φ. The data was analyzed for the entire period of 12 mo as well as decreasing increments of 1 mo. A best monthly fit may not be over a period of 12 mo, but a different time span (e.g., 7 or 6 mo periodicity). Cosinor analyses were performed with ChronoLab 3.0™ software (see Acknowledgement). For all statistical analyses the level of significance was set at P < 0.05. 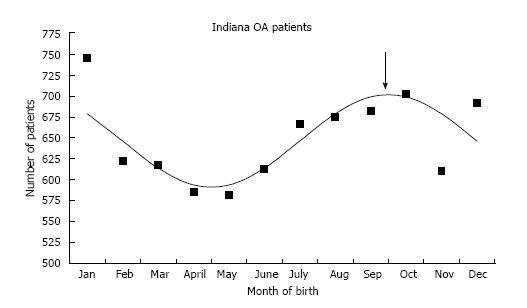 This study demonstrates that both adult DDH and OA patients with end stage hip disease are more frequently born in the colder months. This is similar to pediatric DDH in the previous report[3] and adult Japanese OA[7]. Children with DDH undergoing operative treatment demonstrated a peak birth on 15th October[3], and is essentially the same as the adult OA patients peak on 1th October. Nagamine et al[7] noted that adult hip osteoarthritis in the Japanese population was more prevalent when the patient was born in the colder months. The authors subjected their data to cosinor analysis and found a peak on 20th January (Figure 2). The Japanese OA peak of 20th January is identical to the 26th January peak in Japanese children with DDH from Kochi, Japan[3,10]. 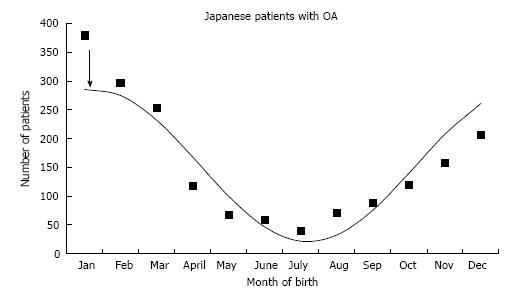 There are certain limitations to this study. This is a retrospective study and diagnosis of DDH and OA was determined mainly by radiographs and patient history. The diagnosis of OA includes both primary and secondary OA[11]. Patients undergoing THA are usually at the end stage of hip arthritis making it difficult to distinguish primary from secondary OA. Some patients will have shallow acetabulae, but once the joint space disappears at the lateral aspect of the acetabulum, it is impossible to differentiate between primary and secondary OA. The patient’s history may help, but most patients with DDH treated in infancy with a Pavlik harness or other abduction bracing may not be aware of that history; they would not be able to remember it due to their young age at the time of treatment and their parents may not have told them of such treatment. Although the DDH group was small, we still believe that the findings are valid due to the highly significant P < 0.0001.

These findings have several possible explanations. First, it is very likely that many of the OA patients had underlying, subtle mild DDH (e.g., minimal acetabular dysplasia). The population of OA, technically the secondary OA, may have just more of DDH than what the authors think. Another possible explanation is that both DDH and OA patients share some common, but as yet unknown, etiology. The possible factors/etiologies that can be invoked are pre-/perinatal maternal factors as well as postnatal environmental factors.

Potential pre-/perinatal factors are a breech birth or difficult delivery[12]. First born and high-birth-weight babies are at an increased risk of DDH, but those do not exhibit seasonal trend[6]. Obstetric pelvic insufficiency shows a seasonal variation with a peak in November to December[13]. In the current study, the authors did not investigate the patients’ birth history (pregnancy number or breech/vertex delivery). Since there been no report showing a relationship between osteoarthritis and breech/difficult delivery, it is most likely that residual DDH (minimal acetabular dysplasia) influenced the incidence of OA.

Another potential perinatal factor is relaxin, which stimulates collagenase and alters connective tissue[14,15]. Collagen metabolism is altered in DDH[16] with increased joint laxity[17]. However, the correlation between DDH and relaxin is controversial[18,19]. In addition, no seasonal variation in relaxin levels has been shown leading to the conclusion that relaxin is not a critical factor. Another possible factor is vitamin D, which is well known to have a seasonal variation with peak levels in the summer[20,21]. Low maternal levels of vitamin D result in low birth weight infants and increased levels in heavy infants[22,23]. A report from Norway suggests hip and knee osteoarthritis is more common in those born in the spring months[24], perhaps due to vitamin D issues.

In conclusion, this study demonstrated that patients undergoing THA for end stage hip disease due to OA or the sequelae of DDH are more commonly born in the colder months. This confirms previous reports noting the same phenomenon in both adult OA and childhood DDH. Further research will be needed to understand this association.

The authors wish to acknowledge the help of Michihiro Kobayashi, MD, PhD, Herman B. Wells Research Center, Department of Pediatrics, Indiana University School of Medicine who extracted the data from the Japanese study by Haginomori[10]. ChronoLab 3.0™ software, designed for use on Macintosh™ computers, cannot be purchased. The software used to perform cosinor analyses was provided through the courtesy of Dr. Artemio Mojón and colleagues, Bioengineering and Chronobiology Labs, ETSI Telecomunicación, University of Vigo, Campus Universitario, Vigo (Pontevedra) 36280, Spain. It can be downloaded from their web site at http://www.tsc.uvigo.es/BIO/Bioing/References.html. Please kindly acknowledge their generosity when using this software.

Winter birth has been associated with developmental dysplasia of the hip (DDH) and it was reported recently to be related to hip osteoarthritis (OA). This study aims to investigate the epidemiology of DDH and OA according to the registry of total hip arthroplasty in the authors’ institution.

To the authors’ knowledge, this is the first study to present both OA and DDH were associated with winter birth. Reviewing the registry over 40 years, the average age at the surgery was statistically younger in DDH patients than in OA patients. Both DDH and OA patients were more born in winter months than in non-winter months.

It is an interesting and well-written article.