Injuries to the pectoralis major are infrequent, with only a few hundred cases currently recorded in the literature.

A thirty-nine-year-old man presented to our ambulatory sports medicine clinic with complaints of painful range motion in the upper extremities, as well as localized swelling and ecchymosis over bilateral pectoralis major and arms.

Four weeks ago, the patient was performing a flat bench pressing with 405 Lbs. On the sixth repetition of his second set, the patient described feeling a tearing sensation and hearing loud pop emanating from both axillae before re-racking the weight (Video 1). Patient reports the immediate onset of a dull and aching pain and swelling following the incident, as well as reduced strength in internal rotation and adduction of the bilateral upper extremities. In the subsequent morning the patient described significant ecchymosis and swelling in the axillae and anterior surface of the arms bilaterally. Upon assessment of medications, patient denied the use of anabolic steroids and fluoroquinolones. Due to issues with insurance, the patient delayed seeking care. The patient provided informed consent for all imaging, reports, and publications regarding his injury.

The patient has no known surgical history and a past medical history of a transient ischemic attack, myalgia and Wilson’s disease.

During a focused physical exam, our patient presented with a loss of the anterior axillary contour bilaterally (Figure 1), as well as retraction of the pectoralis major muscles medially when performing an isometric contraction in the prayer position (Figure 2). On clinical strength testing, the patient’s internal rotation was 4- of 5 bilaterally and adduction was of 4- of 5 bilaterally.

Figure 1 Photographs of patient four weeks since initial injury, demonstrating loss of axillary fold on the right side and on the left side. A: Right side; B: Left side. 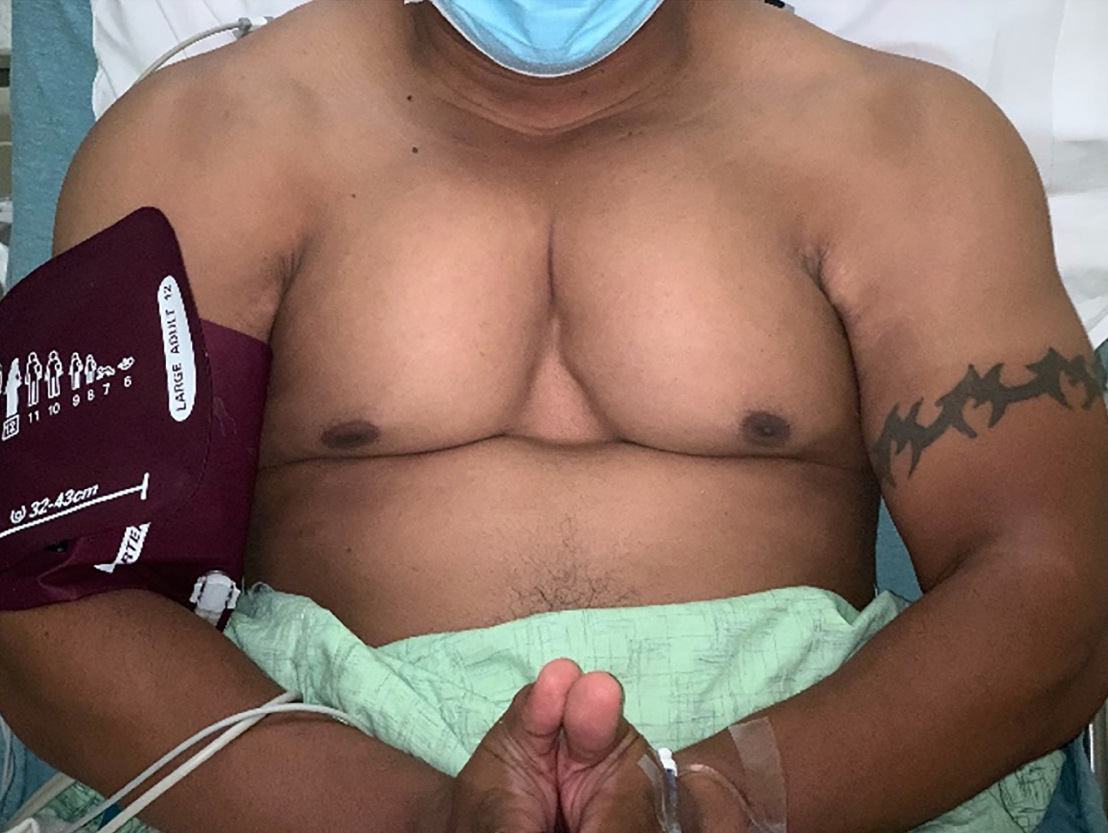 The final diagnosis of was bilateral pectoralis major tendon ruptures.

Due to delayed presentation of the patient and his desire to return to maximal strength, right and left pectoralis major repairs were performed simultaneously using all suture anchors. The patient was placed in beach chair position and both upper extremities were draped simultaneously (Figure 4). The bed was placed in a slight Trendelenburg and a deltopectoral approach was used (Figure 5). Fascia distal to the clavicular head of the pectoralis major was opened and hematoma was evacuated before identifying the retracted ruptured pectoralis major tendon. A tag stitch was then placed through the tendon to facilitate mobilization (Figure 6). The pectoralis major insertion site was then identified lateral to the long head of the biceps tendon and a burr was used to create a bleeding bony bed (Figure 7). Following the preparation of the insertion site three 2.8 Q fix all suture anchors (Smith & Nephew, Waterford, England, UK) were place with one proximally, one in the middle, and one distally (Figure 8). One set of sutures from each anchor pair was passed through the tendon in a horizontal mattress fashion and the second suture set was passed medially to act as a rip stop (Figure 9). All sutures were sequentially tied from proximal to distal. Range of motion was then examined, and wound was closed and dressed in standard fashion. Postoperatively both shoulders were immobilized for 6 wks. in adduction and internal rotation with a Shoulder Immobilizer. 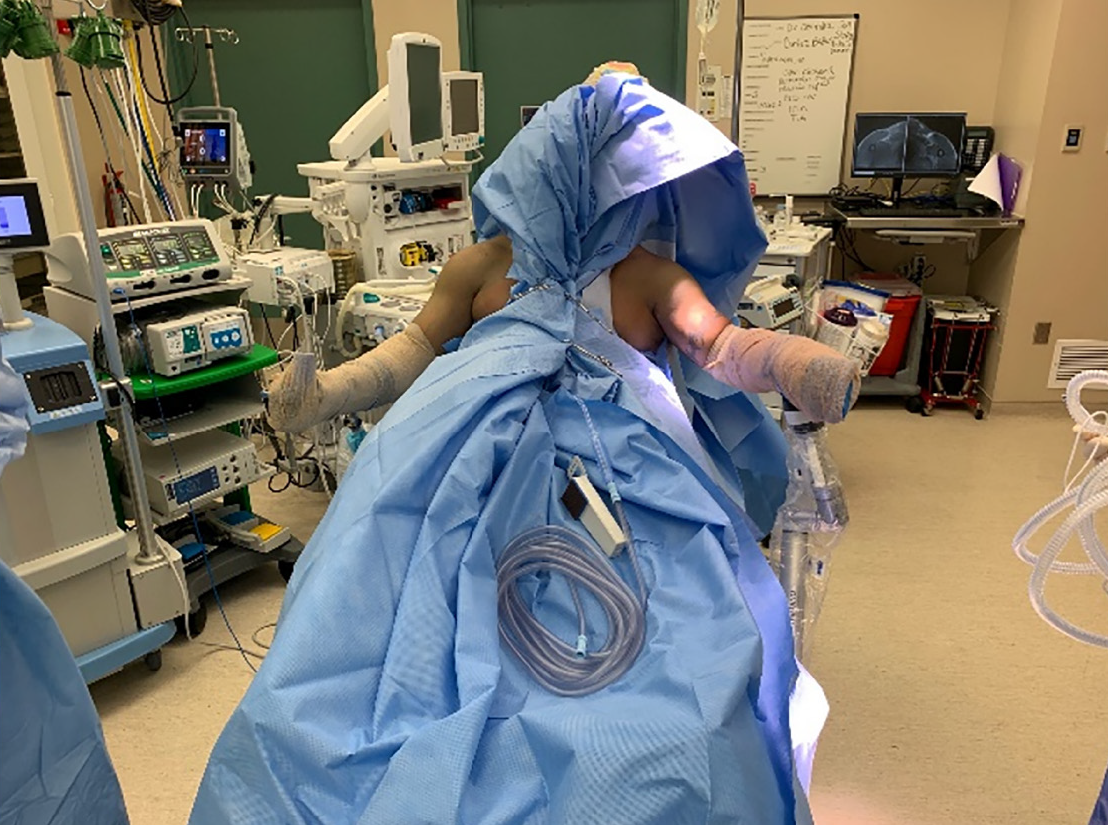 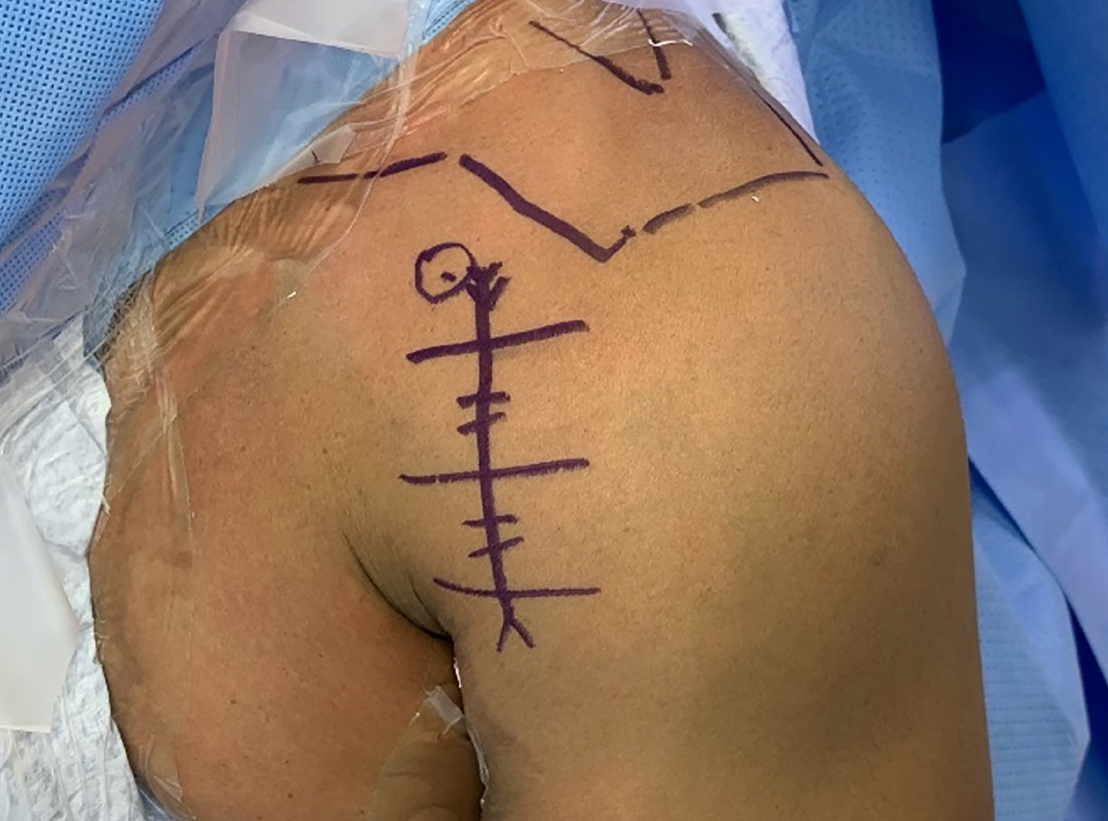 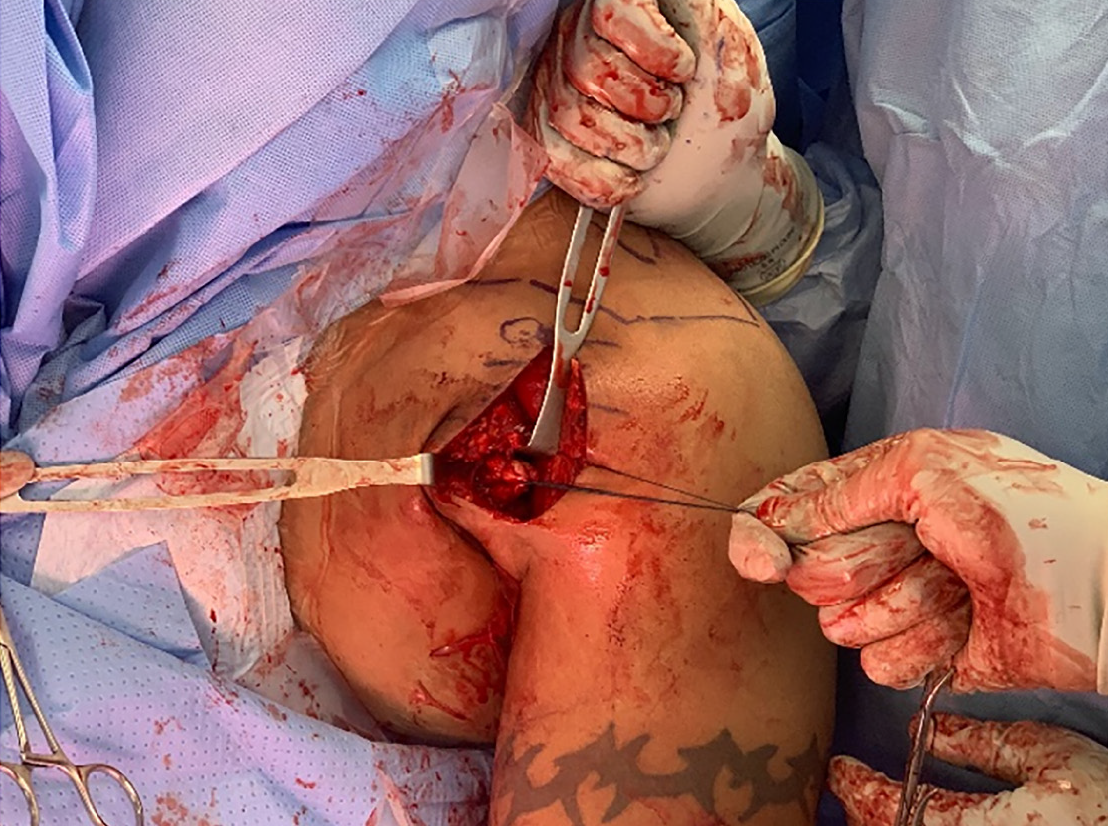 Figure 6  Photograph of a tag stitch that was place through the pectoralis major tendon. 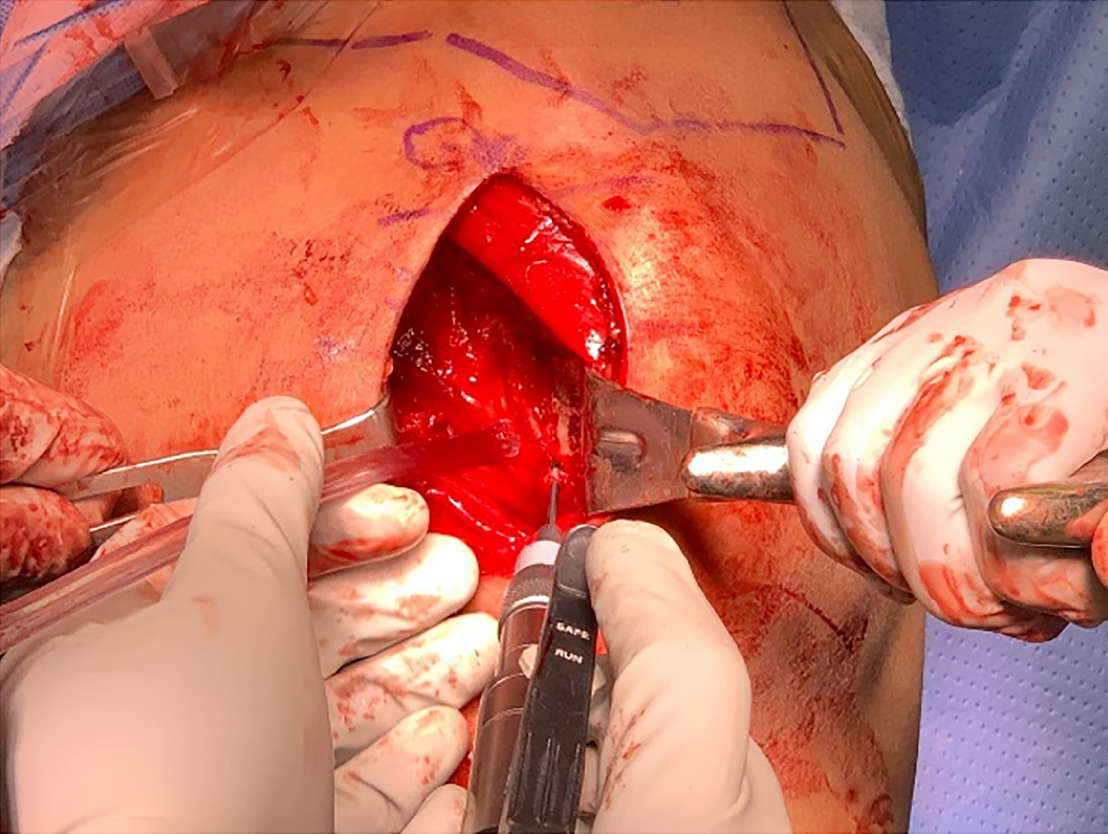 Figure 7  Photograph of the pectoralis major insertion was site with the burr that was used to debride the site and create a bleeding bony bed. 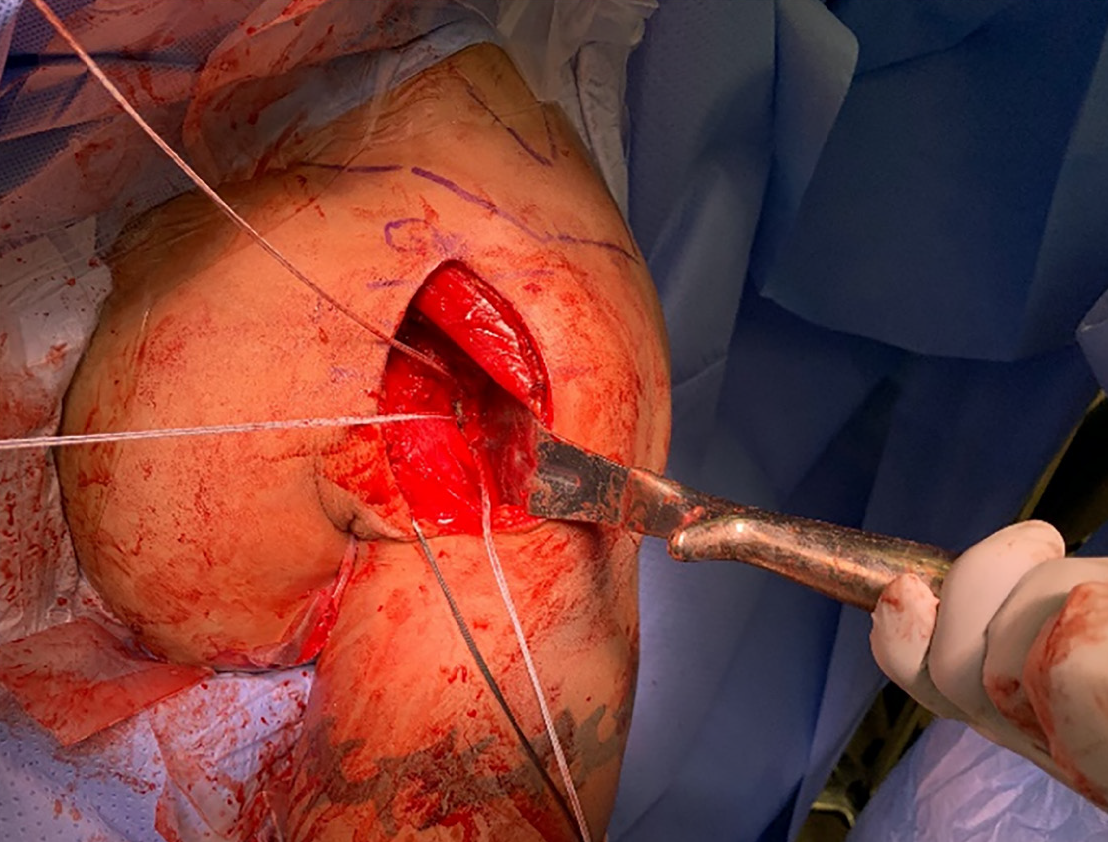 Figure 8  Photograph of the three 2. 8 Q fix all suture anchors that were place with one proximally, one in the middle, and one distally.

At three-months postoperatively the patient presented with strength of 5- of 5 on clinical evaluation of internal rotation and adduction of the arms bilaterally. The patient had full ROM in forward flexion, abduction, internal rotation and external rotation bilaterally. PROMIS interference scores for upper extremity, physical function, pain, and depression were recorded as 54.2, 56.1, 58.1, and 54.2 respectively. VAS score was reported as 2. In physical therapy the patient continued to progress with strengthening and was permitted to start performing a light bench press. The patient has reported no discomfort with resistance training.

During the patients most recent follow-up, six-months postoperatively, the patient reported PROMIS interference scores for upper extremity, physical function, pain, and depression of 51.4, 56.1, 38.7, and 34.2 respectively. The patient reported a VAS score of 1 and demonstrated full range of motion in forward flexion, abduction, internal rotation and external rotation bilaterally (Figure 10). Patient has completed physical therapy and was cleared to resume full strengthening activities. 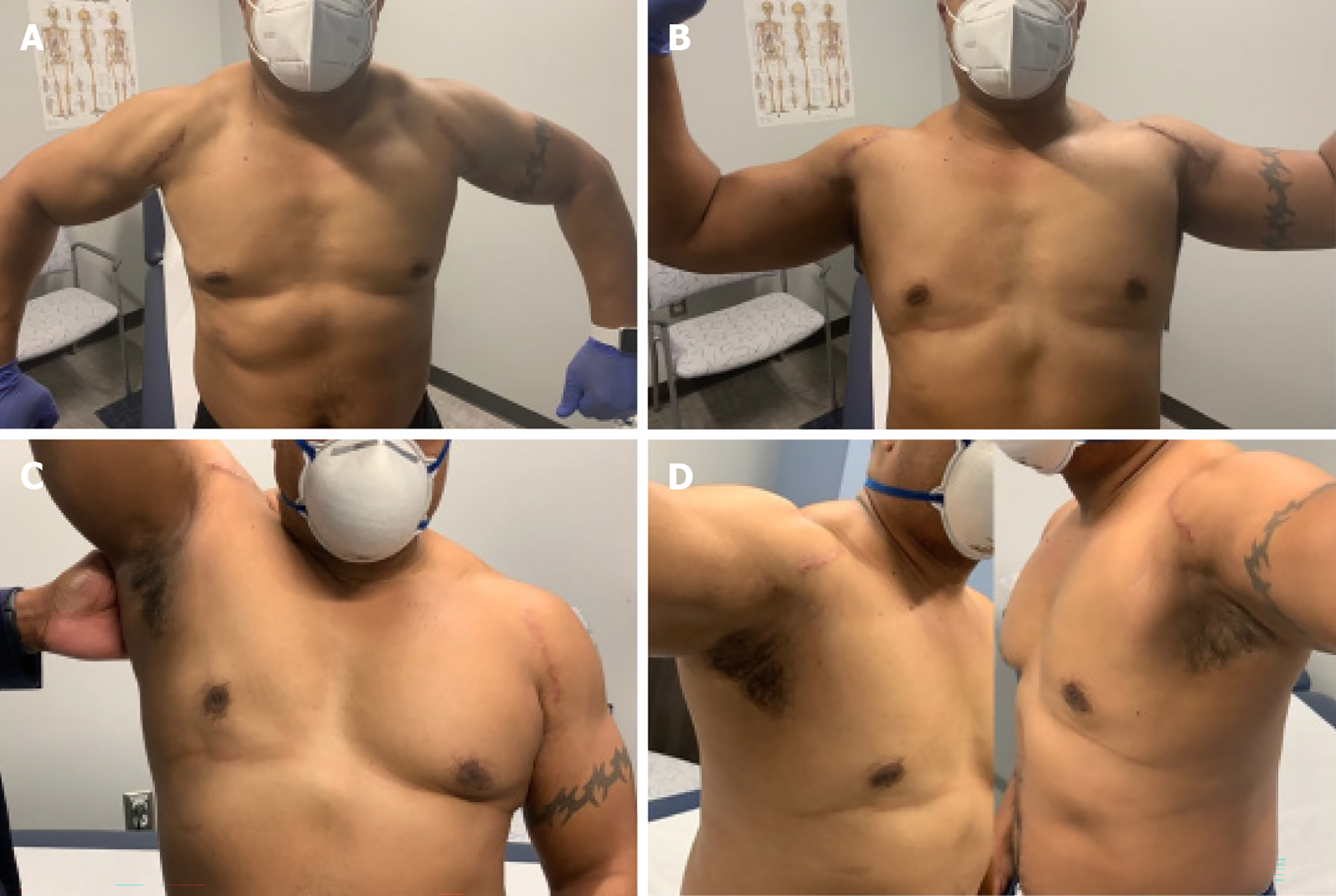 Complete tear of the pectoralis major is increasing in frequency over the past few decades. Between the first case recorded in 1822[13] and 1990, fewer than 90 cases were documented in the literature. As of 2010 there have been 365 recorded cases in the literature[1]. According to a recent meta-analysis performed by Bodendorfer et al[3], there are currently 693 cases reported in the literature. The authors described that 63.2% of pectoralis major tears occur due to weight training, including 39.5% of all documented tears resulting from a bench press. Eighty-seven percent (n = 603) of all tears underwent surgical management either acutely or chronically. Bodendorfer et al[3]’s results were consistent with previous studies which concluded operative treatment is superior to non-operative treatment in both the acute and chronic setting[1,14,15]. When compared to patients managed non-operatively, surgical intervention yielded greater functional improvement according to Bak criteria[2] (scored 1-4; P = 0.027), increased likelihood to regain full isometric strength (P < 0.001), better isokinetic strength as measured against the contralateral side (P < 0.001), decreased chance of a resting deformity (P = 0.037), and increased cosmetic satisfaction (P < 0.001).

Our patient’s bilateral tears occurred during a bench press, the most common mechanism by which pectoralis major tears occur[1-3,7,8]. Additionally, as a thirty-nine year old male, our patient matches the demographic most often affected by pectoralis major tears: males in their third or fourth decade[1-3,5]. MRI was performed (Figure 3) to confirm the diagnosis, determine the severity and location of the tear, and better create a preoperative plan as described by Kadu et al[16].

Our patient presented to our clinic 29 d out from injury; if the patient had appeared closer to the date of injury, staggering the surgeries between sides would have been contemplated. This would have allowed for use of the contralateral arm while the surgical arm was placed in a sling. It has been demonstrated that patients who underwent surgery within 6 wks. of injury have better outcomes compared to those who delay surgery beyond 6 wks.[14,15]. Furthermore, the findings from Ritsch’s[17] prospective study of 25 patients with chronic pectoralis major tears demonstrated even when post-operative clinical outcomes are adequate, as defined by the Bak criteria, there is a higher risk of complications (24%). Considering all factors along with confirmation from our patient there was someone to help with activities of daily living when both arms would be in a sling post-operatively, we decided to proceed with simultaneous, bilateral pectoralis major repairs. Extra considerations must be made when opting to perform simultaneous bilateral surgical repairs. Patient selection is critical particularly in patients with significant comorbidities as there could be potential for increased perioperative complications. Additionally, it is essential that patients understand their limited function in the immediate postoperative period and have a dependable support system to aid in the recovery process. Operative time is also a consideration as performing bilateral simultaneous repairs will lead to increased anesthesia, higher risk for clotting, and increased blood loss than a one sided procedure.

According to the systematic review performed by Gupton et al[18], there are currently three main surgical techniques used to repair a pectoralis major tear: Transosseus suture via drill holes, suture anchor, and unicortical or bicortical button. Compared to the button technique, both the transosseus suture (OR = 6.28, 95%CI: 1.37-28.75; P = 0.02) and suture anchor (OR = 3.40; 95%CI: 1.06-10.85; P = 0.04) techniques demonstrated better clinical outcomes according to the Bak criteria. There was no significant difference between the suture anchor and transosseus techniques (OR = 1.85; 95%CI: 0.33-10.45; P = 0.49). The benefits to the suture anchor technique include decreased operative time, less operative insult to the cortical humerus, excellent approximation of the tendon to its anatomic insertion, and reliable fixation[14,18-21]. All-suture anchors confer the benefit of decreased bone loss and smaller anchor footprint has been demonstrated compared to traditional anchors[22-24]. Only a handful of cases regarding bilateral rupture of the pectoralis major tendon have been recorded in the literature demonstrating staggered repair of each tendon[9-12]; however, this case represents a simultaneous repair for bilateral rupture of the pectoralis major tendons.