METHODS: A single-institution retrospective cohort study was completed. Women of any age who underwent at least a unilateral mastectomy (UM) for primary unilateral breast carcinoma between January 1, 2004 and December 31, 2010 were included. Patients who underwent CPM on the same day as UM were isolated to create two distinct cohorts. Patient and procedure characteristics were compared across groups using R software (version 3.1.0). The percentage of CPMs per year was determined. The Cochrane-Armitage test was used to assess the trend of CPMs over time. A P value of < 0.05 was considered significant.

CONCLUSION: CPM rates from 2004 to 2010 at a high-volume Canadian breast cancer center did not increase over time, in contrast to trends observed in the United States.

Core tip: Contralateral prophylactic mastectomy rates from 2004 to 2010 at a high-volume Canadian breast cancer center do not demonstrate the same rising trend observed in the United States.

During the past decade, the percentage of women with unilateral breast carcinomas undergoing immediate contralateral prophylactic mastectomy (CPM) has steadily increased over time[1-3] despite minimal evidence supporting a survival benefit[4-7]. These increased CPM rates have mainly been described in literature from the United States. CPM trends of similar magnitude and scope have not been quantitatively documented in literature from countries outside of the United States. Switzerland and England have reported much lower CPM rates during a similar time period as the United States data[8,9] - with no significant increase over time noted in Switzerland. It is possible that in these countries, as well as in Canada, where the health care system is based on a socialized medicine model, and surgeons routinely practice under budgetary restraints; a nonlife-saving surgical service such as CPM may not be as readily available as in the United States.

In Canada, lower CPM rates have been noted on a national level compared to the United States[10], but these rates were obtained through administrative databases and no patient level, surgical procedure detail, or outcomes data were reported[10]. Since CPM rates are known to be influenced by resource factors, such as access to genetic testing and immediate breast reconstruction, and other patient factors such as age[1-3,7,8,11-14], examining CPM trends with patient and procedure level data will provide more detailed information on the CPM landscape in Canada.

Therefore, our main objective was to examine the rates and trends of immediate CPM and to compare outcomes of patients undergoing CPM to patients having unilateral mastectomy (UM) alone at a Canadian academic breast cancer center.

We conducted a single institution retrospective cohort study using a prospectively maintained database. The Princess Margaret Breast Disease Database contains information on all patients who undergo any form of breast disease evaluation or treatment at the Princess Margaret Hospital in Toronto, Ontario, Canada. There is an opt-out policy for patients who do not wish to have their medical information collected and used for research purposes. Research Ethics Board approval was acquired and maintained throughout the study. The population of interest included women of any age who underwent at least a UM for primary unilateral invasive or in situ breast carcinoma between January 1, 2004 and December 31, 2010. This time period was chosen to be as contemporary as possible while still coinciding with the literature from the United States and Switzerland. Patients who underwent CPM on the same day as the UM were isolated to create two distinct cohorts: Women who underwent UM alone and women who underwent UM with immediate CPM. Patients with known bilateral disease at the time of their primary surgery were excluded. A diagnosis of atypical hyperplasia, lobular carcinoma in situ, ductal carcinoma in situ or invasive breast cancer in the contralateral breast was considered as bilateral disease. These exclusions were applied in order to isolate, as accurately as possible, CPMs of truly benign breasts.

Patient and procedure characteristics were compared across groups using R software (version 3.1.0). Mean values and standard deviations were calculated for normally distributed continuous variables and median values with interquartile range (IQR) were calculated for variables with a non-normal distribution. For categorical variables, results were expressed as counts and percentages. The Cochrane-Armitage test was used to assess the trend of CPMs over time. A P value of < 0.05 was considered significant. A multivariable logistic regression model was generated with receipt of CPM as the main outcome variable. Covariates used in this model included age, family history of breast cancer, personal history of benign breast disease and receipt of immediate reconstruction. Age was dichotomized to a binary variable (< 50 years or ≥ 50 years old). The remaining covariates were also binary. Covariates were chosen based on clinical significance. Model fit took into consideration any interactions and assessments of collinearity. The statistical review of the study was performed by a biomedical statistician. 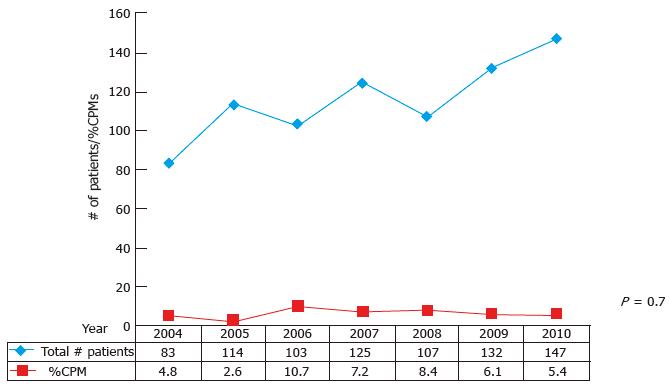 Interestingly, the factors associated with increased rates of immediate CPM at our institution are similar to those found in the United States literature - suggesting that the patient factors influencing the decision to undergo a CPM are possibly the same between the two countries. Within our population, younger patients and those with family history were more likely to undergo CPM, similar to patients in the numerous United States studies[1-3,7,8,12-14]. Furthermore, the use of immediate reconstruction has been associated with increased CPM rates[11,13], and our study results support this finding.

As noted, the lower CPM rates reported from our single institution are consistent with the national Canadian administrative data yet are considerably lower than those reported in the United States during a similar time period. Despite this lower rate, our data highlight similar patient factors influencing the receipt of CPM. Given these similar patient factors, it may be the health system, or practice environment, of Canadian breast cancer surgeons and patients that is contributing to the discrepancy in CPM rates between Canada and the United States.

To address the possible influence of the surgeon and their practice environment on mastectomy and CPM rates, Covelli et al[15] obtained qualitative data from surgeons in both Canada and the United States in 2012 and 2013. Anecdotally, surgeons in both countries endorsed an increasing CPM rate and highlighted incidental findings on pre-operative MRI, access to reconstruction and the surgeon’s initial discussion of treatment options as possible factors influencing these trends. Differences between the surgeons’ practices were noted mainly by the availability of immediate breast reconstruction - a product of the health system. The majority of United States surgeons had ready access to immediate breast reconstruction whereas this was less commonly available to Canadian breast surgeons[15-17]. Barriers to access immediate breast reconstruction may contribute to more women in Canada seeking out a delayed CPM with bilateral reconstruction years after their initial unilateral therapeutic mastectomy. This model of care has several advantages in our healthcare system, as it obviates any cancer surgery wait-time constraints, delay in adjuvant cancer therapies and allows patients time to seek out an institution where specialized breast reconstruction surgeons are available. In addition to immediate breast reconstruction availability, legislation and guidelines within each country were also felt to influence surgical decisions. Legislation in various United States require the discussion of all treatment options available (including reconstruction) at initial consultation whereas, in Canada, no such legislation exists. This examination at the surgeon level provides evidence that the medico-social context of the patient’s treatment environment, or health system, influences the decision to undergo mastectomy with CPM. These results also lead one to consider if the stable CPM rates in Canada are actually lower overall than in the United States due to these possible practice or health system differences, or if the trends in Canada will eventually mimic those of the United States over time given the surgeons’ anecdotal observations, as a similar “lag” was observed regarding IBR trends in Canada[16,17].

Within our single institution study, we were able to evaluate CPM trends among a large sample of patients undergoing mastectomy for unilateral breast carcinoma at a high-volume academic breast center. The prospectively-collected patient level data provided important information regarding factors that may influence a patient’s decision to undergo a CPM. This patient level data allowed us to not only evaluate the CPM rates, but to also investigate possible influencing factors for CPM and to provide insight on the demographics of CPM patients in Canada.

While our study provides patient level data related to CPM trends, the overall low number of patients who underwent CPM (n = 52) should be considered a limitation when interpreting the results as we did not observe a trend over time in regards to CPM rates. While our overall rates are consistent with the national level data, at this point in time it is challenging to draw accurate conclusions related to the influence of the health system on Canadian CPM rates. Our results suggest that health system factors such as access to immediate breast reconstruction and patient factors such as a family history of breast cancer, both influence Canadian CPM rates. In addition, it should be noted that this study only evaluated immediate CPM and did not identify the number of delayed CPMs that occurred at our institution.

Overall, the immediate CPM rates between 2004 and 2010 at a high-volume Canadian breast cancer center did not demonstrate the same increasing trend documented in the United States. However, in keeping with the United States findings, our analysis showed that Canadian patients who had CPM were generally younger, more often had a breast cancer family history and also had immediate breast reconstruction.

Rates of contralateral prophylactic mastectomies (CPM) in women with early stage unilateral invasive breast cancer have been increasing, despite a lack of survival advantage. These rates have mainly been described in literature from the United States. Rates of CPM, and the factors influencing these rates, may be different in the Canadian healthcare system.

CPM is often performed for younger patients and associated with immediate breast reconstruction. With increasing interest in healthcare costs, plus patient satisfaction and outcomes, CPM is an important topic of investigation.

CPM rates at a single Canadian institution do not show the same increasing trend as reported in the United States. Similar to United States literature, CPM is associated with immediate reconstruction and patients with a family history.

By identifying findings in contrast to those reported in the United States, further investigation into potential reasons (i.e., lack of hospital resources, lack of patient desire, etc.) for the difference in CPM rates should be undertaken.

CPM is the removal of a healthy breast for breast cancer prevention or for cosmetic balancing requirements.

The proffered paper is thoughtful, timely and publishable.