To evaluate the overall effectiveness of treatments for metastatic colorectal cancer, a meta-regression was undertaken in which randomized studies from 2000 to 2012 were evaluated and the temporal trend for both overall survival (OS) and progression-free survival (PFS) was determined. Our literature search was essentially based on PubMed but information sources were scanned. Trials were included if a fluoropyrimidine regimen was given to at least one arm and information on PFS and OS was available. Medians for OS and PFS were our end-points. Covariates included temporal trend, arm allocation and Kirsten rat sarcoma status. In analyzing 130 treatment arms identified through our literature search, meta-regression showed an improvement with time for both OS (P < 0.001) and PFS (P < 0.001). The increase in median OS was from 14.9 mo in 2000 to 18.8 mo in 2012. Likewise, the improvement in PFS was from 5.7 to 8.1 mo. Multivariate analysis confirmed these findings. A post-hoc multivariate analysis was focused on patient arms treated with bevacizumab (n = 17) or without bevacizumab (n = 113); the multivariate-adjusted improvement attributable to bevacizumab was 1.66 mo for OS (P = 0.071) and 1.59 mo for PFS (P = 0.002). Overall, our results indicate that OS and PFS have improved from 2000 to 2012 but the extent of this improvement is small and seems to have quite a questionable clinical relevance.

Core tip: We conducted out a meta-regression in which randomized studies from 2000 to 2012 were evaluated and the temporal trend was analyzed [end points: overall survival (OS), and progression-free survival (PFS)]. Our literature search identified all trials employing a fluoropyrimidine regimen. Covariates included temporal trend, arm allocation and Kirsten rat sarcoma status. According to meta-regression of 130 treatment arms, the improvement between 2002 and 2012 was from 14.9 to 18.8 mo for OS (P < 0.001) and from 5.7 to 8.1 mo for PFS (P < 0.001). Our study indicates that OS and PFS have improved from 2000 to 2012 but the extent of this improvement is small.

It is widely accepted that treatments for metastatic colorectal cancer (mCRC) have considerably improved over the past decade[1-7], but quantitative estimates of increased benefits with time are scarce and have rarely relied on meta-analysis techniques. The temporal trend of this therapeutic improvement has mostly been based on narrative reviews or, in some cases, on traditional meta-analyses focused on hazard ratios[8-10]. No attempt has been made to apply meta-regression. Furthermore, the only studies available in this area[8,9] have generally preferred relative indexes (e.g., hazard ratios) rather than absolute end-points like median values of survival[11].

We describe the results of a meta-regression of randomized studies conducted from 2000 to 2012, in which we determined the temporal trend of overall survival (OS) and progression-free survival (PFS). The literature search for our analysis was nearly identical to that of Sidhu et al[8], although we extended our time horizon up to December 2012. Randomized trials were included if they met two simple criteria: fluoropyrimidine-based regimens in at least one arm and data available on PFS and OS. Our statistical methods were the same as those described previously[12-15]. Temporal trends (focused on medians as end-point) were determined for OS and PFS. Time as covariate was defined as publication year for each trial. The statistical model was random effect. Both univariate and multivariate analyses were performed; in the latter case, two additional covariates were tested (arm = experimental group versus controls; Kirsten rat sarcoma (KRAS) status = wild-type, not reported, or mutant type). After completing our literature search, 130 treatment arms were found to meet our inclusion criteria. Most of these trials employed oxaliplatin or irinotecan; bevacizumab was given to a total of 17 treatment arms.

On the basis of these 130 treatment arms, our meta-regression (univariate analysis) found a significant improvement with time for both end-points of OS and PFS (Figure 1). From 2000 to 2012, median OS increased from 14.9 to 18.8 mo. Likewise, median PFS improved from 5.7 to 8.1 mo. The absolute improvement for every 10 years was 3.3 and 2.0 mo for OS and PFS, respectively. 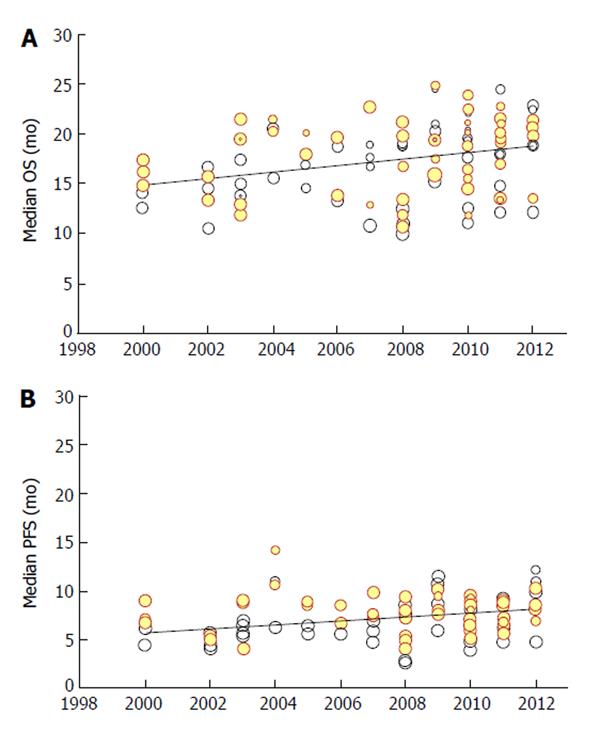 At multivariate analysis, our results for OS showed that the difference between the experimental groups and the control groups was not statistically significant (P = 0.24). Although this result seems to be surprising, one should recall that, over this long time period, there has been a progressive adoption of more and more effective treatments firstly in the experimental groups and then in the control groups. In other words, treatments showing a small but significant incremental benefit when given to the experimental arms have then been incorporated as new standards for the control groups. So, this fact has contributed in this analysis to reduce the magnitude of the overall benefit (expressed with reference to the comparison of experimental arms vs control arms). On the other hand, a significant effect at meta-regression was found for publication year (P < 0.001; direction of the benefit: improvement with time) and KRAS type (P = 0.014; direction of the benefit: improvement with wild-type). The multivariate adjusted improvement in OS was 3.2 mo per decade (nearly identical to that of the unadjusted analysis).

As regards PFS, our multivariate analysis showed that KRAS type was not statistically significant (P = 0.23), whereas significance was achieved by publication year (P < 0.001; improvement with time) and arm (P = 0.033; improvement for experimental arm vs controls). The improvement in PFS per decade was identical to that of the unadjusted analyses. Further details on our meta-regression are reported in the appendix.

Our results highlight the profound difference in this area between statistical significance and clinical relevance. While an improvement in OS (and also in PFS) has clearly occurred from 2000 to 2012, the extent of this improvement is small and so the effect of innovation in this area seems to be scarcely relevant from a clinical standpoint.

In a post-hoc multivariate analysis, we tested whether the patient arms treated with bevacizumab (n = 17) had better outcomes than those not given this antibody (n = 113); this analysis included all previous covariates except “experimental vs control arm” (omitted to avoid confounding with the bevacizumab-based covariate). The multivariate-adjusted improvement with bevacizumab was 1.66 mo for OS (P = 0.071) and 1.59 mo for PFS (P = 0.002); the corresponding univariate (unadjusted) values were 2.21 mo (P = 0.023) and 1.74 mo (P = 0.001), respectively.

Estimating the magnitude of incremental benefits expected from treatments for mCRC has important implications both for this specific therapeutic area and from a more general perspective. For example, from a cost-effectiveness viewpoint, the prolongation of about 3 mo in OS observed in these mCRC patients does not justify the increased expenditure of more than 20000 euros that is frequently claimed for targeted agents; thresholds in this area are in fact at around 5000 euros per month gained.

This approach of evidence synthesis focused on temporal trends deserves to be tested in as many therapeutic areas as possible because a systematic application can be helpful to decision-makers, in particular to balance costs and benefits across different treatments. Finally, the main strength of our study is that a formal analytical tool was employed to determine the temporal trend of outcomes; quantifying these trends through meta-regression can generate more reliable results than those obtained through a purely narrative approach. The limitations of our study include the lack of patient-level data and the small number of studies focused on bevacizumab.