A 66-year-old Japanese man with pancreatic cancer received eleven courses of gemcitabine monotherapy. The tumor responded to gemcitabine until metastatic liver tumors progressed. Subsequently, he was treated with S-1, an oral fluoropyrimidine anticancer agent, as salvage chemotherapy. Forty-two days after initiating S-1, he presented with dyspnea and fever. Chest computed tomography showed diffuse interstitial lesions with thickening of the alveolar septa and ground glass opacity. Serum KL-6 level was elevated to 1,230 U/mL and he did not use any other drugs except insulin. Thus, the development of interstitial lung disease (ILD) was considered to be due to S-1. Arterial blood oxygen pressure was 49.6 Torr in spite of oxygen administration (5 L/min). Steroid therapy improved his symptoms and the interstitial shadows on chest radiograph. Although S-1-induced ILD has mostly been reported to be mild, clinicians should be aware that S-1 has the potential to cause fatal ILD.

Most anti-neoplastic drugs have the potential to induce pulmonary toxicity, involving lung parenchyma, airways, pleura, and the pulmonary circulation. The mainstay of treatment of drug-induced pneumonia is to identify and eliminate the causative agent as soon as possible. Gemcitabine, a key drug for treating pancreatic cancer (PC)[1], frequently induces interstitial lung disease (ILD). S-1, an oral fluoropyrimidine agent which can inhibit cell growth and induce apoptosis, was reported to be active against various malignancies in East Asian countries. Because S-1 is active against gemcitabine refractory PC, as well as chemotherapy naive PC, the quantity of S-1 consumed increases every year. However, only a few case reports have warned that S-1 may induce ILD during the treatment of a variety of malignancies including PC. Here, we report a case of S-1-induced ILD and a review of the literature.

A 66-year-old Japanese man with a history of smoking 2 packs of cigarettes per day for 45 years was admitted to our hospital because of back pain and appetite loss over the previous 2 mo. He had diabetes mellitus and had been treated with insulin self-injection for 10 years. Computed tomography (CT) scan revealed a mass in the pancreatic tail. He was diagnosed with PC (cT2, cN0, cM0) and underwent curative distal pancreatectomy (pT2, pN0, pM0). Nine months after resection, an abdominal CT scan revealed tumor recurrence with multiple liver metastases. He received eleven courses of gemcitabine (GEM) monotherapy (1000 mg/m2 on days 1, 8, and 15, every 4 wk) as first-line chemotherapy and obtained a partial response. Chest CT scan at the time of recurrence showed emphysematous lungs without ILD. After the eleventh course, abdominal CT scan revealed the progression of metastatic liver tumors. Therefore, we decided to replace GEM with S-1 (80 mg/m2 per day, administered for 4 wk with 2 wk rest). Forty-two days after initiation of S-1, he experienced dyspnea on exertion and high fever (39.0°C) He was hospitalized due to hypoxemia (49.6 Torr) in spite of oxygen administration (5 L/min). Physical examination revealed no abnormalities except for bilateral fine crackles on auscultation. Laboratory data showed increased leukocyte counts: 20.1 × 109/L with mild eosinophilia (6.5%) and monocytosis (13%) which were not observed during treatment with GEM; elevated levels of lactate dehydrogenase (569 U/L), C-reactive protein (9.0 mg/mL) and KL-6 (1230 U/mL). Chest radiograph showed reticular and dense infiltrative shadows on both lung fields (Figure 1A), and chest CT scan revealed diffuse interstitial lesions with thickening of the alveolar septa and ground glass opacity, predominantly in subpleural lesions without findings of lung volume loss (Figure 1B and C). Sputum culture for bacteria and fungus was unremarkable. Tests for polymerase chain reaction of Pneumocystis jiroveci DNA in sputum, cytomegalovirus antigen and Mycoplasma pneumoniae antibodies were all negative. The patient received only two drugs, S-1 and insulin, which he had been receiving for 10 years. Thus, we diagnosed S-1-induced ILD in this patient. S-1 was immediately discontinued and high-dose methylprednisolone (500 mg/d, intravenously for 3 consecutive days) followed by oral prednisone (1 mg/kg per day) was administered. Two days after initiating steroid therapy, his symptoms improved considerably. The interstitial shadows on chest radiograph and CT scan were substantially resolved 16 d after starting steroid therapy (Figure 2A and B). 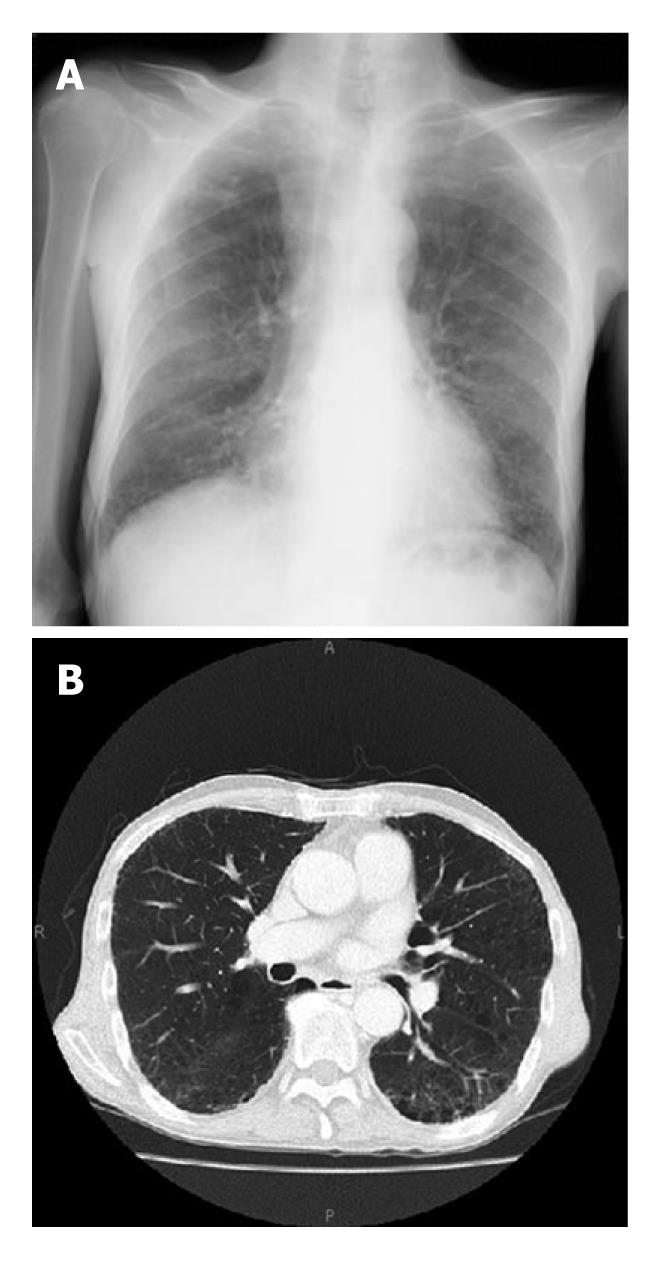 However, his general condition gradually worsened due to tumor progression and he died of hepatic failure 45 d after hospitalization.

PC is responsible for approximately 5% of all cancer-related deaths and is the eighth most common cause of cancer-related death in both genders worldwide[2]. In a palliative setting, GEM has been the standard treatment for advanced PC because it was shown, a decade ago, to result in superior beneficial responses and survival compared with bolus 5-fluorouracil[1]. In Japan, several retrospective studies[3-5] clearly demonstrated the efficacy and impact of S-1 as second-line chemotherapy for advanced PC following GEM failure. The methodology of single-agent systemic chemotherapy, i.e. GEM as first-line treatment followed by S-1, should be regarded as the established treatment for inoperable, advanced PC in Japan as well as other East Asian countries[4]. ILD is the most common GEM-induced lung injury, and various GEM-induced pulmonary toxicities have been reported in cancer chemotherapy. Roychowdhury et al[6] reported that the incidence of dyspnea and that of other serious GEM-induced pulmonary toxicities was 0.45% and 0.27%, respectively. S-1 is an orally administered anti-neoplastic agent composed of tegafur, 5-C-2,4-dihydroxypyridine, and potassium oxonate. Tegafur is a 5-fluorouracil pro-drug which has been a key drug in the treatment of gastrointestinal cancers in Japan and other East Asian countries[7]. The other two components are combined to enhance anti-tumor cytotoxicity and suppress adverse events of the gastrointestinal tract. Pulmonary toxicity due to S-1 has rarely been reported. Case reports of severe ILD[8-13] are summarized in Table 1. Only one of 7 cases including the present study resulted in a fatal outcome due to ILD (9). The patient was a 37-year-old female with advanced gastric cancer with disseminated intravascular coagulation at the time of treatment initiation. S-1-induced ILD seemed to occur relatively early (5 to 45 d) after initiation of treatment with the exception of two cases, who developed ILD 150 d and 360 d after treatment with S-1.

Camus et al[14] reviewed drug-induced ILD and insisted that acute and chronic eosinophilic pneumonia (EP) were well known manifestations. EP is most commonly observed in association with methotrexate, sulfasalazine, para-aminosalicylic acid, nitrofurantoin, or nonsteroidal anti-inflammatory drugs. EP is histologically characterized by the accumulation of eosinophils in the alveolar airspaces, with infiltration of the adjacent interstitial space by eosinophils and variable numbers of lymphocytes and plasma cells. Chest radiography and high resolution CT demonstrate bilateral airspace consolidation, which mainly involves peripheral lung regions. In our patient, mild eosinophilia and bilateral air space consolidation were observed, and a good clinical outcome was achieved leading us to conclude that our case was consistent with EP as the type of ILD. From radiological findings, diffuse alveolar damage (DAD) seemed to be one of the differential diagnoses. Unfortunately, since we could not perform BFE, no definitive supporting evidence for EP or DAD could be obtained. For S-1-induced ILD, steroid therapy was an effective treatment worth trying.

Other cytotoxic fluoropyrimidines such as 5-fluorouracil and Uracil/Tegafur have been reported to cause mortality due to lung injury[15,16]. To best of our knowledge, PC cases with S-1-induced ILD have not been reported elsewhere in the English literature.

As the use of S-1 becomes more common, especially in the field of PC chemotherapy for East Asian patients, the incidence of S-1-pulmonary toxicity may increase proportionally.

In conclusion, all clinicians should be aware that S-1 may cause ILD and fatal outcome.