Following a total gastrectomy, patients suffer the most severe form of postgastrectomy syndrome. This is a significant clinical problem as it reduces quality of life (QOL). Roux-en-Y reconstruction, which is regarded as the gold standard for post-total gastrectomy reconstruction, can be performed using various techniques. Although the technique used could affect postoperative QOL, there are no previous reports regarding the same.

To investigate the effect of different techniques on postoperative QOL. The data was collected from the registry of the postgastrectomy syndrome assessment study (PGSAS).

In the present study, we analyzed 393 total gastrectomy patients from those enrolled in PGSAS. Patients were divided into groups depending on whether antecolic or retrocolic jejunal elevation was performed, whether the Roux limb was “40 cm”, “shorter” (≤ 39 cm), or “longer” (≥ 41 cm), and whether the device used for esophageal and jejunal anastomosis was a circular or linear stapler. Subsequently, we comparatively investigated postoperative QOL of the patients.

The techniques used for total gastrectomy with Roux-en-Y reconstruction significantly affected postoperative symptoms. Our results suggest that elevating the Roux limb, which is not overly long, through an antecolic route may improve patients’ QOL.

Postgastrectomy syndrome is a serious clinical problem that decreases quality of life (QOL) of patients following gastrectomy[1-5]. As postgastrectomy syndrome is the severest form of the side effect following total gastrectomy[1,2,4,5], reducing the incidence of syndrome should be deliberated while choosing the surgical technique. Post-total gastrectomy Roux-en-Y reconstruction (TGRY) is a simple and robust form of reconstruction performed following a total gastrectomy, and it is widely performed and regarded as the gold standard. As laparoscopic surgery is more widely used in recent years, TGRY techniques have become more diverse now than when open surgery was used[6-12]. Although the differences in techniques appear to affect postoperative QOL, the reasons remain unclear due to lack of sufficient investigation. Therefore, we used Postgastrectomy Syndrome Assessment Scale-45 (PGSAS-45), which has developed for postgastrectomy evaluation, to investigate how TGRY surgical techniques affect postoperative QOL[13].

MATERIALS AND METHODS
Retrieving the questionnaire

A total of 52 institutions participated in this study. A questionnaire was distributed to 2922 patients between July 2009 and December 2010 (Figure 1). Eligibility criteria for patients were as follows: (1) Diagnosis of pathologically-confirmed stage IA or IB gastric cancer[14]; (2) first-time gastrectomy; (3) aged 20-75 years; (4) no history of chemotherapy; (5) no recurrence or distant metastasis indicated; (6) gastrectomy conducted one or more years prior to the enrollment date; (7) performance status (PS) ≤ 1 on the Eastern Cooperative Oncology Group scale[15-17]; (8) full capacity to understand and respond to the questionnaire; (9) no history of other diseases or surgeries which might influence responses to the questionnaire; (10) absence of organ failure or mental illness; and (11) written informed consent. Patients with dual malignancy or concomitant resection of other organs (with co-resection equivalent to cholecystectomy being the exception) were excluded. Of the distributed questionnaires, 2520 (86%) were retrieved; 152 questionnaires were excluded. A total of 2368 questionnaires were analyzed and it was observed that total gastrectomy was performed in 393 patients; all underwent reconstruction using Roux-en-Y method. Questionnaires of these 393 patients were selected for examination in this study. 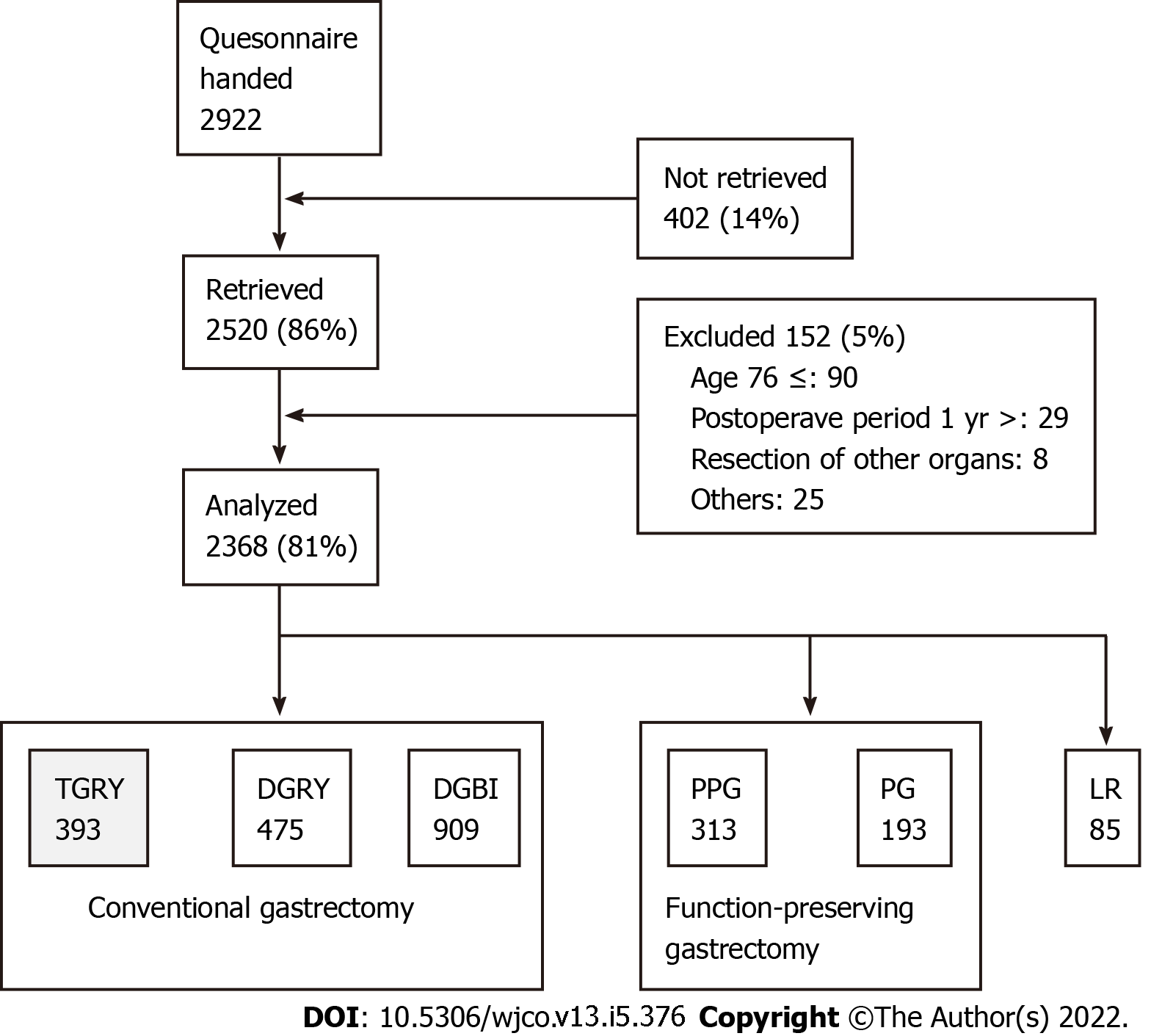 The gastrectomy patients were provided with a PGSAS-45 questionnaire by the surgeon during an outpatient visit. Each patient was asked to complete the questionnaire and mail it to the data center. The clinical data were reported to the data center by the responsible surgeons using case report form and matched to PGSAS-45 responses. All the data were analyzed at the data center. Postgastrectomy daily living was compared among: (1) Elevated route of Roux limb: antecolic vs retrocolic; (2) length of the Roux limb (defined as the distance from esophagojejunostomy to jejunojejunostomy): “shorter (≤ 39 cm)” vs “40 cm” vs “longer (≥ 41 cm)”; and (3) anastomotic procedure for esophagojejunostomy: circular stapler (CS) vs linear stapler (LS) (Figure 2). The study protocol was approved by the institutional review board of each participating institution and registered with the University Hospital Medical Information Network’s Clinical Trials Registry (registration number, 000002116). All patients provided their written informed consent for the confidential use of their information in the data analysis, in compliance with institutional guidelines. 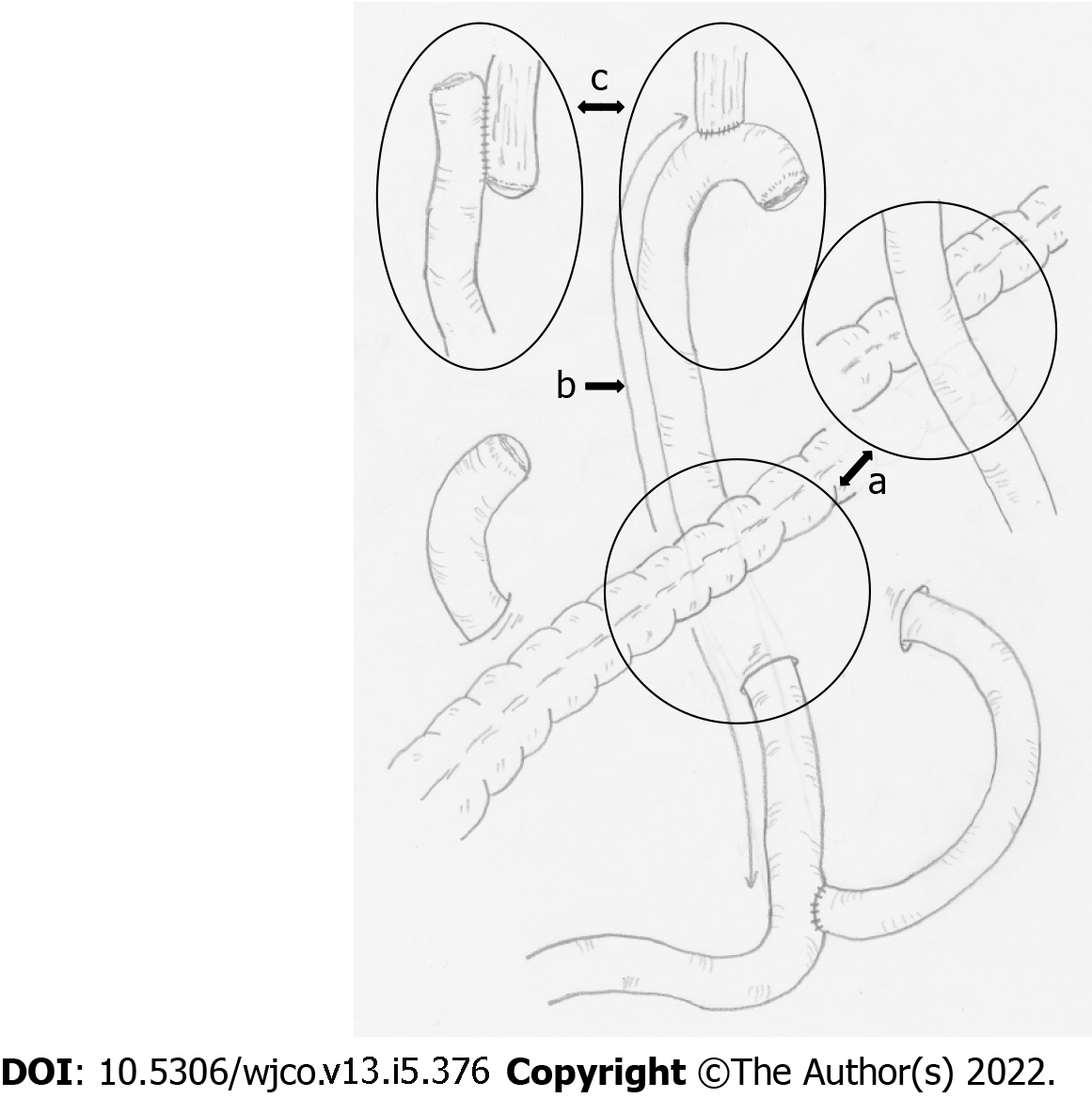 The values are shown as the mean ± SD. Two-group differences in the mean values were analyzed using an unpaired t-test and multiple-group differences were analyzed using one-way analysis of variance (ANOVA). Tukey multiple comparisons test was used when the ANOVA yielded a P value of < 0.1. Generally, a P value of < 0.05 was considered statistically significant. When the P values were < 0.1 in the t-test or Tukey-test, the effect size (Cohen’s d) was calculated. The value of Cohen’s d reflects the impact of each causal variable: values between 0.2 and < 0.5 denote a small but clinically meaningful difference between the groups; values between 0.5 and < 0.8 denote a medium effect; and values ≥ 0.8 indicate a large effect. All statistical analyses were performed using JMP12.0.1 software (SAS Institute Inc., Cary, NC, United States).

Characteristics of the 393 patients are listed in Table 2. The mean age was 63.4 years and the mean postoperative follow-up period was approximately 35 mo. It was observed that the number of male patients was more than the number of female patients and open surgery was more commonly used than laparoscopic surgery. The combined resection of another organ was performed for the gall bladder (83 patients) and spleen (52 patients). Dissection of the lymph node was over D1b in most of the patients. Conversely, celiac branch of the vagus nerve was not preserved in most patients.

Route of the Roux limb

Length of the Roux limb 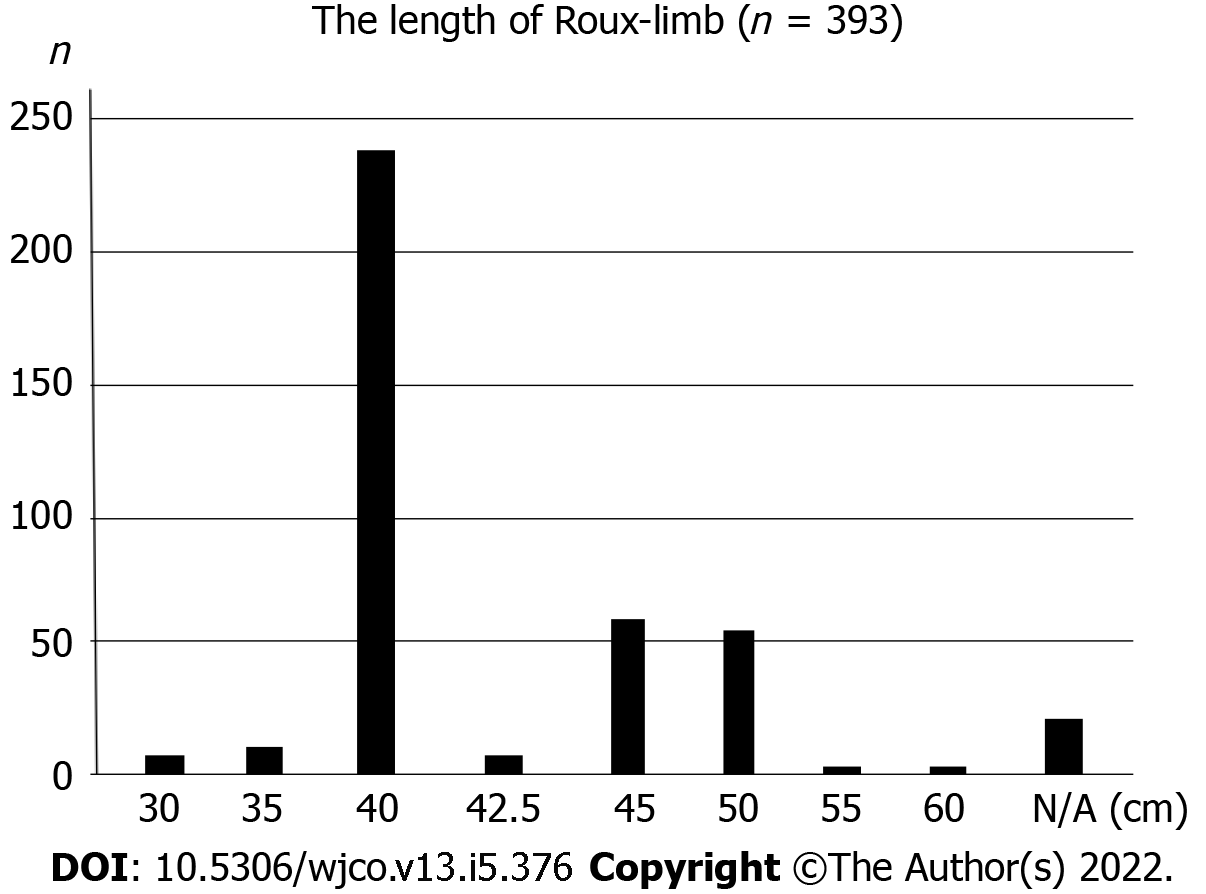 Figure 3 The distribution of the length of Roux-limb after total gastrectomy. N/A: Not answered group indicated.
Anastomotic procedure for esophagojejunostomy

Of the 393 patients, the device used for anastomosis between the esophagus and jejunum was described in 388 (98.7%) patients (Table 5). The CS was used in 348 patients, while the LS was used in 40 patients. Among the 19 main outcome measures of PGSAS-45, there was no difference between the two procedures.

Postgastrectomy syndrome is the severest following total gastrectomy and persists in the long-term; thereby, lowering patients’ QOL[1,2,4,5]. Therefore improvement of surgical techniques to reduce the onset of this syndrome is important. TGRY is a simple and robust technique that is performed widely and regarded as the gold standard for post-total gastrectomy reconstruction. While the increased use of laparoscopic surgery and anastomotic devices has resulted in the diversification of TGRY surgical techniques[6-12], the effects of different TGRY techniques on patients’ QOL remains unknown. Our results indicate that elevation of the Roux limb via antecolic route resulted in fewer esophageal reflux SS, and the relatively “shorter” Roux limb length accompanied by fewer indigestion SS without increasing esophageal reflux SS. In terms of device selection for esophagojejunostomy, no difference was observed between the CS and LS procedures. To the best of our knowledge, this is the first report to demonstrate that differences in surgical techniques in TGRY affect postoperative QOL.

The Roux limb reconstruction in TGRY has often been performed via retrocolic route in open surgeries, as it applies slight tension to the anastomosis due to the short distance to the esophageal stump. With the increased use of laparoscopic surgery, surgeons began elevating the Roux limb via antecolic route due to its technical simplicity[7]. And then, the antecolic elevation became more common even for open total gastrectomy. Our investigation into the effects of different Roux limb reconstruction routes in TGRY on postoperative QOL indicate that esophageal reflux SS was significantly attenuated in the antecolic route group than the retrocolic route group. One of the possible explanation is that in the antecolic reconstruction, duodenal fluid hardly flow back into the esophagus unless it passes over the height of the transverse colon when the patient took the lying-down position. As a result, this physical barrier of gravity could attenuate the esophageal reflux SS in addition to the preventive effect of the peristalsis of the Roux limb. Based on these, the antecolic route may be a suitable surgical procedure when performing TGRY. Although the caution is needed for the occurrence of the internal hernia through Petersen’s defect especially when the gastrectomy underwent laparoscopically, and the implementing preventive methods such as the closure of these defects with sutures[20,21] should be performed.

Many surgeons concern that the insufficient length of Roux limb likely to increase the esophageal regurgitation. However, in the present study, the esophageal reflux SS did not worsened in the “shorter” Roux limb length group compared to the other groups, therefore, even relatively short Roux limbs of 30-35 cm may have produced the sufficient intestinal peristalsis to prevent esophageal regurgitation. Interestingly, significantly more indigestion SS was observed in the “40 cm” and “longer” Roux limb length groups compared to the “shorter” group. This may be, in part, explained by the previous report[22] showing that relatively long Roux limbs could be a cause of Roux-en-Y syndrome. The Roux limb length should be adjusted as an appropriate length, and not too long[22].

Many surgeons had chosen the retrocolic route as that of the Roux limb from the problems concerned with the distance of Roux limb and occurrence of internal hernia, and enough length of the Roux limb preventing the regurgitation to esophagus. The result of this PGSAS study may provide a hint for the optimal surgical procedures after total gastrectomy. A limitation of the present study is its retrospective nature and the unbalanced number of patients in each group. A well-designed prospective study should be conducted in the future.

Our results revealed that the specific surgical technique used for TGRY affects postoperative QOL to some extent. Since postgastrectomy syndrome is the severest following total gastrectomy, a technique that could maintain a favorable postoperative QOL should be selected. The findings of this study suggest that some of the postgastrectomy symptoms following TGRY could be attenuated by elevating Roux limb through antecolic route with not too long Roux limb length.

Although the differences in techniques of Roux-en-Y reconstruction appear to affect postoperative quality of life (QOL), the reasons remain unclear due to lack of sufficient investigation.

We investigated the effect of different techniques on postoperative QOL.

Our results suggest that elevating the Roux limb which is not overly long, through an antecolic route may attenuate some of the postgastrectomy symptoms.

Patients’ QOL after total gastrectomy may be improved by this study.