An increasing number of studies report the beneficial effects of regional hyperthermia in association with chemotherapy (CHT) and radiotherapy for the treatment of pancreatic cancer; in particular, the use of modulated electro-hyperthermia (mEHT) results in increased survival and tumor response.

To compare outcomes of CHT alone or in association with mEHT for the treatment of stage III and IV pancreatic cancer.

This was an observational retrospective study; data were collected for patients with stage III-IV pancreatic cancer that were treated with CHT alone or in combination with mEHT from 2003 to 2019. A total of 158 patients were included in the study out 270 patients screened in four Italian hospitals; 58 (37%) of these received CHT + mEHT and 100 (63%) CHT. CHT was mainly gemcitabine-based regimens in both groups.

The addition of mEHT to systemic CHT improved overall and progression-free survival and local tumor control with comparable toxicity.

Core Tip: Modulated electro-hyperthermia is a relatively new regional hyperthermia method. It targets tumor cell membranes and extracellular matrix to increase their temperature. New studies have appeared in tumor palliation reporting incremental benefits of chemotherapy and radiotherapy and few additional side effects. In patients with stage III and IV pancreatic cancer, modulated electro-hyperthermia in association with chemotherapy results in significant improvements of overall and progression-free survival and tumor response with comparable toxicity.

Pancreatic cancer has one of the worst prognoses in oncology, with a 5-year overall survival (OS) of 9%, and is the seventh most common cause of cancer deaths in the world in 2018[1]. Adenocarcinoma is the main morphology of this tumor (90%), and its incidence and mortality are increased during the last 2 decades[1]. Surgery followed by adjuvant therapy is the only curative treatment of pancreatic tumors; however, only 10%-20% of them are resectable at diagnosis, whereas 30%–40% are locally advanced and 50%-60% are metastatic.

Non-metastatic, locally advanced pancreatic cancer (LAPC) can be treated with neoadjuvant chemotherapy or chemoradiotherapy to allow surgical resection. Gemcitabine in association with nab-paclitaxel and FOLFIRINOX (leucovorin, fluorouracil, irinotecan, oxaliplatin) for fit patients are two current standard first-line options in LAPC, but they have high toxicity and often low efficacy[2-4]. Pancreatic cancer is quite resistant to radiotherapy (RT) and chemotherapy (CHT) because of its hypoxic microenvironment that diminishes sensitivity to these therapies. In order to increase tumor response, the use of regional hyperthermia is often associated to CHT and RT[5]. Regional hyperthermia (RHT) efficacy in cancer remission is well known, indeed, it enhances drug delivery and diffusion inside the tumor cells, improves blood flow, reduces hypoxia, and inhibits DNA repair, resulting in apoptosis[6].

RHT is achieved by increasing the cancer cells’ temperature to 39.5-43 °C with an external device. A new method of RHT has been recently developed: The modulated electro-hyperthermia (mEHT) that is performed with a 13.56 MHz capacitive coupled device. It targets malignant cell membranes and extracellular matrix, allowing to overcome the issue of reaching deep tumors and achieving homogenous heating[7,8]. The mEHT has comparable benefits to other RHT methods and improves survival and local tumor control for several tumors, including pancreatic cancer[9-11].

This was a large retrospective observational multicentric study aimed to compare outcomes of chemotherapy alone or in association with mEHT for the treatment of locally advance pancreatic cancer, in terms of survival and tumor response. Data were collected retrospectively, and patients were selected according to the following inclusion criteria: > 18 years, stage III and IV pancreatic cancer, treatment with CHT alone or in combination with mEHT, and informed consent signed. Patients were excluded from the study if they had a pacemaker, bilirubin, or transaminase level > 3 times the normal value upper range level or bleeding.

From January 2003 to December 2019, 270 patients with stage III and IV pancreatic cancer were screened in four Italian hospitals; 158 of these patients met the inclusion criteria and were included in the study, 58 (37%) of these received CHT + mEHT and 100 (63%) CHT alone. CHT was mainly gemcitabine-based regimens in both groups.

Modulated electro-hyperthermia was performed using the EHY-2000plus device (CE0123, Oncotherm, Torisdorf, Germany), applying a radiofrequency current of 13.56 MHz as carrier frequency that was modulated by time-fractal fluctuation. The energy was transferred by capacitive coupling, with precise impedance matching[12].

The hyperthermia protocol included three mEHT treatments/week for 2 mo, starting at a 60 W power for 40 min. Following treatments were performed by increasing the power up to 150 W and the time up to 90 min in 2 wk. mEHT was administered after CHT or within 48 h, in order to couple the high drug blood concentration with the modulated electro hyperthermia and optimize their synergy.

The majority (95%) of gemcitabine-based treatments were administered on the same day of electro-hyperthermia treatment. In a minority of patients (5%), it was administered the following day or within the following 72 h because of precarious clinical conditions and geographic accessibility. Even if gemcitabine had a half-life of 42-94 min and was eliminated within 5-11 h after infusion, the pharmacokinetic elimination half-life for dFdU varies between 2 and 24 h, and it is still present systemically in concentrations greater than 1 μmol/L up to 1 wk after infusion[13].

Age and survival were reported as median and ranges; frequencies were reported as percentages. Kaplan-Meier non parametric estimates was used for OS and PFS analysis, reporting survival probability on the y axis and time in months on the x axis. Chi square test, Student’s t test, and log-rank test were used for statistical significance, and P ≤ 0.05 was used to indicate statistically significant differences. 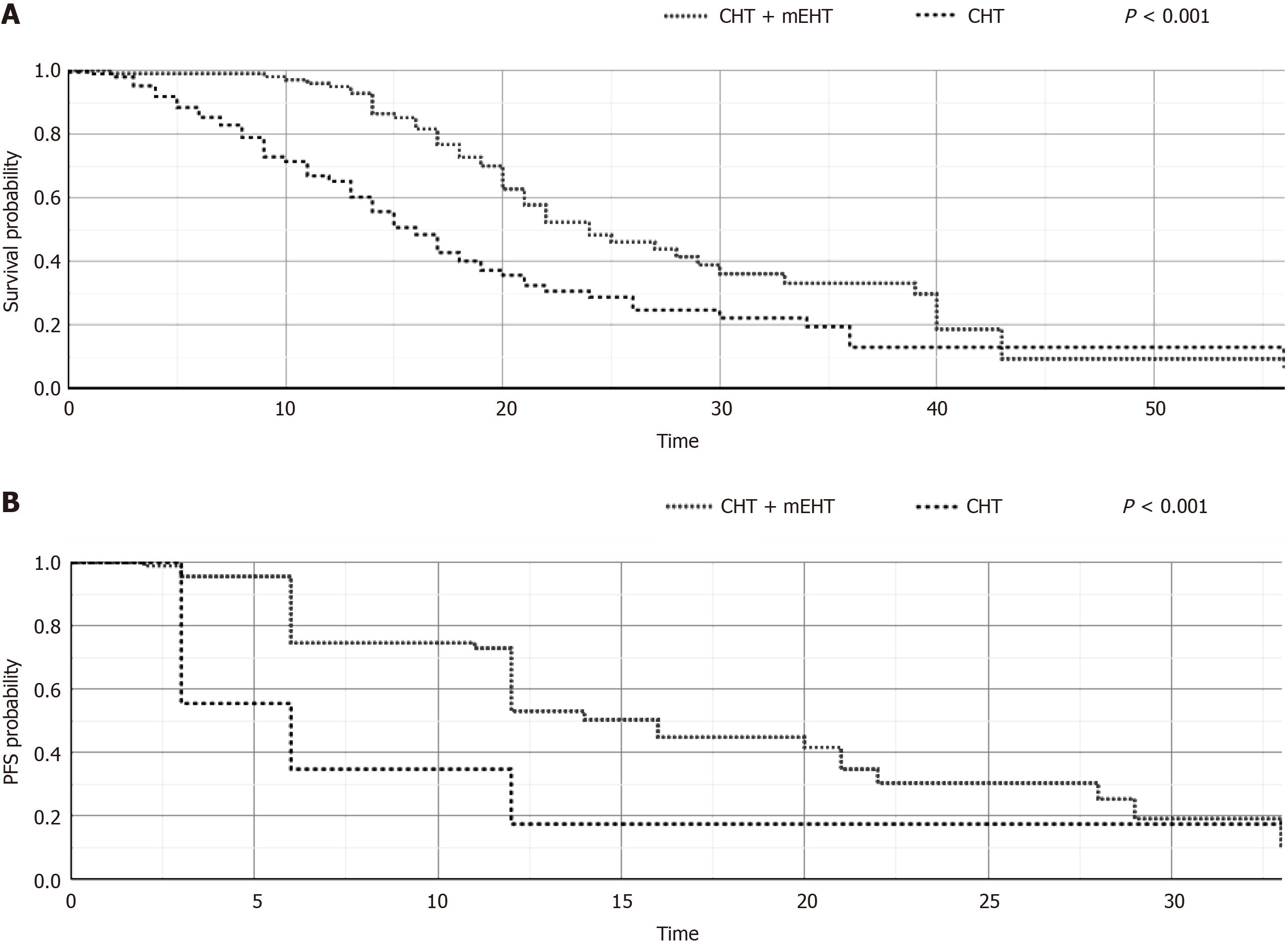 All these side effects were G1-G2 intensity and resolved with local medications and discontinuation of treatment for 1 wk. All patients were evaluated before and after mEHT with electrocardiogram and cardiac ultrasound. No one had cardiac toxicity.

Hyperthermia has been used as cancer therapy for decades, especially for its benefits in enhancing chemotherapy and radiotherapy efficacy[6,14-22]. mEHT has been more recently introduced among hyperthermia methods, targeting malignant cell membranes and the extracellular matrix and overcoming the issue of homogenous tissue heating[7,8]. The efficacy of mEHT was shown for several types of tumors, including pancreatic cancer, increasing tumor response and survival[5,9,15-21].

The beneficial effect of hyperthermia on survival of locally advanced pancreatic cancer was reported if combined with chemotherapy by Tschoep-Lechner, reporting in 23 patients an OS 12.9 mo (95%CI: 9.9-15.9) and a DCR in 16 patients with available CT scans of 50%[20].

Improvements were reported also in tumor response for locally advanced pancreatic carcinoma a consequence of the association of CHT to mEHT with a DCR of 95% that were in agreement with previous data: DCR of 71%-96%[8-11] and resulted higher than that reported by CHT associated with local hyperthermia, showing a DCR of 50%-61%[17-19]. The level of hyperthermia related toxicity was 5% as reported by other studies, showing G2 pain and a skin rash and 5% grade III–IV toxicity[15,18]. These data suggest that RHT increases CRT and CHT benefit both in terms of median OS and in DCR in pancreatic cancer with a low toxicity.

The main limitations of this study were due to the observational nature of this study that resulted in some imbalances distribution between the two subgroups as concerning number of patients and median age, since CHT group had a greater number of subjects (100 vs 58) that were of median older age (69 years vs 64 years) than CHT + mEHT group. Age should not be considered an issue, since the improvement of survival and tumor response was observed also in older patients (> 65 years) with stage III and IV pancreatic cancer[9]. Further prospective, randomized trials on a larger number of patients are required to develop these initial data.

The addition of mEHT to systemic CHT improved OS and PFS and local tumor control with comparable toxicity.

Hyperthermia has been used as cancer therapy for decades, especially for its benefits in enhancing chemotherapy and radiotherapy efficacy. Modulated electro-hyperthermia (mEHT) is a relatively new method of hyperthermia that targets malignant cell membranes and the extracellular matrix, overcoming the issue of homogenous tissue heating.

The efficacy of mEHT is known for several types of tumors, including pancreatic cancer. Pancreatic cancer has a poor prognosis, and the combination of mEHT with chemo- and/or radiotherapy might be important to increase tumor response and improve survival.

The aim of this study was to compare outcomes of chemotherapy (CHT) alone or in association with mEHT for the treatment of locally advanced pancreatic cancer.

Data were collected retrospectively from a cohort of 158 consecutive patients with stage III-IV pancreatic cancer that were treated with CHT alone (63%) or in combination with mEHT (37%) from 2003 to 2019. These data included patients’ characteristics, type of chemotherapy, previous surgery or radiotherapy, tumor response, survival, progression free survival, and adverse events.

The results obtained in this study provided new evidence that mEHT improved survival and tumor response, delaying the progression insurgence. The introduction of mEHT, moreover, did not influence chemotherapy tolerability, and hyperthermia-related adverse events were limited.

This observational study provides further evidence that mEHT association to chemotherapy can enhance its benefit in pancreatic cancer patients. Further studies are required to confirm these results in a large cohort study and to evaluate treatment safety and efficacy.