Pericardial defects are infrequent congenital anomalies due to agenesis caused by premature atrophy of the common cardinal vein or Cuvier duct during the 5th or 6th week of embryonic life. These congenital defects are rare, typically observed as an incidental finding and usually remain asymptomatic. Nevertheless, the more widespread use of modern imaging techniques has contributed to an increase of its incidence in recent years. There is currently no consensus regarding therapeutic options, all of which are based on small retrospective studies that evaluate the risk of developing a life-threatening complication such as herniation and incarceration of the myocardium. We report on a 22-year-old male who presented with sudden onset of sharp chest pain and dyspnea. Computed tomography and cardiac magnetic resonance scan revealed a pericardial defect adjacent to the lateral free wall of the left atrium with associated herniation of the left atrial appendage. The patient was managed conservatively and had an uneventful clinical progress.

We herein present the case of a young male with atypical chest pain and congenital partial absence of the pericardium. A brief discussion on this rare congenital defect with its clinical presentation, diagnostic workup and management is provided at the end of the case report.

A 22-year-old male with no medical background presented to the emergency department with sudden onset of sharp chest pain and dyspnea. There were no other associated symptoms and the physical examination and vital signs were all normal. Blood analysis, including hematology, biochemistry and viral serology, were unremarkable. The chest radiograph showed an apparent horizontalization of the left bronchus and images, suggestive of hilar adenopathies (Figure 1). The electrocardiogram (ECG) demonstrated sinus rhythm at 66 beats per minute with right bundle branch block. The patient was prescribed regular analgesics, with the chest pain subsiding shortly after, and was discharged and referred to the internal medicine outpatient clinic for a diagnosis work-up. In order to further evaluate the findings observed on the chest radiograph and to establish a define diagnosis and the correspondent therapeutic management, a computed tomography (CT) scan was carried out which revealed a pericardial defect adjacent to the lateral free wall of the left atrium (20 mm × 30 mm) with associated herniation of the left atrial appendage. The same findings were confirmed by a cardiac magnetic resonance (CMR) scan (Figure 2). A transthoracic echocardiogram was also performed, with non-specific findings: mild dilatation of right atrium and ventricle, and mild tricuspid regurgitation, with the rest of the examination being normal. Given the uneventful clinical progress, a conservative approach was adopted and the patient was subsequently discharged. To date, 5 years later, he is in good health and remains asymptomatic. 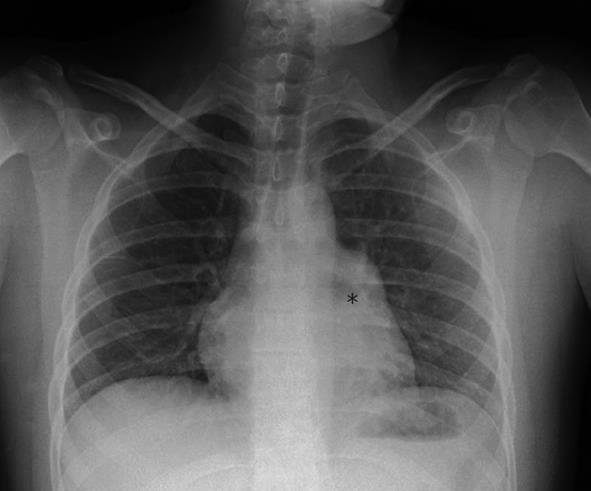 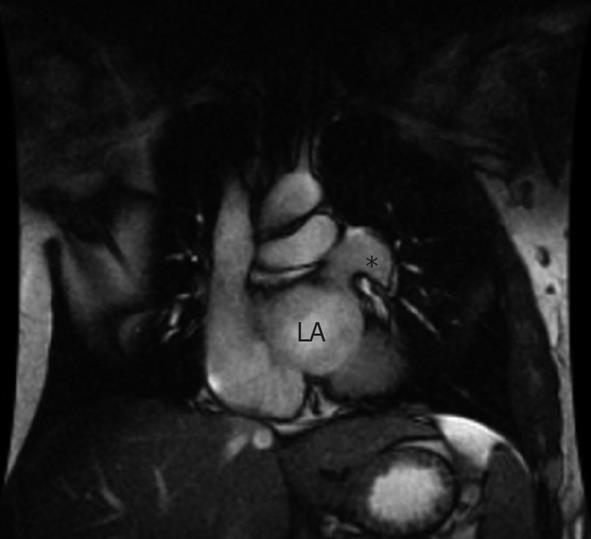 The described pericardial defect is due to agenesis caused by premature atrophy of the common cardinal vein or Cuvier duct during the 5th and 6th week of embryonic life. This leads to reduced blood supply to the pericardial and pleural membranes, preventing their closure. When this defect is small, the result is usually a pleuropericardiac fistula. However, in the case of a larger defect the left lung and the heart may coexist within the same pleural cavity. In most cases, the abnormality has been reported to involve the left lung. Congenital pericardial defects are rare: there are 400 cases reported in the literature so far. It is three times more common in males and, in 30% to 50% of the cases, associated congenital abnormalities (heart, lung, diaphragm and chest wall) have been reported[1,2].

In most instances, the pericardial defect is usually identified incidentally in an asymptomatic patient. Nevertheless, reported symptoms include stabbing chest pain and dyspnea, as in our patient. Complications depend on the extent of the pericardial defect. In general, complete absence of the entire pericardium or of the whole of the left or right side carries an excellent prognosis. A partial pericardial absence, on the other hand, has been reported to carry a higher risk due to potential herniation and strangulation of the atria, appendages or of parts of the ventricles. Furthermore, the herniating structures may compress the great vessels and coronary arteries, which may affect ventricular systolic function and lead to myocardial ischemia, respectively. The physical examination is usually non-specific but may reveal a significantly displaced apical impulse, basal ejection murmurs, apical midsystolic clicks and increased splitting of the second heart sound due to right bundle branch block[1-4].

The ECG in patients with pericardial defects may show typical findings, such as right axis deviation, incomplete or complete RBBB and poor R wave progression due to clockwise rotation in the horizontal plane. The chest X-ray may show characteristic features such as levoposition of the heart, resulting in the absence of the right heart border projecting on the right side of the vertebral column, flattening and elongation of the left ventricular contour (Snoopy sign)[1-4]. The echocardiography exam may be helpful for the initial evaluation of complete absence of the pericardium with features related to the abnormal cardiac position and movement: unusual echocardiography windows, cardiac hypermobility, “teardrop” appearance, paradoxical or flat systolic motion of the interventricular septum, severe tricuspid regurgitation and right ventricle dilatation. However, and as in our patient, the echocardiography exam of partial absence of the pericardium usually provides limited information[5].

Even although the previously discussed diagnostic tools are important in the diagnostic workup, the definite diagnosis of a pericardial defect is made by CMR and CT. Both techniques confirm the diagnosis, visualize the extent of the defect and assess associated complications that are essential for the management of the defect. The CMR is considered the gold standard since it better visualizes the pericardium compared to CT and is also capable of detecting focal myocardial infarctions[5].

There is currently no unanimity with regards to the therapeutic options, all being based on small retrospective series aimed at the evaluation of the risk of suffering life-threatening complications (herniation). A total pericardial left defect carries a small risk and in these patients no surgical treatment is usually necessary. The controversy is related to small and moderate sized left pericardial defects where some advocate prophylactic surgery and others only treating symptomatic patients. The surgical techniques include left atrial appendectomy, division of adhesions, pericardiotomy, enlarging the defect to reduce the risk of incarceration and pericardioplasty which aims to restore the defect either by primary closure or complete reconstruction with synthetic materials. Some reports argue that diagnosis of moderate-sized pericardial defects in symptomatic or nonsymptomatic patients should be followed by prophylactic operation to reduce the risk of death from cardiac structure herniation and incarceration. Postpericardiotomy syndrome is a common reported complication following these surgical procedures[1-4].

In summary, we report a case of a left side partial pericardial defect, a rare cardiac anomaly. Given the uneventful clinical progress that our patient presented with, he was subsequently treated conservatively.