Atrial fibrillation (AF) is the most common clinical arrhythmia with a relevant socioeconomic impact. Patients with AF have symptoms such as palpitations and shortness of breath; they have reduced exercise capacity and are subject to a higher risk of thromboembolic events[1-3]. AF diagnosis is relatively simple when a permanent form is present, but is much more complicated when it is paroxysmal. Indeed, up to 25% of cryptogenic strokes may be due to paroxysmal or undiagnosed AF. Management of AF patients is also difficult because of uncertainties about the optimal therapeutic strategy[4], and the limited efficacy and safety of the most common antiarrhythmic drugs[3,5]. More recent approaches, such as the use of radiofrequency ablation of pulmonary vein firing to reduce arrhythmia triggering or angiotensin-converting enzyme inhibitor therapy targeting the atrial substrate, remain controversial because of the uncertainty of patient selection criteria and the limited efficacy in controlled trials[6-9].

In the last 20 years[1-3], a general consensus has been reached on the fact that AF is not only a simple electrocardiographic diagnosis but rather a clinical disorder in which different factors act as triggers or substrate modifiers and affect the medical history of AF patients (Figure 1). 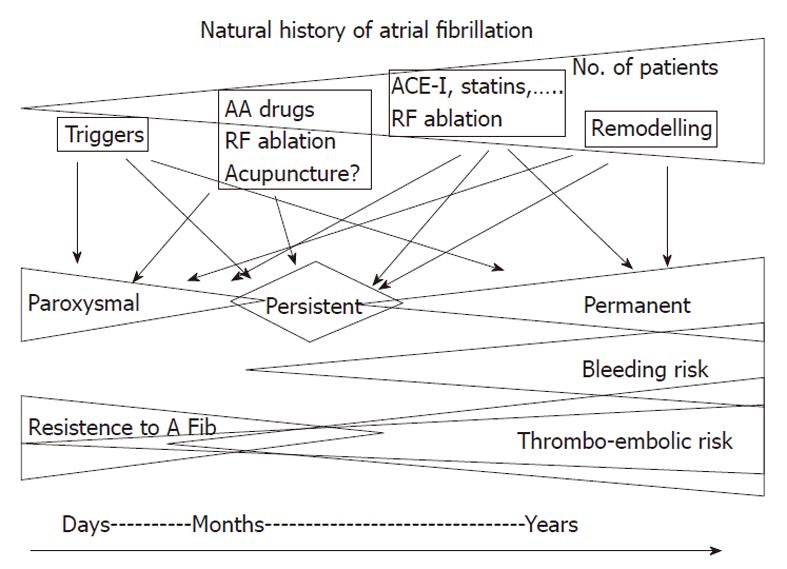 Figure 1 Schematic representation of the temporal changes of the factors that favor or oppose to atrial fibrillation. Initial (left side) triggers play a major proarrhythmic role and need to be targeted by therapeutic interventions. With time and the change from paroxysmal to persistent atrial fibrillation (AF), both triggers and structural alterations become critical and both have to be targeted by therapy. Finally, when structural alterations become extensive and not reversible, AF becomes permanent. The timing of this journey varies from patient to patient and is likely to be related to cardiac and non-cardiac factors. RF: Radio frequency; AA: Antiarrhythmic; ACE-I: Angiotensin converting enzyme inhibitor.

The complexity of the picture and the interaction among different factors may therefore explain the difficulty in managing AF patients and the need for new or alternative therapeutic options[10]. In traditional Chinese medicine[11], stimulation of the Neiguan spot on the meridian of the Minister of the Heart has been extensively used to treat nausea and vomiting. It is also considered to be an essential point in the treatment of cardiovascular pathologies, specifically with regard to disorders of rhythm as well as of the coronary blood flow. Recently also in Western literature, reports have been published supporting the clinical efficacy of acupuncture to treat arterial hypertension[12] and to reduce chest pain[13,14].

Figure 2 Insertion point for acupuncture. The PC-6 (Neiguan in modern Chinese language) spot situated in the heart meridian is indicated by an arrow.

The effects of acupuncture were evaluated in a 12 mo follow-up period in both sets of patients.

In all patients with persistent AF[15], electrical cardioversion restored sinus rhythm without complications. During the following 12-mo observation period, 35 of 80 patients enrolled in the study experienced a recurrence of AF with a cumulative incidence of 43.8%. In comparison with controls, Neiguan spot puncturing was associated with a significant reduction in the AF recurrence rate. The cumulative proportion of patients with AF recurrences was 35% in the active acupuncture group, 27% in the reference group of patients treated with amiodarone, and was significantly smaller than in patients with no antiarrhythmic drugs (54%) or treated with sham acupuncture (69%).

As indicated in Figure 3, there was a significant difference between the 2 active treatment groups (amiodarone or acupuncture) and the 2 control groups (sham acupuncture and no antiarrhythmic drugs). Among clinical or echocardiographic parameters, only left atrial diameter, history of hypertension and left ventricular ejection fraction were significantly associated with AF recurrence. 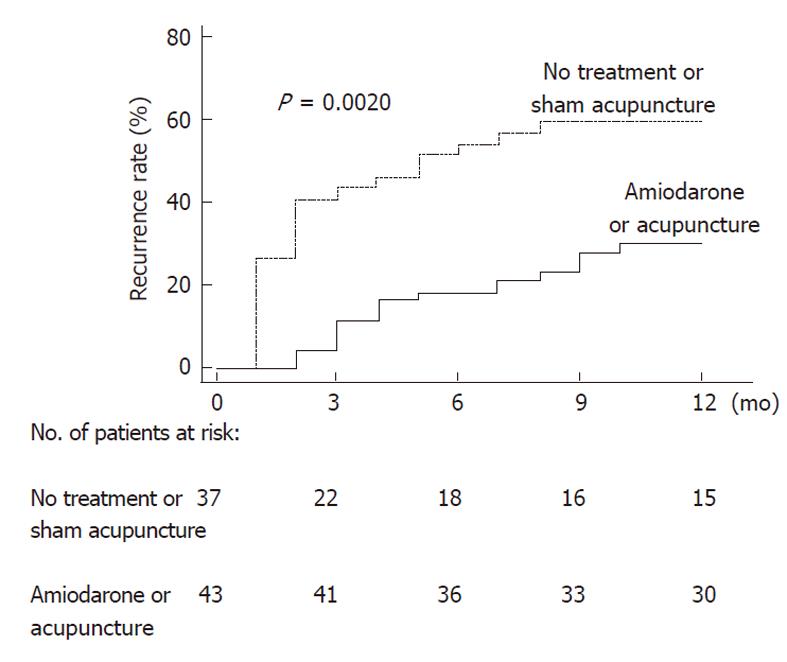 When considering patients with paroxysmal AF, we measured the number and duration of symptomatic episodes in order to determine the arrhythmic burden (average number and duration in minutes of AF episodes for each patient) and compared the control period with the first 2 mo after acupuncture and an additional 10 mo follow-up period. As illustrated in Figure 4, acupuncture was associated with a significant reduction in the number of AF episodes from a median of 15 [interquartile range (IQR), 6-50] to 2 (IQR, 1-10; P = 0.0018) and in AF burden from 100 (IQR, 30-180) to 6 (IQR, 1-20; P = 0.0002). The antiarrhythmic effect of acupuncture persisted during the 10-mo follow-up period. 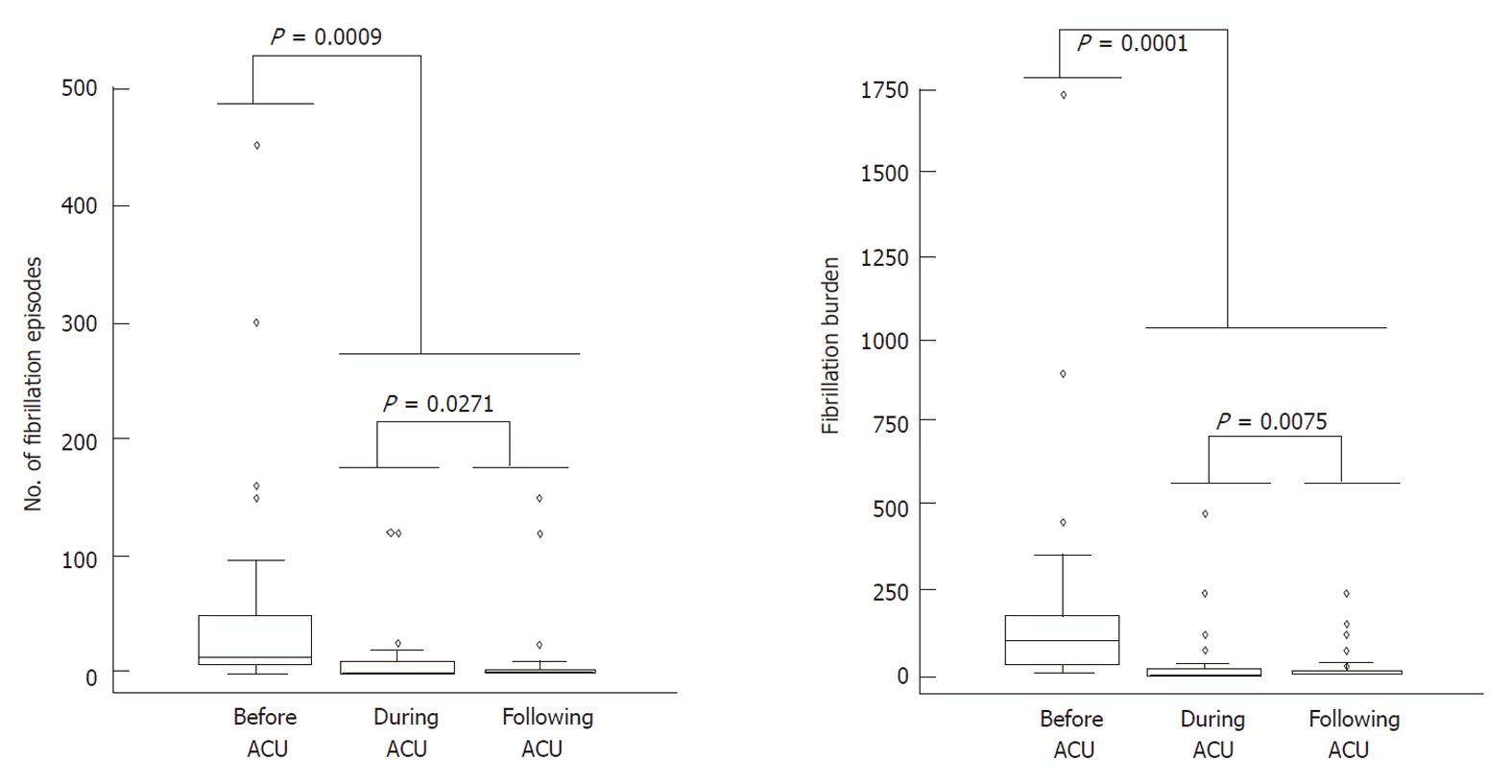 Acupuncture treatment did not cause bleeding, hematoma or infection. No pain or vaso-vagal reactions were reported with needle insertion.

HOW TO EXPLAIN THE OBSERVED RESULTS
Possible effects of Neiguan puncturing

These findings indicate that acupuncture of the Neiguan spot exerts an antiarrhythmic effect similar to that of amiodarone in patients with persistent AF and is additive to common antiarrhythmic drugs in patients with symptomatic paroxysmal AF. Although these results deserve confirmation in a larger patient population, they are, in our opinion, of relevant physiopathological and clinical interest and open new perspectives in the management of AF patients in relation to traditional and Western medicine.

In the Traditional Chinese Medical Doctrine[11,21], AF, like most supraventricular arrhythmias, is related to Heart Yin deficiency in the absence of structural disorders or to Heart Yang deficiency in the presence of a cardiac disease. The Neiguan spot is located in the portion of the heart meridian situated in the forearm and is responsible for blood flow and pulse rate control. Its malfunction has been associated with anxiety and restlessness and cardiac pain.

In the Western world, puncturing of the Neiguan spot has been used to treat chest pain, sickness and vomiting during chemo-embolization procedures[22] and to limit the symptoms related to fullness-tension in the chest and palpitations[23]. Reductions in the electrocardiographic signs of myocardial ischemia and plasma levels of endothelin have also been reported[23,24].

Electroacupuncture of the Neiguan spot has also been associated with an effect on the autonomic nervous system and, in particular on the sympatho-vagal interaction[25,26]. In one of the first studies, Kong et al[27] was able to restore a more physiological sympatho-vagal balance after acupuncture by measuring heart rate variability. More recently, however, in a systematic review[28] in which the effects of acupuncture on heart rate variability were studied in different patient populations and experimental conditions, contrasting results were observed. For example in healthy subjects, acupuncture determined a significant attenuation of signs of sympathetic activation and reduced vagal modulation induced by a stress state in comparison to sham acupuncture[29]. Other studies, however, failed to detect similar changes in heart rate variability parameters when subjects were exposed to mental stress testing or other stressors[28]. On the other hand, Flachskampf et al[12], reported that 6 wk of acupuncture significantly lowered median 24-h ambulatory blood pressure and that the effect was no longer present after cessation of acupuncture treatment.

The possibility that acupuncture may exert its antiarrhythmic effect through an action on the autonomic nervous system is therefore a plausible hypothesis although not tested in our studies. Indeed, several clinical and experimental reports have indicated that an imbalance of autonomic control mechanisms due to either an increase in vagal or sympathetic neural activity directed to the heart may favor the initiation and maintenance of AF episodes[1,2]. In patients who developed AF during Holter recordings[30,31], signs of either an increased vagal or sympathetic modulation of the sinus node were commonly detected in the minutes preceding AF initiation: a finding that in our opinion, suggests that an imbalance between the two branches of the autonomic nervous system rather than a specific predominance of one component is the most important pro-arrhythmic factor.

The possibility that the antiarrhythmic effect of acupuncture might be related to a stabilization of sympathetic and vagal control mechanisms rather than to a direct antiadrenergic or vagomimetic effect is therefore appealing and is substantiated by recent experimental findings. In fact, whereas direct high threshold cardiac vagal ganglia stimulation has been associated with a pro-fibrillatory effect[32,33], bilateral low-level vago-sympathetic nerve stimulation has been found to suppress effectively high-frequency stimulation-induced focal AF at atrial and pulmonary vein sites[34-36]. Whether acupuncture of Neiguan spot might exert similar effects on cardiac autonomic ganglia remains to be determined and at the moment it is an interesting hypothesis.

When we consider patients treated with acupuncture, few additional considerations appear of interest. In patients with persistent AF, the antiarrhythmic effect of acupuncture was particularly evident in the first weeks after cardioversion, i.e., the period with the highest recurrence rate[38] where autonomic mechanisms may play a major pro-arrhythmic role[39]. Unfortunately, our study does not allow us to infer the possibility that, in patients with early AF recurrence but already on antiarrhythmic drugs, acupuncture might exert an additive antiarrhythmic action. This possibility, however, is suggested by the results obtained in patients with paroxysmal AF. Most of these patients were on propiophenone, flecainide or amiodarone. Puncturing of the Neiguan spot resulted in a significant reduction of the arrhythmic burden that persisted during the whole follow-period. Even taking into account the small number of patients treated with acupuncture and the fact that only symptomatic episodes were measured, one could hypothesize that acupuncture could enhance the antiarrhythmic efficacy of these drugs by a combination effect on atrial electrical properties and autonomic mechanisms.

Finally, it has to be mentioned that acupuncture was safe, without any pro-arrhythmic effect and with limited cost. All these factors should be considered when evaluating the efficacy of therapeutic intervention for an epidemic disease as AF.

These data were obtained in 2 small study populations and the recurrence rate was documented during control visits or by the patients’ perception of symptoms. In particular, when considering data obtained in patients with paroxysmal AF, it must be pointed out that the numbers were small and that patients were treated with different antiarrhythmic drugs, and no sham acupuncture was used to rule out a placebo effect. Nevertheless, the persistency of the antiarrhythmic effect of acupuncture on symptomatic AF during the 10-mo follow-up period make this possibility unlikely. It must be also stated that for economic reasons we were unable to use a trans-telephonic monitoring system or internal or external loop recorders to detect asymptomatic or brief self-terminating AF episodes. Finally, this was a single center study with an active acupuncture team led by a cardiologist with a recognized training in traditional Chinese Medicine.