METHODS: Seventy-eight men (mean age, 57 years) with chest pain and angiographically normal coronary arteries were included in the study. Patients with coronary spastic angina were excluded. Changes in coronary artery diameter and coronary blood flow (CBF) in response to acetylcholine (ACh) were determined using quantitative coronary angiography and Doppler velocity measurements. Coronary flow reserve was calculated as the ratio of coronary blood velocity after adenosine triphosphate infusion relative to baseline values. Patients were divided into two groups based on the presence or absence of MS.

RESULTS: There were 24 patients in the MS group (31%). The increase in CBF in response to ACh infusion was impaired in the MS group (P < 0.0001) compared to the non-MS group, whereas changes in coronary artery diameter in response to ACh infusion did not differ between the two groups. Multivariate regression analysis revealed that MS was a significant factor associated with the lesser change in CBF induced by ACh infusion at 30 μg/min (P < 0.0001, r2 = 0.46).

CONCLUSION: Coronary endothelial dysfunction was present at the level of resistance vessels but not conduit vessels in the MS patients included in our study.

The metabolic syndrome (MS) is characterized by abdominal obesity, elevated blood pressure, hypertriglycemia, low high-density lipoprotein (HDL) cholesterolemia, and hyperglycemia[1]. Several studies have revealed that MS is a factor that may be responsible for future cardiovascular events, independent of racial differences[2-6].

Studies have also indicated the presence of endothelial dysfunction assessed using several modalities, such as positron emission tomography, flow-mediated dilation in the brachial artery, and venous occlusion plethysmography, in MS patients[7-13]. However, no studies have investigated coronary endothelial function using quantitative coronary angiography and Doppler velocity measurements, which can provide insight into the dynamic biology of the endothelium of coronary arteries at the level of conduit and resistance vessels and can also provide prognostic information for risk stratification in the later clinical phase[14,15]. Therefore, we investigated the relationship between coronary endothelial function at the level of conduit and resistance vessels and the presence of MS in patients with chest pain and angiographically normal coronary arteries.

All anti-anginal agents were discontinued at least 48 h prior to catheterization, except for the unrestricted use of sublingual nitroglycerin, which was withheld for 1 h prior to catheterization. Diagnostic left heart catheterization and coronary angiography were performed using a standard percutaneous brachial approach. A 6F guide catheter was introduced into the left main coronary artery. A 0.0014-inch Doppler flow guidewire (Volcano FloWire; Volcano Therapeutics Inc., Rancho Cordova, CA) was advanced through the guide catheter into the proximal segment of the left anterior descending coronary artery. The wire tip was positioned in a straight segment of the vessel to obtain a reliable flow-velocity signal.

After baseline control conditions were established, incremental doses of acetylcholine (ACh) were infused into the left coronary artery (3 μg/min and 30 μg/min) for 2 min with 5-min intervals between consecutive doses. After re-establishment of control conditions, nitroglycerin was infused intracoronarily at the rate of 200 μg/min for 1 min. Finally, adenosine triphosphate (20 μg) was infused. ACh and nitroglycerin were infused directly into the left coronary ostium using an infusion pump (TE-311; Terumo, Tokyo, Japan) at the rate of 1 mL/min.

The method for measuring coronary diameter has been previously described in detail[16,17]. The coronary segment 2 mm distal to the Doppler wire tip was selected for quantitative analysis. In each patient, luminal diameters of selected segments of the left anterior descending coronary artery were measured by a single investigator blinded to angiographic and clinical data in order to determine the effects of different drugs on epicardial coronary diameter. Luminal diameters were measured on an end-diastolic frame using a computer-assisted coronary angiographic analysis system (CAAS II/QUANTCOR; Siemens, Berlin and Munich, Germany). Means of triplicate measurements of luminal diameter were used for analysis. Changes in coronary diameter in response to ACh and nitroglycerin infusions are expressed as percent change from the baseline measurement on the angiogram obtained prior to infusion. Intra- and inter-observer variability have previously been reported to be excellent[18].

CBF was calculated as the product of CBF velocity and vessel diameter using the following formula: π× average peak velocity × 0.125 × diameter2. For CBF calculations, the internal diameter of the vessel at the location of the flow measurements (2 mm distal to the wire tip) was measured using the method described above. CFR was calculated as the ratio of CBF velocity after an adenosine triphosphate infusion to the baseline velocity.

The definition of metabolic syndrome

The presence of MS was determined according to the final report of the National Cholesterol Education Program’s Adult Treatment Panel III criteria[1]. The above-mentioned criteria may not be suitable for determining abdominal obesity in Japanese patients; therefore, we adopted the Japanese criteria for abdominal obesity (waist circumference ≥ 85 cm in men) in the present study. Consequently, we defined MS as the presence of at least three of the following factors: (1) waist circumference ≥ 85 cm; (2) fasting triglycerides > 150 mg/dL; (3) HDL cholesterol < 40 mg/dL; (4) hypertension (systolic blood pressure ≥ 130 mmHg and/or diastolic blood pressure ≥ 85 mmHg, or use of antihypertensive drug therapy); and (5) fasting glucose ≥ 110 mg/dL. The patients were divided into the following two groups based on the presence or absence of MS: the MS group comprising patients with MS and the non-MS group comprising patients without MS. In addition, the MS score was defined as the sum of the MS factors (0-5) that were present.

All data were expressed as mean ± SE. Baseline characteristics of the two groups were compared with Student’s unpaired t-test or by χ2 analysis, as appropriate. Serial changes in hemodynamic variables and changes in coronary vasoreactivity in response to drug infusion were compared using a one-way analysis of variance. If the analysis of variance showed a significant difference between means, the level of significance was determined by contrast analysis. Serial percent changes in the coronary vascular response to ACh infusion were compared between groups using a two-way analysis of variance. We used Spearman’s rank correlation to investigate the relationship between the MS score and change in CBF induced by ACh infusion. We performed uni- and multivariate regression analyses to identify factors associated with percent changes in CBF induced by ACh. A P value < 0.05 indicated statistical significance.

Data for other conventional risk factors, including biochemical parameters and medications taken, are also indicated in Table 2. The triglyceride, fasting blood sugar, hemoglobin A1C, and HOMA-IR levels were higher in the MS group and the level of HDL cholesterol was lower in the MS group compared with the non-MS group. The frequency of medication intake was similar in the two groups.

The results of hemodynamics and coronary vasoreactivity are indicated in Table 3. The mean blood pressure was higher in the MS group. The baseline coronary artery diameter and CBF were similar in the two groups. Changes in coronary artery diameter in response to ACh infusion and NTG-induced coronary dilation also did not differ between the two groups (Figure 1 and Table 3). However, the increase in CBF in response to ACh infusion was impaired in the MS group compared to the non-MS group (P < 0.0001, Table 3 and Figure 2). However, CFR did not differ between the two groups (Table 3). Statistical significance between the MS and non-MS groups was more prominent in percent change in CBF induced by ACh infusion at a dose of 30 μg/min, and subsequent analyses were performed using this value. The total MS scores were negatively associated with the increase in CBF in response to infusion of ACh at 30 μg/min (r = -0.51, P < 0.0001, Figure 3). 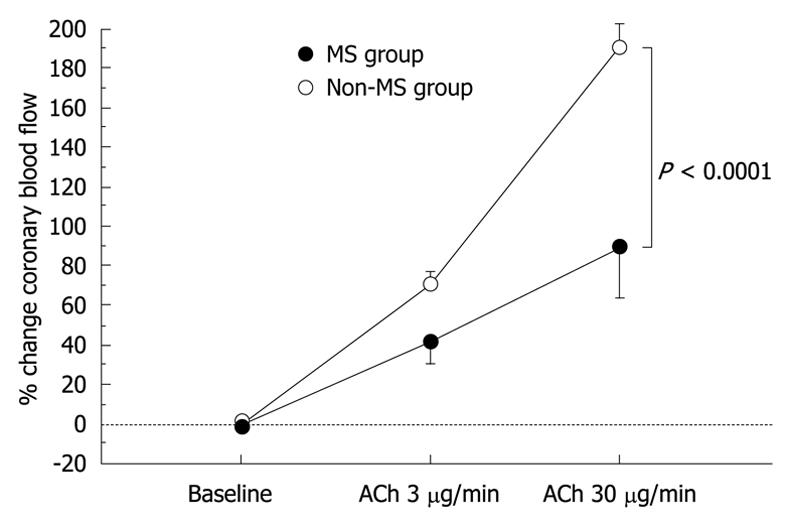 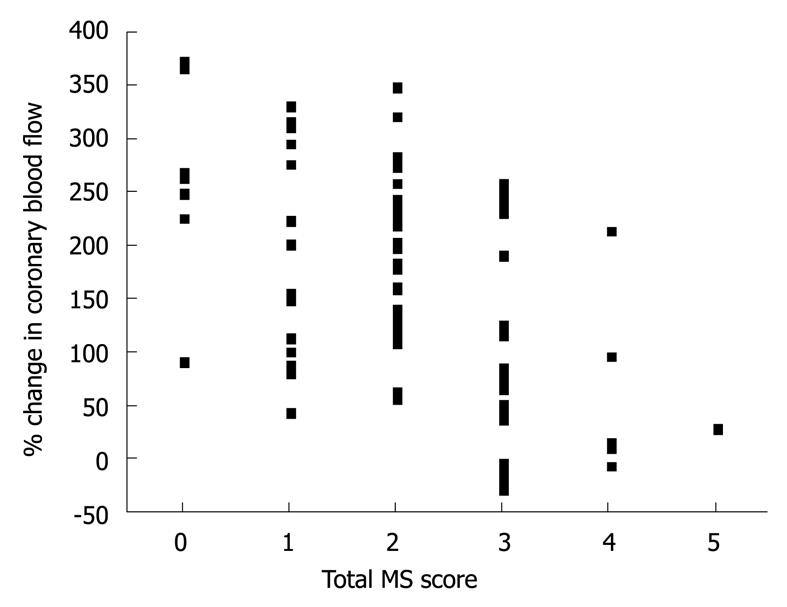 There are several limitations to the present study. First, all the patients in our study had chest symptoms and had undergone coronary angiography; thus, they may represent a specific group. In addition, MS patients met the minimal criteria for MS and several non-MS patients also had a moderate MS score. Therefore, the results of the present study may not always represent endothelial function in all MS patients. Second, our data showed that CFR was not different in the two groups. However, we excluded patients with a CFR < 2.0 and/or LVH in order to accurately measure ACh-induced coronary circulation. However, in general, many such patients may be regarded as MS patients. If we had added them in the MS group in the present study, CFR in the MS group might have been lower than that in the non-MS group. There have been many studies showing impaired CFR in patients with MS[19,27] and we do not mean to imply that CFR is preserved in MS patients. Finally, we did not measure biochemical parameters associated with MS, such as adiponectin, interleukin-6 and tumor necrotizing factor-α. Therefore, we cannot report on the precise mechanisms of MS-induced coronary microvascular endothelial dysfunction in the present study.

The purpose of the present study was to assess the coronary endothelial function of the conduit and resistance vessels in patients with MS and angiographically normal coronary arteries.

This is an interesting study confirming previous findings on how MS affects coronary function.