Intra-atrial right coronary artery (RCA) is a rare and generally asymptomatic anomaly of development of the coronary arteries. This malformation could potentially expose the patient to a catastrophic outcome in the case of injury during interventional or surgical procedures. Currently, only a few case reports and no systematic reviews are available in the literature.

We report the case of a 54-year-old man with atypical chest pain who underwent multi-detector computed tomography angiography (MDCTA). The exam revealed no significant coronary artery stenoses; however, an intra-atrial course of mid RCA was evident. Medical therapy was administered, and the patient was discharged to home without undergoing a conventional angiography. Previously reported autoptic and clinical cases were retrieved from the PubMed literature database to compare the clinicopathological features of this case.

MDCTA depicted the abnormal course of the coronary artery in this patient as an intra-atrial course of the mid RCA. Finding this abnormality was crucial to avoid an inadvertent injury during interventional or surgical procedures.

Core Tip: We present a rare case of an intra-atrial course of the mid right coronary artery (commonly referred to as right coronary artery) detected by multi-detector computed tomography angiography (MDCTA). We performed a systematic review of the few cases in the literature. Since this anomaly could potentially expose the patient to catastrophic outcome in case of injury during interventional or surgical procedures, its recognition via MDCTA is crucial before such interventions.

Intra-atrial or intra-cavitary course of the right coronary artery (RCA) is defined as a segment of the RCA that courses through the right atrial (RA) chamber[1,2]. It is a relatively rare vascular anomaly, with a reported incidence of 0.09%-0.1%[1,2].

Historically, this anomaly of development was most often identified by accident, during coronary surgery or autopsy, due to its benign outcome; however, in the era of multi-detector computed tomography angiography (MDCTA), it is now detected more frequently, and its incidence rate has risen to 1.8%[1]. From a radiological point of view, it was defined as a segment of RCA entirely surrounded by intra-atrial contrast in all phases of the cardiac cycle, unlike the myocardial bridge, in which a segment of the coronary artery appears as entirely surrounded by myocardial muscle[1,2]. Its recognition is very important before cardiac surgery or endocavitary procedures (i.e. ablation for arrhythmias, catheterization of the RA, and pacemaker implantation) since it carries a concerning potential for injury to the intra-atrial RCA, which could have a catastrophic outcome[1].

Herein, we report the case of a patient with an anomalous course of the RCA through the RA which was identified using MDCTA. Furthermore, to the best of our knowledge, we provide, for the first time, a discussion based on a review of all cases of intra-atrial course of RCA in the literature. The review was conducted according to the guidelines of the Declaration of Helsinki and approved by the Ethics Committee of the University of Padua.

The patient reported that the symptoms had started 2 h before presentation, describing atypical chest pain without dyspnea.

The past history of the patient was unremarkable.

The patient denied any personal history relevant to atypical angina, dyspnea, or other cardiovascular symptoms and any family history of cardiovascular disease.

On physical examination, the significant vital signs were as follows: body mass index of 28.7 kg/m2; heart rate at regular pulse of 80 beats per min; and blood pressure of 163/92 mmHg. Dyspnea, heart murmurs, and other signs of heart failure were absent.

Levels of myocardial injury enzymes (i.e., troponin T and creatine kinase) were normal. Electrocardiography demonstrated a sinus rhythm of 77 beats per min and absence of ST depression with minimal alterations in lateral repolarization.

From the scans, mild coronary calcification (Agatston calcium score of 34) of the left anterior descending (LAD) coronary artery, without significant stenoses (> 70%) of all segments, was detected. Additionally, an abnormal course of the mid RCA was identified. As demonstrated by axial images and CT multiplanar reconstruction, the origin and the proximal tract of the RCA were normal, with an epicardial course in the right atrio-ventricular groove; however, the artery penetrated the anterior RA wall and then exhibited an intracavitary course of 25 mm (Figure 1). After the exit from RA, the RCA passed normally in the atrio-ventricular groove and then continued normally at the level of the diaphragmatic crux. 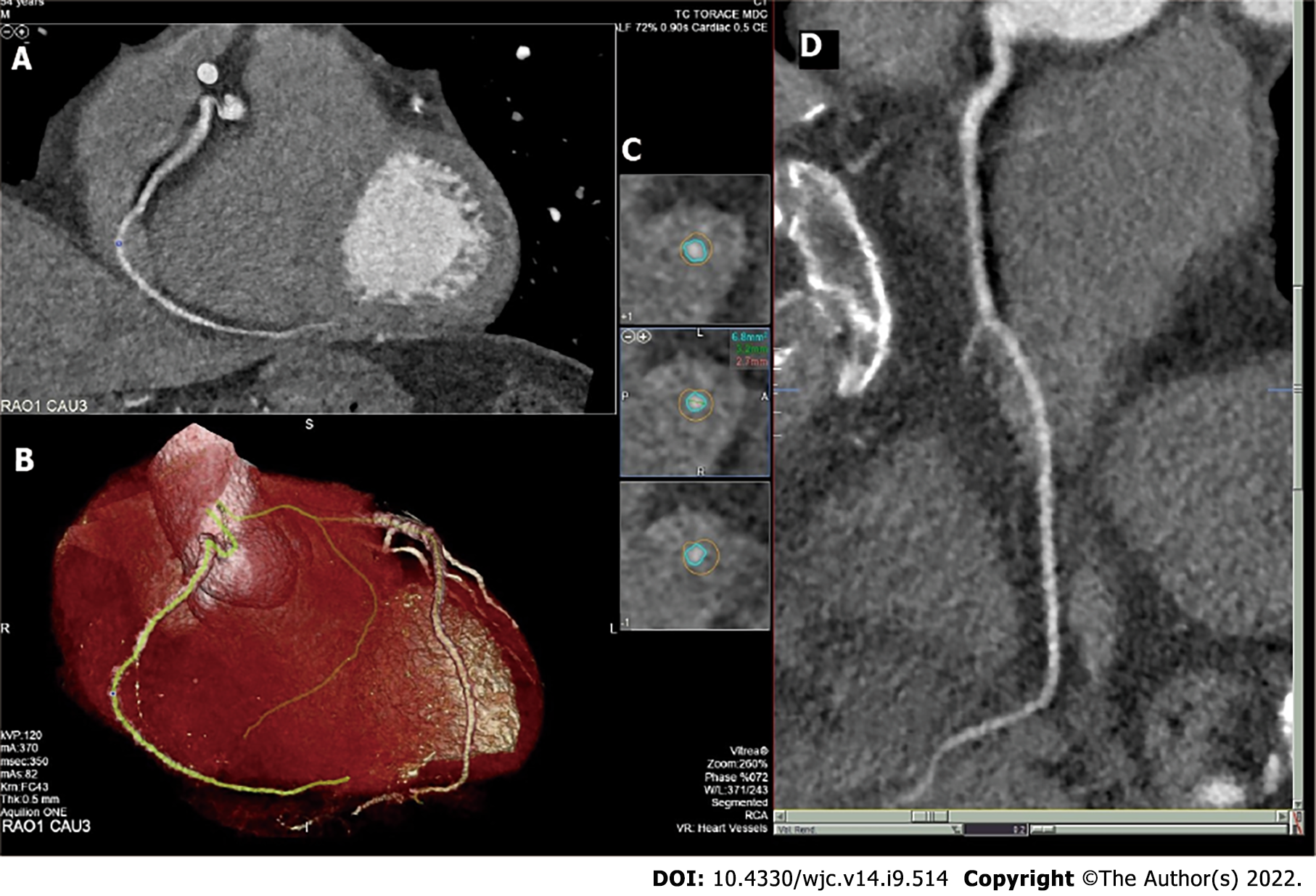 Considering the patient's medical history along with the MDCTA imaging findings, the final diagnosis was an intra-atrial course of the mid RCA without significant coronary atherosclerosis.

The patient responded well to standard medical therapy (i.e., rosuvastatin, administered at 5 mg per day) and was discharged home on postoperative day 2 without having to undergo a conventional angiography study.

At the last follow-up (5 mo postoperatively), the patient was still alive.

An intra-atrial course of RCA was first described in 1975 by McAlpine[27]. The prevalence of this variant was initially reported to be between 0.09% and 0.1%[5-7], but these rates probably represented underestimations because the conventional angiographic luminographic 2D assessment may not be able to recognize this abnormal variant. The most recent studies – involving cases that are being diagnosed by the new advanced imaging techniques – have reported a prevalence of 1.3%[2] and 1.8%[4]; certainly, the increasing use of MDCTA of the coronary arteries will lead to an even greater increase in identification of this anomaly[8].

In our review of the literature, most cases were female, and the patient’s ages ranged from 45 years[20] to 78 years[13]. In none of the cases was there presence of significant coronary artery stenoses nor were mild atherosclerotic plaques indicated[9]. A possible explanation could be the absence of mechanical stress on the segment of the coronary artery when it coursed intra-atrially or intra-myocardially rather than in the epicardial fat, although this conclusion is not definitive[9].

Association between the intra-cavitary course of the RCA and other coronary anomalies have been described, such as with the intramuscular course of the LAD coronary artery or with the anomalous origin of the left circumflex (commonly known as LCX) coronary artery from the right aortic sinus[9]. Patients with intra-cavitary course of the RCA were usually asymptomatic, and its discovery was incidentally encountered during an MDCTA coronary study conducted for other reasons (i.e., atypical chest pain, chest tightness, dyspnea, palpitation, atrial flutter or fibrillation, arrhythmia, fainting, hypotension, or syncope) (Table 1).

An intracavitary course of the RCA has a higher probability of iatrogenic damage than myocardial bridging because of the risk of direct injury at the abnormal vessel segment during surgical manipulation or endoatrial procedures (i.e., ablation, catheterization, or electrode implantation). Therefore, although it is usually considered an asymptomatic variant, its early recognition is crucial to avoid vessel catastrophic lesions during such procedures[2].

MDCTA is a less invasive and less user-dependent method than conventional angiography and can accurately depict the coronary vasculature and its variants of origin, termination, or course[2]. The recognition of an intra-atrial course of the RCA by MDCTA could facilitate avoidance of potential hazards during surgical and/or interventional procedures.