Catheter-based closure of patent foramen ovale (PFO) is more effective than medical therapy in the prevention of recurrent stroke[1]. It is likely that a proportion of patients evaluated for potential transcatheter PFO closure has actually different anatomical variants particularly common in the right atrium such as eustachian valve, Chiari network, Thebesian valve and Crista Terminalis. Notably, the eustachian valve may represent an increased risk factor for left circulation thromboembolism beyond that associated with PFO size and shunting. Such patients may benefit the most from percutaneous closure procedure.

Core Tip: Eustachian valve is usually considered to be a benign finding in the absence of associated cardiac anomalies. Moreover, eustachian valve is frequently found in adult patients with septal abnormalities mainly patent foramen ovale. It may actively facilitate the mechanism of paradoxical embolism by directing the blood from the inferior vena cava towards the interatrial septum via patent foramen ovale into the left atrium. Therefore, the presence of such anatomic variant may represent per se an increased risk factor for left circulation thromboembolism.

Bartolomeo Eustachio (San Severino Marche, Macerata 1507 (?)–Fossato di Vico, Perugia, Italy, 1574), also known by his latin name of Eustachius, was an Italian anatomist and one of the founders of human and comparative anatomy. He had a comprehensive humanistic education, in the course of which he acquired an excellent knowledge of Greek, Hebrew and Arabic. Eustachio's greatest contributions to anatomical science passed through many vicissitudes which kept his real merit from being recognized until long after his death. His greatest work, which he was unable to publish, is the “De dissensionibus et controversiis anatomicis” illustrated in the Anatomical Engravings (Tabulae). Engraved on copper plates, these tables illustrated the results of the dissections of Eustachio and were completed in 1552 but discovered only in the early eighteenth century-after 162 years-in the possession of a descendant of Pier Matteo Pini to whom Eustachio had bequeathed them. They were later purchased by Pope Clement XI for 600 scudi and presented to Giovanni Maria Lancisi, his physician and the successor to Eustachio in the chair of anatomy at the Sapienza in Rome. Lancisi published the plates in 1714, together with the eight smaller ones that had already appeared in 1564[2,3] (Figure 1). Although devoid of Eustachio’s planned text, the plates alone assured him a distinguished position in the history of anatomy. The fact that his book became a bestseller more than a century after his death shows the extent of the religious restrictions on anatomists all through the Renaissance. In his work on the azygos vein and its ramifications (Opuscula Anatomica, 1564), Eustachio described the thoracic duct and particularly the “valvula venae cavae inferioris” (known as Eustachian Valve) that lies at the junction of the inferior vena cava and right atrium which serves to direct the blood through the foramen ovale into the left atrium, indicating a careful and relatively advanced knowledge of heart’s structure. His description of the fetal circulation was the most complete up to his time. This constitutes the most important distinctive structural difference between the circulatory apparatus of the adult and the child. 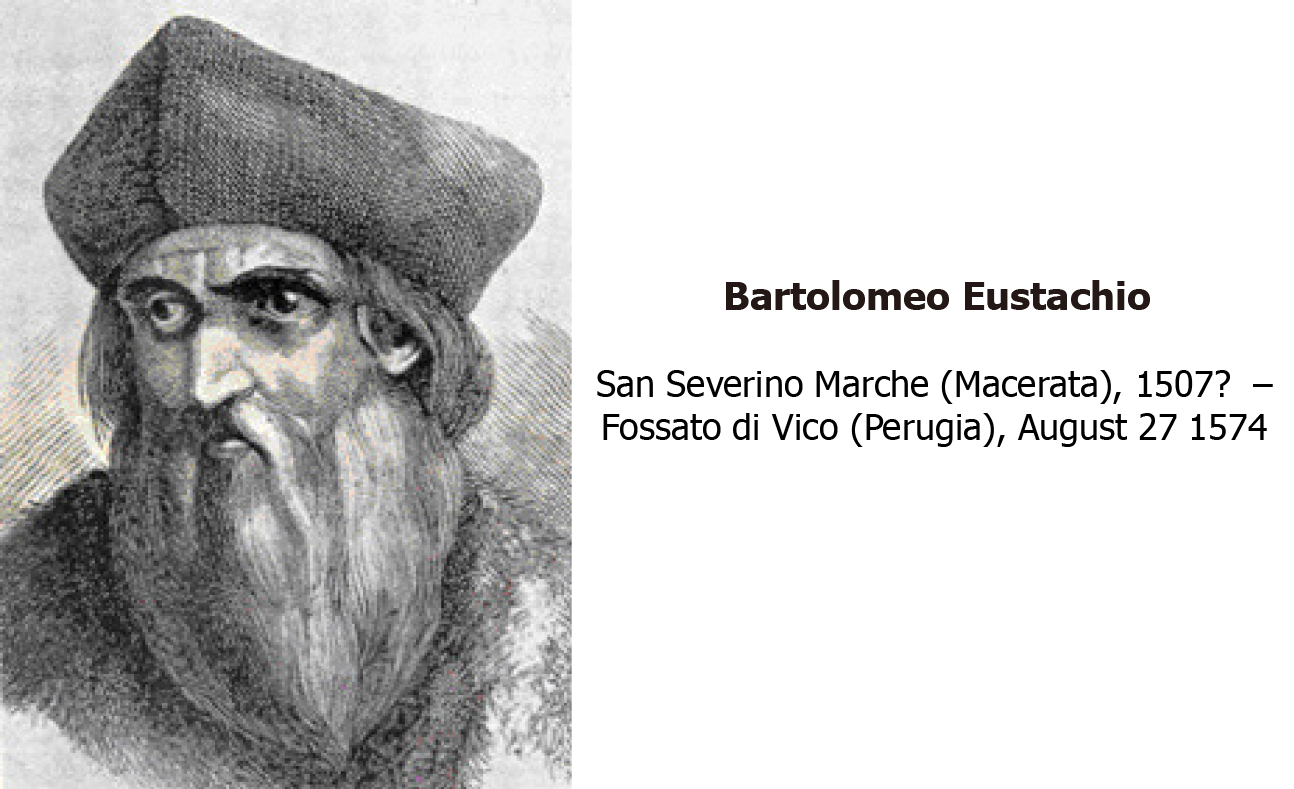 Figure 1 Bartolomeo Eustachio, also known by his latin name of Eustachius, was a distinguished physician of the Renaissance period, professor of anatomy at the medical faculty of Collegio della Sapienza in Rome and one of the founders of the science of modern human anatomy.

Incomplete regression of the right sinus valve of sinus venosus results in a spectrum of vestiges such as Chiari network, eustachian valve (EV), Thebesian valve of the coronary sinus and crista terminalis.

In particular, EV is a remnant of the embryonic valve of inferior vena cava (IVC), which in fetal heart directs oxygenated blood (by the placenta) towards the foramen ovale into the systemic circulation. It appears as a crescent-like membrane which extends from the IVC to the lower part of the fossa ovalis. There is a large variability in size, shape, thickness, texture and in the extent to which EV encroaches on neighboring structures such as the atrial septum. Its average length is 3.6 mm ranging from 1.5 to 23 mm[4]. Over time, EV disappears completely represented only by a thin ridge or, most commonly, it appears as a crescentic fold of endocardium arising from the anterior rim of the IVC orifice. The lateral horn of the crescent tends to meet the lower end of the crista terminalis, while the medial horn joins the thebesian valve, a semicircular valvular fold at the orifice of the coronary sinus (Figure 2). Sometimes, EV may persist as a mobile, elongated structure projecting deeply into the right atrial cavity, showing an undulating motion in real time echocardiography and, when it is quite large, it may be confused with right atrial tumors, thrombi, or vegetations. 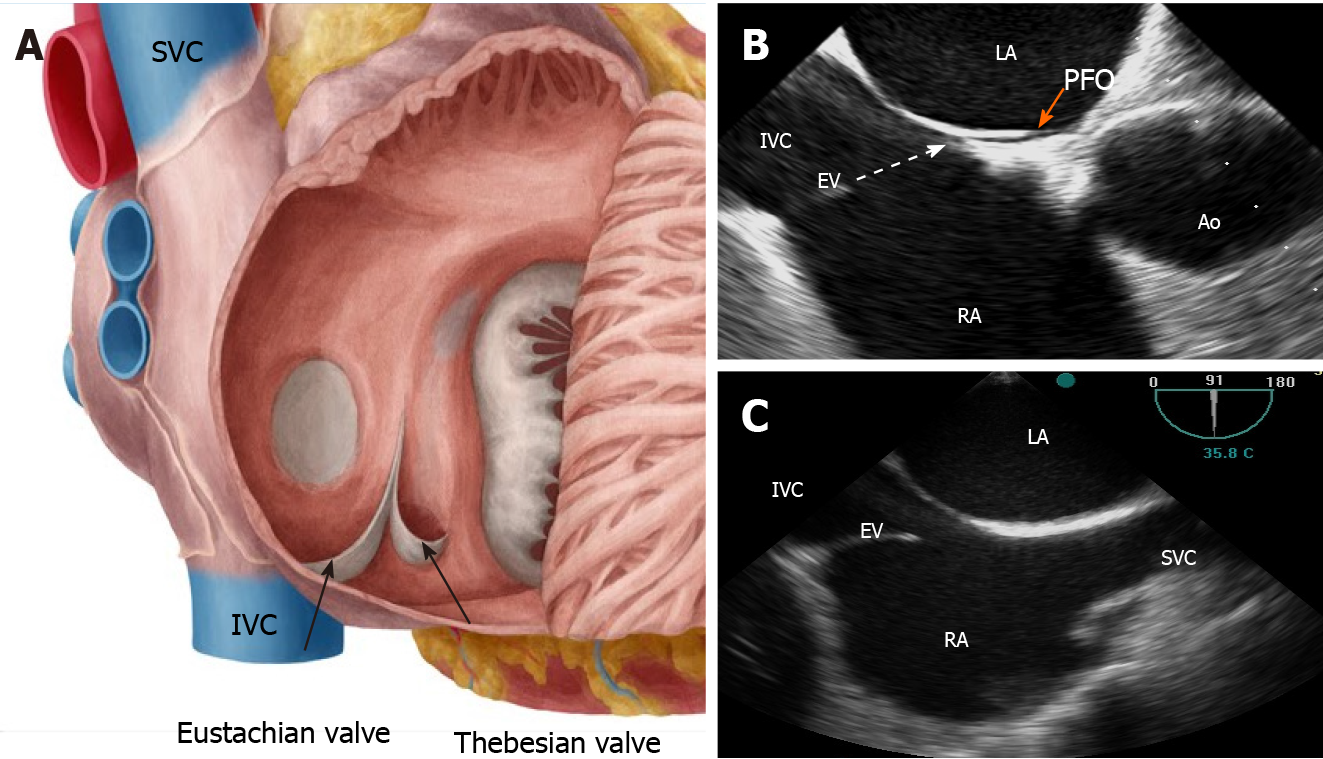 The superior vena cava, on the contrary, does not have any homologous valve.

WHAT IS THE EUSTACHIAN VALVE PREVALENCE AND THE ANATOMICAL PATTERNS?

The prevalence of EV in the general population is not known, as the diagnostic criteria vary in different studies. Yater[5] reported a rate of approximately 60% of persisting EV in adults in a group of 120 consecutive necropsies. Limacher et al[4] found an incidence of approximately 70% in children of various ages. On transoesophageal echocardiography (TEE) a persisting EV was found in 4.2% of the patients and its prevalence was similar in men and in women[6]. The features and the physiology of the EV have been well described by 2D/3D echocardiography[7,8].

Three different anatomical patterns have been described: (1) Chiari network, found in 2%-3% of normal hearts at autopsy[9], is a reticolous and filamentous membrane with attachment to the upper wall of the right atrium along the ridge connecting the vena cava and atrial septum; it often appears as a web-like structure with a variable number of thread-like components[10]; (2) Eustachian ridge (ER), also known as ‘‘sinus septum’’ is prominently located between the fossa ovalis and the coronary sinus ostium; the medial portion of the EV takes insertion on this structure and continues in the tendon of Todaro, which runs on the ER towards the central fibrous body[11]; and (3) EV, so called “valvula venae cavae inferioris”, which is characterized by a mobile and fenestrated membrane without any anatomic connection[12] (Figures 3, 4 and Supplementary Videos 1, 2), often misdiagnosed as an intra-atrial thrombus. 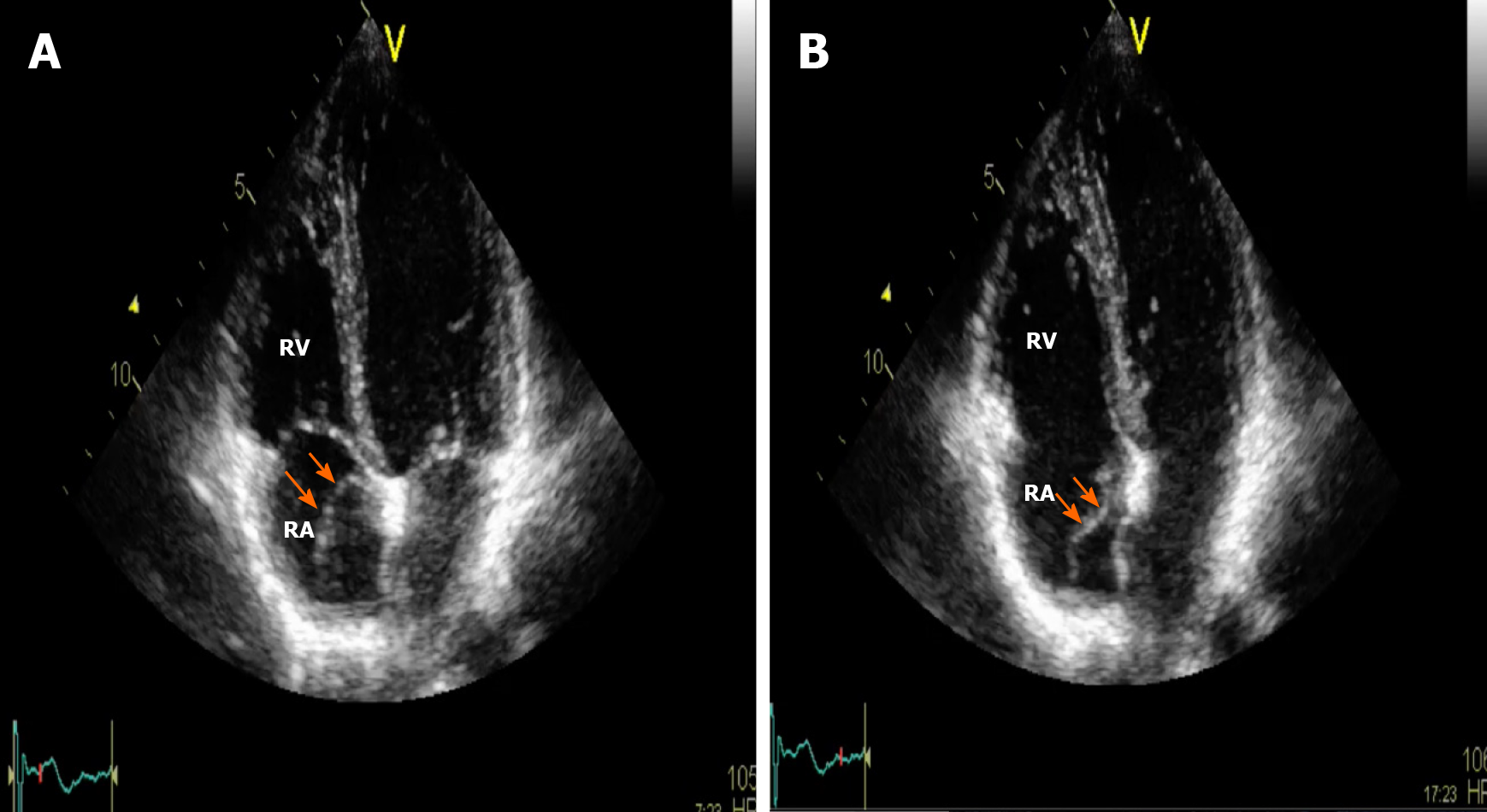 A persisting EV in the absence of other structural heart diseases is believed to have no pathological importance.

Nevertheless, EV is frequently found in adult patients with septal abnormalities, mainly patent foramen ovale (PFO) but also atrial septal defect (ASD) and it may participate in the mechanism of paradoxical embolism, by maintaining an embryonic right atrial flow pattern into adult life and directing the blood from the IVC via PFO into the left atrium (LA). Therefore, the presence of a prominent and large EV may increase the chance of paradoxical embolization beyond that associated with PFO size and the amount of shunting.

There are several reports documenting cyanosis in patients with ASD without an increase in right heart pressures but in whom the congenital defect was associated with a prominent EV, the valve thus being implicated as the possible source of the right to left shunt[13]. The findings support the hypothesis that patients with a cryptogenic stroke (CS) and ASD or PFO combined with a prominent EV may benefit from interventional closure of the interatrial communication.

A persistent EV, particularly a prominent one, has been frequently observed in cases of platypnea-orthodeoxia syndrome[14,15].

Furthermore, a large ER or a prominent EV may pose issues with device placement because those right atrial structures limit the space available over the fossa ovalis on the right atrial side and may cause a PFO device to sit away from the fossa ovalis. The disc may rest on the ER or EV and result in the PFO tunnel being held open with a persistent residual shunt. Comprehensive assessment on 2D/3D TEE imaging is needed to accurately assess how such structures will impact on device choice and size.

In addition, EV has the potential to interfere with manipulation of the guidewire and it can be caught in the device during deployment, interfering with the occluder position or enhancing an embolic risk if drawn across the septum into the LA. A report of a case series showed the practicability of using a steerable ablation catheter to deflect the EV away from the interatrial septum during the procedure[16].

Complications related to the presence of EV may occur such as obstruction of the inferior vena cava, thrombosis and possibly subsequent pulmonary embolism.

Occasionally, the EV crosses the floor of the right atrium from the orifice of the IVC and inserts into the lower portion of the interatrial septum adjacent to the atrioventricular valves. Higher insertion of a very prominent EV mimicking the echocardiographic appearance of divided right atrium is very rare[17]. Such a configuration of a large EV may also mimic a right atrial cystic tumor[18].

Large EV can predict the occurrence of residual shunt in patients who underwent PFO closure for cryptogenic cerebral ischemia[20]. Inglessis et al[21] found that the detection of EV on transthoracic echocardiography (hazard ratio: 9.04; 95% confidence interval: 2.07 to 39.44; P < 0.0034) was significantly associated with the occurrence of cerebrovascular events after PFO closure. Interestingly, the 3 patients with a prominent EV who suffered a recurrent event had persistent residual shunt after PFO closure.

EV may be nidus for thrombus formation

In situ or from adhesion of embolic material from another distant source (lower extremity deep vein thrombosis). In this setting, PFO patients with hypercoagulable states are at very high risk.

EV may be nidus for tumors

EV may interfere with the device placement

Presence of either EV or Chiari’s network may hinder the passage of wires, reduce the available space in the right atrium or even interfere with device placement[22].

EV may interfere to IVC cannulation

EV may potentially complicate a simple percutaneous ASD device closure: the free end can be confused in fact with superior rim on TEE bicaval view[24,25]. During surgery, EV could be mistaken for the true septum and inadvertently incorporated into the patch. This causes iatrogenic right to left shunt due to diversion of the IVC blood flow into the LA[26].

Echocardiography plays a key role in the identification and understanding of the eustachian valve and the other right atrial structural abnormalities, in order to avoid misdiagnosis and to prevent complications during interventional patent foramen ovale and before atrial septal defect closure procedures.

Large prominent eustachian valve has been found guilty at all the degrees of judgment and represents an important risk factor fostering paradoxical thromboembolism in patients with right-to-left shunting via patent foramen ovale. Bartolomeo Eustachio, the papal anatomist, would never have thought that his valve could have been identified as a serial partner in crime.