Cardiogenic shock in the setting of acute myocardial infarction (AMI) carries significant morbidity and mortality, despite advances in pharmacological, mechanical and reperfusion therapies. Studies suggest that there is evidence of sex disparities in the risk profile, management, and outcomes of cardiogenic shock complicating AMI. Compared with men, women tend to have more comorbidities, greater variability in symptom presentation and are less likely to receive timely revascularization and mechanical circulatory support. These factors might explain why women tend to have worse outcomes. In this review, we highlight sex-based differences in the prevalence, management, and outcomes of cardiogenic shock due to AMI, and discuss potential ways to mitigate them.

Core Tip: Sex disparities exist among different cardiovascular diseases and therapies. Cardiogenic shock is a leading cause of death among patients with acute myocardial infarction. Although some studies suggest that cardiogenic shock is more prevalent among women, women are less likely to receive guideline-recommended management including revascularization, which might explain why are more likely to experience worse outcomes.

Acute myocardial infarction (AMI) is the one of the leading causes of death in the United States and worldwide[1]. In recent years, there has been a decline in the incidence and case fatality of AMI, which is partly attributed to the advancements in management including timely reperfusion and medical therapies[2,3]. Despite these improvements, sex disparity still has an impact on AMI management and outcomes[3].

Women with AMI tend to have a higher cardiovascular risk profile on presentation, as they are likely older and have a higher prevalence of traditional cardiovascular risk factors such as hypertension, diabetes, hyperlipidemia, and obesity, compared with men[9,10]. Women also have greater variability in symptom presentation, since they often present with fatigue, dyspnea, dizziness, nausea, and upper back pain, while men usually complain of chest pain and diaphoresis[11]. This difference in presentation partly explains why the diagnosis of AMI is sometimes delayed or missed among women[12]. Women are also less likely to receive guideline-directed medical therapies or undergo timely pharmacological and mechanical reperfusion, as well as other invasive procedures[10,13]. Consequently, women are at a higher risk of AMI-related complications including cardiogenic shock and have a higher unadjusted mortality[10]. Indeed, some studies have indicated that female sex does not confer an additional risk of mortality after accounting for the differences in revascularization[14].

SEX DIFFERENCES IN THE PREVALENCE AND PRESENTATION

Some studies have suggested that cardiogenic shock in the setting of AMI occurs more frequently among women[9,15,16]. For example, data from the French Registry of acute ST-elevation or non-ST-elevation myocardial infarction (FAST-MI), that included > 10000 patients between 1995 and 2010, showed that the rate of cardiogenic shock was significantly higher among women compared with men (8.2% vs 4.8%; P < 0.001)[9]. Female sex was independently associated with an increased risk of developing cardiogenic shock after adjusting for age, type of AMI, and other baseline characteristics [odds ratio (OR) 1.20, 95% confidence interval (CI): 1.00-1.45][9]. Data from a prospective registry in Germany, The Maximal Individual Therapy of Acute Myocardial Infarction PLUS registry, that included 36643 patients with ST elevation myocardial infarction also showed that women are more likely to develop cardiogenic shock (12.9% vs 9.3%; P < 0.001), even after adjusting for other confounding variables (OR 1.19, 95%CI: 1.09-1.30)[15]. Another study that examined 9750 patients with cardiogenic shock in the setting of AMI between 1992 and 2008 from the Ontario Myocardial Infarction Database revealed that the rate of cardiogenic shock was also higher among women (3.7% vs 2.7%; P < 0.001)[16].

Similar to AMI without cardiogenic shock, women with cardiogenic shock tend to have a higher cardiovascular risk profile than men. Women usually have a higher co-morbidity burden including hypertension, diabetes, hyperlipidemia, and metabolic syndrome[9,16]. Women are less likely to have a history of prior MI, percutaneous coronary intervention (PCI) or coronary artery bypass graft[15]. These findings have also been observed even among younger patients. An analysis of the National Inpatient Sample (NIS) (the largest inpatient administrative database in the United States) of AMI complicated by cardiogenic shock admissions aged 18-55 years, between 2000 to 2017, found that younger women also tend to have higher burden of comorbidities[17]. Table 1 summarizes the studies comparing the prevalence and risk profile between women and men.

Notably, some sex disparities were observed in randomized trials of interventions for patients with cardiogenic shock in the setting of AMI. An exploratory analysis of the Should we emergently revascularize occluded coronaries for cardiogenic shock? (SHOCK) trial of 1190 patients showed that although the rates of thrombolytic treatment, PCI and surgical revascularization were not different between both sexes, intra-aortic balloon pump (IABP) use was less frequent among women (48% vs 55%; P = 0.05), despite exhibiting lower cardiac index[19]. In another trial, Intra-aortic Balloon Pump in Cardiogenic Shock II (IABP-SHOCK II) that included 600 patients undergoing early revascularization with or without IABP, although there was no evidence of interaction for IABP treatment based on sex, women were less likely to have undergone resuscitation before randomization[20]. Lastly, a secondary analysis of the CULPRIT SHOCK trial (Culprit Lesion Only PCI Versus Multivessel PCI in Cardiogenic Shock) showed that although the use of mechanical circulatory support was not different between women and men, women were less likely to receive therapeutic hypothermia[21]. Table 2 depicts the differences in in-hospital procedures between women and men.

Many studies have indicated that women have higher unadjusted mortality rates compared with men, primarily explained by older age, higher co-morbidity burden and lower likelihood of receiving reperfusion therapy and mechanical circulatory support devices. Data from the NIS database for older patients (≥ 75 years) revealed that despite a steady decrease in in-hospital mortality during the study period between 2000 and 2014, adjusted trends showed consistently higher in-hospital mortality among women compared with men[8]. Female sex remained an independent predictor of higher in-hospital mortality (adjusted OR 1.05; 95%CI: 1.02-1.08; P < 0.001)[8]. Similarly, NIS data for younger patients (18-55 years) also showed that women experienced higher hospital mortality, and that female sex was an independent predictor of in-hospital mortality (adjusted OR 1.11, 95%CI: 1.07-1.16; P < 0.001)[17] (Figure 1). The timely use of reperfusion strategies could potentially improve survival among women. For example, data from the French FAST-MI registry showed that although 1-year mortality was significantly decreased for both men and women due to primary PCI, primary PCI was an independent predictor of 1-year survival among women (hazard ratio [HR] 0.55, 95%CI: 0.37-0.81), but not men (HR 0.85, 95%CI: 0.61-1.19)[9]. Although these studies showed that women were less likely to receive reperfusion therapy and mechanical circulatory support devices, data about the angiographic findings and other clinical variables were not available in these studies. 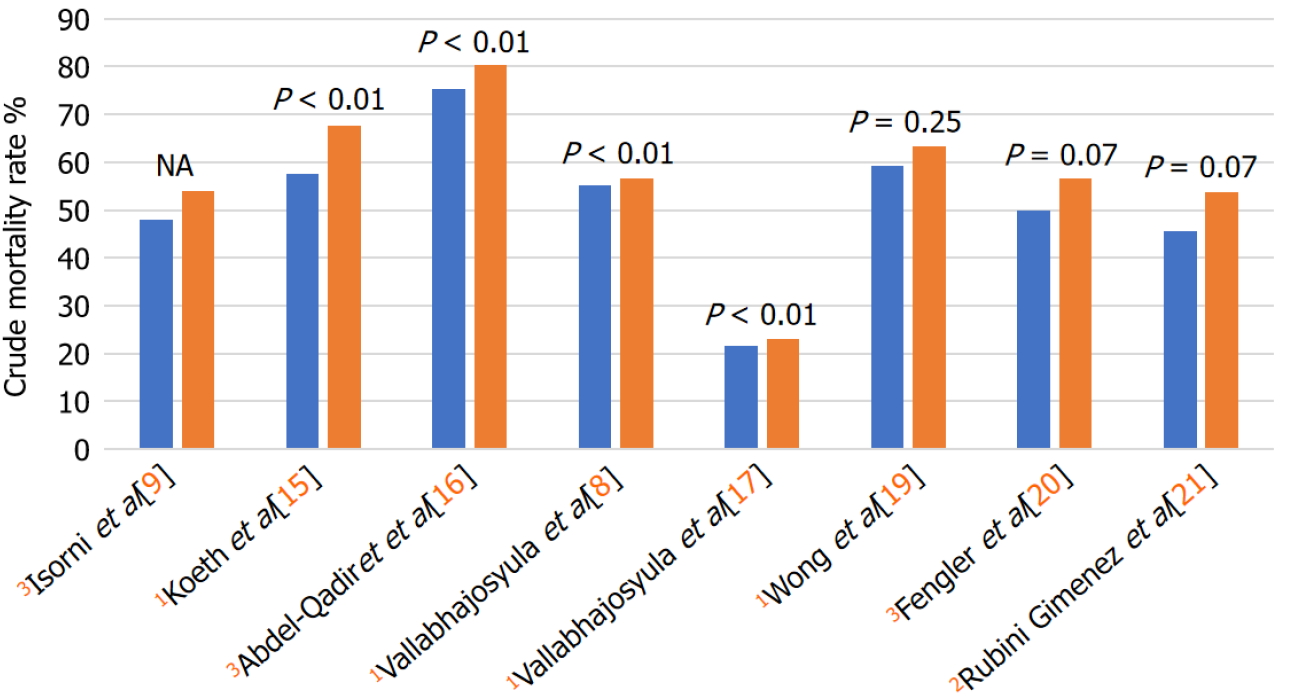 Secondary analyses of randomized trials of cardiogenic shock in the setting of AMI have also suggested that there was no difference in treatment effect based on sex[19-21]. As such, these findings support the notion that women should be treated similar to men (i.e. timely reperfusion, and consideration of mechanical circulatory support devices if indicated). Noteworthy, despite the higher prevalence of cardiogenic shock among women in many studies, women have consistently been underrepresented in these interventional trials. While women in the SHOCK and IABP-SHOCK-II trials comprised 32% and 31% of the participants, respectively, women constituted only 24% of the study population in the CULPRIT SHOCK trial that was conducted about 2 decades later.

Sex-based differences exist in the clinical presentation of AMI and might subsequently result in treatment delays. Women often present late and with non-classical symptoms of AMI and thus are often misdiagnosed resulting in delays in care, and potentially preventable adverse outcomes. This highlights the importance of using objective measures of risk stratification among patients with suspected AMI. Minimizing provider bias together with focusing on educating women at risk about the symptoms of AMI warrant priority.

With regards to clinical trials pertinent to cardiogenic shock in the setting of AMI, women continue to be underrepresented despite a higher incidence of cardiogenic shock among women in many studies. Clinical trials form the foundation for guidelines that shape our clinical practice, and the underrepresentation of women can result in some important information deficits with regards to management and outcomes. Well-designed clinical research studies with adequate women representation will ensure unbiased and reliable findings to guide clinical decision. An adequate representative sample is necessary for sex-based comparative analysis of the interventional strategy/therapy, as well as the outcomes. In this regard, there is a need to examine the role of sex-based differences in socioeconomic, logistic and enrollment barriers that might impede a proportionate representation of women[22].

Women, despite having higher comorbidity and varied symptom manifestation, derive similar benefit with guideline-directed management as men. This important message needs to be translated into action and reflected in our clinical practice, where unfortunately women are seen more often to be misdiagnosed and undertreated than men, resulting in worse outcomes. In the real world, there is a need to identify and address individual-based and system-based factors that trigger unconscious biases and impede the provision of high-quality and equitable healthcare irrespective of the sex differences. Since women with AMI have a higher cardiovascular risk profile and sometimes delayed presentations than men, clinicians are encouraged to keep a lower threshold for initiating work-up for diagnosis, and institute prompt delivery of care and employ aggressive treatment strategies when indicated.

In the meantime, there is a need to increase awareness among women to identify symptoms, and to seek immediate care. It is essential to emphasize both primary and secondary preventative strategies that are appropriate for women from numerous backgrounds, and could be applicable in various clinical settings. The foremost step towards personalized medicine involves paying attention to sex-specific details and recognizing sex-disparity in the clinical settings, which will help improve awareness, diagnosis, treatment and eventually outcomes in women.

Cardiogenic shock is the leading cause of death among AMI patients. Sex disparity in the management and outcomes of patients with cardiogenic shock in the setting of AMI exist. Although some studies indicate that cardiogenic shock occurs more frequently among women, women do not receive adequate management as evidenced by the lower rates compared of revascularization and mechanical circulatory support devices. Given these differences, women continue to experience worse outcomes. Future studies are needed to understand the reasons behind these differences and efforts are needed to minimize these disparities.