Most patients with PSCAD can be managed conservatively with medical management and have good outcomes. Patients with high-risk presentations benefit from the invasive approach. Coronary artery bypass graft may be required in select few patients based on angiography findings. Due to the risk of recurrent spontaneous coronary artery dissection, subsequent pregnancies are discouraged.

Chest pain is the second most common chief complaint for emergency room visits[1]. Common causes of chest pain presenting to the emergency department are gastrointestinal causes, musculoskeletal causes, acute coronary syndrome, pericarditis and pulmonary embolism[2,3]. Spontaneous coronary artery dissection (SCAD) leading to coronary ischemia is an uncommon cause of chest pain predominantly seen in women. SCAD is defined as an epicardial coronary artery dissection that is not associated with trauma, atherosclerosis or due to iatrogenic causes. Many cases of SCAD in women happen during the peripartum period, and this can be life-threatening events in young females[4,5].

Pregnancy-associated spontaneous coronary artery dissection (PSCAD) is an important cause of chest pain and acute myocardial infarction in pregnant and postpartum women. It remains rare in incidence overall, with a handful of case reports and few small case series reported in the literature. Pregnancy and puerperium are considered major risk factors for SCAD because of hormonal changes. The etiology of PSCAD is not clearly understood. Patients with PSCAD often have high-risk presentations and have a complicated course. Failure to diagnose and treat PSCAD timely may lead to worse outcomes.

Here, we report a case of a 33-year-old postpartum female who had a complicated course following SCAD requiring coronary artery bypass graft (CABG) and had an uneventful recovery. To further improve understanding of PSCAD, we conducted an extensive literature search of Medline database for articles published until October 2020 using the following search terms “Myocardial infarction”, “Pregnancy”, “Spontaneous Coronary artery dissection” and “postpartum” in various combinations. We have reviewed the etiology, clinical presentation, diagnosis and treatment strategy of PSCAD in this literature review.

A previously healthy 33-year-old Hispanic female with no significant medical history presented to the emergency room with sudden onset of chest pain while she was cooking dinner. The pain originated in the neck area on the left side and mid-back region, radiated to the anterior chest, was 10/10 intensity, pressure-like, lasted for 15 min, and resolved with aspirin. Chest pain was associated with nausea, vomiting, diaphoresis, shortness of breath, and lightheadedness. A month ago, she delivered her third child by normal vaginal delivery at 37 wk of gestation. The review of systems was otherwise unremarkable.

The patient had no prior history of coronary artery disease, aortic dissection, or pulmonary embolism.

She had no significant social history including smoking, alcohol or recreational substance use. She denied use of any over the counter medicines and denied use of any hormonal contraceptives before. Her only medications included prenatal vitamins and iron supplements. There was no history of sudden cardiac death or early myocardial infarction in the family.

Her physical examination was unremarkable. Blood pressure was 104/56 mmHg and heart rate was 82 beats per minute. Equal intensity pulses were palpable in both arms. There were no cardiac murmurs, jugular venous distension, crackles on auscultatory lung areas, and pedal edema. 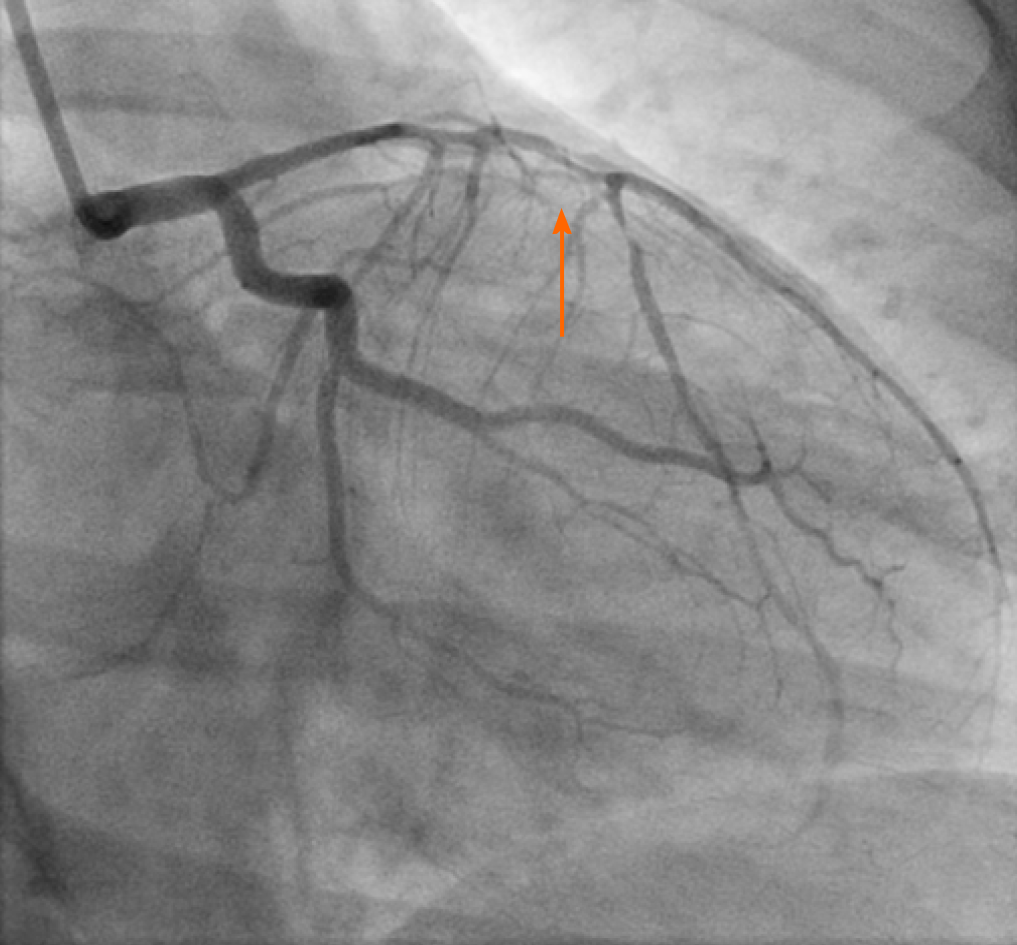 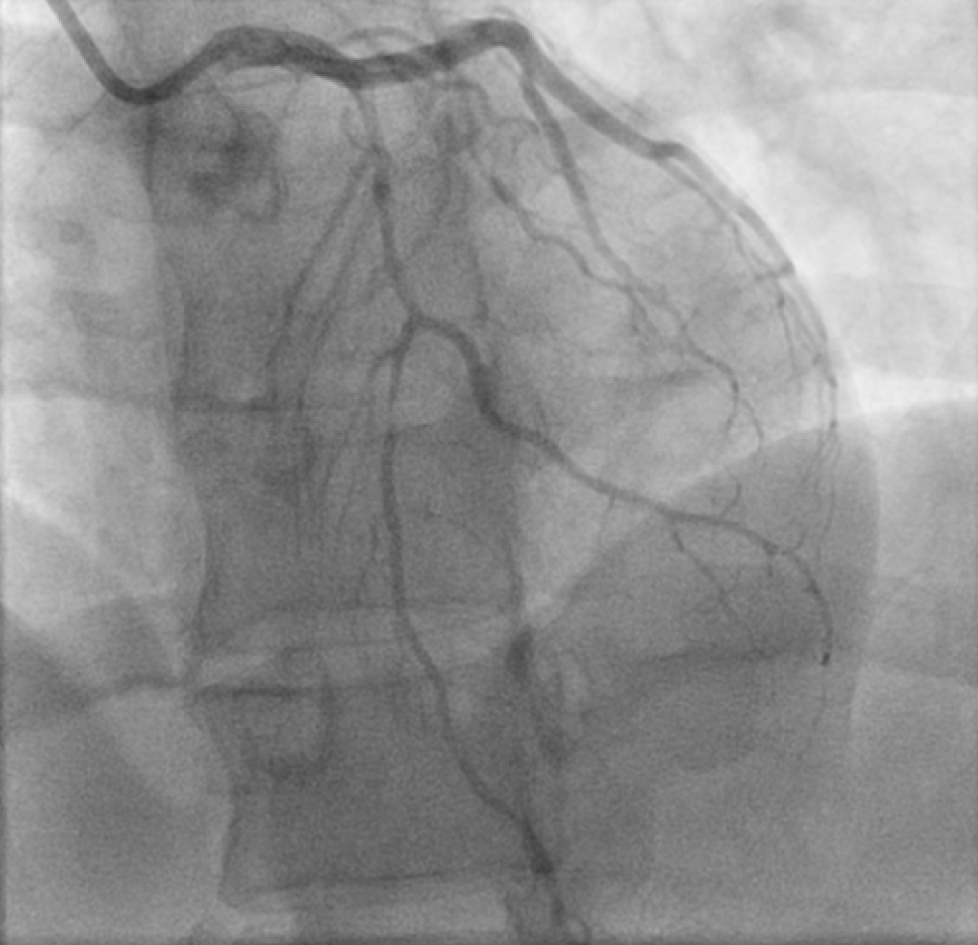 An intra-aortic balloon pump was placed, IV nitroglycerine and metoprolol were started. Conservative management was not an option for her owing to ongoing ischemia. Percutaneous coronary intervention (PCI) was considered extremely high risk for her due to extensive involvement of left anterior descending and CABG was favored. The patient underwent a CABG (free left internal mammary artery to left anterior descending and saphenous vein graft to diagonal 1 and 2) and was transferred to the cardiac intensive care unit with an intra-aortic balloon pump and dopamine infusion.

She had an uneventful post-operative recovery and was discharged home on Aspirin, Atorvastatin and Metoprolol with close clinic follow-up. Autoimmune workup including antinuclear antibody, anti-DS antibody, ANCA antibodies, anticardiolipin antibody, and diluted Russell Viper venom test was negative. Post-discharge clinic follow up in one and 3 mo were uneventful, and she was advised to continue medical management.

Pregnancy predisposes to an increased risk of myocardial infarction by three-fold compared to non-pregnant females in the reproductive age group[4]. PSCAD comprises about 40% of pregnancy-associated myocardial infarction[5]. PSCAD occurs in approximately 1.8 per 100000 pregnancies[6].

Given the rarity of this condition, the etiology of PSCAD is largely unknown. Black race, hyperlipidemia, hypertension and migraine have been associated with the development of PSCAD[6]. A meta-analysis of Genome wise studies has identified a common genetic locus PHACTR1-EDN1 implicated in the development of both fibromuscular dysplasia (FMD) and SCAD in affected patients[7]. In a PSCAD cohort, Fibromuscular dysplasia was noted in greater than 40% of cases who underwent imaging, revealing there may be a strong connection between FMD and PSCAD[8,9]. Autopsy studies have suggested that SCAD may be an initial manifestation of FMD[10,11]. Besides, several conditions that have been associated with SCAD including advanced maternal age, intense exercise, oral contraceptives, immunosuppressive therapy, menopause, sleep deprivation, cocaine abuse, connective tissue disorders such as Marfan syndrome and Ehlers-Danlos syndrome, polyarteritis nodosa and systemic lupus erythematosus may be related to PSCAD[12-14]. PSCAD patients also have higher rates of prior infertility treatments.

Pregnancy and puerperium are considered major risk factors for SCAD because of hormonal changes[15]. Changes in the levels of sex hormones leading to alterations in intima and media layers of arterial walls were proposed as a cause of PSCAD. Impaired collagen synthesis, myocyte proliferation and altered texture of mucopolysaccharides may weaken the layers of the coronary arterial wall. During pregnancy, a hyperdynamic circulatory state with increased shear stress on the labile coronary artery leads to coronary artery dissection[16,17]. PSCAD is more commonly observed in the left anterior descending coronary artery and Left main artery[15].

Elevated cardiac biomarkers including troponins due to myocyte injury from ischemia may be seen. EKG may reflect changes corresponding to the involvement and extent of coronary territory and the severity of ischemia. Emergent coronary catheterization is essential for establishing a definitive diagnosis. Computed tomographic angiography coronary angiography may be useful in postpartum patients for diagnosing dissection and also during follow-up evaluation for resolution[18]. Unlike SCAD, where mid and distal coronary artery occlusions are common, PSCAD patients are more likely to have proximal vessel (mainly left main and left anterior descending) or multivessel involvement[19]. They present with worse LVEF compared with other SCAD patients. EKG could be normal but may also show a nonspecific ischemic pattern, T wave inversions, ST-segment depression, or ST-segment elevation.

The management strategy employed in PSCAD is similar to the management of SCAD with special attention to the stage of pregnancy and emphasis on fetal and maternal well-being. Both conservative treatment with medical therapy alone and percutaneous coronary intervention have been used in the management of PSCAD. There are no evidence-based guideline recommendations from professional societies yet as SCAD/PSCAD is rare. There have been no randomized controlled trials to guide management and so there is no established strategy to guide treatment. Emergent coronary angiography is the key in reviewing coronary arteries' anatomy and diagnosing SCAD and also to identify the severity and extent of the coronary artery dissection[5]. Intravascular ultrasound and optical coherence tomography may help in differentiating true lumen vs false lumen. Conservative management strategy may be followed in stable PSCAD patients as in one case series of 750 patients, about 85% were managed conservatively and had good long-term outcomes[20]. PCI may be considered in patients in patients with proximal occlusions, cardiogenic shock, unstable rhythm and those who fail conservative treatment strategy[15]. However, PCI in SCAD patients has higher rates of complications such as propagation of hematoma (noted in one-third of cases) and iatrogenic dissection[21,22]. Difficulty in identifying true lumen limits the success rate with stenting in establishing the coronary flow. Coronary arteries may be more friable due to hormonal changes in pregnancy and PCI may further worsen dissection in PSCAD patients[6].

CABG is reserved for patients with multivessel involvement or involvement of the left main coronary artery with ongoing ischemia/infarction[5,23-25]. Thrombolytics should be avoided due to the risk of reexpansion of hematoma, causing expanding dissection leading to compression of the true lumen with worsening ischemia. Besides, thrombolytics fall in risk category C for use in pregnancy[26,27]. Caution advised with medical management as certain drugs are contraindicated or not well studied during pregnancy. Antiplatelet agents such as aspirin, beta-blockers such as labetalol are safe during pregnancy. Available human data suggests the benefits of Clopidogrel use outweigh risks during pregnancy and risk of fetal harm is not expected[28,29]. Angiotensin converting enzyme inhibitors should be avoided during pregnancy.

Previously considered a universally fatal condition, survival outcomes of PSCAD have improved in the past decades due to advances in the management of acute myocardial infarction. Maternal mortality rates are still high and variable in PSCAD patients, with one recent study reporting in-hospital mortality rates of 4.5%[30,31]. In another recent series of 750 patients containing 34 peripartum patients, PSCAD was associated with a higher rate of major adverse events (20.6%) such as Stroke/TIA, all-cause mortality, re-infection, Cardiogenic shock, congestive heart failure and cardiac arrest[20]. Patients with PSCAD were found to have an elevated rate of high-risk presentations and also known to have low ejection fraction compared to females with acute myocardial infarction in the same age group. Recurrence after SCAD has been noted, although less common. There is a paucity of information on the risk of recurrent SCAD in patients with prior PSCAD. Due to the high risk of mortality and morbidity associated with PSCAD, pre-conceptional counseling is recommended for subsequent pregnancies. Coronary tortuosity, migraine headaches, fibromuscular dysplasia, hypertension are associated with recurrent PSCAD. Careful evaluation, low threshold for coronary angiography referral and early intervention may help reduce the rate of missed diagnosis in high-risk women during the peripartum period. Multidisciplinary care coordinated by a team of experts including interventional cardiologists, high-risk obstetricians, internists, cardiothoracic surgeons and critical care specialists is essential in managing these patients in the peripartum period[32]. Targeted cardiac rehabilitation programs are preferred over strenuous high-intensity exercise programs in postpartum women[33].

Strong suspicion and emergent catheterization should be considered when pregnant and postpartum women present with chest pain, electrocardiogram changes and elevated biomarkers. Emergent coronary catheterization is essential for establishing a definitive diagnosis. Although no standard guidelines exist, conservative therapy with medical management has been increasingly adopted in pregnancy-associated spontaneous coronary artery dissection with good outcomes. Selected cases with high-risk presentations like ours have definitive benefit from PCI and coronary artery bypass graft. Hence, PCI should be reserved only for high-risk patients and coronary artery bypass graft in extremely high-risk or PCI failure cases.