Familial dilated cardiomyopathy (FDCM) account for 20%-30% of non-ischemic cardiomyopathies (NICM). Previous published data showed that some patients with FDCM tend to have rapidly progressive disease; however, five-year mortality was not significantly different in the familial and non-familial forms of NICM with optimal medical therapy.

To better define the characteristics and clinical outcomes of FDCM patients listed for heart transplantation (HT).

We queried the United Network for Organ Sharing Registry to identify FDCM patients listed for HT between January 2008 and September 2015 and compared them to NICM and ischemic cardiomyopathy (ICM) patients. We included all patients ≥ 18 years old and we separated patients to three groups: FDCM, NICM and ICM. Chi-square test was used to compare between categorical variables, the t-test was used to compare between continues variables, and Cox-proportional hazards model was used to perform time-dependent survival analyses.

End-stage FDCM patients are more likely to be transplanted, more likely to have early rejection, and have similar or higher survival than patients with other cardiomyopathies.

Familial dilated cardiomyopathy (FDCM) account for 20%-30% of non-ischemic cardiomyopathies (NICM)[1-3]. They are most often inherited in a Mendelian autosomal dominant fashion, although autosomal recessive or X-linked transmission exists[4]. Therefore, first-degree relatives have a higher risk of developing the disease[5]. In the United States, around 26% of patients listed for heart transplantation (HT) in the United Network for Organ Sharing (UNOS) Registry are diagnosed with FDCM[6]. Most previous outcome studies of NICM have not studied FDCM as a separate entity[2,7], perhaps because of the challenge in identifying these patients[2]. To make the diagnosis of FDCM, patients should have two or more affected relatives with NICM or a relative of a NICM patient with unexplained sudden death before the age of 35 years[8,9]. Previous published data showed that some patients with FDCM tend to have rapidly progressive disease[1,2], however, five-year mortality was not significantly different in the familial and non-familial forms of NICM with optimal medical therapy[2,3]. Similarly, mechanical circulatory support (MCS) utilization and HT outcomes have not well studied in FDCM patients and most available data are derived from relatively small cohorts and case reports. In this study, we used a large, contemporary, nationwide database to investigate the clinical characteristics, natural history, MCS use, and HT outcomes of patients with end-stage heart failure due to FDCM.

We used the thoracic transplantation files from the UNOS Registry contracted with the Health Resources and Services Administration. UNOS includes transplantation information on listed patients in all centers across the United States. Data are collected at different time points: at listing, before transplantation, and continually after transplantation. The listing center is responsible for providing the data. Data is used to match patients with donors, for administrative purposes, and for research reporting. The UNOS registry includes data on patient demographics, cause of cardiomyopathy, implanted devices, causes of removal from wait list, hemodynamics, comorbid conditions, listing status, laboratory tests, donor demographics, laboratory and other testing, post-transplantation complications [rejection, infection, kidney failure, length of stay (LOS)], vital status, and cause of death. The registry is continuously audited with strict quality control[10]. Data included in the UNOS are extracted from the transplant candidate registration form, which is filled at time of transplantation; and transplant recipient follow-up form, which is filled at follow-up. At the time of analysis, the database included 99177 patients listed for HT (1985-2015).

We included adults (≥ 18 years old), listed for HT with a diagnosis of idiopathic dilated cardiomyopathy “Dilated myopathy: idiopathic”, FDCM “Dilated Myopathy: Familial” and ischemic cardiomyopathy (ICM) “Dilated Myopathy: Ischemic”, between January 1st, 2008 to September 30th, 2015. We separated patients to three groups: FDCM, NICM and ICM and compared them. Additional cases were identified in the diagnosis free text variable. We compared their baseline characteristics, MCS utilization, and post-transplant outcomes to patients with the diagnosis of ICM and NICM.

Categorical variables were presented as numbers and percentages and were compared using Pearson χ2 test. Continuous variables were presented as means and standard deviations and were compared with Student t-test and. Survival analyses were done using Kaplan-Meier method with log-rank test and adjusted survival using Cox-proportional-hazard model. Variables that were significant in univariable models (P < 0.05) were included in the multivariable model. All tests were two sided. P < 0.05 was considered statistically significant. No assumptions were used for missing data. Institutional review board approval was not required because only deidentified data sets were used for this analysis. The statistical review of the study was performed by a biomedical statistician. 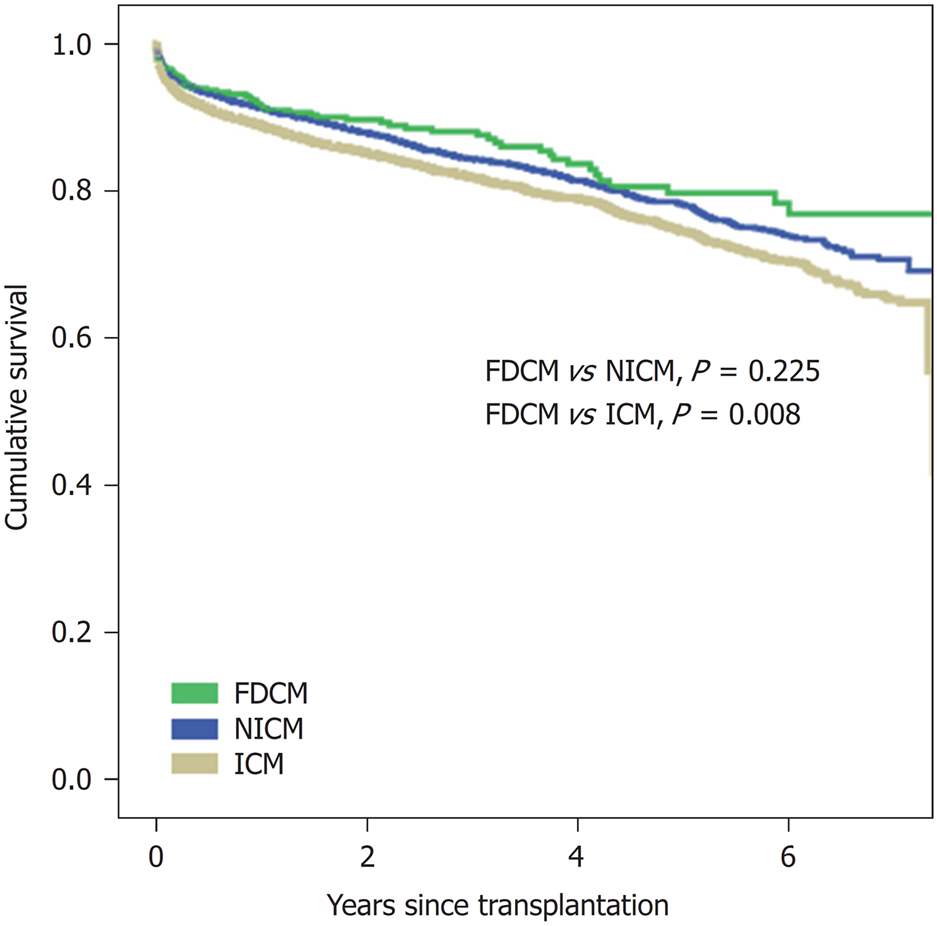 Herein we describe the largest contemporary cohort of patients with end-stage heart failure from FDCM listed for HT and report on their clinical characteristics and outcomes.

We found that patients with FDCM who are listed for HT tended to be younger and less predominantly males compared to ICM and NICM patients, which is consistent with previous literature[7]. In addition, we found that the diagnosis of FDCM is associated with less acuity at listing, as FDCM patients were more likely to be listed as a status 2, less likely to need LVAD, and more likely to be transplanted. When FDCM patients do need MCS, they more often need biventricular support, as is illustrated by their higher usage of TAHs.

We also investigated transplantation outcomes in FDCM patients, which might be a concern on these patients given the fear of early rejection, as they tend to be younger with active immune system[11,12]. Previously published data compared between FDCM and non-FDCM patients who are listed for HT and showed that rejection incidence is similar in both groups[1], however, immunosuppression therapies have significantly changed since that study. We found that FDCM patients were more likely to be treated for post transplantation rejection (11.4%) compared to ICM (8.4%). That maybe explained, in part, by the fact that FDCM patients were younger and likely to have more active immune system compared to older patients[11-14].

To the best of our knowledge, our study is the largest contemporary study that compared FDCM to NICM and ICM, and followed patients after HT. We found that FDCM patients had higher survival at one, three, and five years after HT compared to ICM patients, with no significant difference compared to NICM patients. As FDCM patients were less likely to have hepatic or renal dysfunction, that may explain the higher rates of survival after HT in this group[15]. Besides that, ICM patients tend to have more comorbidities compared to patients with NICM, which may explain the higher mortality rate in ICM group[16]. Valentine et al. compared between FDCM and NICM and found that FDCM patients had higher survival compared to NICM patients 5 years after HT, however, the large discrepancy in sample size between the 2 groups in that study makes statistical comparison invalid[1].

Our study presents the clinical outcomes of patients with end-stage heart failure from FDCM listed for HT. The outcomes of our study may help providers in making clinical decisions while following these patients before and after HT.

Limitations of our study are mainly associated with registry-based analysis with a limited sample size of patients with FDCM, due to underestimation of the disease[6]. Therefore, our results should be interpreted in this context. Although regularly onsite audits are performed for the UNOS registry, the actual quality of the patient data has not been subject to a comprehensive audit[10]. Second, this database did not address how the diagnosis of FDCM was made and whether relatives of patients with FDCM had echocardiography to confirm the diagnosis of FDCM. Third, this registry did not mention the type of inotrope, doses, and other treatments such as: inhaled nitric oxide, or prostacyclins that were used while awaiting transplantation. Fourth, the database is missing the reason of mechanical ventilation. Although the difference of its incidence was not significant, we did not know if patients were intubated due to a cardiac etiology or any other reason. Fifth, graft failure rates might be underestimated across the groups, as its occurrence requires inotropes or mechanical ventilation support after transplantation, which is not captured by the UNOS database. Finally, as listing practices and peri-transplant care may be different in different countries, our results may not be applicable to transplant centers in other countries because UNOS is a US-based registry.

In conclusion, patients with end-stage FDCM are listed at a younger age, most often as status 2, and more frequently transplanted than patients with other cardiomyopathies. Although FDCM is associated with more frequent early rejection, survival of these patients is similar or better than other heart transplant recipients.

As the outcomes of FDCM listed for HT patients were not studied, we used a large database to compare FDCM to ischemic cardiomyopathy (ICM) and NICM patients who are listed for HT. Our results may help to better understand the clinical course of FDCM patients while they are awaiting HT and their outcomes after being transplanted.

The objective of this study was to compare FDCM to ICM and NICM patients who are listed for HT and describe their clinical course while awaiting HT and their post-HT outcomes.

This study may help providers in making clinical decisions for patients with end-stage heart failure due to FDCM while waiting and after HT.