METHODS: Oxidizability potential was determined in a group of chronic IHD patients who underwent a symptom limited EXT upon initiation of a cardiac rehabilitation program. The thermo-chemiluminescence (TCL) assay was used to assess serum oxidizability potential. This assay is based on heat-induced oxidation of serum, leading to the formation of electronically excited species in the form of unstable carbonyls, which further decompose into stable carbonyls and light energy (low chemiluminescence). Measured photons emission is represented by a kinetic curve which is described by its amplitude and slope (= ratio). We assessed the correlations of TCL ratio with exercise duration, metabolic equivalents (METS), maximal heart rate (mHR), maximal systolic BP, > 1 mm S-T depression, diabetes, hypertension, smoking, left ventricular ejection fraction (LVEF) > or < 40%, previous myocardial infarction, and aorto-coronary by-pass surgery and compared to the TCL ratio measured in a group of healthy controls.

CONCLUSION: Serum oxidizability potential is associated with EXT parameters, results, and IHD severity. TCL ratio is an “easy-to-measure marker” that might be incorporated into risk assessment and prediction in chronic IHD patients.

Oxidative stress reflects a condition in which the balance between reactive oxygen species (ROS) production and the subsequent response of the antioxidant defense system is lost, becoming skewed in favor of free radical expression[1-3]. Although a multitude of free radicals exists (hydrogen atoms, transition metal ions, carbon-centered radicals, sulfur-centered radicals etc.), those derived from oxygen are referred to as ROS. ROS are highly reactive and very unstable molecules, which tend to initiate chain reactions resulting in irreversible chemical changes of lipids and proteins. These potentially deleterious reactions can result in profound cellular dysfunction and even cytotoxicity[4].

Recent data imply that measurement of oxidizability is a key to kinetic evaluation of oxidative processes of LDL, blood serum and other body fluids, and can be used for monitoring the oxidative stress in different diseases and antioxidant drug therapy[5-9]. The oxidizability of a biological sample is a measure of its susceptibility to oxidation.

Growing evidence indicates that chronic and acute overproduction of ROS under pathophysiologic conditions is important for the development of cardiovascular diseases (CVD). ROS mediate various signaling pathways that underlie vascular inflammation in atherogenesis: from the initiation of fatty streak development through lesion progression to ultimate plaque rupture. Oxidative stress is the unifying mechanism for many CVD risk factors, which additionally supports its central role in CVD[10].

Evidence for increased oxidative stress has been found in plasma of patients with ischemic and nonischemic dilated cardiomyopathy and correlates directly with the severity and chronicity of symptoms, and inversely with left ventricular ejection fraction (LVEF)[11,12].

Single bouts of aerobic and anaerobic exercise can induce an acute state of oxidative stress. This is indicated by an increased presence of oxidized molecules in a variety of tissues. Exercise mode, intensity and duration, as well as the kind of population under study, can impact on the extent of oxidation[16-22]. Exercise-induced oxidative stress has been investigated during and after exercise in chronic heart disease and chronic heart failure patients[13,23,24]. Most studies have shown an increased oxidative stress pre- and post-exercise However, no study has assessed the relationship between pre-exercise test (EXT) oxidizability potential, the EXT parameters and their results.

MATERIALS AND METHODS
Selection of patients

Patients with an acute or recent febrile illness, significant liver dysfunction, or renal failure (serum creatinine ≥ 2.0 mgr% ) were excluded from the study. Subjects regularly using anti-oxidant supplements (vitamins A, C, E, or Co-Enzyme Q-10) or drugs with presumed anti-oxidant properties (statins, carvedilol) were required to stop these medications 7 d prior to the test.

All subjects underwent a symptom limited EXT upon initiation of a cardiac rehabilitation program; prior to the EXT, a 2 mL venous blood sample was drawn for thermo-chemiluminescence (TCL) assay.

Determination of TCL and oxidizability potential

Photons emission during heating was measured by TCL Analyzer (manufactured by Lumitest Ltd., Caesarea, Israel) using a photomultiplier model R265P (Hamamatsu Photonics Co. Ltd. Ichino-cho, Higashi-ku, Hamamatsu City, Japan) with a spectral response range of280-650 nm. The computer program of the device has two main functions: (1) analysis of the sample preparation (0.05 mL of serum required for the test); and (2) data processing, display and storage. The serum under exam was spread over the surface of aluminum tray (a kind of miniature Petri dish) inside the sample preparation block and then was vacuum-dried. Then, the dish was mounted on a constant heater with heating temperature 80 ± 0.5°C in the analysis block and the photons emission was measured each second for 300 s. The obtained TCL curve was described mathematically as the amplitude of the kinetic curve of the photons emission and slope of the curve. The obtained curve is described mathematically as the amplitude of the kinetic curve and its slope (= ratio), which reflects the heat-induced susceptibility to oxidative modification of the tested sample, i.e. the residual oxidative capacity due to prior in vivo molecular oxidation. Thus, a lower curve slope suggests a lower oxidative potential, indicating higher oxidative activity before test.

Statistical analysis was performed using SPSS v15.0 (Chicago, IL, USA) and data were presented as means ± SD. Student’s t-test was used, due to the normal distribution of results, and correlations were determined by Pearson's coefficient. Associations were considered statistically significant when the P value was < 0.05. Regression analysis was performed in order to find out the independent variables with the most evident impact on TCL ratio.

A lower serum oxidizability potential, expressed as a low TCL ratio, suggestive of a previous, high oxidative stress, was found in patients with IHD compared to normal controls, and in particular among patients with low LVEF% (please see examples in Table 1, Figures 1 and 2). 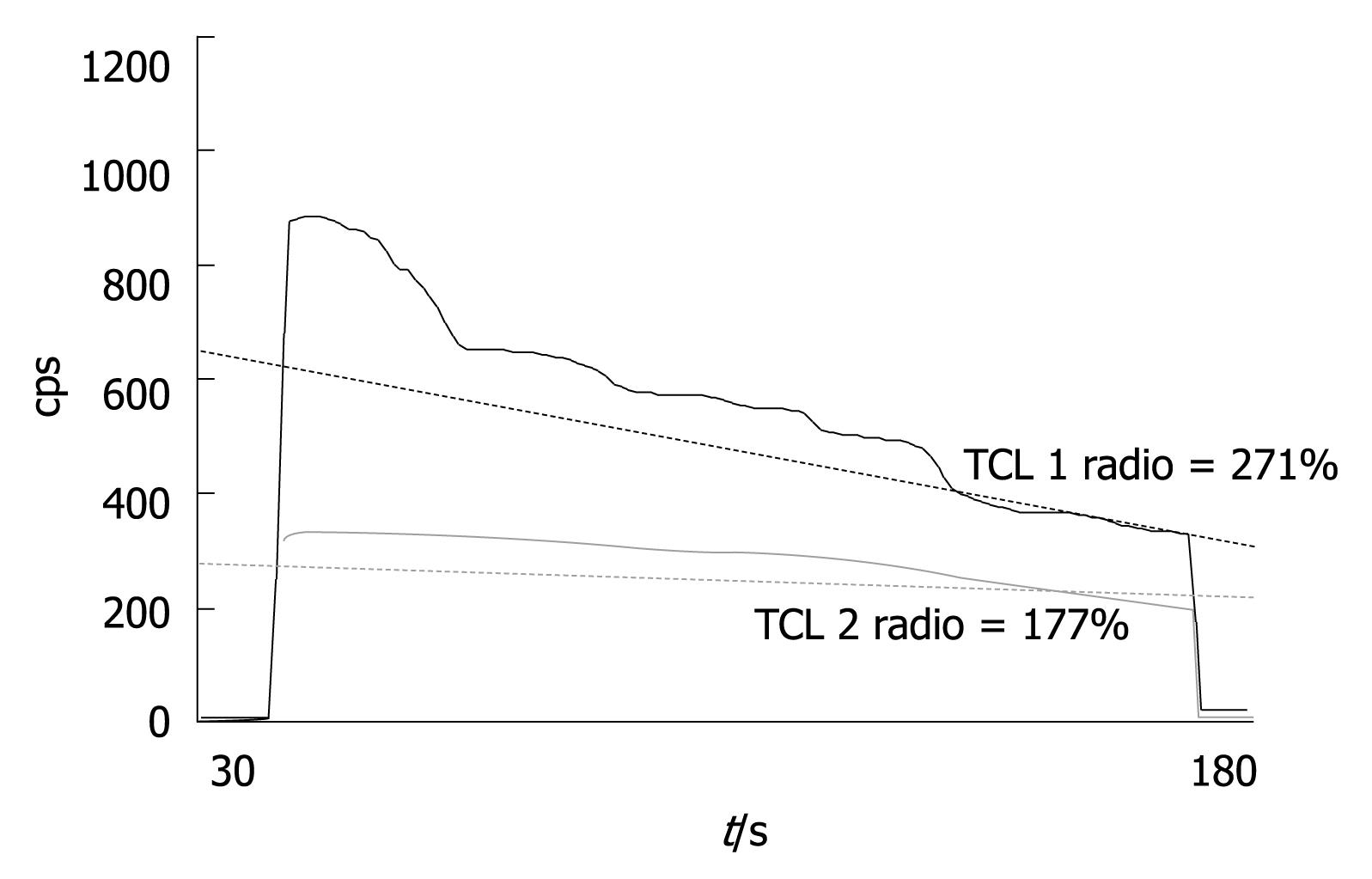 Figure 1 TCL ratios (and trend lines) of a normal subject (TCL 1) and of a patient suffering from congestive heart failure (TCL 2). 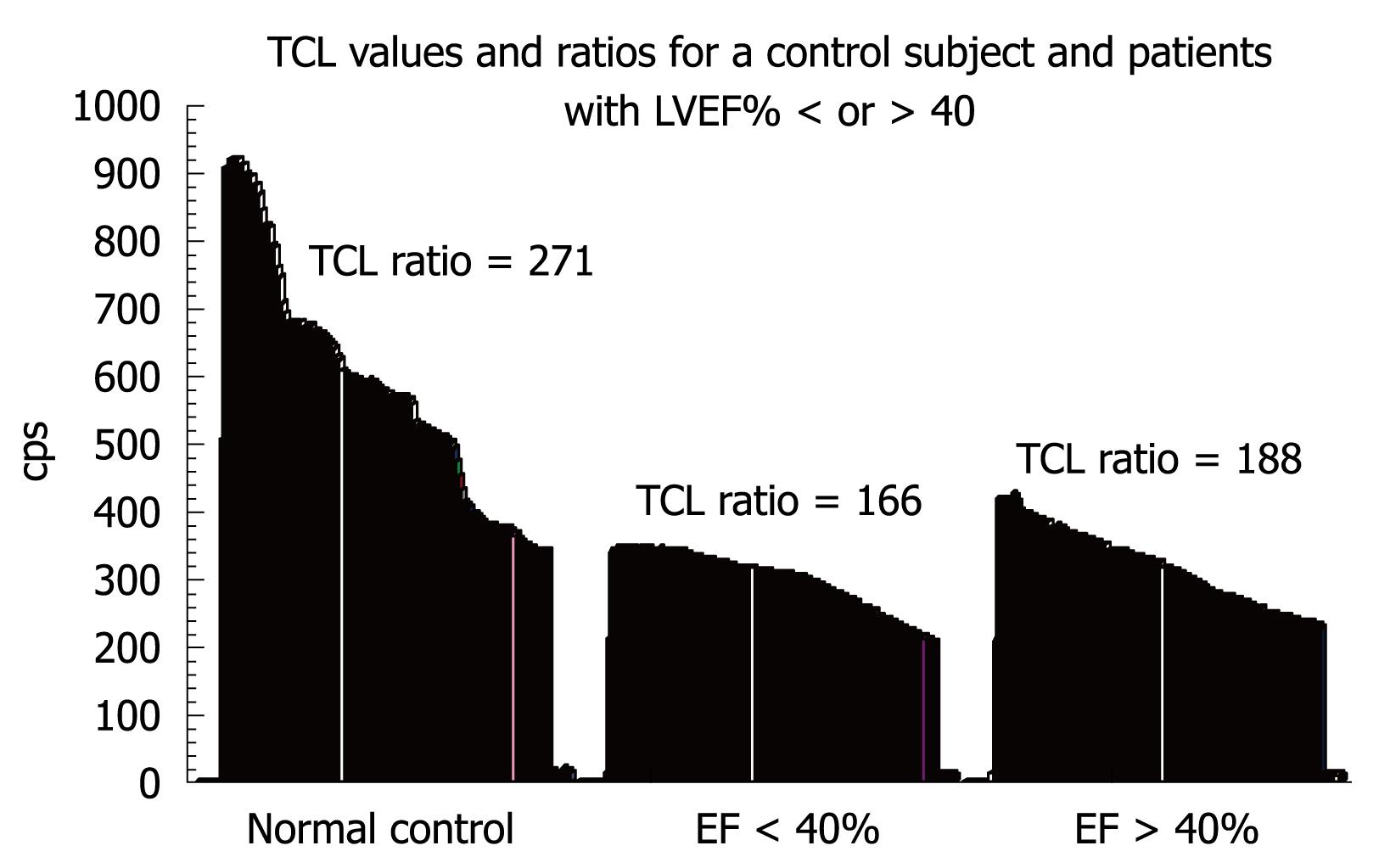 A paradoxically low TCL ratio (low oxidizability potential) was observed in patients without S-T depression compared to patients with S-T depression (189 ± 22 vs 201 ± 15, P = NS), due to the fact that these patients had a much lower LVEF% and a lower exercise capacity.

Oxidative stress, which may result in oxidative tissue damage, occurs when there is an imbalance between ROS production and antioxidant defenses, i.e. either increased ROS production and/or impaired defense mechanisms. The net result may be assessed by the oxidizability potential.

The TCL assay used in our study is one among the accepted, validated and reproducible methods[7-9] for measurement of oxidative stress and serum oxidizability potential. This assay is based on the heat-induced oxidation of a sample leading to the formation of electronically excited species (in particular of triplet excited carbonyls) and of light-energy, low-level chemiluminescence.

It is well known that atherosclerosis and IHD are associated with increased lipid peroxidation, and exaggerated free radical production is often observed in patients with congestive heart failure (CHF). Increased ROS production has been shown to impair endothelium-dependent vasorelaxation, to cause myocyte apoptosis, to increase monocyte adhesion and inflammatory gene expression, thus contributing to myocardial and skeletal muscle contractile dysfunction and deterioration in CHF patients[13].

In most studies involving chronic IHD and CHF patients, a significant increase in exercise-induced plasma oxidative stress was found. Exercise mode, intensity, and duration, as well as the subject population tested, all can certainly impact the extent of oxidation[16-21,25]. However, these studies disagree when pre-exercise oxidative status is examined. Sayar et al[13] failed to find a significant difference in resting plasma oxidative stress in CHF patients as compared with controls, the likely reason for these unexpected findings being that the control group contained patients with many cardiovascular risk factors rather than healthy controls. Thus, it was suggested that the underlying risk factors may be associated with an increase in resting pre-exercise plasma malondealdehyde levels. Díaz-Vélez et al[26] have reported similar findings concerning the resting plasma oxidative stress in symptomatic CHF patients (LVEF < 40%), and in asymptomatic patients with LVEF > 40% without clinical evidence of CHF but with hypertension, DM or a history of myocardial infarction. On the other hand, in the study of Belch et al[27], there was a significant, negative correlation between LVEF and oxidative stress.

No study so far has addressed the question whether the pre-exercise oxidative status may have an impact on EXT results or whether it can contribute to the risk assessment of these patients. The findings of our study show that the sicker the patient is, with lower EF and lower exercise capacity, the lower is his serum oxidizability potential, as reflected by the lower TCL ratio. Thus, assessment of TCL ratio at resting conditions may predict EXT results and, therefore, support risk assessment in chronic IHD patients. Oxidizability potential assessment may have clinical applications in the routine follow-up of the atherosclerotic disease in obese, diabetic, and hypertensive patients, as well as in patients treated with drugs, vitamins, and food supplements with alleged or proved anti-atherogenic or pro-atherogenic properties.

Exercise-induced oxidative stress has been investigated during and after exercise in chronic heart disease and chronic heart failure patients. Oxidizability potential is a key to kinetic evaluation of oxidative processes of LDL, blood serum and other body fluids, and can be used for monitoring the oxidative stress.

Most studies have shown an increased oxidative stress pre- and post-exercise, however, no study has assessed the relationship between pre-exercise test oxidizability potential, exercise test parameters and their results.

Study findings suggest that oxidative capacity is decreased due to prior recurrent in vivo molecular oxidation, thus, the sicker the patient is, with lower LVEF%, and lower exercise capacity, the lower is the serum oxidizability potential, as reflected by the lower TCL ratio.

Oxidizability potential assessment may have clinical applications in the routine follow-up of the atherosclerotic disease in obese, diabetic, hypertensive patients, in patients treated with drugs, vitamins, and food supplements with alleged or proved anti-atherogenic or pro-atherogenic properties. Measurment at resting conditions may predict exercise test results, therefore, supporting risk assessment in these patients.

The paper is interesting, though there are small number of patients and control and they were poorly matched, the study is interesting and this should be taken as a concept of proof study. It will be a nice and interesting paper to publish.