Although cardiovascular disease (CVD) has always been perceived as a pathology regarding essentially males, incidence and death from cardiovascular events dramatically increase after menopause in women. Obviously, while many aspects of CVD are similar in both sexes, it is now clear that there are significant differences as well. Exploration of these gender-related differences in CVD might provide a basis for the development of new strategies in the management of patients with CVD from a gender point of view. In particular, a growing amount of data suggested the possible major role of oxidative stress in female patients and the possibility to integrate this new biomarker in future study evaluating CVD risk in women.

It is well known that coronary heart disease (CHD) represents the main cause of mortality and morbidity for men but also for women over age 50 years[1]. However, it has been essentially conceived as a “man’s disease”, and the influence of gender on CHD has been misunderstood and underestimated. Really, mortality due to CHD has not decreased in women as it has in men in the last 20 years, with most women dying suddenly from cardiovascular disease (CVD) without previous symptoms, but with a high prevalence of risk factors for CHD[2].

Generally, the risk for women is misperceived because of the strong conviction that females are “protected” against CVD. This conviction rises from the fact that women are effectively at lower risk of cardiovascular events with respect to men during their first decades of life, being protected by estrogen action in their premenopausal life (Figure 1). However, the onset of menopause marks a crucial point in the woman with important implications also for the cardiovascular system. It is well known that the incidence of CVD is significantly higher in postmenopausal women when compared to those in the same age range who are still fertile[3]. To note, life expectancy for women is greatly increased, and women spend up to one third of their life in their menopause status. Thus, according to the increased possibility of experiencing cardiovascular events, which rapidly rises after the menopause, the advantage gap for women becomes progressively smaller until it is overcome by that of men in advanced age (Figure 2)[2,4]. 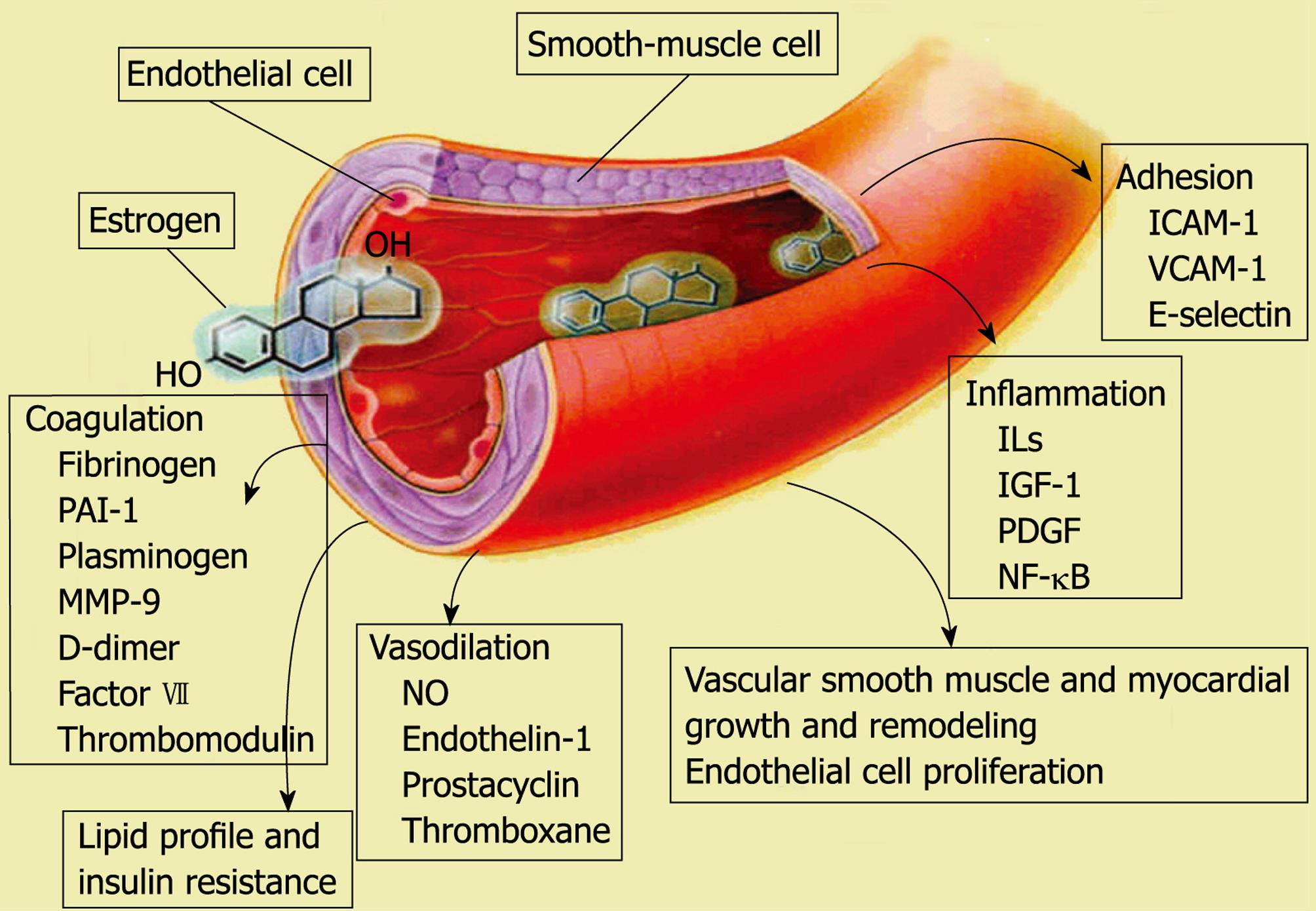 Figure 1 Multiple effects of estrogen on the cardiovascular system. Available from: URL: http://www.ehealthspan.com. 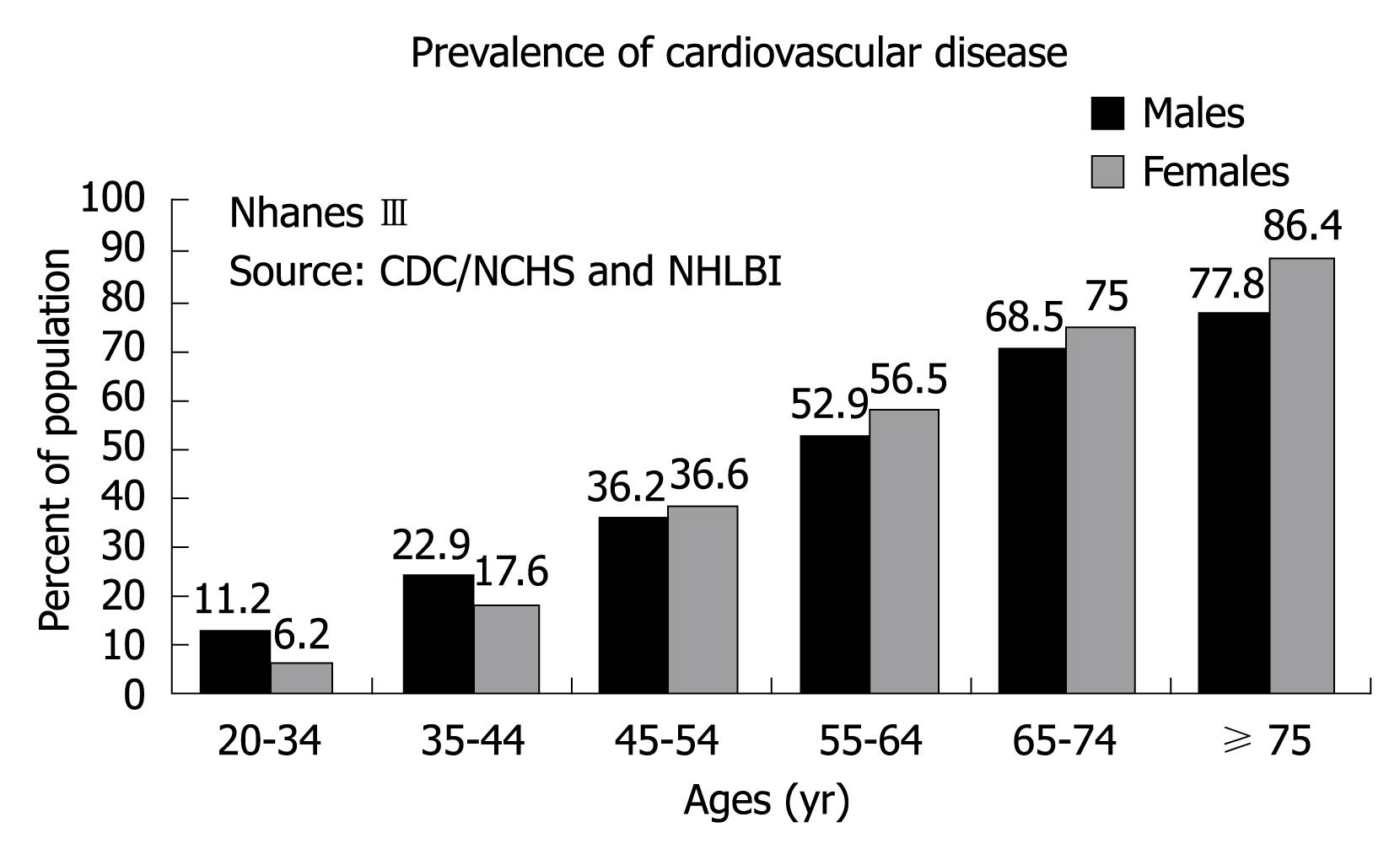 Aspects related to pathogenesis, clinical presentation and outcome of the CHD have not been as extensively studied in women as in men. For a long time, the percentage of women included in CVD trials was always too low[5]. Consequently, most current indications for the prevention, diagnosis and therapy are deduced from cohort trials essentially conducted in men, and often result in inappropriate treatment.

However, the deepening of these issues is of particular interest because much evidence indicated that elderly women have even higher mortality and morbidity than men after cardiovascular events. Interestingly, some recent trials on the prevalence of normal or nonobstructive coronary arteries by gender assessed by early angiography after an acute coronary event showed a 20% or greater excess of normal or nonobstructive arteries in women vs men[6]. The women with nonobstructive coronary artery disease appeared to have an even higher rate of subsequent adverse events, as indicated by the Women’s Ischemia Syndrome Evaluation study[7].

Obviously, if many aspects of CVD are similar in both men and women, some differences concerning physiopathology, risk profile, symptoms, age of onset and response to medical treatments are emerging[8]. These differences demonstrate the need of more attention by physicians to address gender disparities[9]. Thus, new insights into women’s cardiovascular physiopathology are essential in order to assess more accurately and target more specific prevention strategies to reduce CHD risk in female subjects, as well as in men.

The studies focused on the possible gender-related role of different cardiovascular (CV) risk factors, have shown important differences (Table 1)[8]. Naturally, hormonal status represents a specific and unique risk factor for women. Moreover, in addition to traditional risk factors, cardio-metabolic risk is an important determinant in women[10]. It is known from examining the lipid profile that total cholesterol, triglycerides, low-density lipoprotein (LDL) and lipoprotein [Lp(a)] increase sharply within 6 mo of menopause onset, while high-density lipoprotein (HDL) gradually declines[10]. However, HDL-C is always significantly higher in women than in men; this may be considered a gender-specific protective factor[10]. Nonetheless, it has been determined that low HDL-C, rather than high total and LDL-C, represented a more important predictor of CHD in women[10].

Other gender-related differences emerged in a meta-analysis of 17 studies (including 46 000 men and 11 000 women), which indicated elevated triglycerides as a greater predictor of CV events for women than for men, even after adjustment for HDL-C and other risk factors[11]. Moreover, high levels of Lp(a)were associated with increased CV risk, particularly in women with high levels of LDL-C[12].

Among the inflammatory biomarkers, the addition of C-reactive protein to the Framingham risk score improved the global CV risk prediction in women, especially in those at low-to-intermediate risk[13].

THE ROLE OF OXIDATIVE STRESS FOR CV RISK IN WOMEN

Many risk factors that promote CVD have been identified, including hypertension, hypercholesterolemia, diabetes, decreased estrogen in post-menopausal women, increased homocysteine, and cigarette smoking[14]. A mechanism common to all these risk factors is the elevation of the oxidative stress status[15]. In particular, oxidative stress phenomena occur during the progressive step that characterizes an atherosclerotic lesion from the onset, during its development until the events that induce clinical manifestation of the CVD[15]. Consequently, oxidative stress biomarkers have been found by us and others to be associated with the presence and severity of the CVD, and to the presence and number of risk factors[16,17]. However, few studies evaluating the risk of CVD in women also included markers of oxidative stress[18].

It is known that young women during their fertile life are at lower risk of cardiovascular events compared with men, being protected by estrogen action and that oxidative stress is generally higher in men than in premenopausal women[19,20]. However, after menopause the risk of experiencing cardiovascular events rapidly rises in women, in conjunction with a parallel increase in oxidative stress biomarkers[19,21,22]. Recent data showed higher levels of biomarkers of inflammation and higher oxidative stress levels in elderly women than in elderly men[23]. Oxidative stress has been found elevated in post-menopausal women when compared to pre-menopausal women, and recent data has shown that oxidative stress plays a major role in different conditions which often accompany menopause, such as hot flashes and osteoporosis[24-26]. Moreover, although oxidative stress results are lower in females compared to males during the first decades of life, this difference decreases until the age range which corresponds to the onset of menopause for women, while for elderly people the tendency is even inverted[27].

Although many in vitro data showed the antioxidant properties of estradiol, the role of hormone replacement therapy (HRT) on oxidative stress levels remains still to be demonstrated[28]. However, most of the studies suggested possible beneficial effects or lack of adverse consequences of different doses and formulations of estradiol on the oxidative status in postmenopausal women treated with HRT[29,30]. Nonetheless, future studies are needed in this field to better clarify the role of different HRT regimens and doses on the oxidative stress balance. 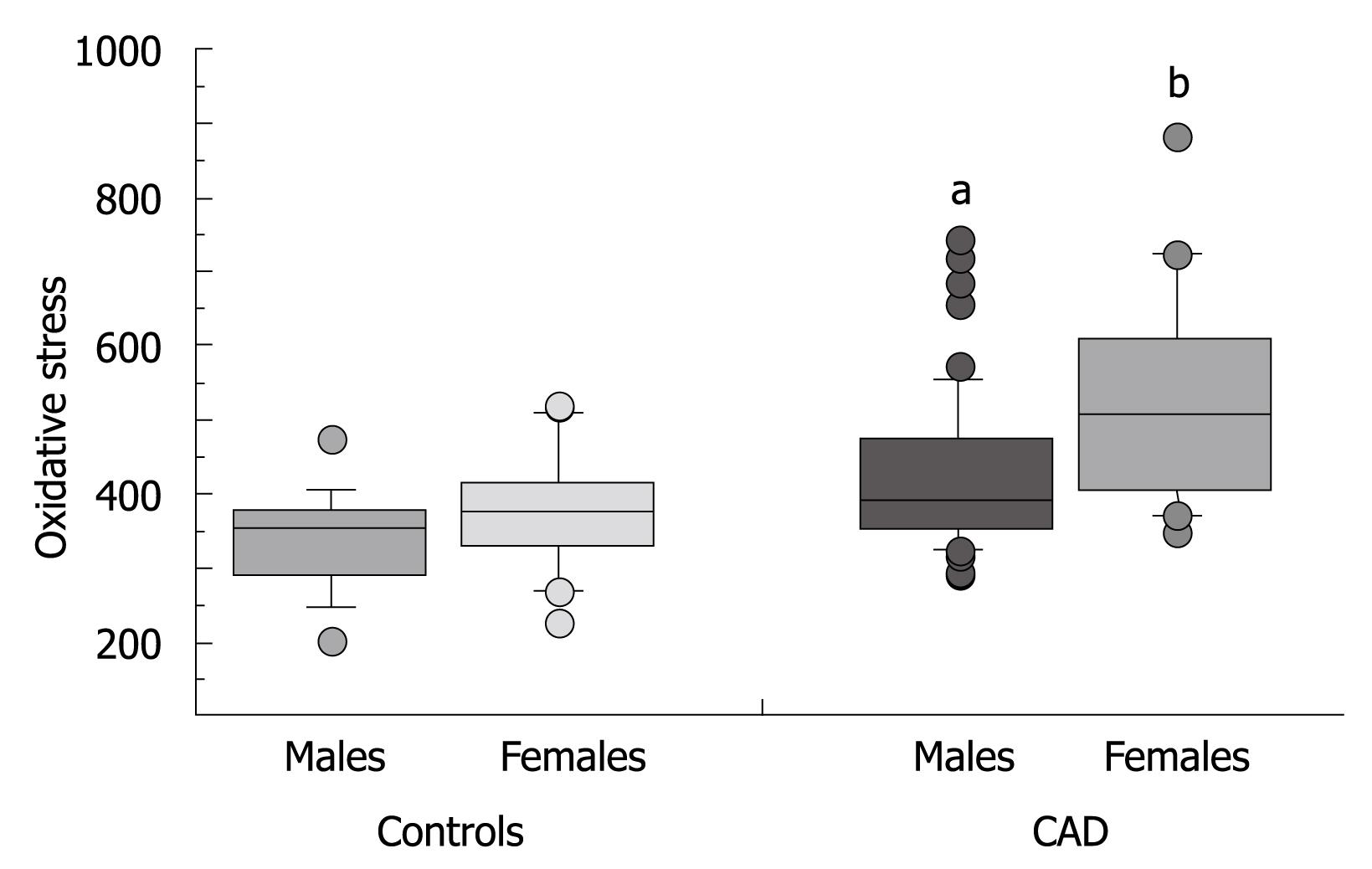 With regard to antioxidant vitamin supplementation to prevent CVD, actual guidelines did not recommend its use although folic acid supplementation is advised for high-risk women with high levels of homocysteine[36,37]. Moreover, two recent trials (Norwegian Vitamin and Heart Outcomes Prevention Evaluation 2) have demonstrated the lack of efficacy of combined supplementation of folic acid and vitamins B12 and B6 in preventing CVD[38,39]. Conversely, data from the Women’s Health Study suggested that vitamin E failed to provide benefits for either major CV events or myocardial infarction except in women > 65 years of age, where it significantly reduced the risk of major CV events[40].

Emerging data have suggested significant gender-based differences in CVD. In particular, menopausal status appears to enhance the development of CVD through several unfavourable changes in metabolism and hemodynamic parameters. Exploration of these aspects of CVD will provide a basis for clinical strategies directed to improve the outcome for women and consequently lead to the discovery and adaptation of different approaches to prevention, diagnosis and management of CVD in women when appropriate.