To investigate the epidemiology, treatment and outcomes of acute appendicitis (AA) in a large population study.

This is a retrospective cohort study derived from the administrative dataset of the Bergamo district healthcare system (more than 1 million inhabitants) from 1997 to 2013. Data about treatment, surgery, length of stay were collected. Moreover for each patients were registered data about relapse of appendicitis and hospital admission due to intestinal obstruction.

Core tip: Acute appendicitis is the most common surgical emergency around the world. In the Bergamo district, northern Italy its incidence is 89/100000 inhabitants per year with a negative trend during the last years. Percent of 95 patients were treated with appendectomy, 48% of whom laparoscopically; 1.3% of operated patients had an intestinal obstruction during the follow-up. Conservative treatment resulted in a reduced length of stay but 23% of patients had a relapse during follow up. Cumulative length of stays during the study period was similar for the two treatment option.

Acute appendicitis is probably the most common surgical emergency worldwide. Since its first accurate description by Fitz[1] in 1886 and the first appendectomy performed by Treves[2] in England, appendectomy became the preferred treatment of acute appendicitis. Although appendicitis is a very common disease, nowadays it has a still poorly understood etiology, with a very heterogeneous clinical pattern of presentation, varying from simple uncomplicated appendicitis to generalized peritonitis due to perforation. For each clinical pattern the proposed treatment is the same: Appendectomy. This results in an overtreatment with a described rate of negative appendectomy (a hystopathological diagnosis of normal appendix) ranging from 6% to 20%[3,4]. Appendectomy has also a complication rate ranging from 8% to 11%, depending on the surgical technique[5]. Several reports described spontaneous resolution of uncomplicated appendicitis without the need of an operation and, since the high rate of negative appendectomy and the significative complications rate, some authors proposed and advised conservative management for uncomplicated appendicitis[6,7]. Conservative management for appendicitis has been described in 1930 by the “Ochsen-Sherren delayed[8] treatment”, which consisted of resting and fasting followed by delayed elective appendectomy; nowadays, a conservative approach based on antibiotic therapy is gaining popularity, as documented by several randomized studies and meta-analyses that analyze this peculiar issue[9-17]. Conservative treatment has been shown to be safe and effective as primary treatment compared to surgical treatment with a significative reduction in morbidity, even with a considerable one year recurrence rate of 23%[17].

The aim of the study was to describe the epidemiology of acute appendicitis in a large population study during the last seventeen years in order to analyze the evolution of the treatment throughout the years - appendectomy or conservative treatment, open or laparoscopic surgery - and to study the long term follow up of patients, in order to investigate the relapse rate of acute appendicitis in conservatively-treated patients and the incidence of intestinal occlusion after surgery.

This is a retrospective analysis of patients discharged from the hospital between 1997 and 2013 with a diagnosis of acute appendicitis. Data were extracted from the administrative health care database of Bergamo’s district, a large area (2723 km2) in Northern Italy with 1094062 inhabitants. This database collects all discharge records for each citizen of the district from any hospital, public and private, intra and extra-district. On the basis of this register, patients are assigned to the respective DRG, and reimbursements are supplied to the hospitals from the regional health care system.

Patients were retrieved on the basis of the concomitant presence of an unplanned hospital admission, with a ICD9-CM code of AA (ICD9-CM code 540.X, 541.X, 542.X, 543.X) in the first three diagnostic fields and with an Italian DRG code of Acute Appendicitis.

Continuous variables were expressed as mean ± SD and were compared with the Mann-Withney U test; association was tested with the Pearson’s χ2 test. Correlations were calculated with the Pearson’s correlation test. Multivariate analyses were performed with the logistic regression method. Survivals were calculated with the Kaplan Meier method. Statistical analysis was performed with SPSS software (SPSS version 20, IBM, United States). Trends were studied with the Jointpoint model: Joinpoint regression analysis was performed using the Joinpoint software from the Surveillance Research Program of the United States National Cancer Institute (Joinpoint Regression Program, Version 4.1.1 - August 2014; Statistical Methodology and Applications Branch, Surveillance Research Program, National Cancer Institute). Trends were summarized with Average Annual Percent Change (AAPC). Calendar years started from 1997, until 2013. Crude rates are per 100000 inhabitants. 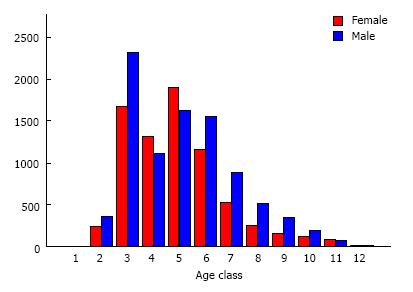 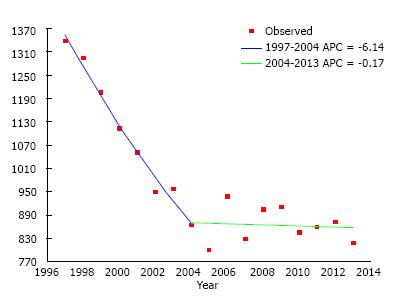 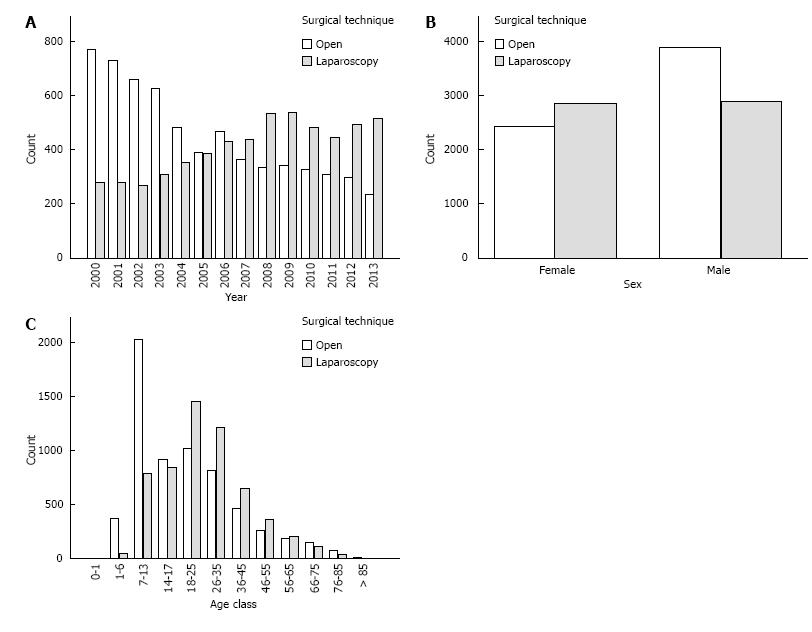 Figure 3 Surgical technique during the years (A), between sex (B) and among age classes (C). 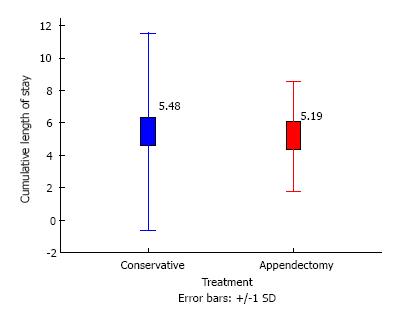 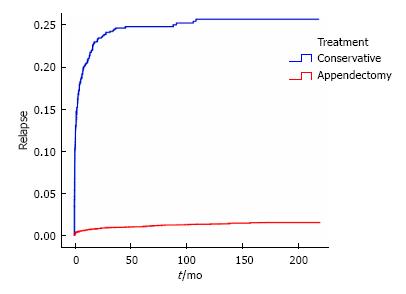 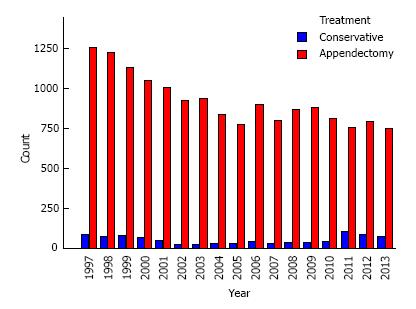 Figure 6 Treatment option during the years.

Acute appendicitis in Northern Italy has a crude rate of 89 cases per 100000 inhabitants per year, and this data is comparable to similar studies in other country worldwide[18-21]. Surprisingly, during the study period the incidence decreased significantly, from 120 to 73 cases per 100000 inhabitants. This data contrasts with the data reported by Buckius et al[20] in the United States over a similar period of time. Acute appendicitis is already a poorly understood disease and its diagnosis is still based on clinical judgment, with great variability among surgeons. Clinical scores have been developed and proposed in the last years to help surgeons reaching a diagnosis of acute appendicitis, such as the Alvarado and the Andersson score[22,23]: The decrease in the incidence rate could be explained by the diffusion of these scores and a consequent increased attention in the diagnosis of acute appendicitis, in order to reduce the rate of negative appendectomies. As expected, acute appendicitis is more frequent in young and male patients (Figure 1), as reported by the literature[18-20], with augmented incidence among patients in the 7-25 years categories. In the years categories 14-25, acute appendicitis is more frequent in females: A possible reason is the starting of childbearing ages and the sexual transmitted disorders that could mime acute appendicitis - with lower quadrant abdominal pain - and a consequent higher rate of negative appendectomies, as reported by Seetahal et al[3]. Unfortunately there are no data available on the rate of negative appendectomies to confirm this hypothesis. The possibility of a diagnosis other than appendicitis in women justifies the higher frequency in this subgroup of the laparoscopic technique, which give the possibility to thoroughly explore the peritoneal cavity, as shown in Figure 3B. Laparoscopic appendectomy was performed in 48% of the cases, with an enormous increase across the years, from 26% to 69% (Figure 3). This data demonstrates the gradual diffusion of the laparoscopic technique, as shown by a similar study in the same contest for acute cholecystitis[24]. After multivariate analysis, the laparoscopic approach was correlated to the year of treatment, female sex and older age: Figure 3C demonstrates that open appendectomy is still the preferred technique for children.

Conservative treatment for acute appendicitis in Northern Italy is still a neglected option, with only 5% of patients treated not operatively; however, over the period of study there was a small increase in the proportion of patients treated conservatively. Despite the small number, conservative treatment seems to be an effective treatment option, showing a reduced length of stay and, notwithstanding an overall relapse rate of 23%, a similar cumulated length of stay and number of hospital admissions during the study period, with a clinically not significant difference (Figure 4). Conservative treatment, as shown in Figure 5, fails after a median of 32 d and leads to an operative treatment in the majority of cases. Factors involved in the choice of this approach are represented by the comorbidities of the patient and the year of treatment, showing that this option is slowly spreading, but still depends on the surgeon’s preference. Conservative treatment resulted in 77% reduction of surgical procedures for appendicitis during the study period, maintaining a similar length of stay; moreover, appendectomy exposes patients to the risk of intestinal obstruction due to adherences in 0.7%-10.7%[25-27]: In our group of patients, 1.3% of the patients needed a further hospitalization due to bowel obstruction after a median of 11 mo and required a further surgical operation in 60% of cases. Laparoscopic appendectomy has been shown to reduce the risk of intestinal obstruction[28] and our results confirm this evidence, although the clinical effect is not significant (Table 2). A cost-effectiveness study demonstrated that conservative treatment, with a failure rate of less than 40% is more cost effective than operative management: Our results on a large population study during a long period show that treating a patient with acute appendicitis conservatively could be considered the better treatment option.

The study was performed retrieving data from an administrative register that allows for a long-term follow up for each patient included; unfortunately, administrative registries do not include data about histopathological diagnosis. Moreover, figures about failure of conservative treatment could be slightly underestimated, considering the lack of data about the immediate failure during the first hospital admission.

In conclusion the treatment of acute appendicitis in Northern Italy is slowly changing, with the large diffusion of laparoscopic approach; conservative treatment of non-complicated appendicitis is still a neglected option, but full of promising results.

Acute appendicitis is the commonest surgical emergency. Despite appendectomy is considered the definitive treatment there is great interest in the conservative management.

Epidemiology and treatment of acute appendicitis.

The study outlines the current epidemiology of acute appendicitis giving an overview on the state of the art of the treatment’s choice in the daily clinical practice.

The study gives the state of the art of the treatment of acute appendicitis and its changes during the last years.

This is a well-written article with good statistical analysis.