While diverticular disease is extremely common, the natural history (NH) of its most frequent presentation (i.e., sigmoid diverticulitis) is poorly investigated. Relevant information is mostly restricted to population-based or retrospective studies. This comprehensive review aimed to evaluate the NH of simple sigmoid diverticulitis. While there is a clear lack of uniformity in terminology, which results in difficulties interpreting and comparing findings between studies, this review demonstrates the benign nature of simple sigmoid diverticulitis. The overall recurrence rate is relatively low, ranging from 13% to 47%, depending on the definition used by the authors. Among different risk factors for recurrence, patients with C-reactive protein > 240 mg/L are three times more likely to recur. Other risk factors include: Young age, a history of several episodes of acute diverticulitis, medical vs surgical management, male patients, radiological signs of complicated first episode, higher comorbidity index, family history of diverticulitis, and length of involved colon > 5 cm. The risk of developing a complicated second episode (and its corollary to require an emergency operation) is less than 2%-5%. In fact, the old rationale for elective surgery as a preventive treatment, based mainly on concerns that recurrence would result in a progressively increased risk of sepsis or the need for a colostomy, is not upheld by the current evidence.

Core tip: The natural history of sigmoid diverticulitis is poorly understood. While there is a clear lack of uniformity in terminology, which results in difficulties interpreting and comparing findings between studies, this comprehensive review demonstrates the benign nature of simple sigmoid diverticulitis. The overall recurrence rate is relatively low. Several risk factors are found to be associated with recurrence.

Colonic diverticulosis is an increasingly common condition in the Western world. Half of the population is affected by the 6th decade and two-thirds by the 9th decade[1,2]. Fortunately, the majority of patients with diverticulosis remains asymptomatic; diverticulitis, the most common presentation of diverticular disease, has a life time prevalence of 25%[3,4]. The diagnosis of sigmoid diverticulitis is usually suspected clinically in a patient presenting with acute lower abdominal pain, associated with an inflammatory syndrome. The preferred imaging modality is computed tomography (CT)[5] scan, which may also demonstrate complicated diverticulitis (abscess, fistula or peritonitis)[6]. A full colonoscopy once the acute inflammatory process has resolved[5] is recommended in order to exclude cancer or inflammatory bowel disease[7]. Most patients presenting with simple diverticulitis will be successfully managed symptomatically or with antibiotics alone[8-11].

Whilst diverticular disease is extremely common, there are few prospective series documenting the natural history (NH) of sigmoid diverticulitis[12,13]. Studies from the 1960s had suggested that a recurrent episode of diverticulitis occurs in > 40% of patients, and that these are complicated in up to 60%[14]. However, recent series suggest that the NH of sigmoid diverticulitis, in the era of modern antibiotics, is more benign[15,16], as shown in our prospective cohort study[17]. A few have looked at the incidence and severity of recurrent diverticulitis but with the diagnosis based upon clinical parameters only[18]. Without a CT scan it is difficult to differentiate between simple and Hinchey I-II diverticulitis[10,19,20]. So, the existing studies probably do not provide reliable information regarding the NH of simple diverticulitis.

The object of this review is to evaluate the NH of simple sigmoid diverticulitis.

There is a clear lack of uniformity in terminology resulting in difficulties interpreting and comparing findings between studies[10,18].

NH can be defined as the longitudinal outcomes for patients whose disease was managed non-operatively[21]. In our own cohort (NCT01015378), we chose a definition of simple diverticulitis, which comprised 4 criteria[22]: (1) Clinical: Acute lower abdominal pain or discomfort; (2) Biological: Inflammatory syndrome [C-reactive protein (CRP) > 50 mg/L or white blood cell count > 11000 G/mm3]; (3) Radiological: Signs of inflammation of the sigmoid and/or descending colon on a CT scan ideally performed with triple contrast injection (oral, rectal, and intra-venous); and (4) Endoscopic: To document the presence of diverticula (i.e., confirming the diagnosis) and rule out another associated condition.

All patients are usually encouraged to undergo routine colonoscopy six to twelve weeks after the first attack, in order to rule out malignancy, although the evidence supporting this practice is weak[10,18].

Regarding outcomes, a diagnosis of recurrent diverticulitis implied that the patient has completely recovered from their first episode. An interval of 12 wk without symptoms in between two attacks was required. All the aforementioned criteria were required to confirm a recurrent diverticulitis (including an abdominal CT). The Hinchey classification[23], or its modified versions[24], was used to stage complicated diverticulitis. In addition, we considered a fistula and a stenosis as a complicated attack[18].

Recent advances in the understanding of diverticular pathophysiology and NH have led to substantial changes in diverticulitis treatment guidelines[21].

We have recently published a large prospective single center cohort study focusing on the NH of sigmoid diverticulitis[17]. We demonstrated that, after a first episode of simple diverticulitis, the overall recurrence rate was 16%, and that 87% of recurrences were of similar severity (Figure 1). Of note, four patients only (1.4%) underwent emergency surgery for complicated (Hinchey stages III/IV) diverticulitis. The main predictor of recurrence after a first attack was a serum CRP > 240 mg/L. Subsequently, 23 (8.2%) patients proceeded to an elective laparoscopic sigmoid colectomy because of chronic symptoms. In addition, as reported by others, the highest risk of recurrence was within the first year (10%) and dropped to approximately 3% in the years thereafter[25,26]. 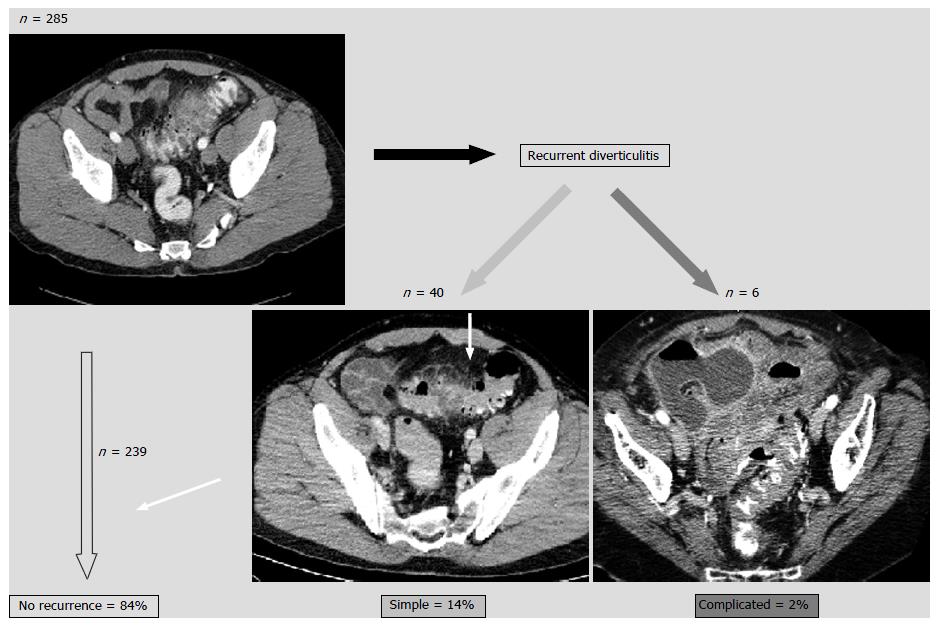 In series without adequate imaging with CT scan as a prerequisite for inclusion, recurrence rates ranged from 13% to 47% (Table 1), depending on the definition used by the authors. Two United States series using large administrative databases have reported recurrence rates between 13% and 19%, which is in accordance with the results from our institution[17] and from other centers[27,28]. Indeed, in a study population of 3165 patients with acute diverticulitis, Broderick-Villa et al[28] reported a recurrence rate of 13.3% after a follow-up of 8.9 years. Less than 4% presented with a second recurrence, as others have shown[26].

Among the different risk factors for recurrence, age has often been mentioned (Table 1)[15,36]. In the past, sigmoidectomy was advocated in young patients (< 50 years at the first episode)[37]. But, younger patients have a similar absolute risk of recurrence, and a higher lifetime risk[10]. Buchs et al[17] do not agree with the general thought that younger patients has more aggressive diverticulitis, as suggested by others[26,36,38-40]. We agree the recent shift towards a more conservative management of diverticulitis is effective for all the different age groups. There is no evidence that younger patients should be treated differently from older patients[5,18].

The gravity of inflammation (measured by the CRP level) is associated with a higher probability of recurrence, as shown in our series[17]. The risk of recurrence at 6 mo was 22% for patients with CRP > 240 mg/L during their initial episode. Recently, CRP was seen as an interesting marker in simple cases of sigmoid diverticulitis. A level higher than 200 mg/L can be associated with local complication[41,42]. We recently proposed that the diagnostic criteria for diverticulitis should include CRP[22]. In our series, free pelvic fluid seen on CT was not associated with further recurrence. However, the discovery of a pneumoperitoneum was of borderline significance. Others groups have reported risk factors for recurrence, including: Age younger than 40 (or 50), a history of a least 3 episodes of acute diverticulitis, medical vs surgical management, male patients, radiological signs of complicated first episode (abscess formation and extra-colonic contrast or gas), higher comorbidity index, family history of diverticulitis, and length of involved colon > 5 cm[16,27,28,36,43,44].

In addition, risk factors for the development of complicated diverticulitis include smoking, non-steroidal anti-inflammatory drugs use, renal failure, organ transplants and steroid use[10].

After the resolution of an episode of diverticulitis, a variety of medical therapies have been used to prevent future attacks. Supplemental fiber, antispasmodics, rifaximin, Mesalamine 5-aminosalicyclic acid (5-ASA), and probiotics have all been studied. These studies included heterogeneous patients however the history of diverticulitis was poorly characterized[5]. 5-ASA has been reported to reduce the risk of recurrent symptomatic diverticular disease[10], but there is no evidence that it may prevent recurrent diverticulitis. A recent randomized controlled trial showed that 5-ASA did not reduce the risk of recurrence or time to recurrence. The proportion of patients requiring surgery was comparable among 5-ASA and placebo groups[45]. Whilst a protective benefit for these agents has been suggested, their role in prevention of diverticulitis remains to be properly defined[5,46].

This review has some limitations. First, most of the studies consider only individuals who received in-hospital treatment, and it is known that 50% of diverticulitis patients are safely managed in an outpatient setting[18,47]. There is a risk of bias in considering for inclusion the most severe cases of diverticulitis. Second, longer follow-up is needed to draw definitive conclusions. Finally, the clear lack of uniformity in terminology results in difficulties interpreting and comparing findings between studies.

In conclusion, we have demonstrated the benign nature of simple sigmoid diverticulitis in the vast majority of cases, with a low rate of recurrence, and most importantly a very low rate of subsequent peritonitis requiring emergency surgery. The risk of complication after sigmoidectomy for simple diverticulitis is probably superior than the risk to develop a complication related to the disease itself. And surgery does not completely protect against recurrence[36]. The old rationale for elective surgery as a preventive treatment, based mainly on concerns that recurrence would result in progressively increased risk of sepsis or the need of colostomy[21], is thus not supported by current series.