Foreign bodies are rare causes of appendicitis and, in most cases, ingested foreign bodies pass through the alimentary tract asymptomatically. However, ingested foreign bodies may sometimes remain silent within the appendix for many years without an inflammatory response. Despite the fact that cases of foreign-body-induced appendicitis have been documented, sharp and pointed objects are more likely to cause perforations and abscesses, and present more rapidly after ingestion. Various materials, such as needles and drill bits, as well as organic matter, such as seeds, have been implicated as causes of acute appendicitis. Clinical presentation can vary from hours to years. Blunt foreign bodies are more likely to remain dormant for longer periods and cause appendicitis through obstruction of the appendiceal lumen. We herein describe a patient presenting with a foreign body in his appendix which had been swallowed 15 years previously. The contrast between the large size of the foreign body, the long clinical history without symptoms and the total absence of any histological inflammation was notable. We suggest that an elective laparoscopic appendectomy should be offered to such patients as a possible management option.

Core tip: To our knowledge this is the first case of a marrowbone within an appendix with a delayed presentation which was adequately recognized and treated laparoscopically. Our case showed a unique clinical picture in which a bizarre foreign body remained dormant within the appendix for 15 years. This case could offer a possible diagnostic and therapeutic option for appropriately treating patients with foreign bodies within the appendix.

Foreign body ingestion occurs in more than 100000 patients annually in the United States alone[1]. More than 80% of these occur in the pediatric population with 98% being accidental. The vast majority of objects reaching the stomach pass through the gastrointestinal tract spontaneously with no consequence; therefore, fewer than 1% of these objects require surgical intervention[2]. The primary pathology is due to luminal obstruction while foreign bodies are seldom the cause of appendicitis[2] which presents in the intraluminal exogenous body in only 0.005% of cases[3].

Many foreign bodies in the appendix, such as seeds[4], or steel[5-11] or lead[12,13] objects, dental prosthetic material[14,15], etc.,[16] have been described in the literature. Long, pointed, thin, sharp and stiff objects are more prone to cause perforation (in the appendix as well as in the duodenum and ileum) and are defined as risky while round and smooth objects have a lower risk of causing perforation. They may however, lead to complications from a secondary obstruction due to a fecal coating and appendiceal lumen obstruction[3]. In fact, it seems that 3% of fecaliths contain foreign bodies[17]. In most cases, foreign bodies generate appendicitis in a few hours, a few days or at most a few months[5,7,8,10,11,18].

However, there are rare cases in which a foreign body leads to appendicitis after many years[6,19,20].

A 45-year-old Caucasian man presented to the Emergency Department with mild lower right-side abdominal pain. On examination, clinical findings suggested acute appendicitis with predominant right iliac fossa tenderness but without definite peritonism. His laboratory work-up was normal, and he was afebrile. In abdominal ultrasound scans, the organs examined appeared normal with no signs of acute appendicitis.

Eight months later, the patient was re-evaluated in an outpatient setting. He was interrogated again and reported that he had eaten rice with saffron and marrowbone, a traditional Northern Italian dish, approximately 15 years previously and, while he was swallowing his last mouthful, he accidently ingested a marrowbone. For these reasons, he was hospitalized. His preoperative laboratory work-up was normal. An abdominal X-ray revealed a rounded radio-opaque formation in the right iliac fossa (Figure 1A). Computed tomography revealed the presence of a massive roundish-filling defect of about 2.5 cm × 3.0 cm in the right iliac fossa, identified as diaphyseal-type bone tissue, probably within the proximal portion of the appendix which appeared dilated (12 mm in diameter) (Figure 1B). Exploratory laparoscopy of the abdomen revealed an abnormally dilated appendix due to the presence of a foreign body (Figure 1C). A laparoscopic appendectomy was, therefore, performed. Surprisingly, the specimen removed (Figure 1D) consisted of a marrowbone included in a calcified fecaloma in the lumen of the appendix. There were no postoperative complications and the patient was discharged 2 d after surgery. Histological examination of the specimen revealed a slight muscle hypertrophy of the appendiceal wall due to the chronic decubitus of the foreign body, without signs of inflammation. 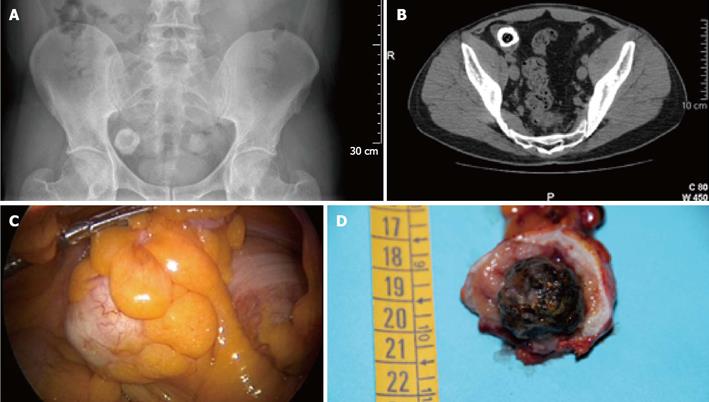 The presence of foreign bodies in the gastrointestinal tract rarely causes complications and their presence within the appendix is a very rare event. Probably, if the weight of the foreign body is greater than that of the bowel fluid content, its movement is arrested in the cecum during transit where it gravitates towards the lower portion[3]. The appendiceal orifice expands and allows entry into its lumen. Only in a retrocecal appendix is there almost no possibility of an object entering into the lumen[21] while any other part of the appendix allows free access. Once in the appendix, peristaltic action is insufficient to expel bodies back into the cecum[3]. This is the reason why, in our case, the marrowbone had been stuck in the appendix for years, developing muscular hypertrophy without any signs of inflammation. The formation of a fecal coat probably prevented the development of inflammatory processes, making the patient essentially asymptomatic with occasional mild pain, probably due mainly to mechanical rather than inflammatory insults.

The use of diagnostic laparoscopy for the management of foreign bodies in the gastrointestinal tract as well as in appendix[3,5] has been well described by previous authors[22,23]. Although the advantages of laparoscopic appendectomy have been established for young females of reproductive age and for obese patients[24], in the male population, the technique seems to be at least as safe and effective as the open procedure. For this reason, laparoscopic appendectomy may be useful in the management of foreign bodies in the appendix.

Furthermore, this procedure has also been described in the literature as feasible for foreign bodies in other abdominal locations[25-28].

Rare cases in which a foreign body in the appendix does not generate inflammation have also been described in the literature. In a prospective study involving 62 Eskimo patients[29] having lead shot in the appendix, none had developed clinical evidence of appendicitis, even after 13 years and, in 8 cases where the appendix had been removed, a histologically normal appendix was found. Sian et al[13] also reported a case in which 27 lead shot pellets were found in the appendix of a 45-year-old patient who had eaten pigeons in childhood but no inflammation was present. It is therefore possible, although rare, that a foreign body in the appendix even after many years (in our case, 15 years) does not lead to an authentic appendicitis either histologically or clinically.

Foreign bodies in the appendix and in the absence of flogistic reactions are rare. Laparoscopic appendectomy has been shown to be a reliable and safe diagnostic and therapeutic method in elective surgery, even in cases of large foreign bodies.