We report a case of adult intussusception caused by cecal adenocarcinoma that was treated by laparoscopy-assisted ileocecal resection following reduction by contrast enema and preoperative colonoscopy. A 68-year-old male with cecal cancer was admitted to our hospital because of colicky abdominal pain after taking a laxative. His abdomen was distended, and a mass was palpable in the right upper quadrant, which appeared as a target- or sausage-shaped lesion by ultrasonograhpy and computed tomography. A contrast enema using water-soluble material showed a cup-shaped filling defect characterized by intussusception in the ascending colon. This round defect with a clear margin was pushed gradually back into the cecum by the enema pressure. Re-occurrence of the intussusception is easily released by colonoscopy. We performed laparoscopy-assisted ileocecal resection of a protruding tumor measuring 6.5 cm × 5.0 cm × 3.5 cm from the cecum, with D3 lymph node dissection. Histological examination revealed a well-differentiated adenocarcinoma that had invaded the serosa without permeating the lymphatic or venous capillaries, as well as lymph node metastasis. The postoperative course was uneventful, and the patient has been well without evidence of disease recurrence for 5 years following the operation. Preliminary reduction of adult colonic intussusception before surgical resection is therefore an option in cases of an early and correct diagnosis of intussusception.

The diagnosis of intussusception can be elusive for a long period because of the varied presenting symptoms and time course, and is frequently only established during laparotomy to investigate the obstructive symptoms[2,5]. Treatment of intussusception usually requires resection of the involved bowel segment, although reduction is possible if the segment involved is viable. However, such approaches to treating intussusception remain controversial, particularly in the colon where there is a high likelihood of an originating neoplasm[5,6].

We report a case of a 68-year-old male with cecal intussusception who was safely treated by laparoscopy-assisted ileocecal resection following preoperative reduction by water-soluble contrast enema and colonoscopy (CS).

A 68-year-old Japanese male visited a local clinician for abdominal pain sustained for 6 mo. CS revealed a cecal mass that proved to be an adenocarcinoma on biopsy, and the patient was referred to our hospital. He had been well with an unremarkable clinical history to that point. Although he was scheduled for elective ileocecal resection, he presented to our hospital with colicky intermittent abdominal pain after taking a laxative. Physical examination revealed a distended and mildly painful abdomen, with a palpable mass and tenderness in the right upper quadrant. Serum carcinoembryonic antigen (CEA) was high (4.8 ng/mL; normal range, < 3.4 ng/mL), but the other laboratory findings were almost within normal limits.

Ultrasonography of the mass in the right upper quadrant revealed a pattern of multiple concentric rings characteristic of intussusception (Figure 1). Computed tomography (CT) of the abdomen with intravenous contrast medium revealed a sausage-shaped soft tissue mass consisting of the outer intussuscipiens and the central intussusceptum, and containing mesenteric fat and mesenteric blood vessels (Figure 2). A water-soluble contrast-material enema showed an intralumenal, smooth, spherical filling defect representing the leading edge of the intussuscepted bowel at the proximal region of the ascending colon (Figure 3A). The pressure of enema succeeded in gradually moving the cecum (intussusceptum) outward from the ascending colon (intussuscipiens) (Figure 3B-D). Subsequent CS revealed a protruding mass at the leading point of intussusception in the ascending colon that was easily reduced. The patient then underwent laparoscopy-assisted ileocecal resection of the tumor with D3 lymph node dissection and primary anastomosis. The intussusception was released, and there were no ascites, swollen lymph nodes, or peritoneal disseminations. 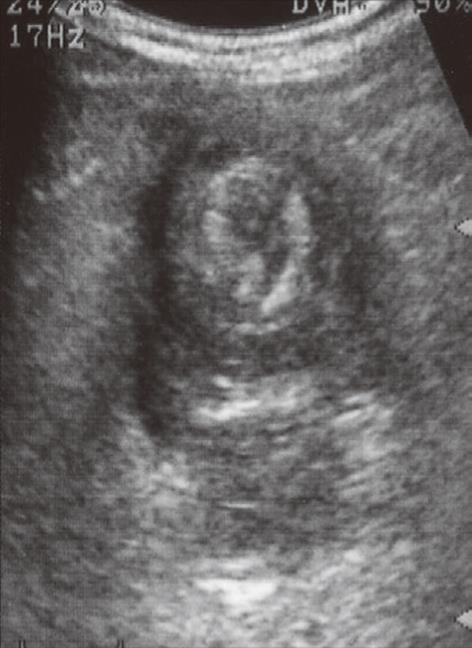 Figure 1 Abdominal ultrasonography of the right hypochondrium showing a target-like mass appearing as multiple concentric rings, which is suggestive of intussusception. 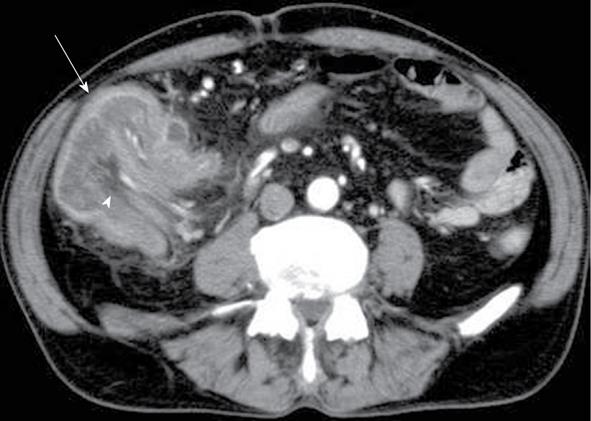 Figure 3 A water-soluble contrast enema showed a cup-shaped filling defect caused by the intussusception in the right upper quadrant (A); the cecum (intussusceptum) with the tumor was gradually pushed outward from the ascending colon (intussuscipiens) by the enema pressure (B and C); and finally, the intussusception was reduced, and contrast material could flow into the terminal ileum (D).

Gross inspection of the resected specimen revealed a round, granular-surfaced tumor, measuring 6.5 cm × 5.0 cm × 3.5 cm, and protruding into the lumen. Histologically, the lesions were all well differentiated tubular adenocarcinomas that were invading the serosa (T3) without permeation of the lymphatic or venous capillaries. No lymph node metastasis was seen (Stage II), and the patient was followed up without adjuvant chemotherapy. The postoperative course was uneventful, and he has been well without evidence of disease recurrence for 5 years following the operation.

Intussusception of the bowel is defined as the telescoping of a proximal segment of the gastrointestinal tract within the lumen of an adjacent segment[1]. Intussusception in the adult is a rare entity that differs greatly in etiology compared with that seen in the pediatric population. We successfully treated a case of adult intussusception due to cecal adenocarcinoma using contrast enema and colonoscopy for reduction followed by laparoscopy-assisted ileocecal resection.

Intestinal intussusception can be classified according to location (small intestine or colon) or according to the underlying etiology [neoplastic (benign or malignant), non-neoplastic, or idiopathic]. In adults, 80%-90% of intussusceptions are secondary to an underlying pathology, with approximately 65% due to benign or malignant neoplasm[7,9]. The incidence of malignancy is particularly high with colonic intussusception, at 50%-71%[9,12]. Intussusception in the colon and the presence of anemia are also regarded as independent preoperative predictors of malignancy[12]. When intussusception is suspected, water-soluble contrast enema is useful for diagnosis, on finding the characteristic cup-shaped filling defect, and for treatment due to the enema pressure.

The downsides of reduction prior to resection include the theoretical risk of intralumenal tumor seeding, reduction of externally viable bowel despite mucosal necrosis, venous embolization of malignant cells, spillage of succus through inadvertent perforation, and anastomotic complication in cases of an edematous and weakened bowel[10]. However, while there are theoretic concerns, no rigorous studies have satisfactorily resolved this issue. In the present case, we chose preoperative reduction before resection due to the short time between symptom presentation and diagnosis as intussusception. As result, the patient was able to undergo laparoscopy-assisted surgery, and has been well without evidence of complications of recurrence for 5 years following the operation.

It should be noted, however, that because most patients with intussusception present with long-standing and varied symptoms, reductions prior to resection are probably suitable only in a limited number of cases[1,16,17], such as in adult colonic intussusception presented at an early stage. Most cases will require treatment by conventional open surgery.

In conclusion, intussusception occurs rarely in adults. It has a characteristic appearance by ultrasonography and CT, and comprises edematous bowel wall and lumenal mesentery. This study indicates that cases of short-duration adult intussusception, even at colonic sites, could be effectively treated by preoperative reduction followed by minimally invasive surgery using laparoscopy, thus avoiding extensive and invasive resection.