METHODS: The literature search included PubMed, EMBASE, Cochrane Library and OVID original studies on the topic of AFP compared to MAF for complex fistula-in-ano that had a deadline for publication by April 2011. Randomized controlled trials, controlled clinical trials and prospective cohort studies were included in the review. After information collection, a meta-analysis was performed using data on overall success rates as well as incidence of incontinence and morbidity. The quality of postoperative life was also included with the clinical results.

Conventional surgery includes the fistulotomy, with loose and cutting setons. All of such techniques have disappointing success rates and a high risk of incontinence. Therefore, some sphincter preservation procedures have been developed. The mucosa advancement flap (MAF), recently considered the best available treatment option for complex fistulas, results in a success rate of about 60%[5,6]. This procedure is technically demanding and may affect continence[7]. Use of fibrin glue is an alternative to the MAF; however, the long-term closure rates are low[8-12].

A fistula was considered “complex” when the fistula was high [suprasphicteric, extrasphincteric or high-trans-sphincteric (track crosses > 30%-50% of external sphincter)], was anterior in a female, had multiple tracts, or the patient had pre-existing incontinence, a history of local irradiation, or Crohn’s disease. Fistulas with multiple tracts were defined as a fistula with a single primary and multiple secondary openings.

Data on the type of trial, total number of patients treated, follow-up period, overall success rates with the AFP and MAF, recurrent disease, sepsis/abscess formation in the postoperative period, plug extrusion rate, total number of patients with incontinence and postoperative quality of life were extracted by two independent reviewers from the studies included. Discrepancies were resolved by discussion between reviewers.

Statistical analysis was carried out using Review Manager (version 5.1) provided by The Cochrane Collaboration. Dichotomous data are presented as the risk difference (RD) and continuous outcomes as the weighted mean difference, both with 95%CI. The overall effect was tested using Z scores and significance was set at P < 0.05. The meta-analysis was performed using fixed-effect or random-effect methods, depending on the absence or presence of significant heterogeneity[15]. Statistical heterogeneity between trials was evaluated by the χ2 and I2 tests and significance was set at P < 0.10. In the absence of statistically significant heterogeneity, the fixed-effect method was used to combine the results. When heterogeneity was confirmed (P≤ 0.10), the random-effect method was used. No sensitivity analysis was performed.

The searches identified a total of 126 studies. Three “Letters to the Editor” were excluded from the analysis. By scanning titles and abstracts, 116 redundant publications, reviews and case reports were excluded. After reviewing full texts, one study without available data was removed from consideration. A total of six studies that involved 408 patients were included in the meta-analysis (Figure 1). 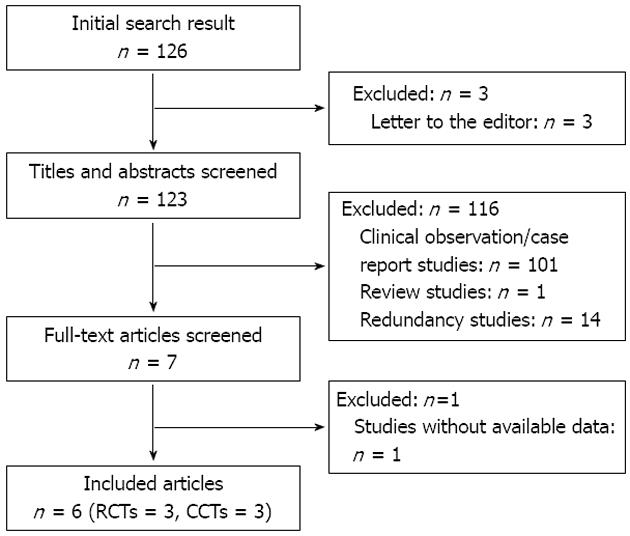 The characteristics of the six included studies are shown in Table 1. Three of the trials were randomized using computer randomization[16-18]. Two of the RCTs[16,17] described the method of allocation concealment and blinding. During the follow-up, one study[18] had one patient lost (one patient in the AFP group), and the other studies[16,17] had no patient lost to follow-up. One study[16] described the method used for data recording and analysis. Two of the trials[19,20] were retrospective studies, and one of the trials[21] compared the healing and complication rates of a prospective cohort of AFP patients to a retrospective cohort of patients that underwent the endo-anal advancement flap procedure.

All the trials excluded patients with recto-vaginal fistulas, recto-urethral fistulas, sepsis, patients that were human immunodeficiency virus positive, and those with fistulas related to Crohn’s disease, ulcerative colitis, tuberculosis, prior surgery and malignancies. Patients with severe cardiovascular disease, diabetes or a pregnancy were also excluded. 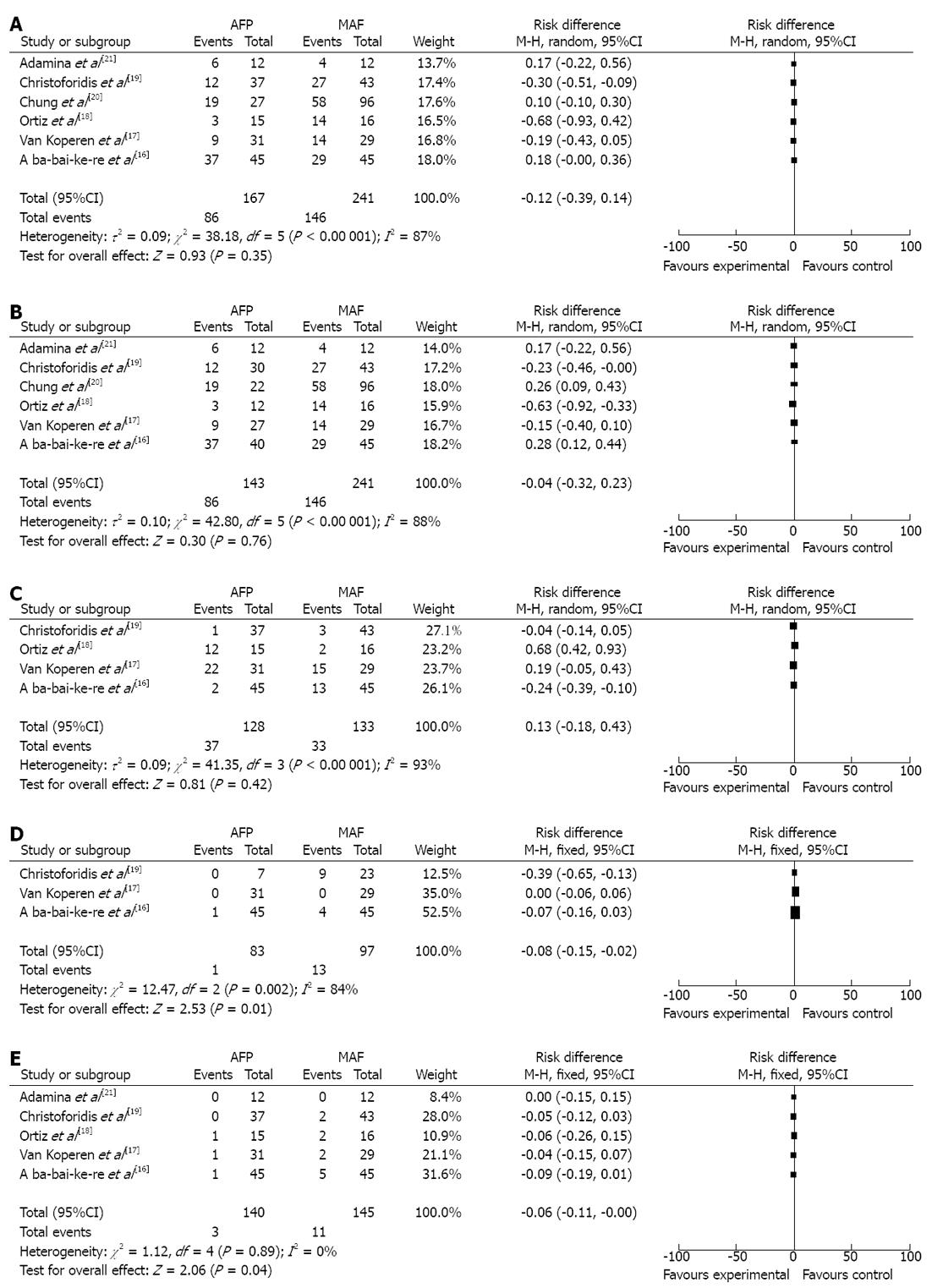 Plug extrusion was a common finding during the early postoperative period. In the studiesincluded, plug extrusion ranged from 11.1% to 18.9%. Including these patients for analysis could decrease the success rate of the AFP. After excluding those patients that had the plug extruded, a modified analysis was performed and no statistically significant difference was found (RD = -0.004, 95%CI: -0.32 - 0.23) (Figure 2B).

Comparisons of postoperative complications: Three studies[16,17,19] reported on postoperative incontinence rates. One study[16] used the Wexner score and Vaizey scale[22] to evaluate continence, at the same time, another study[17] used colorectal functional outcomes[23]. Yet another study[19] assessed continence using the Cleveland Clinic Florida-Fecal Incontinence score. According to the results of the heterogeneity analysis (χ2 = 0.29, df = 1, P = 0.66, I2 = 0%), the random-effect method was used. The findings indicated that the rate of postoperative incontinence was lower with the AFP than the MAF procedure (RD = -0.08, 95%CI: -0.15 - -0.02) (Figure 2D).

According to the results of the present meta-analysis, the difference in the overall healing rate between the AFP and the MAF in patients with a complex anal fistula was not statistically significant (RD = -0.12, 95%CI: -0.39 - 0.14). At the end of the follow-up, the recurrence rate for the AFP group was from 2.7% to 80.0%, and was from 7.0% to 51.7% in the MAF group, the difference was not statistically significant (P = 0.42). Although it is routine to secure the AFP, at the internal opening, with absorbable sutures, plug extrusion, which ranges from 4% to 41%, is a common occurrence. In the studies included, the plug extrusion rate was from 11.1% to 18.9%. If the plug-extruded cases are excluded, the patient cure rate range increases to 25.0% to 92.5%. However, the success rates of the two treatments still showed no statistically significant difference (RD = -0.004, 95%CI: -0.32 - 0.23).

Impairment of continence is the main complication after surgical treatment of anal fistulas. The MAF is associated with a higher morbidity and significant risk of worsening incontinence (0%-52%)[36-39]. The AFP is associated with less damage. After flushing the fistula tract with hydrogen peroxide, the AFP is inserted through the tract with the wide end of the plug wedged firmly in the internal opening of the fistula tract. This procedure, with less potential damage to the sphincter muscle, is likely to have a better outcome. The data from the studies included shows that both morbidity (RD = -0.06, 95%CI: -0.11 - -0.00) and incontinence (RD = -0.08, 95%CI: -0.15 - -0.02) were lower in the AFP group.

Fistula-in-ano is a common condition. It has an incidence of 5.6 per 100 000 in women and 12.3 per 100 000 in men. This disorder is reported to occur predominantly during the third and fourth decades of life; most cases are of cryptoglandular origin. Treatment of high tanssphincteric fistulas continues to be a challenge.