Ingestion of a foreign body is a frequent and well-known medical problem with several diagnostic and therapeutic approaches. Usually, ingested foreign bodies pass through the alimentary tract without incident. In some cases, they can be lodged in the appendix and may cause appendicitis. We report a case of a 29-year old woman, suffering from mental illness, with a safety pin lodged in the appendix. Initially, the patient consulted for abdominal pain. After a period of waiting, during which time the foreign body did not move, a colonoscopy was performed but failed to see the safety pin. Then, the patient underwent a laparoscopic appendectomy. Pathological examination showed an ulcerative appendicitis.

Foreign body ingestion is a frequent gastrointestinal entity. However, a safety pin located in the appendix is rather rarely reported, especially among adults. More than 200 cases of foreign bodies within the appendix have been reported, mainly in children[1]. Foreign bodies inducing appendicitis can occur with blunt objects but rarely with sharp or pointed objects. In many cases, an interventional procedure is necessary[1-3]. Most of the time, foreign bodies found in adults are fishbones, lead bullets or tooth crowns. Our case concerns a 29-year old female suffering from a psychiatric illness who voluntarily swallowed a safety pin.

A 29-year old woman came to the emergency room with abdominal pain. She was suffering from Prader-Willi syndrome, responsible for obesity and auto-aggressive behavior. Communication with the patient was uneasy but she claimed to have intentionally ingested a safety pin 6 mo earlier. She had no fever and the abdominal examination was normal. An abdominal radiograph showed a metallic foreign body in the right lower quadrant (Figure 1). Blood test was normal. 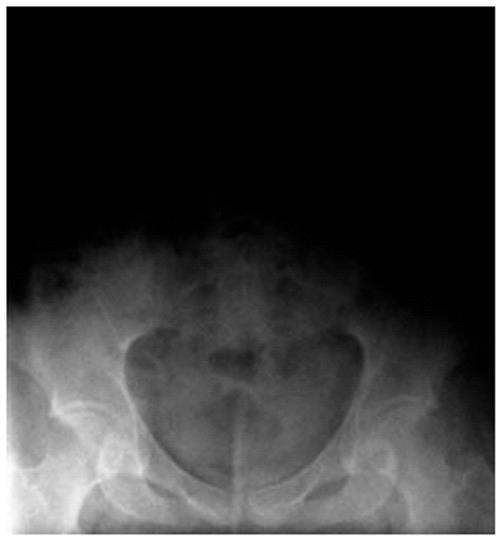 We first decided to follow the progression of this foreign body by successive x-rays but in the month following admission to the emergency room, the position remained unchanged. A computed tomographic scan of the abdomen with reconstruction was also performed, showing a needle in front of the Bauhin’s valve with no signs of local inflammation (Figures 2 and 3). 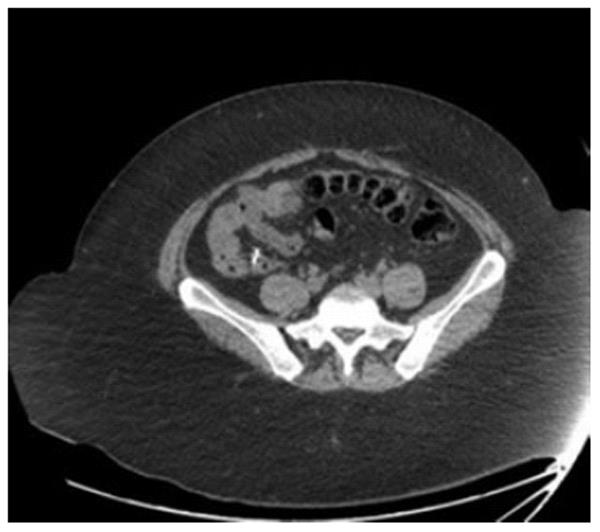 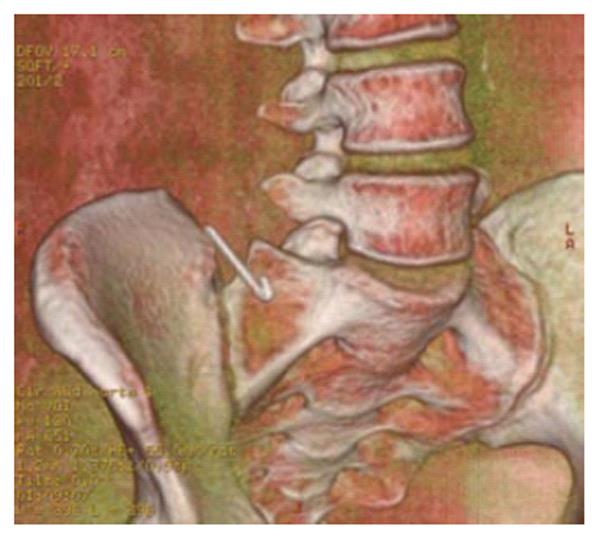 Then, we decided to perform an endoscopy. But, because it was impossible to go through the Bauhin’s valve, this examination resulted in neither the retrieval nor visualisation of the foreign body.

Finally, we decided to perform a laparoscopic exploration that allowed us to visualize a slightly thickened and inflamed appendix. Appendectomy was performed in one piece with endoscopic mechanical staplers. The pathological examination showed a 5-cm long and 0.9-cm wide appendix with half a safety pin stuck inside (Figure 4). Microscopic examination showed an ulcerative appendicitis. The patient was discharged 3 d after surgery, with no post-operative complications. 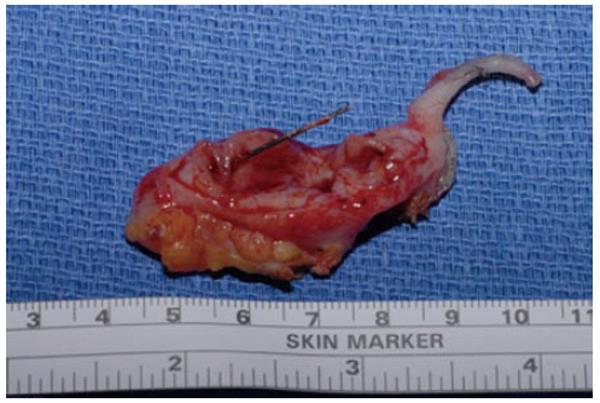 Figure 4 Pathological examination of the appendix, confirming the presence of the safety pin.
DISCUSSION

An ingested foreign body causing appendicitis is a rare issue, with a prevalence of only 0.0005%[4]. This condition is mostly reported in children. In adults, the swallowing is usually involuntary (seamstresses swallowing needles by accident, bullets found in meat, dental drill bit) and is discovered in an emergency. Nevertheless, clinical signs can vary from hours to years[2,4]. In this particular case, the swallowing was voluntary due to mental illness in a 29-year old woman, with a delayed discovery of 6 mo.

The management of foreign body ingestions with no symptoms is still controversial. In most cases, ingested foreign bodies pass through the alimentary tract without any incidents. The length of the process depends on the shape and weight of the object[5].

According to Klinger et al[1], endoscopic retrieval by gastroscopy can be attempted in an emergency. If it is unsuccessful or impossible, serial radiographs and white blood cell counts are performed. Sometimes, polyethylene glycol administration can help the passage of the foreign body.

If the foreign body remains in the right lower abdominal quadrant, especially when sharp, stiff, thin, pointed and long, a colonoscopy is necessary to try to remove it. Indeed, sharp and pointed objects are more likely to cause visceral perforation or abscesses, usually within days of ingestion. The risk of becoming symptomatic is 93% of cases for sharp foreign bodies, with inflammation in 88% and perforation in 70% of cases.

Cases of blunt foreign bodies can remain asymptomatic for a long period of time and may cause appendicitis in 66%[5]. In every case, if blood tests results show inflammation, removal becomes urgent. If the endoscopic approach fails, laparoscopy under fluoroscopy should be carried out to localize and remove the foreign body[1]. In this case, we followed that therapeutic sequence. Finally, because of the risk of perforation and since there was no spontaneous passage of the object and the endoscopy had been unsuccessful, a laparoscopic appendectomy was necessary to remove the safety pin. Fluoroscopic guidance was not necessary because laparoscopic exploration showed an appendicular inflammation. Furthermore, this situation was unusual because the pointed and sharp object had remained dormant and was revealed by a chronic appendicitis and not by a perforation.