The impact of obesity on surgical outcomes in elderly patients candidate for liver surgery is still debated.

The present study showed that BMI did not impact perioperative and oncologic outcomes in elderly patients treated by laparoscopic resection for HCC.

Core Tip: In order to evaluate the impact of a high body mass index (BMI) in elderly patients who underwent laparoscopic resection for hepatocellular carcinoma (HCC), we compared perioperative data and long-term outcomes from 10 European centers before and after propensity score matching. The present study showed that BMI did not impact perioperative and oncologic outcomes in elderly patients treated by laparoscopic resection for HCC.

Obesity is a significant contributing factor for the development of liver disease, starting from the stage of non-alcoholic steatohepatitis up to cirrhosis and hepatocellular carcinoma (HCC)[1-4]. Due to the constant increase of population aging, the treatment of HCC in elderly obese patient has become a global clinical issue[5]. Laparoscopic liver resection (LLR) provides the benefits of minimally invasive approach in terms of short-term outcomes[6,7], guaranteeing oncological results comparable to the open surgical approach[8,9]. However, data about the impact of obesity in patients undergoing LLR remain controversial, with some studies reporting higher body mass index (BMI) as a predictor of an adverse postoperative outcome[10] and other studies not reporting an increased risk of postoperative morbidity linked to obesity[11]. The aim of this study was to evaluate the impact of BMI in elderly patients undergoing LLR for HCC, by comparing short- and long-term outcomes.

This study investigated patients resected for HCC demonstrating the following inclusion criteria: Child-Pugh class A and B disease; age ≥ 70 years; no evidence of major vessel branch invasion and no distant metastases. Based on the World HealthOrganization (WHO) definition of obesity (BMI > 30 kg/m2)[12] patients were divided in two groups: BMI < 30 kg/m2 group and BMI > 30 kg/m2 group.

The diagnosis of HCC was done, according to the European Association for Study of Liver (EASL) consensus criteria[13], based on non-invasive findings or histopathology. The type of treatment was planned following multidisciplinary tumor board discussions.

The surgical procedure was planned based on tumor features and liver function. Minor and major liver resections were performed according Brisbane classification[14]. The choice of position and the size of trocars depended by tumor location. Intraoperative ultrasonography represented a standardized initial step of surgical procedure. Liver parenchymal transection was performed with laparoscopic instruments using various energy devices such as the cavitation ultrasonic surgical aspirator ultrasonic, monopolar and bipolar forceps. The extent of resection depended on the size and anatomical location of the tumor and they were defined as “minor” for the resection of two or fewer Couinaud’s liver segments, and ‘major’ for the resection ≥ 3 liver segments. The hepatic hilum was prepared for the Pringle’s maneuver. The specimen was placed in an endocatch bag and removed from one of the trocars’ incision sites.

Short-term outcomes after liver resection included the evaluation of the parameters in the perioperative period, including intraoperative variables such as operative time, and blood transfusion rate, and postoperative variables as complications rate (based on the Clavien-Dindo classification[15]), and length of hospitalization. Long-term outcomes included oncological results in terms of overall survival and disease-free survival (DFS). Liver blood tests were assessed on first, third and fifth postoperative day. Follow-up was performed once every 3 mo during the first year and every 4 mo thereafter with CT-scan and blood tests (including liver function and oncologic markers). Recurrence after treatment included repeat resection, locoregional treatment, till liver transplantation, or supportive care based on the patient’s general status and liver disease according to the EASL-EORTC clinical practice guidelines[13].

Statistical analyses were carried out using the IBM SPSS Statistics 20 software. The t-test and Mann-Whitney U test were used to compare continuous variables. The chi-square test and Kruskal-Wallis test respectively was performed to compare categorical variables. The Kaplan-Meier method was used to assess recurrence-free survival (RFS) and overall survival (OS) curves. The Cox proportional hazard model was performed to analyse independent prognostic factors of longterm survival. A propensity score matching (PSM) analysis was performed to reduce selection bias obtaining two more homogeneous matched groups of patients in the resection and ablation groups. Variables included in our propensity model included age, comorbidities ≥ 2, American Society of Anesthesiologists (ASA) score, Child-Pugh and model for end-stage liver disease (MELD) scores, extent of resection, tumor number and size. A one-to-one PSM was performed with a caliper width of < 0.2 of the pooled standard deviation of estimated propensity scores, applying these variables to a logistic regression model and calculated C-statistics. A total of 27 out of the 196 patients in the BMI < 30 group and a total of 27 out of the 28 patients in the BMI > 30 group were matched for further analyses. 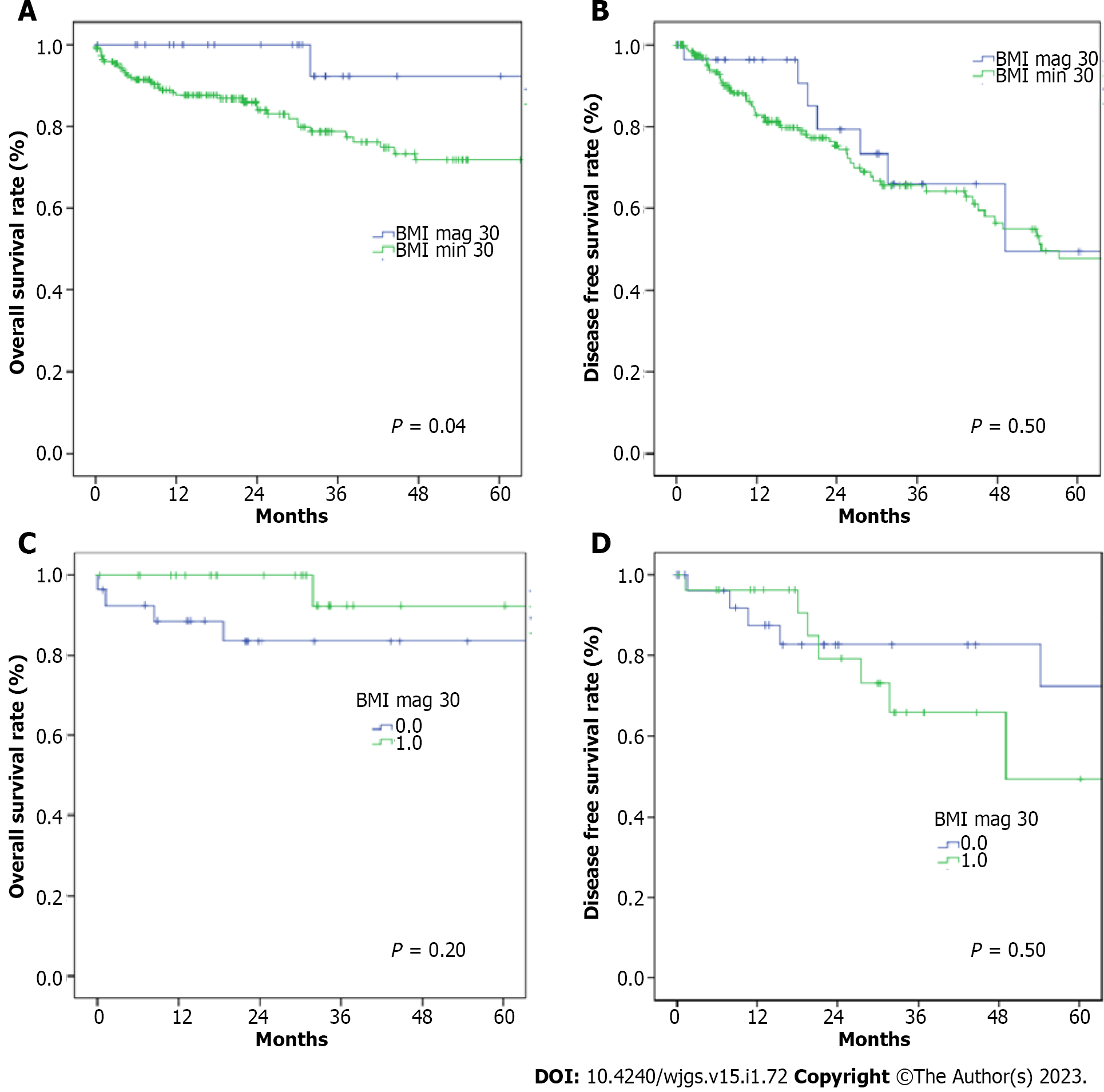 The impact of obesity on surgical results in elderly patients who underwent liver resections remains a subject of vivid debate. An increased surgical risk has been expected because of comorbidities, associated to obesity and old age, underlying liver disease and technical difficulties[16-20]. Our multicenter study did not confirm this hypothesis and showed that LLR can be safely performed in treatment of HCC also in elderly patients with a BMI ≥ 30 kg/m2. The evaluation of the influence of BMI in elderly population is important because of the increasing prevalence of this condition associated to an higher average life expectancy[21,22].

The increasing BMI has been reported as a predisposition to develop various diseases, including diabetes mellitus, hypertension, respiratory disease and certain type of cancers[23-25]. Our data did not show differences in term of rate of comorbidities or tumor characteristics, even after PMS analysis, according to various preoperative parameters (age, comorbidities, ASA and MELD score, Child Pugh score, tumor size, and tumor number and extent of resection), which resulted in a more homogeneous and therefore comparable population.

Even though the initial hypothesis that obesity negatively affected the outcomes of minimally invasive approach was not verified[26], data regarding LLR in obese patients were controversial. After the evaluation of surgical procedures ended with Second International Consensus Conference on LLR[27], a scoring system was built to stratify LLR into groups with increasing degree of difficulty[28]. This IWATE score aimed to preoperatively predict, the technical difficulty of various LLR, but without including body habitus. So, the question whether anthropometric variables really have an impact on perioperative outcomes, remains.

View magnification of, optimal exposure with liver mobilization and the increase of dedicated tools allow a clearer visualization of deep structures, small vessels and biliary ducts[7,36,37]. The authors speculate this “power” of laparoscopy can justify a lower rate of postoperative complications not only in terms of preservation of abdominal wall integrity, linked with prevention on respiratory diseases and reduction of postoperative pain, but also with a greater accuracy in resection technique, especially in the hands of experienced surgeons.

Oncological outcomes following PSM were also similar, as no differences were noted in disease-free and overall survival in obese vs non-obese patients, undergoing LLR for HCC. This is also in accordance with in the majority of published data[34]. These results suggest that also elderly obese patients can benefit from surgical treatment in terms of long-term outcomes, mainly driven by the excellent short-term outcome of laparoscopy.

In conclusion, according to the present study, BMI does not impact surgical outcomes of LLR in elderly patients treated for HCC. Thorough patient selection, based on liver volume and function evaluation, as well as patient habitus and comorbidities, could result in safe and feasible LLR in elderly obese patients.

To evaluate of postoperative outcomes between elderly (age > 70 years) patients with a BMI ≥ 30 and BMI < 30 who underwent a LLR for hepatocellular carcinoma (HCC).

The analysis of short (perioperative) and long-term (oncological results) outcomes.

The analysis of data was performed before and after propensity score matching.

After propensity score matching, patients in two groups presented comparable results, in terms of operative time complications rate length of hospital stay. There are no significant differences in terms of short- and long-term postoperative results.

The present study showed that BMI did not impact perioperative and oncologic outcomes in elderly patients treated by laparoscopic resection for HCC.

Randomized controlled studies are needed to better explore these results.