Core Tip: The present case suggests that systemic thrombolysis should be safe and effective for acute extensive portal venous system thrombosis, if it is unresponsive to anticoagulation.

Acute portal venous system thrombosis (PVST) is potentially life-threatening and can achieve a good response to agitation thrombolysis combined with catheter-directed thrombolysis[1]. However, it should be acknowledged that systemic thrombolysis, a more convenient treatment approach, has been rarely attempted for the treatment of acute PVST in clinical practice due to its potential bleeding risk. Herein, we report a case of acute symptomatic extensive PVST successfully treated by systemic thrombolysis combined with anticoagulation to strengthen our confidence in its clinical efficacy and safety.

A 56-year-old man with a history of hepatitis B virus infection was admitted to the Department of Gastroenterology due to aggravating severe epigastric pain for nearly half a month. He had no other obvious medical history. On physical examinations, his abdomen was soft without abdominal tenderness, rebound, or tension. On day 1 of admission, laboratory tests were performed (Table 1). Contrast-enhanced computed tomography (CT) showed no contrast agent filling within all vessels of the portal venous system, including the main portal vein (MPV), right portal vein (RPV), left portal vein (LPV), confluence of the superior mesenteric vein (SMV) and splenic vein (SV), SMV, and SV (Figure 1A), suggesting a diagnosis of occlusive PVST. Thus, subcutaneous injection of enoxaparin sodium was immediately initiated at a dose of 5000 IU (62.5 IU/kg) twice daily. On day 5, his abdominal pain was not relieved. Anti-Xa level was 0.05 IU/mL (reference range: 0-0.1 IU/mL). Contrast-enhanced CT showed no significant improvement of PVST (Figure 1B). Thus, systemic thrombolysis was recommended. After obtaining this patient and his relatives’ informed consent, intravenous injection of urokinase at a dose of 300000 IU twice daily was added on subcutaneous injection of enoxaparin sodium at a dose of 5000 IU twice daily. On day 10, this patient's abdominal pain improved significantly. Contrast-enhanced CT showed that MPV, LPV, and RPV thromboses were partially recanalized (Figure 1C). On day 12, urokinase was discontinued. No bleeding event occurred during the period of systemic thrombolysis. On day 17, his abdominal pain completely disappeared. Then, he was discharged. Enoxaparin sodium was replaced with oral rivaroxaban 20 mg once daily. After 5-mo anticoagulation with rivaroxaban, contrast-enhanced CT showed that the SMV and SV became patent and fine collateral vessels developed around the RPV without signs of esophageal varices (Figure 1D). Laboratory tests were performed again (Table 1). At the time of writing this paper, rivaroxaban is still continued. 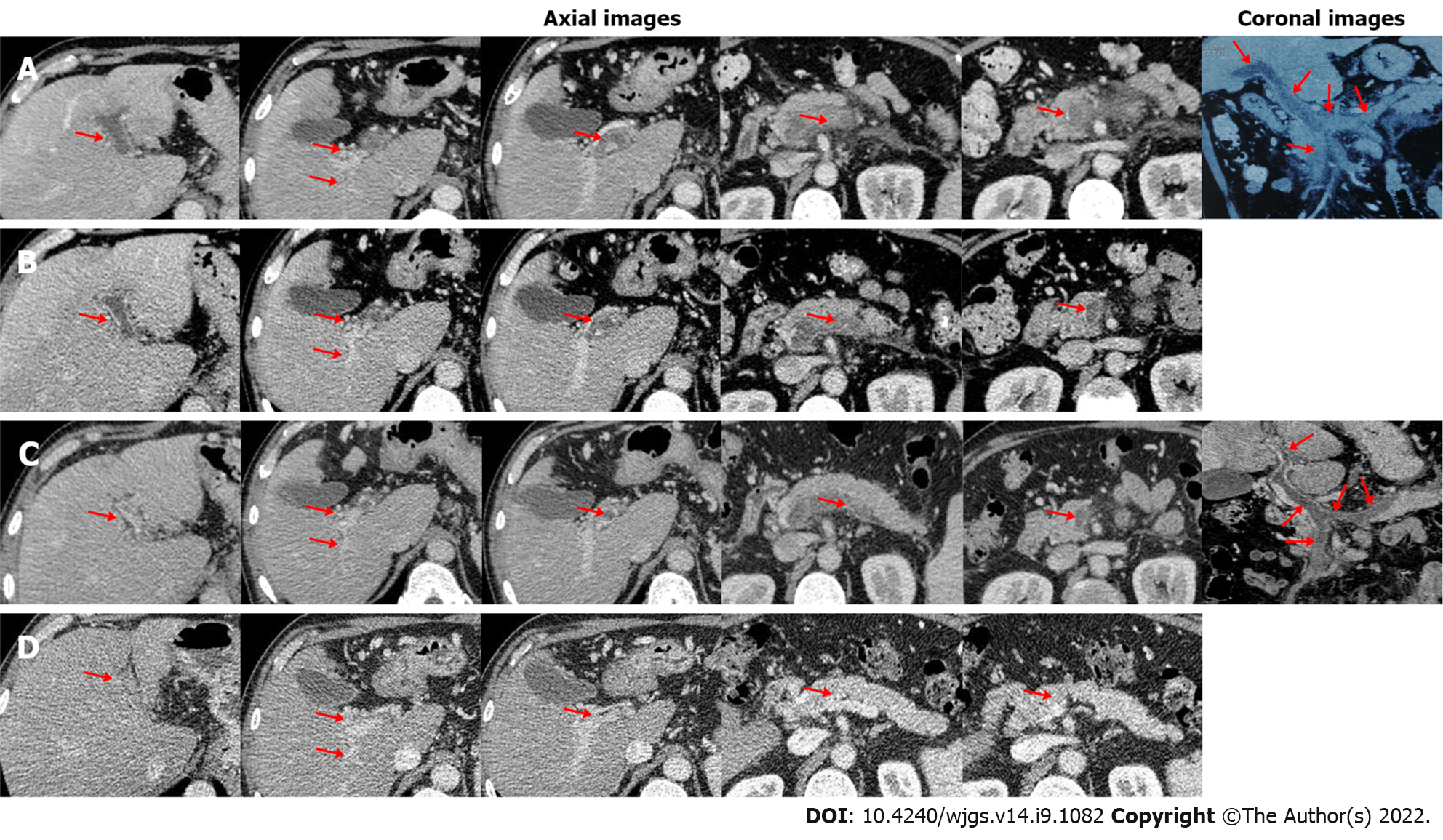 Anticoagulation is the preferred choice of treatment for acute PVST[2], but 18% of patients still develop transmural intestinal necrosis after anticoagulation therapy, and 25%-50% will develop pre-hepatic portal hypertension[3,4]. Patients with acute PVST who do not respond to anticoagulation therapy may benefit from thrombolytic therapy[5]. However, thrombolytic therapy has a higher risk of bleeding, including upper gastrointestinal bleeding, abdominal bleeding, and epistaxis. Notably, the current evidence on systemic thrombolytic therapy for PVST is scare. In a retrospective cohort study[6], 33 patients with acute PVST were treated with intravenous injection of 750000 IU/d streptokinase or 100-150 mg/6-12 h recombinant tissue-type plasminogen activator (rt-PA) for 2-3 d, followed with heparin infusion, and then received oral anticoagulants for 12 mo after discharge. Thrombosis recanalization was achieved in 23 patients. In a prospective cohort study[7], nine cirrhotic patients with recent PVST received continuous intravenous infusion of rt-PA at a dose of 0.25 mg/kg/d combined with subcutaneous injection of low molecular weight heparin for a maximum duration of 7 d. Thrombosis recanalization was achieved in eight patients. Besides, a stepwise thrombolysis regimen for PVST should be considered. In a study by Benmassaoud et al[8], 22 non-cirrhotic patients with acute PVST received systemic thrombolysis, of whom eight achieved portal vein recanalization, and the remaining 14 did not have any improvement of thrombosis or abdominal pain and were then treated with transjugular intrahepatic portosystemic shunt (TIPS) or local thrombolysis. Finally, the overall rate of portal vein recanalization was 86.4%. Notably, local thrombolysis and TIPS were employed in the study by Benmassaoud et al[8], but they are more invasive and technically complicated as compared to systemic thrombolysis. In our case, initial anticoagulation was less effective, and thus systemic thrombolysis was given. The symptoms improved significantly after thrombolysis, which avoided further vascular interventional procedures, and even surgery for intestinal infarction and necrosis[9].

Acute PVST is often defined if PVST develops 1-3 wk since the onset of symptoms. Accordingly, our case should be diagnosed with acute PVST. Notably, the timing of antithrombotic therapy for acute PVST is very important. A shorter interval from the diagnosis of PVST to initiation of antithrombotic therapy indicates a higher probability of thrombus recanalization[10]. In our case, the interval was relatively long, which potentially compromised the efficacy of anticoagulation and forced the use of systemic thrombolysis.