Minimally invasive surgery is not just about minimizing trauma but also about achieving a complete radical tumor removal. To achieve this goal, high-definition, high-magnification devices have been developed for use in gastrointestinal cancer surgery, allowing surgeons to perform more accurate resection and avoid unnecessary damage compared with traditional surgery because the tumor and surrounding structures can be better visualized.

For any minimally invasive technique, there is always a learning curve to overcome and sufficient evidence to substantiate its effectiveness; equally important is whether the benefits of these techniques are worth the added cost and time.

Endoscopic resection may be presently thought of as an option for the majority of early gastric malignancy cases and could be recognized as a definitive treatment unless it is thought that there is a significant risk of lymph node metastasis[1-3]. The most risky component of lymph hub metastasis is lymphatic vessels in the vicinity of the tumor. Other risk factors include submucosal intrusion (T1b), poor differentiation, ulceration, and a large tumor[1]. Several studies have reported no significant difference in long-term overall survival or tumor-specific survival between patients with early gastric cancer treated endoscopically and those who underwent conventional surgical resection[4,5].

There are currently two primary endoscopic resection techniques: Endoscopic mucosal resection (EMR) and endoscopic submucosal dissection (ESD). EMR is robust and technically reproducible with a short learning curve, whereas ESD is technically more demanding and therefore has a much longer learning curve. However, ESD normally brings about en bloc specimens, higher extent of complete resections, and fewer nearby recurrences[6,7]. Asian and European guidelines recommend ESD as the endoscopic resection method of choice for early gastric cancer[1,8,9].

Laparoscopy is a landmark advance in the history of minimally invasive surgery, and its use is intended to help minimize surgical trauma, reduce pain, and accelerate recovery of bowel function and general mobility after surgery. All of these factors have the potential to shorten the length of hospital stay and reduce patient suffering.

These studies are inadequate and have limitations, such as geographical differences between the East and the West, but they provide a scientific basis and clinical experience for the promotion of laparoscopic gastric cancer surgery[24-32] (Table 1).

Surgery is the main treatment for colorectal cancer, and minimally invasive surgery is the mainstream developmental direction of surgery in recent years. Laparoscopic colorectal cancer surgery has become the standard technique for the treatment of colon cancer in many countries around the world and has been shown to be safe and feasible in randomized trials and population-based studies due to its short-term efficacy[33-44]. However, more evidence is needed to determine its long-term efficacy, especially for advanced colorectal tumors[45] (Table 2).

The operation for rectal cancer is very complicated and is related to the accessibility of the pelvis and its complex anatomical structure. The surgical treatment of rectal cancer has a greater technical challenge than colon cancer, mainly due to the anatomical limitations of the pelvis and the protection by the pelvic plexus[46]. However, laparoscopic surgery has significant advantages compared to open surgery. Although most studies show no difference in short- and long-term outcomes between laparoscopic and open surgery for rectal cancer, it is still a debated issue. Some studies suggest that the long-term efficacy of laparoscopic rectal cancer resection is yet to be determined and is not superior to that of open surgery[47]. In general, an increasing number of studies have confirmed the efficacy and advantages of laparoscopy in colorectal cancer surgery, and it has been widely used.

Minimally invasive laparoscopic techniques are now rapidly gaining popularity, but conventional laparoscopy provides only a two-dimensional (2D) view. Three-dimensional (3D) laparoscopy overcomes this disadvantage and offers the advantage of a greater field of view[48]. Some studies have shown that 3D laparoscopic surgery provides better depth perception, significantly reduces the operative time and intraoperative blood loss, and shortens the surgeon's learning curve[48-51]. However, there is a lack of prospective evidence on the safety and efficacy of 3D technology in the long term. Despite the controversy, the benefits of 3D laparoscopy are undeniable and it has a promising future.

To overcome the shortcomings of laparoscopic techniques, especially when working in confined spaces such as the pelvis, da Vinci robotic surgery system robots, which are precise, stable, and flexible and can be operated remotely and gradually, are becoming a new option for minimally invasive surgery. The da Vinci robotic surgery system developed by the US Intuitive Surgical Company received US FDA marketing approval in July 2000 and began to be used in clinical applications. In 2002, Weber et al[52] reported the first robotic system-assisted surgery for benign colonic disease, and in the same year, Hashizume et al[53] also reported robotic colorectal surgery for malignant disease. With the development of the technology, it has been widely used in gastrointestinal surgery, hepatobiliary surgery, urology, gynecology, etc.[54]. However, the high cost and a lack of evidence of efficacy are limitations.

Despite the lack of more robust multicenter evidence, robotic surgery has been increasingly used as a minimally invasive means for treating gastric cancer because of the potential surgical advantages that it may have over conventional laparoscopy. However, Kim et al[55] showed that there was no significant difference between the two in terms of surgical blood loss, number of intermediate openings, time to oral feeding, or the length of hospital stay. At the same time, Uyama et al[56] showed that robotic gastric cancer surgery is safe and effective for stage I/II gastric cancer and can reduce the incidence of early postoperative complications compared to laparoscopic surgery. The short-term efficacy of robotic gastric cancer surgery is therefore good, but more evidence is still needed to prove it.

Current evidence suggests that the short-term efficacy of robotic-assisted colorectal cancer surgery is good and it may have potential minimally invasive advantages[57-61]. Robotic surgery for rectal cancer has been promoted as an improved minimally invasive procedure due to the flexibility of the da Vinci robot for operating in confined spaces such as the pelvis. Some prospectively randomized studies have shown that the clinical outcomes of robotic surgical resection of rectal cancer are similar to those of laparoscopic and open surgery[62-69]. There is also literature confirming that robotic rectal cancer surgery is closely associated with better short-term outcomes than laparoscopic surgery, and it has advantages in protecting the pelvic nerves, resulting in fewer short-term postoperative complications and shorter hospital stays[70,71].

Crippa et al[71] analyzed 600 patients. The number of patients undergoing robotic surgery was 317 (52.8%), and the laparoscopic group consisted of 283 (47.2%) patients. Both groups were similar in terms of age, sex, and body mass index (BMI). The overall incidence of short-term complications in patients undergoing robotic surgery was lower than that in the laparoscopic group (37.2% vs 51.2%; P < 0.001). However, larger prospectively randomized trials are needed to support its use. There is no denying that robotic flexibility may be more promising than laparoscopy in rectal cancer surgery.

The aim of minimal invasiveness is to reduce trauma. To avoid the need for an auxiliary abdominal incision, natural orifice specimen extraction surgery (NOSES) is a newly developed method that extracts specimens through natural orifices via the trans-anal or transvaginal route to reduce trauma and to avoid auxiliary abdominal incisions[72]. Trans-anal removal of specimens is mainly used for left-sided colectomies and rectal procedures, and transvaginal removal is used for all colonic procedures, especially right-sided colectomies and large specimens[73,74]. It is seldom used for operations on the stomach, but the study by Jeong et al[73] concluded that in carefully selected elderly women with early gastric cancer, transvaginal specimen collection may be a safe and feasible procedure.

The NOSES technique is currently used mainly in colorectal cancer surgery, especially rectal surgery. Many studies have shown that the NOSES technique is safe and feasible for colorectal cancer; although it may increase the probability of contamination of the surgical area, this does not appear to translate into a higher incidence of infection[75-81]. Colorectal resection with NOSES is more advantageous in terms of postoperative recovery, postoperative pain, esthetics, and complications (Figure 1). However, not every patient is suitable for NOSES. Patients with stage T4 tumors and large tumors should not undergo NOSES. Trans-anal specimens are suitable for both men and women, but the tumor size should be less than 3 cm, whereas transvaginal specimens are suitable for women and the tumor size should be no larger than 5 cm. In addition, the BMI of the patient should be less than 30 kg/m2 for anal specimens and less than 35 kg/m2 for transvaginal specimens[82,83]. Hence, the NOSES procedure indications should be strictly observed. 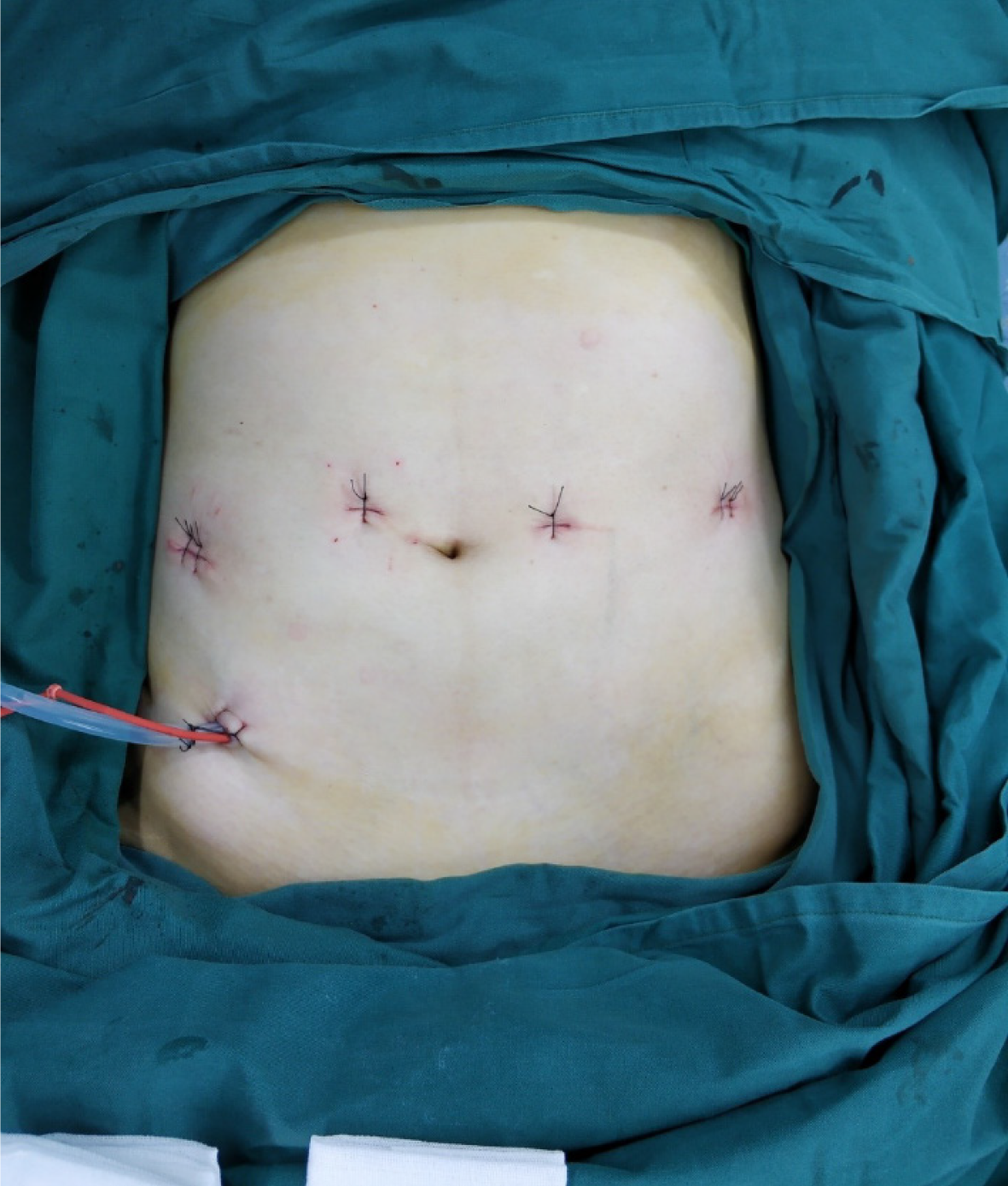 Advances in minimally invasive techniques have opened a new era in gastrointestinal treatment. For gastrointestinal tumors, the most important treatment is surgical resection. However, it is often overlooked that early-stage gastrointestinal cancer can be treated endoscopically with a good result. To obtain the best prognosis and minimal trauma, it is very important to choose an appropriate surgical method.

A 3D laparoscopic imaging system is a further improvement on conventional laparoscopic techniques, and with improved laparoscopic views, it may help to shorten the learning curve of surgeons. Laparoscopic surgery has been recognized in the early treatment of gastrointestinal cancer, and its use in the treatment of most advanced tumors has also been affirmed. We look forward to international multicenter research evidence.

To improve the inadequacy of laparoscopic techniques, especially when operating in a narrow space, such as the pelvis and at the superior margin of the pancreas, surgeons started using robotic surgery systems. Among them, the da Vinci robot surgery system is used most often, and its technology is relatively mature, which offers the advantages of anti-shaking, three-dimensional vision, and operational flexibility, taking minimally invasive surgery to new levels of precision[91,92]. At present, the research on da Vinci robots is mainly retrospective. From the results, some short-term curative effects are better than those of laparoscopy, and the long-term curative effect is equivalent. However, these results need further confirmation in randomized clinical trial results. Additionally, one of the greatest drawbacks of the da Vinci robotic surgical system is its cost. The da Vinci surgical system is the only surgical robot available on the market today, and it has a high upfront cost. At the same time, surgeons need to go through a long learning curve to use the robotic system, meaning that the da Vinci system costs considerable time and money upfront, which is a major reason for its need for further development. Hence, before large-scale randomized clinical trial research is confirmed, we recommend that gastrointestinal surgery with rich experience in laparoscopy be carried out.

The future of surgical robots will move toward miniaturization and intelligence, and with the maturity of 5G technology, artificial intelligence technology and 5G technology have the potential to be combined with robotic surgical systems to help surgeons operate remotely, improve medical conditions, reduce healthcare costs, and benefit more patients.