The effect of low ligation (LL) vs high ligation (HL) of the inferior mesenteric artery (IMA) on functional outcomes during sigmoid colon and rectal cancer surgery, including urinary, sexual, and bowel function, is still controversial.

To assess the effect of LL of the IMA on genitourinary function and defecation after colorectal cancer (CRC) surgery.

Since LL may result in better bowel function and a reduced rate of anastomotic stenosis following CRC surgeries, we suggest that LL be preferred over HL.

Core Tip: It remains unclear whether the benefits of low ligation of the inferior mesenteric artery (IMA) during sigmoid colon and rectal cancer surgeries extend to improved genitourinary and defecatory function. We conducted this meta-analysis to compare low ligation and high ligation of the IMA in terms of functional outcomes, as well as other surgical and long-term survival outcomes.

Colorectal cancer (CRC) ranks third in global cancer incidence, accounting for 10.0% of the total number of cancer cases, and ranks second in mortality[1]. Two techniques, which differ mainly in the level of inferior mesenteric artery (IMA) ligation, are used during curative surgery for cancer of the sigmoid colon and rectum. Which of high ligation (HL), which does not preserve the left colic artery, or low ligation (LL), which does preserve the left colic artery, is the better technique has been controversial since 1908[2]. Compared with LL, HL may allow a greater total number of lymph nodes to be harvested, facilitating more accurate assessment of tumor stage, and guiding adjuvant treatment. HL may be easier to achieve surgically and has been advocated by Girard et al[3]. Because HL will increase urogenital and defecation disorders, others have recently suggested that LL be preferred[4,5]. Some studies, however, showed no significance between LL and HL in terms of surgical or oncological outcomes[6,7].

Because of the ongoing controversy, previous reviews have explored the relationship between the two different approaches to IMA ligation and patient outcomes. Harjinder et al[8] found no difference between the two techniques in terms of rate of anastomotic leakage, total number of lymph nodes harvested, or survival rates. Other meta-analyses[9,10], however, found that LL of the IMA is associated with a lower risk of anastomotic leakage. At present, when completing sigmoid colon and rectal cancer surgery, it remains unclear whether the benefits of LL extend to improved genitourinary and defecatory function.

To address this, we carried out this meta-analysis to systemically compare LL and HL of the IMA in terms of functional outcomes, including urinary, sexual, and bowel function, as well as other surgical and survival outcomes.

This meta-analysis was conducted according to the guidelines for Preferred Reporting Items of Systematic Reviews and Meta-Analyses (PRISMA)[11]. The search terms “ligation” and “colorectal surgery” were used to retrieve all relevant articles from the Cochrane library, PubMed, EMBASE, and Web of Science (search last updated in December, 2020). References cited by articles identified in the initial search were used to identify additional relevant articles.

The following criteria were used for inclusion: (1) Studies having at least one main result; (2) Randomized controlled trials (RCTs) or non-randomized studies in patients with sigmoid colon and rectal cancer; and (3) Studies comparing high and low ligation in radical resection, regardless of surgical approach. Where several reports described the same clinical study, the publication with the most complete data set was included in the meta-analysis. Articles in any language were included.

The exclusion criteria were as follows: (1) Studies having no control group; (2) Full text unavailable; and (3) Review articles, case reports, letters, or meta-analyses.

Two authors independently checked and evaluated the titles and/or abstracts of the articles and excluded any that were obviously irrelevant. The suitability of the remaining articles for inclusion in the analysis was assessed by inspection of the full article. Relevant details on research design, baseline characteristics, and outcomes were then collected. Differences in opinion between the two authors were resolved through discussion. The following data were retrieved from each article: Year of publication, first author’s name, country where the study was conducted, and the number of patients, together with age and gender. If available, supplementary information was obtained for each article included in the study.

The Newcastle-Ottawa Scale[12], based on comparability between groups, quality of patient selection, patient results, and determination of exposure, was used to evaluate the quality of non-randomized studies. The Cochrane Collaborative Bias Risk Tool was used to evaluate the quality of RCTs. Research areas covered allocation concealment, selective reporting of results, sequence generation, incomplete results, blinding, and other sources of bias. The bias risk of each study was sorted as high, ambiguous, or low. Differences were settled through consensus discussions.

Statistical analyses were performed using Review Manager 5.3 software (The Cochrane Collaboration; Copenhagen, Denmark). Continuous outcomes are expressed as weighted mean differences (WMDs), with 95% confidence intervals (CIs). Dichotomous outcomes are expressed as odds ratios (ORs), with 95%CIs. Heterogeneity between studies was evaluated using the χ2 test (Cochran Q test) and I2 statistics. The random effects model was used for meta-analysis where the P value was less than 0.10 or I2 was greater than 50%; otherwise the fixed effects model was used.

Our initial search identified 458 studies. After removal of duplicates and assessment of eligibility for inclusion, 14 clinical trials, which included an LL treatment group and an HL treatment group, were included in the final analysis (Figure 1). These studies involved a total of 4750 patients, with 1984 patients in the LL group and 2766 patients in the HL group. The baseline characteristics of the 14 eligible studies[4,5,7,13-23] are shown in Table 1. Quality assessments of the included studies are shown in Table 2 and Figure 2, and all endpoints are listed in Table 3. 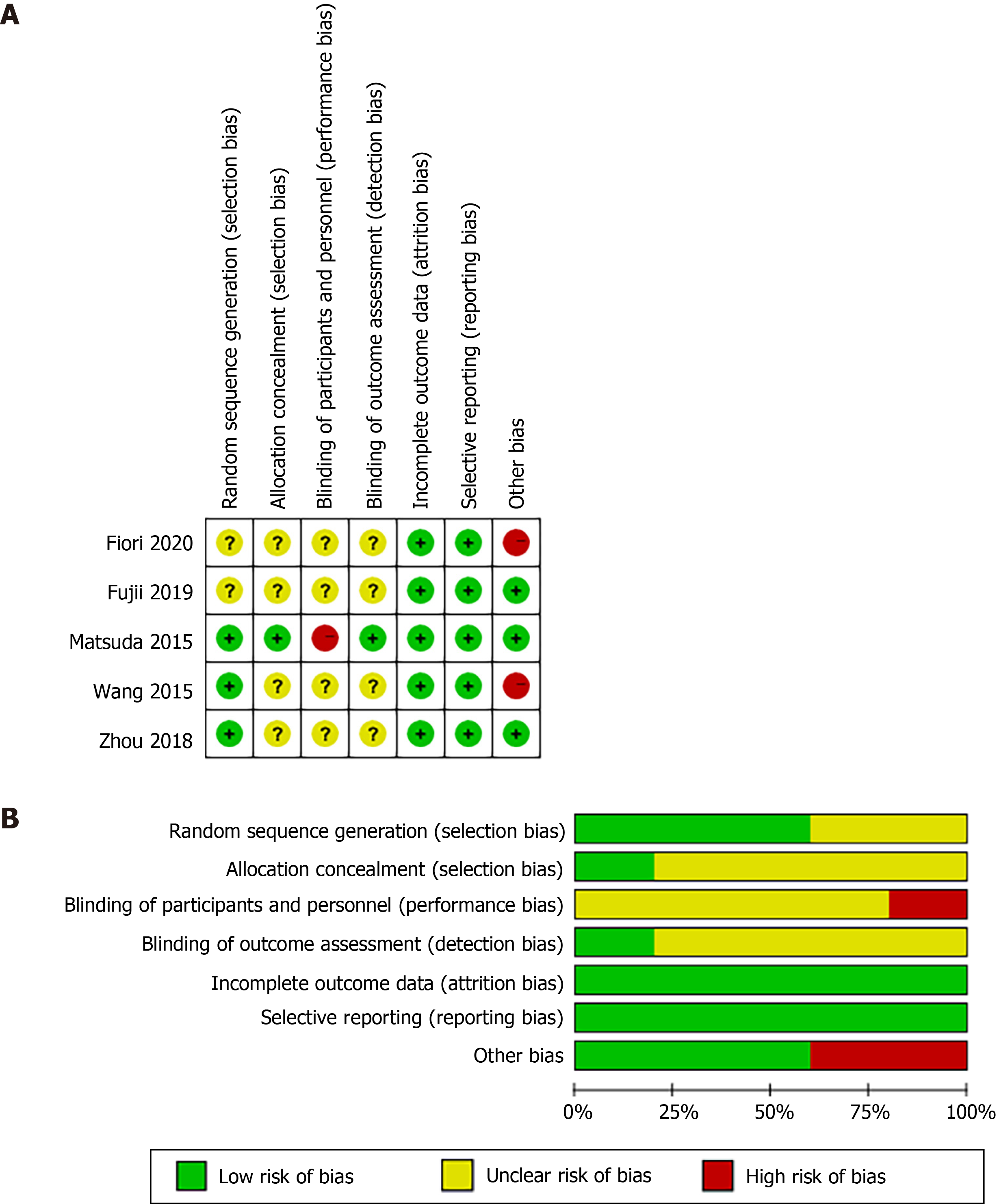 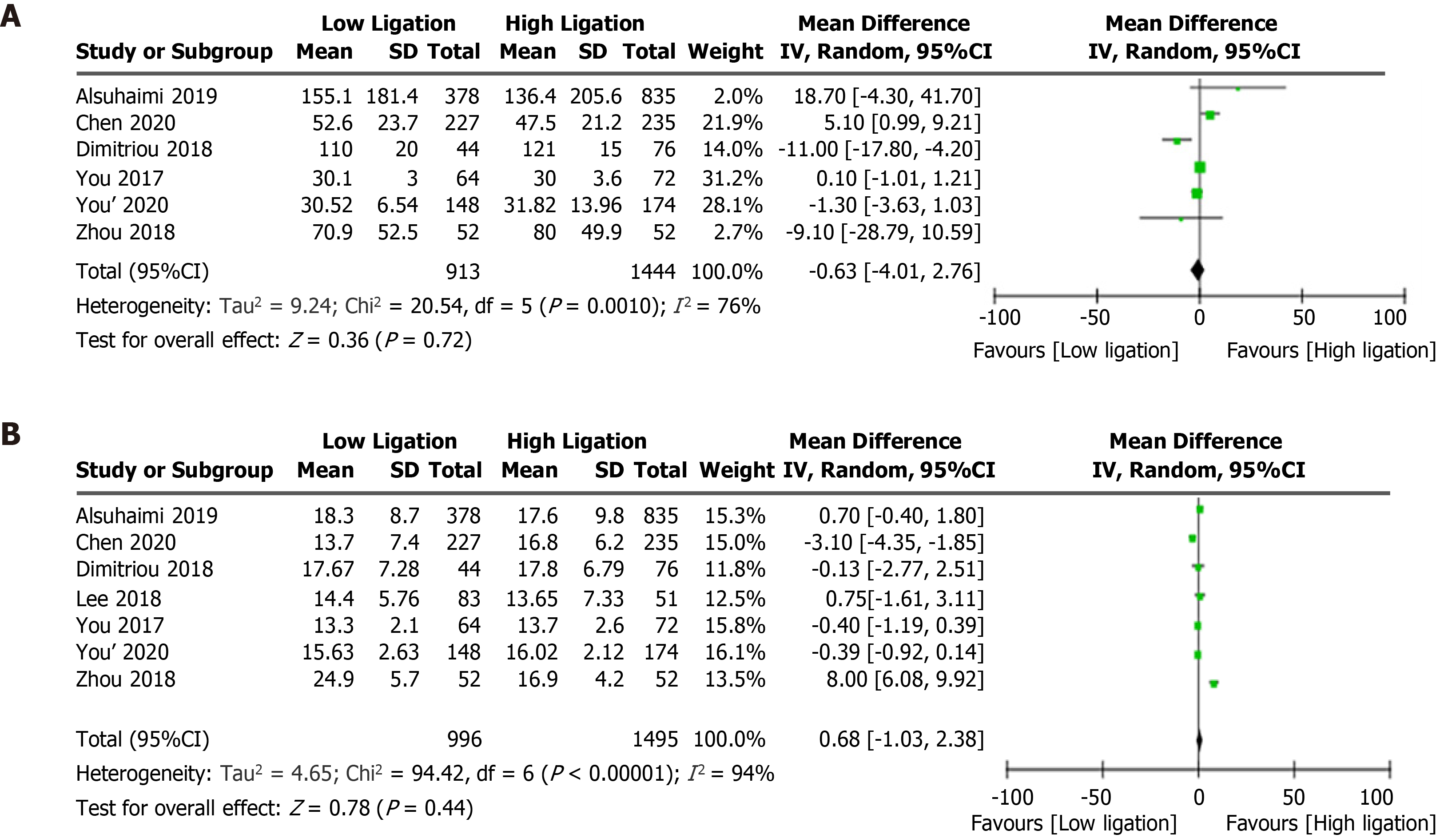 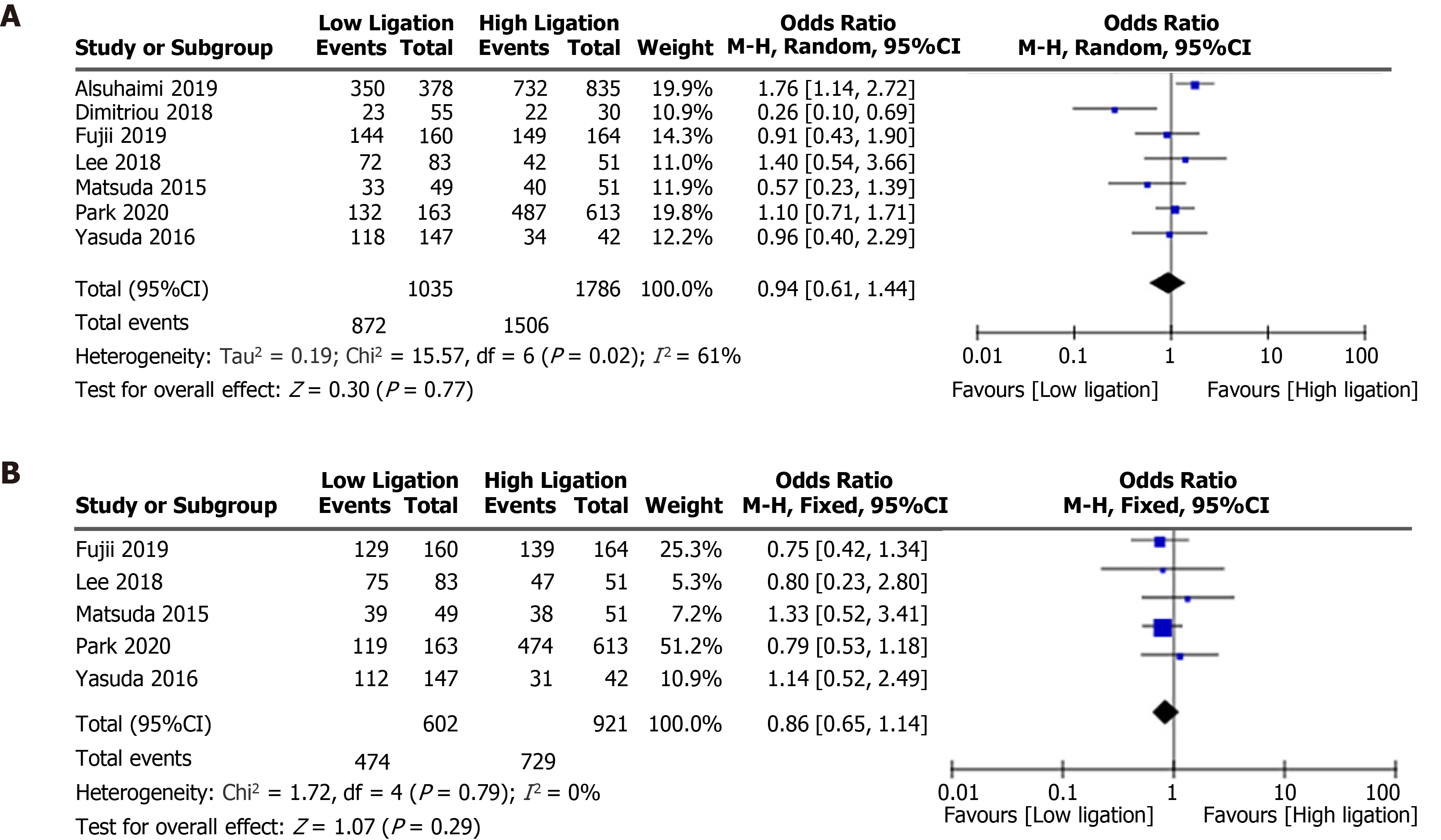 Radical resection is the most efficient way to surgically treat sigmoid colon and rectal cancer. However, the best ligation site of the IMA has been controversial for more than 100 years. The current controversy mainly involves the influence on lymph node dissection, anastomotic blood supply, postoperative autonomic function, and prognosis. Some safety and oncological outcomes following LL and HL have been investigated in previous reviews[8-10,24,25], all of which reported that LL decreased the incidence of anastomotic leakage, except for one meta-analysis that included only RCTs. A meta-analysis carried out by Hajibandeh et al[8] demonstrated that there was no significant difference in anastomotic leakage rate between the two ligation positions of the IMA. These earlier reviews also found no difference in terms of the number of lymph nodes harvested or the survival rate. Our meta-analysis, on the other hand, mainly evaluated functional outcomes and found that LL was associated with a lower risk of anastomotic stenosis, which was also related to anastomotic tension and anastomotic blood supply.

Impaired bowel function is also a common complication after CRC surgery. Factors affecting bowel function are complex and include rectal compliance, anal sphincter function, and pelvic floor muscle contraction. The regulation of defecatory function is closely controlled by the sympathetic and parasympathetic nerves from the superior and inferior hypogastric plexus[26]. Although previous trials acquired the data at different months after surgery, acute peripheral nerve injury may take up to 6 mo to heal[27]. We therefore used Wexner’s incontinence score[28], nocturnal bowel movement, and the number of patients using antidiarrheals and laxatives 1 year after surgery to compare bowel function following the two ligation techniques.

Motility of the neorectum is closely associated with defecatory function and it has been suggested that long denervation of the neorectum following HL leads to impaired bowel function[29]. Less propagated contraction and more spastic micro-contraction were observed in patients with long denervation. Although other indicators related to bowel function were difficult to analyze because of the limitation of data extraction, we found that the LL may result in better bowel control.

From an oncological perspective, some surgeons believe that HL during radical resection of sigmoid CRC can allow removal of more lymph nodes and improve the prognosis of patients. Others, however, believe that metastasis of apical lymph nodes is rare, and that the survival rate following LL is not inferior to that following HL. There was little difference in total recurrence rate, number of lymph nodes harvested, 5-year overall survival, or 5-year disease-free survival between the two levels of ligation of the IMA in our meta-analysis.

Since autonomic function could greatly affect the quality of life of patients, we compared the outcomes of two levels of ligations of the IMA on postoperative urinary, sexual, and defecatory function. This meta-analysis can provide surgeons with suggestions for the best IMA ligation technique during radical resection of sigmoid CRC. Our meta-analysis has some limitations and there are several confounding factors, such as neoadjuvant therapy, adjuvant therapy, tumor stage, operative approach, surgical technology, and preventive stoma. Functional outcomes were not completely clear because some studies did not evaluate the preoperative genitourinary and bowel function of the patients and functional outcomes were not determined at a consistent time after surgery. Both of these factors may affect the judging of functional outcomes and we hope that future studies will address these issues.

LL may result in better bowel function and reduce the rate of anastomotic stenosis. The risk of urinary dysfunction and anastomotic leakage, however, seems to be equivalent between the two IMA ligation techniques. Since LL is less invasive and does not increase operative time, we recommend LL of the IMA in sigmoid colon and rectal cancer surgery. Future studies are needed to confirm our conclusions.

Whether the benefits of low ligation (LL) of the inferior mesenteric artery (IMA) during colorectal cancer (CRC) surgeries extend to improved genitourinary and defecatory function is still controversial.

Previous studies have demonstrated that LL was associated with a lower risk of postoperative genitourinary and defecatory dysfunction in patients with CRC. One randomized study, however, found that LL was not superior to high ligation (HL) in preserving urinary function. Therefore, we carried out a meta-analysis to systemically compare functional outcomes of patients with CRC between LL and HL of the IMA.

To evaluate the effect of LL of the IMA on genitourinary function and defecation for patients after CRC surgeries.

The meta-analysis methods were adopted to realize the objectives. And statistical analyses were performed using Review Manager 5.3 software.

Since LL may result in better bowel function and a reduced rate of anastomotic stenosis following CRC surgeries, we suggest that LL be preferred over HL.

Some limitations in this meta-analysis should be addressed carefully. First, since both randomized controlled trials and non-randomized studies were included, the randomization in the original research was limited. Second, several studies did not evaluate the preoperative genitourinary and bowel function of the patients and functional outcomes were not determined at a consistent time after surgery. In addition, there were differences in the neoadjuvant therapy, adjuvant therapy, surgical approach, and preventive stoma in this analysis. All of these factors may affect the results. Future studies are needed to address these issues.

We thank all the previous study authors whose work is included in this meta-analysis.