Liver cancer is a malignant tumor with a high incidence. At present, the most effective treatment is laparoscopic hepatectomy (LH). Indocyanine green fluorescence imaging (ICG-FI) has become an important tool in LH, and the most common fluorescent types of tumors are total fluorescence, partial fluorescence, and rim fluorescence.

We presented four cases of LH guided by ICG-FI in which we also observed the fourth special fluorescent type. When the tumor or intrahepatic stone compresses the adjacent bile duct to cause local cholestasis, the liver segment or subsegment with obstructed bile drainage will show strong fluorescence. Complete removal of the lesion together with the fluorescent liver parenchyma may help reduce the risk of tumor or stone recurrence.

This type of partial fluorescence can indicate local biliary compression, and the resection method is related to bile drainage, which may be called functional anatomical hepatectomy and ensures radical resection of the lesion.

With the development of near-infrared imaging technology in recent years, indocyanine green fluorescence imaging (ICG-FI) systems have become an important auxiliary tool in laparoscopic hepatobiliary surgery, which can help guide surgery in real time[1]. It is most commonly used in tumor location, showing total fluorescence, partial fluorescence, or rim fluorescence, according to the malignant tumor[2]. In our clinical practice, we observed another unusual and practical fluorescent phenomenon. When the liver tumor invades or compresses adjacent bile ducts, bile excretion in the corresponding liver segment becomes obstructed, and ICG remains in the cholestatic area, which contributes to the visualization of the cholestatic liver parenchyma during surgery. We can completely remove the tumor together with the affected bile drainage area, which may help reduce the risk of tumor relapse[3]. Here, we report four rare cases of fluorescence with localized cholestasis, summarize and analyze the staining characteristics and significance of the fluorescent phenomenon, and propose functional anatomical hepatectomy. In these four cases, ICG was injected intravenously at a dose of 5 mg the day before surgery, and ICG-FI was obtained using the PINPOINT imaging system (Novadaq Technologies Inc., Ontario, Canada).

Case 1: The patient was a 60-year-old man with a liver mass detected during a routine checkup.

Case 2: The patient was a 73-year-old man diagnosed with colon cancer with liver metastases in September 2019.

Case 3: The patient was an 83-year-old man with a liver mass detected during a routine checkup.

Case 4: The patient was a 59-year-old woman who complained of frequent right upper quadrant abdominal pain for approximately 1 wk.

Case 1: The patient underwent magnetic resonance imaging (MRI) of the upper abdomen, which revealed a tumor approximately 35 mm in diameter located in liver segment V/VIII (Figure 1A and B). Preoperative 3-dimensional reconstruction revealed that the tumor invaded the right anterior branch of the portal vein (Figure 1C and D). With a presumptive diagnosis of hepatocellular carcinoma, he underwent laparoscopic hepatectomy (LH). We observed partial fluorescence of segment V during the operation (Figure 1E), and the intraoperative ultrasound examination indicated that the right anterior branch of the portal vein was compressed by the tumor (Figure 1F). From the cut surface of the postoperative specimen shown in Figure 1G and H, we confirmed that the Glissonian pedicle was invaded by the tumor, which caused fluorescent staining of segment V. 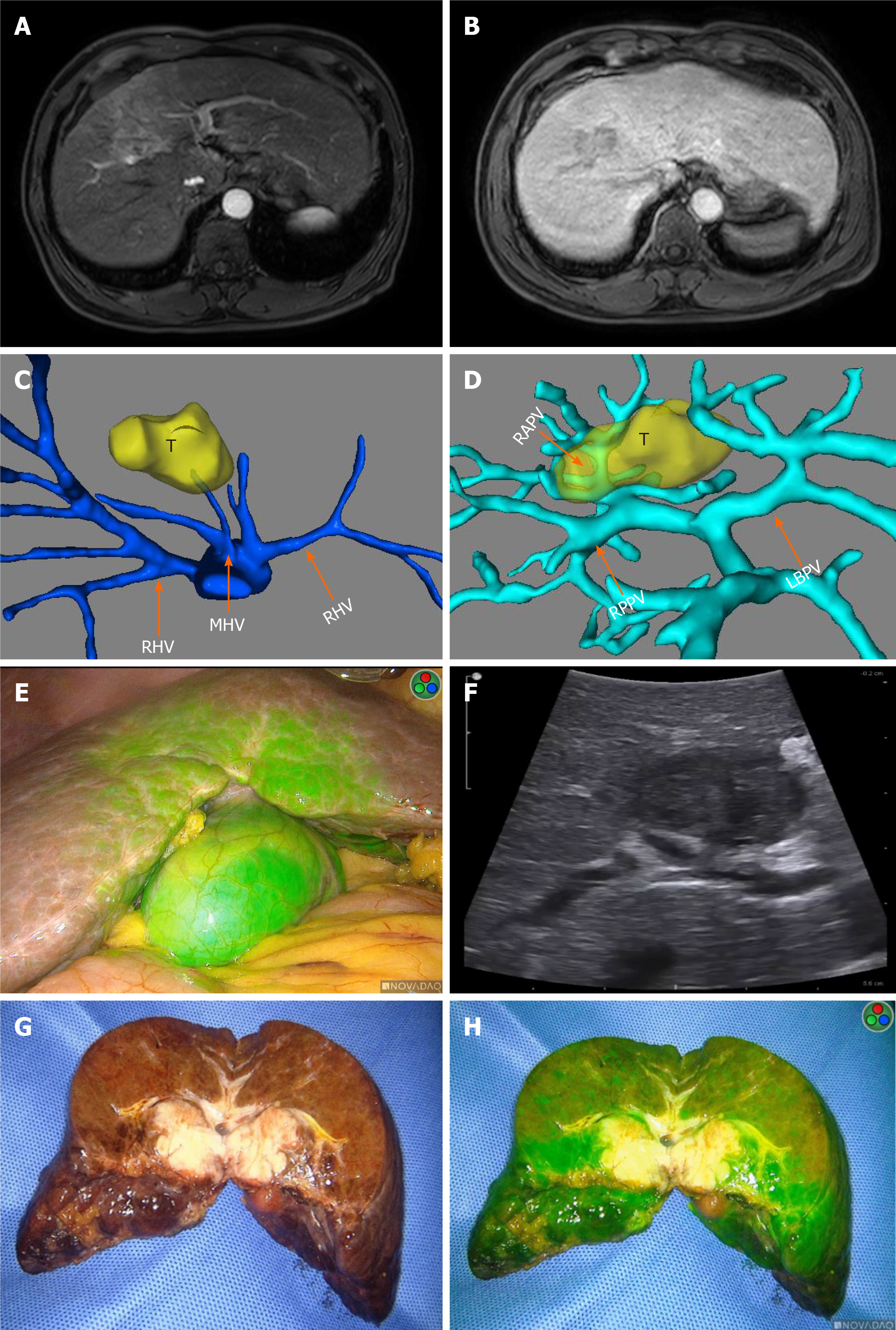 Case 2: Abdominal contrast-enhanced computed tomography (CT) in February 2020 showed that all three liver metastases were smaller after chemotherapy, and he was admitted to the hospital for partial hepatectomy. During the surgery, the tumors and their surrounding fluorescent rings were clearly observed only in segments V and VIII (Figure 2A and B). In the left lateral lobe of the liver, a large area showed strong fluorescence (Figure 2C and D), which was caused by the segment II tumor invading and oppressing the drainage of the bile duct of the corresponding liver segment. For this reason, we excided the tumors in segments V and VIII and then conducted left lateral lobe resection to remove the liver parenchyma with complete bile drainage obstruction. 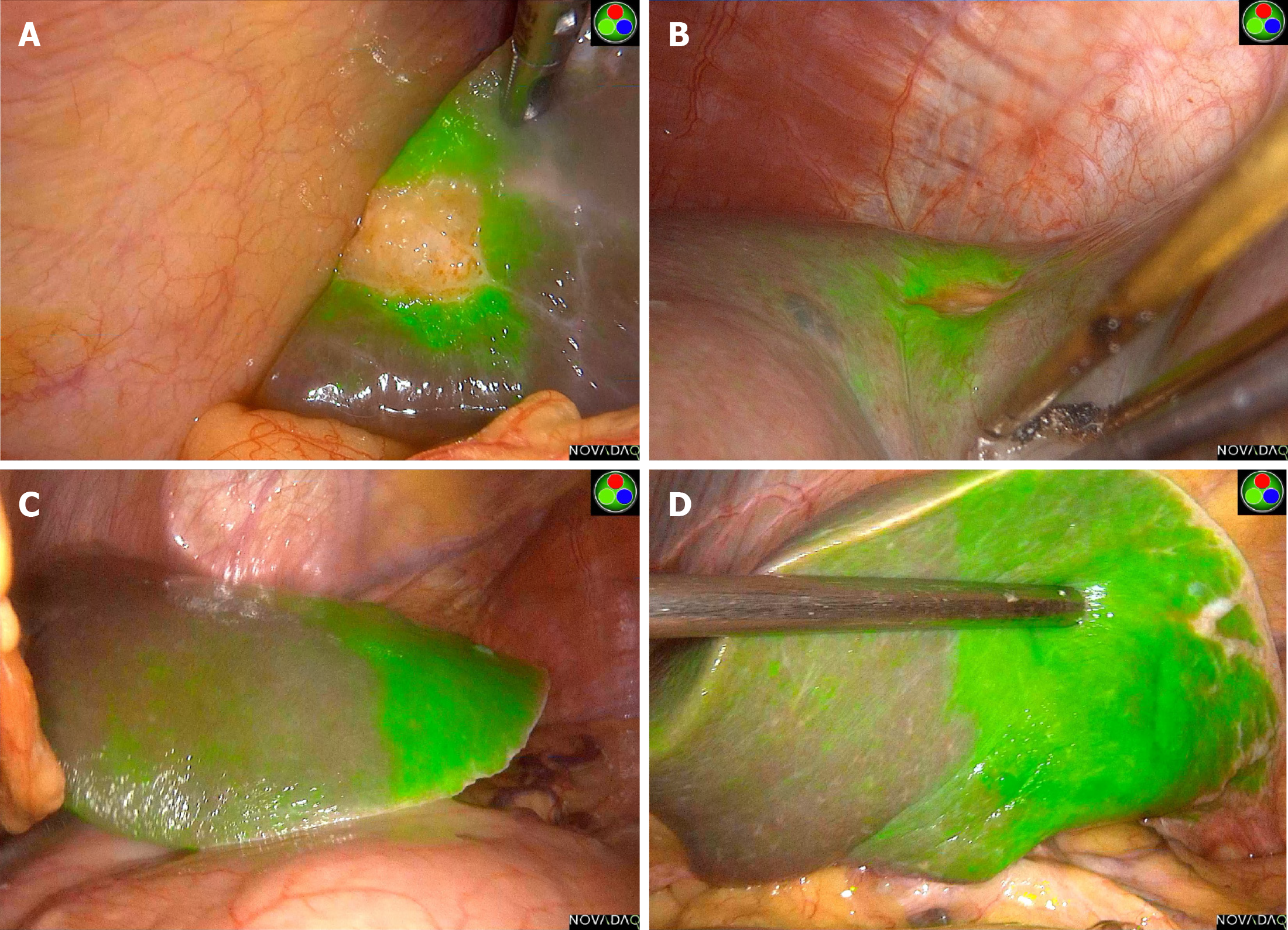 Case 3: The patient underwent abdominal MRI examination and was diagnosed with a hepatocellular carcinoma approximately 20 mm in diameter located at segment VI (Figure 3A and B). Intraoperative ultrasound examination of segment VI showed a tumor 2 cm × 3 cm in size. Through fluorescence laparoscopy, a fluorescent area of approximately 5 cm × 6 cm could be observed in part of segment VI, which was much larger than the tumor itself (Figure 3C). Under the guidance of intraoperative ultrasound, we dissected and clipped the segment VI Glissonian pedicle. A few minutes later, an ischemic line appeared on the surface of the liver, almost coinciding with the fluorescence boundary (Figure 3D), which again suggested that the fluorescent staining part was due to tumor compression of the segment VI Glissonian pedicle. According to the fluorescence boundary and ischemic line, we completely removed the tumor and the liver segment with bile excretion obstruction caused by tumor compression. From the postoperative specimen shown in Figure 3E and F, we could see the stained segment and the Glissonian pedicle oppressed by the tumor. 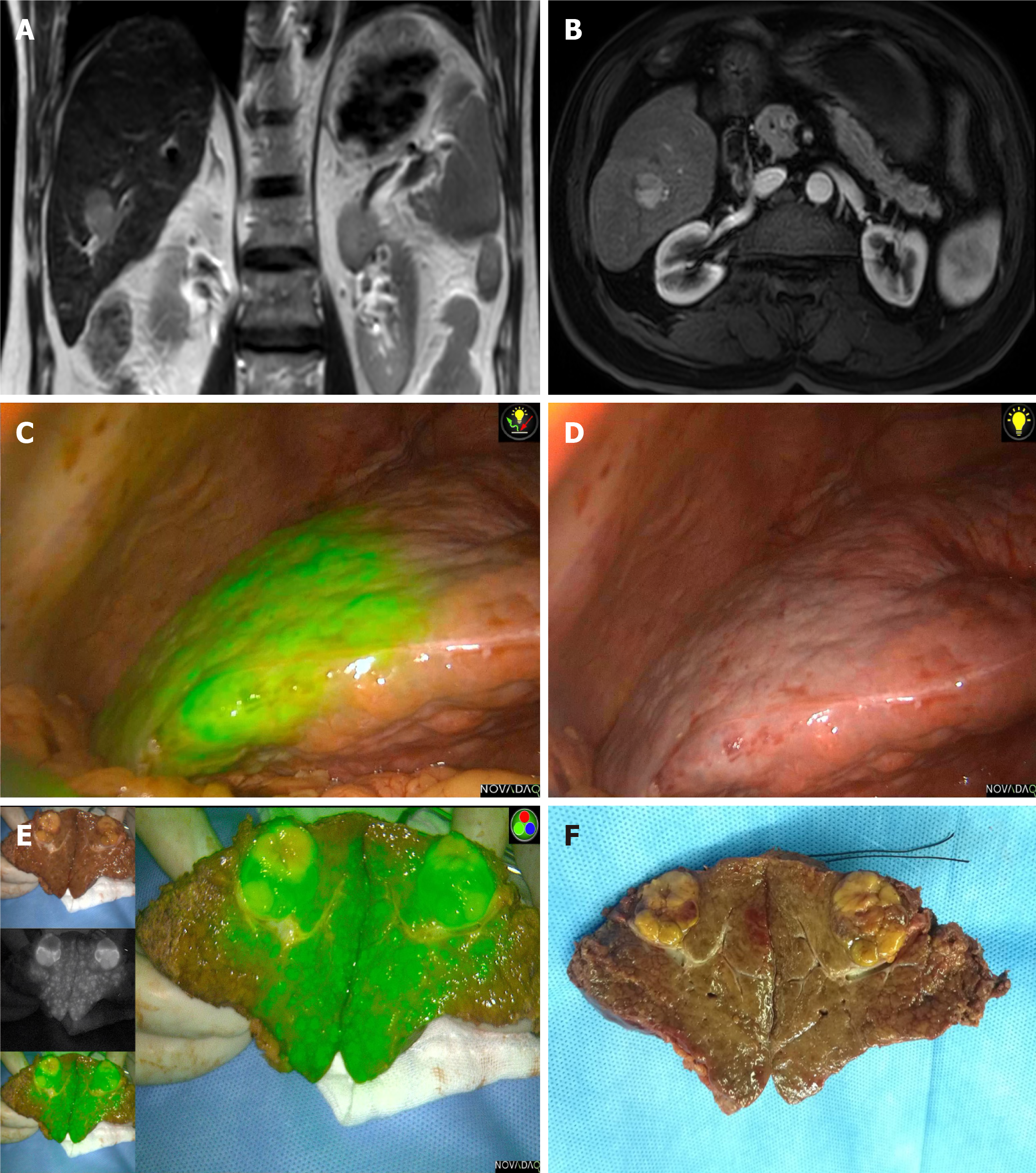 Figure 3 Imaging examinations of Case 3. A and B: Preoperative magnetic resonance imaging examination indicated a hepatocellular carcinoma approximately 20 mm in diameter located at segment VI; C: Fluorescent staining of segment VI; D: The ischemic line on the liver surface after clipping the segment VI pedicle; E and F: Postoperative specimen confirmed the Glissonian pedicle oppressed by the tumor and the stained segment.

Case 4: The CT scan of the abdomen indicated multiple stones in the bile duct of the right lobe of the liver (Figure 4A). During the surgery, we observed partial fluorescence ranging from approximately 5 cm × 4 cm in liver segments VI and VII (Figure 4B), with regional atrophy of the liver parenchyma, so we completely resected the atrophic liver parenchyma according to the fluorescence boundary and removed the stones. 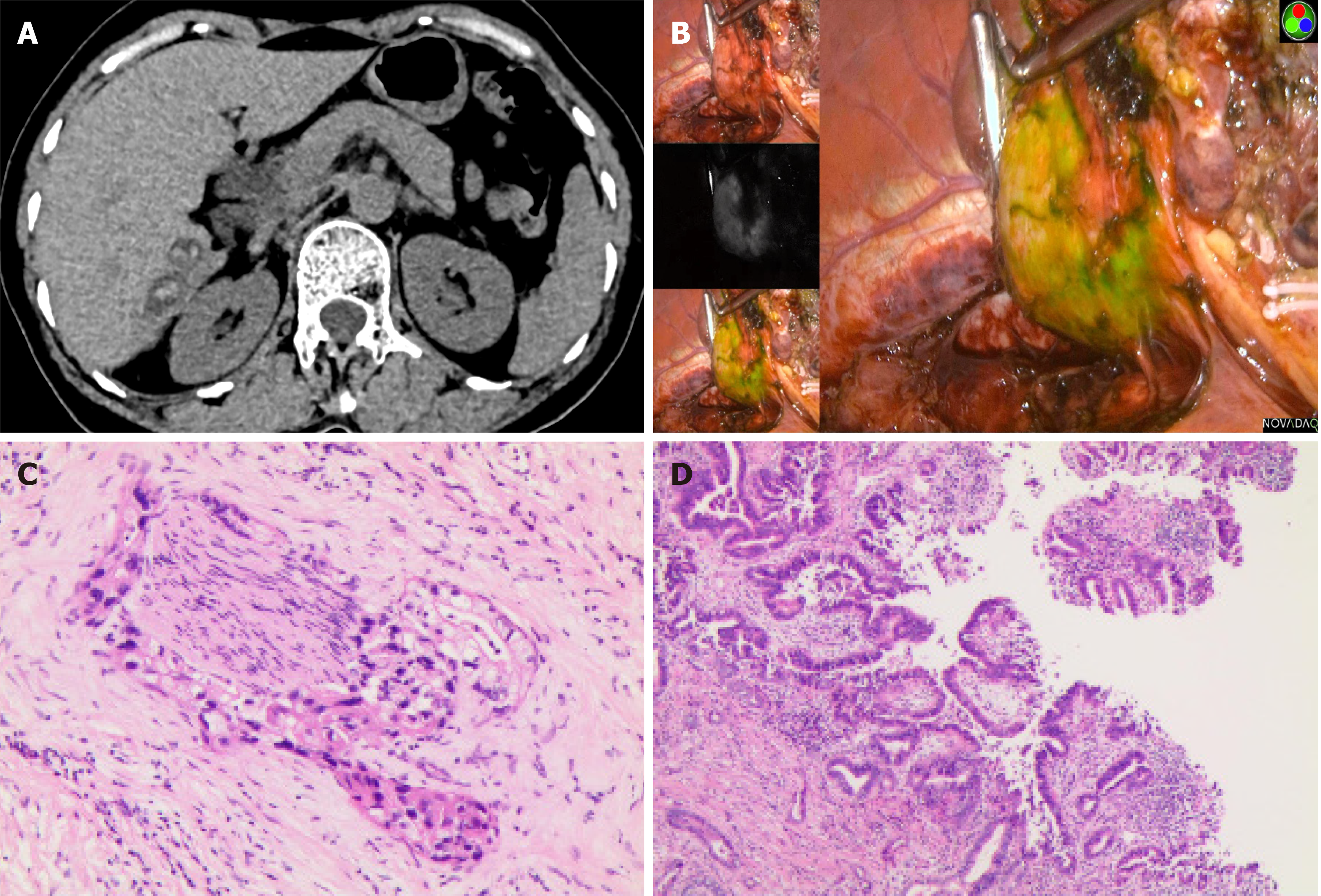 All four patients underwent laparoscopic partial hepatectomy guided by ICG-FI as described above.

The four patients are well at present, and no tumor recurrence occurred during the follow-up period of 12.5 mo (7-24 mo).

Hepatobiliary diseases are usually associated with inflammation or tumor infiltration of adjacent tissues, so patients whose local anatomical structures are difficult to evaluate are often encountered, which makes it difficult to identify the surgical boundary of the liver parenchyma[4]. ICG-FI technology can play a more helpful role in real-time navigation with this kind of patient. When the lesion infiltrates or compresses the adjacent bile duct, bile excretion in the corresponding area is blocked, causing ICG to be retained in the cholestatic area of the liver. Thus, the liver parenchyma of the cholestatic area can be visualized during the operation, which can help ensure complete removal of the lesion and the affected bile drainage area.

In our medical center, more than 200 patients diagnosed with liver tumors have undergone LH guided by ICG-FI, and only four (approximately 2%) of them manifested this unique fluorescence phenomenon. In these four cases, the ICG-FI system delineated segments or subsegments of the liver with bile drainage obstruction by visualizing the cholestatic area with ICG fluorescence. It could clearly show the cholestatic area on the surface of the liver caused by tumor invasion or stone compression of the local bile duct, which could help determine the range of surgical resection. Although some patients may only manifest mild fluorescence on the liver surface, it provides sufficient information for surgeons to estimate the extent of biliary obstruction to remove the area affected by the tumor or stone as completely as possible with minimal loss of liver parenchyma.

ICG-FI is a practical and promising technique with great advantages in tumor staining. It can also clearly show cholestatic liver segments or subsegments caused by malignant infiltration, tumor compression, stone obstruction, local inflammation, or tumor thrombi in the bile duct, and it can provide real-time navigation for functional anatomical hepatectomy, which may help reduce the risk of tumor recurrence.