We conducted a retrospective study of 72 patients with low rectal cancer who underwent sphincter-saving procedures with either straight or colonic pouch anastomoses. Functional evaluations were completed preoperatively and at 1, 6, and 12 mo postoperatively. We also compared perioperative and oncological outcomes between two groups that had undergone low or ultralow anterior rectal resection.

Core Tip: With the increased use of sphincter-saving procedures, improvements of the quality of life of patients undergoing low or ultralow anterior rectal resection have become increasingly important. Our study demonstrates that the use of colonic pouch anastomosis gives a superior functional result when compared with traditional straight anastomosis for low rectal cancer. Therefore, colonic pouch anastomosis is a favorable option for patients undergoing low anterior or ultralow anterior resection.

Low rectal cancer is loosely defined as tumors occurring in the distal rectum within 6 cm of the anal ring[1]. Abdominoperineal resection was historically the procedure of choice for such cases. However, with advancements in laparoscopic technology and the wide application of linear staplers[2,3], sphincter-saving procedures are increasingly performed leading to a marked decline in abdominoperineal resection for low rectal cancer in clinical practice[4]. However, sphincter-saving procedures have led to the emergence of a unique clinical disorder termed anterior rectal resection syndrome (ARS), which is multidimensional bowel dysfunction syndrome, including fecal incontinence, urgency, frequent bowel movements, and clustering[5]. Ninety percent of patients have varying degrees of postoperative ARS, and up to 41% patients have major ARS[6,7]. However, ARS is primarily a clinical diagnosis based on symptoms rather than objective scoring systems, which has led to a substantial underestimation of ARS prevalence in clinical practice[8].

We conducted a retrospective study at the Department of Gastrointestinal Surgery, First Affiliated Hospital of Chongqing Medical University, Chongqing, China. Our hospital, whose operation volume for rectal cancer is up to 500 cases every year, is a high-volume center for such surgery. The perioperative and follow-up data of patients with low rectal cancer who underwent surgery at our department from January 2017 to January 2020 were analyzed.

Perioperative broad-spectrum antibiotic prophylaxis (cefuroxime) was begun during the induction of anesthesia and continued for at least 24 h after surgery. Revisions of the antibiotic regimen were determined by the surgeon in response to the patient’s condition. All patients were allowed to drink water on the first postoperative day, soup on the second day, and to consume nutritional powder on the third day. These milestones were adjusted according to the recovery of bowel function. We often encouraged all patients to get out of bed on the first postoperative to facilitate bowel function.

All patients were evaluated at 3-6 mo in the outpatient department. Routine blood tests (including tumor markers) were done every 3 mo, a computed tomography scan was completed every 6 mo, and a colonoscopy was performed annually. Patients having either stage II disease with high-risk factors or stage III disease received 6-8 cycles of chemotherapy (oxaliplatin plus capecitabine)[18]. If tumor margins were positive on histopathologic examination, we usually suggested postoperative radiotherapy. However, all included patients did not receive postoperative radiotherapy because Ro resection was performed for those patients. Ileostomy was closed 2 mo postoperatively and after confirmation of the integrity of the anastomosis. Functional outcomes were assessed by interviewing patients during the office visits using a standardized low anterior resection syndrome (LARS) questionnaire at 1, 6, and 12 mo after ileostomy closure[19].

Data of 136 patients with low rectal cancer treated during the study period were retrieved. Among these, 23 patients received neoadjuvant chemoradiation, 15 patients did not receive surgery due to distant metastasis, and 26 patients did not complete postoperative follow-up. Consequently, 72 patients satisfying the selection criteria were included in this study (Figure 2). 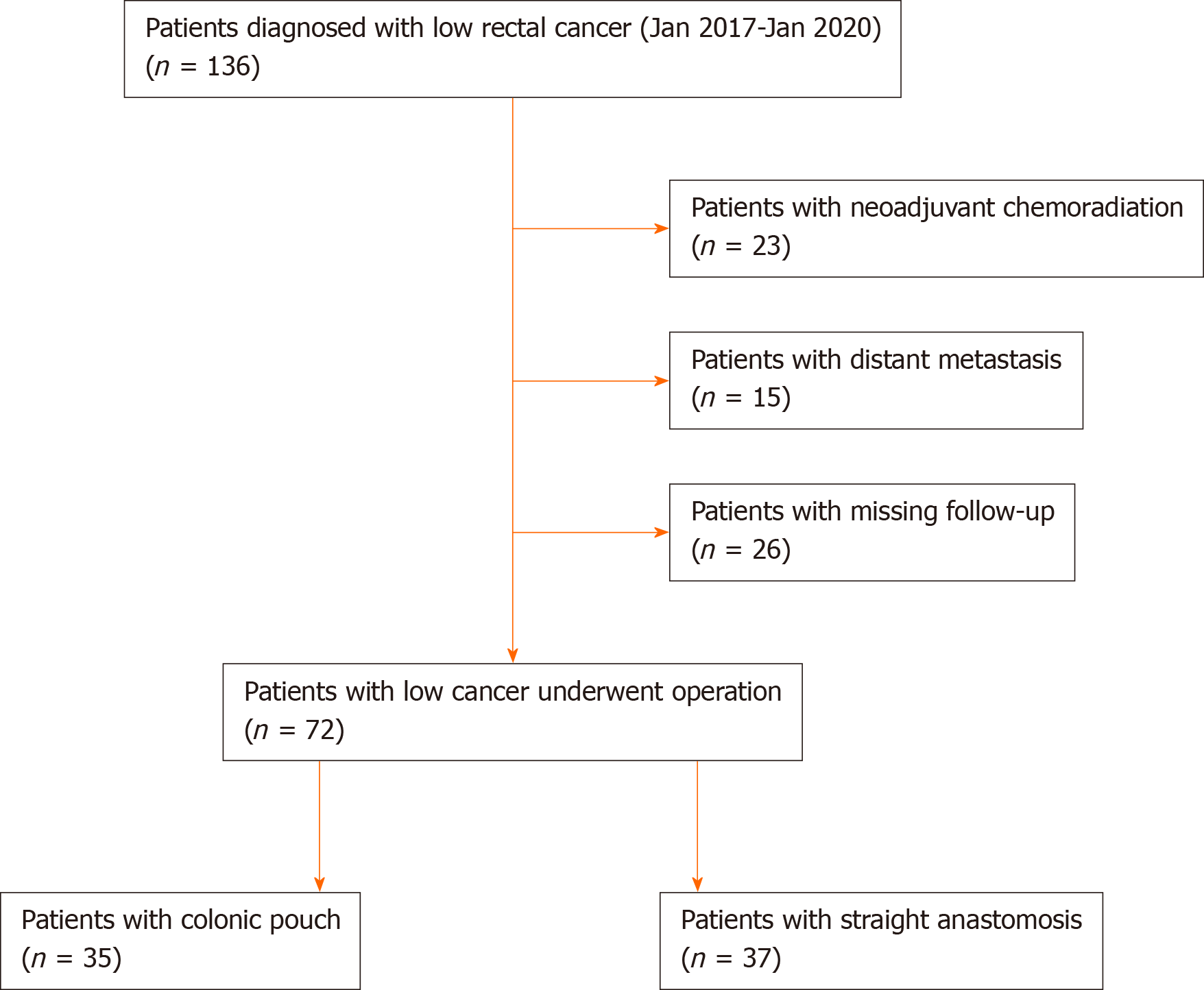 Colonic pouches were constructed in 35 patients. Different colonic pouch types included J-pouch (n = 27), H-pouch (n = 2), and side-to-end anastomosis (n = 6). The H-pouch was used in the setting of a narrow pelvis. In six patients who underwent total laparoscopic radical resection of rectal cancer, we performed side-to-end anastomosis because it was difficult to create the J-pouch with the total laparoscopic technique (Table 1).

Comparisons of various parameters between patients with colonic pouch and straight anastomoses are shown in Table 2. There were no significant differences between the two groups in blood loss, operation time, postoperative complications, and duration of hospitalization.

Comparison of the postoperative bowel functions 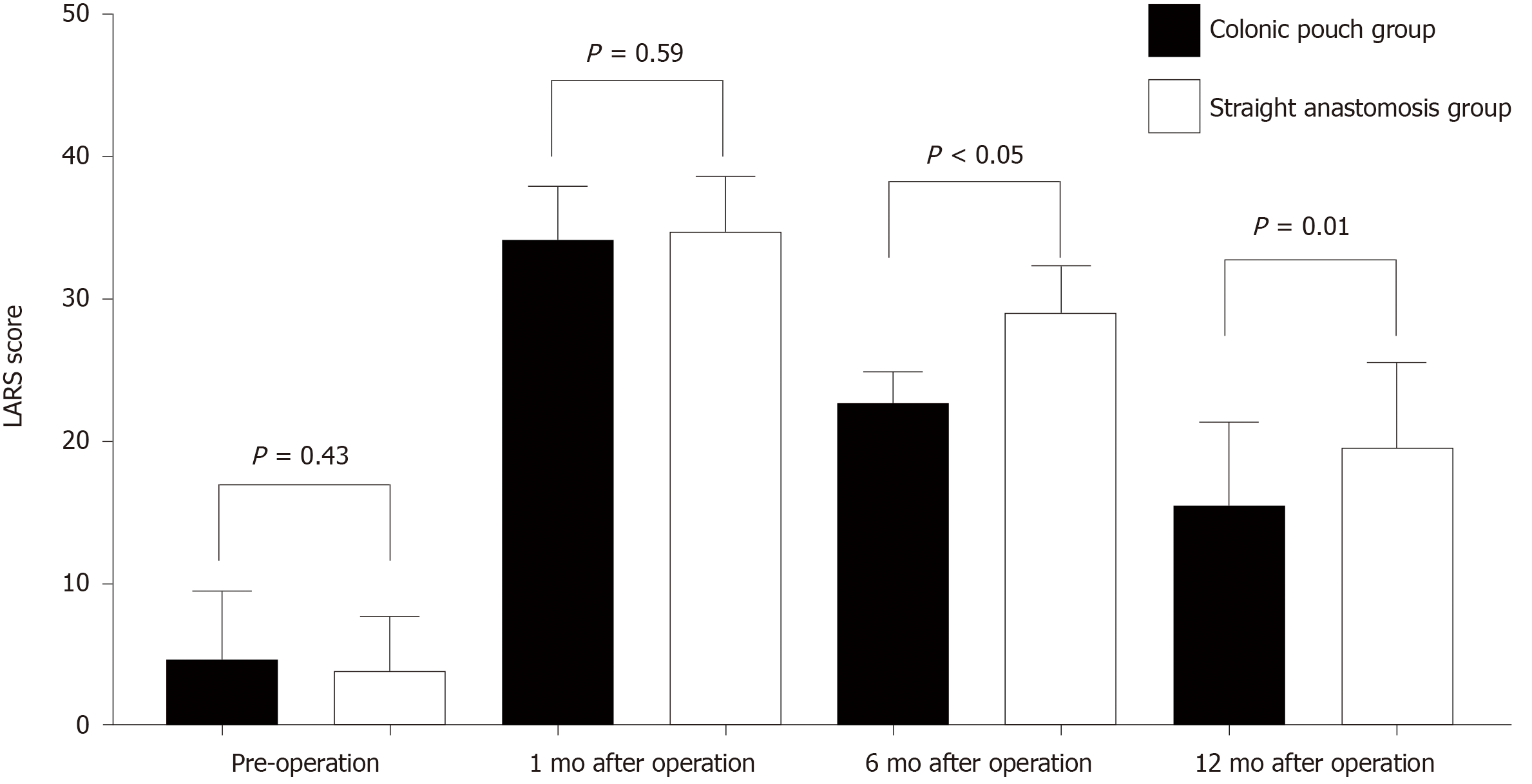 Ro resection was performed for all patients with low rectal cancer, which was confirmed by pathological analysis. There were no significant differences in numbers of positive lymph nodes and surgical margins that included distal and proximal resection margins (Table 1). The mean follow-up period of the entire cohort was 16.1 mo (range 9.0-26.0) [colonic pouch group: 14.5 mo (range 9.0-24.0); straight anastomosis group: 17.7 mo (range 10.0-26.0)]. The overall local recurrence rate was 4.3% (3/70). One patient in the straight anastomosis group with T4N2 developed local recurrence, and two patients in the colonic pouch group with T2N0 and T4N0 developed local recurrence. However, the overall metastasis rate was 11.4% (8/70). Three patients in the colonic pouch group developed pulmonary or hepatic metastasis. In the straight anastomosis group, five patients developed pulmonary or hepatic metastasis (Table 4). The disease-free survival rates of recurrence and metastasis were similar between the two groups (P = 0.63) (Figure 4). 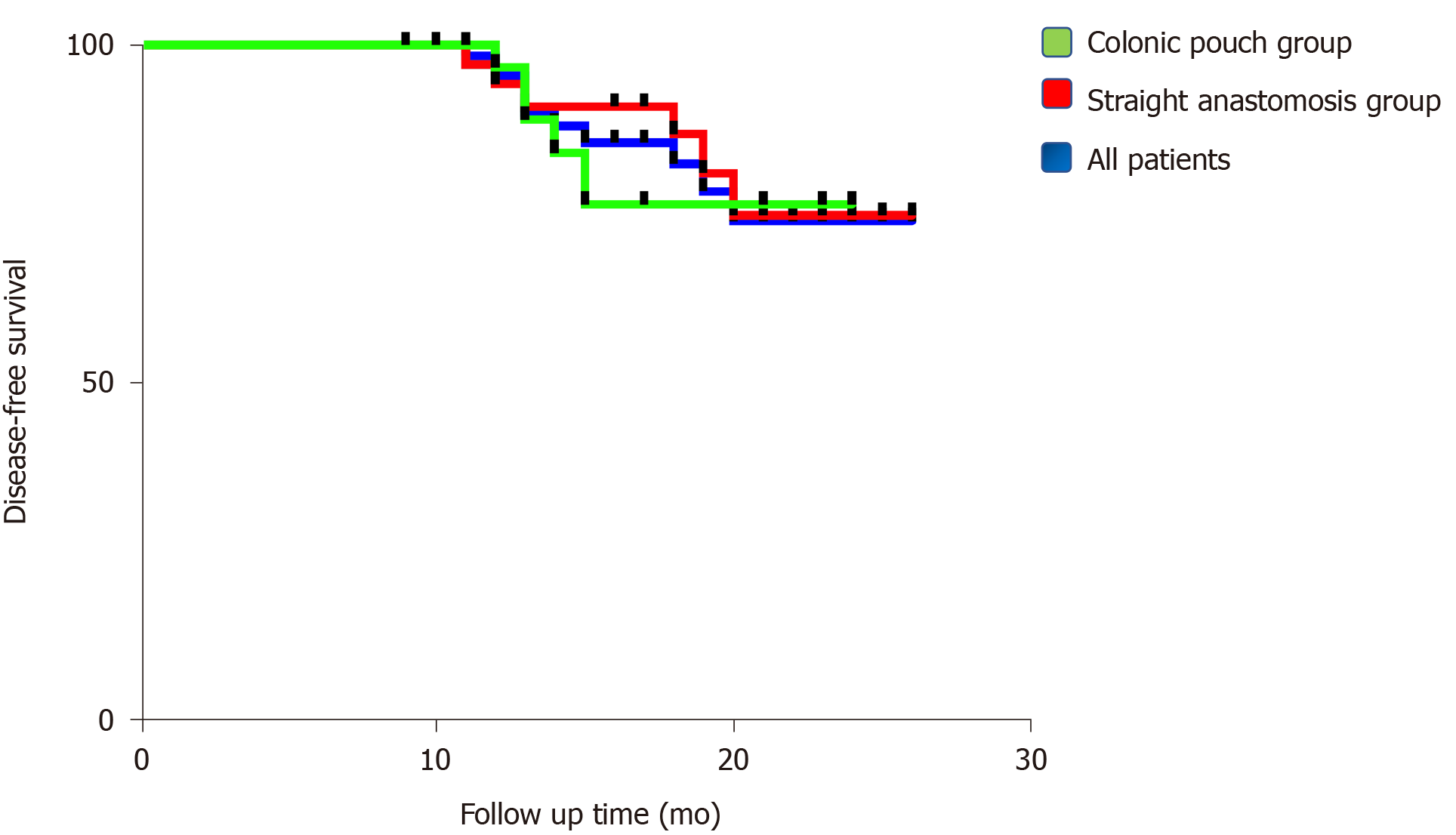 This study has some limitations. First, it is a retrospective study with a small sample, so the conclusion needs to be further confirmed by a prospective study with a larger sample in the future. Second, the pouch patients had a significantly low tumor height and anastomosis height, which may be a confounding effect. Patients who underwent LAR or ULAR have a small remaining rectal volume and almost no bowel storage function. Therefore, this effect may not affect the primary outcome. At the same time, the lower the tumor and anastomotic location, the worse the intestinal function[30,31]. However, colonic pouch had better bowel function than straight anastomosis even though the colonic pouch group had a lower tumor and anastomosis location, which further confirms that colonic pouch is better for bowel function compared with straight anastomosis.

Patients undergoing surgery for low rectal cancer often have major ARS and should be offered the best postoperative outcome. Our study demonstrates that the use of colonic pouch anastomosis gives a superior functional result when compared with traditional straight anastomosis for low rectal cancer. With the increased use of sphincter-saving procedures, improvements of the quality of life of patients undergoing LAR or ULAR become increasingly important. Despite imperfect evacuation, the overall well-being of bowel function was significantly better in the pouch group. Therefore, colonic pouch anastomosis is a good option for patients undergoing LAR or ULAR.

Identify the role of colonic pouch for low rectal cancer.

Future prospective randomized trials are required to validate the findings of this study.

We would like to express our gratitude to all those who contributed to the study. This work was supported by the First Affiliated Hospital of Chongqing Medical University.