Secondary malignancies of the thyroid gland are a rare finding in clinical practice. In addition, colorectal metastasis to the thyroid (CMT) is even more infrequently diagnosed. The source of the primary tumor follows demographic and ethnic patterns, which reflects the most prevalent malignancies in the different populations. Colorectal cancer is one of the most common types of cancer worldwide; nevertheless, CMT is infrequently diagnosed. Most of them are identified during the follow-up of gastrointestinal primary malignancies. Due to the improvement of image techniques, oncological treatment, and follow-up, survival and consequent diagnosis of metastatic disease are more frequent. Those facts make this entity a diagnostic and therapeutic challenge, due to the lack of information and the difficulties performing clinical trials and research.

Here, we present a case report of a patient diagnosed with CMT of adenocarcinoma of the rectum evidenced during follow-up, 4 years after neoadjuvant chemoradiotherapy, who had subsequent curative surgical treatment of the primary tumor and inter-current lung bilateral metastases.

Thyroid metastases of extra-thyroid origin are an uncommon finding, even rarer in cases of CMT. The diagnostic process, as well as survival of oncologic patients is improving, and consequently the number of metastases to the thyroid gland is increasing.

Core tip: Thyroid metastases of extra-thyroid origin are an uncommon finding, particularly in cases of gastrointestinal, colon, and rectum malignancies. The diagnostic process, as well as survival of oncological patients is improving. Consequently the number of diagnosed metastases to the thyroid gland is increasing. However, the management and outcome of these patients remain unclear, making it necessary to conduct more clinical research to define diagnostic and therapeutic protocols to provide a suitable treatment and a positive impact on outcome. Our objective was to review the current literature in the context of a recently diagnosed case in our hospital.

The thyroid gland is an infrequent site for extra-thyroid metastases. This clinical finding accounts for 1.5%-7.5% of all malignant diseases of this organ. Despite its rarity, metastases to the thyroid seem to be more common in autopsies of oncologic patients, recording an incidence of up to 24%[1-4].

The mechanisms involved in the low incidence of metastases to the thyroid gland are still unclear. Some authors support the hypothesis of rich and fast arterial flow through the gland, in addition to high values of oxygen and iodine, which would prevent the adhesion and growth of tumor cells[5,6].

The most frequent origin of thyroid metastases is primary tumors of the kidney [clear cell carcinoma (CCC)], accounting for about half according to some authors[4-6]. Other sources are the lung, breast, and gastrointestinal tract. The multiple origins of thyroid metastases are related to the most prevalent cancer types due to particular demographic, ethnic, and epidemiological issues of the different studied populations[4]. Treatment and prognosis of colorectal metastasis to the thyroid (CMT) remain unclear, and its low incidence and prevalence makes clinical research almost impossible[7].

During the last decade, an increase in diagnosis of CMT has been noticed, probably due to improvements on image techniques and protocols of treatment and follow-up, which might be responsible for the longer survival of oncologic patients[5,8,9]. Some case reports of CMT have been described in the literature[10-14].

A 50-year-old woman was admitted to our hospital with the main complaint of a fast-growing thyroid node and appearance of a right cervical lymph node.

The patient was previously under levothiroxine treatment due to sub-clinical hypothyroidism, and subsequent thyroid function was normal.

On November 2014, the patient had undergone anterior rectal resection and mesorectal total excision due to a previous history of rectal bleeding, and was diagnosed with adenocarcinoma of the rectum on September 2014.

Prior to surgical treatment, the patient had received neoadyuvant radiation (50 Gy) and capecitabine. Histological examination of the specimen confirmed adenocarcinoma of the rectum T3N0M0. She was discharged on the eighth postoperative day after a non-complicated postoperative course and received adjuvant chemotherapy. After the third session of Xelox (capecitabine and oxaliplatin), she presented with a cutaneous adverse response, and thus was switched to Tomudex (Raltitrexed), finishing on July 2015 after eight cycles.

A new adjuvant Folfiri (folinic acid, 5-fluorouracil, and irinotecan) therapy was administered, but unfortunately had to be suspended during the second cycle due to toxicity. Metastasectomy of the left lung was performed in October 2017, followed by subsequent lobectomy and linfadenectomy of the right lung in December 2017. After surgical treatment, the patient rejected more chemotherapy. At 1.5 year after lung surgery and 43 mo after diagnosis of primary tumor, the patient noticed a right thyroid nodule and hoarseness, which were confirmed by physical examination. 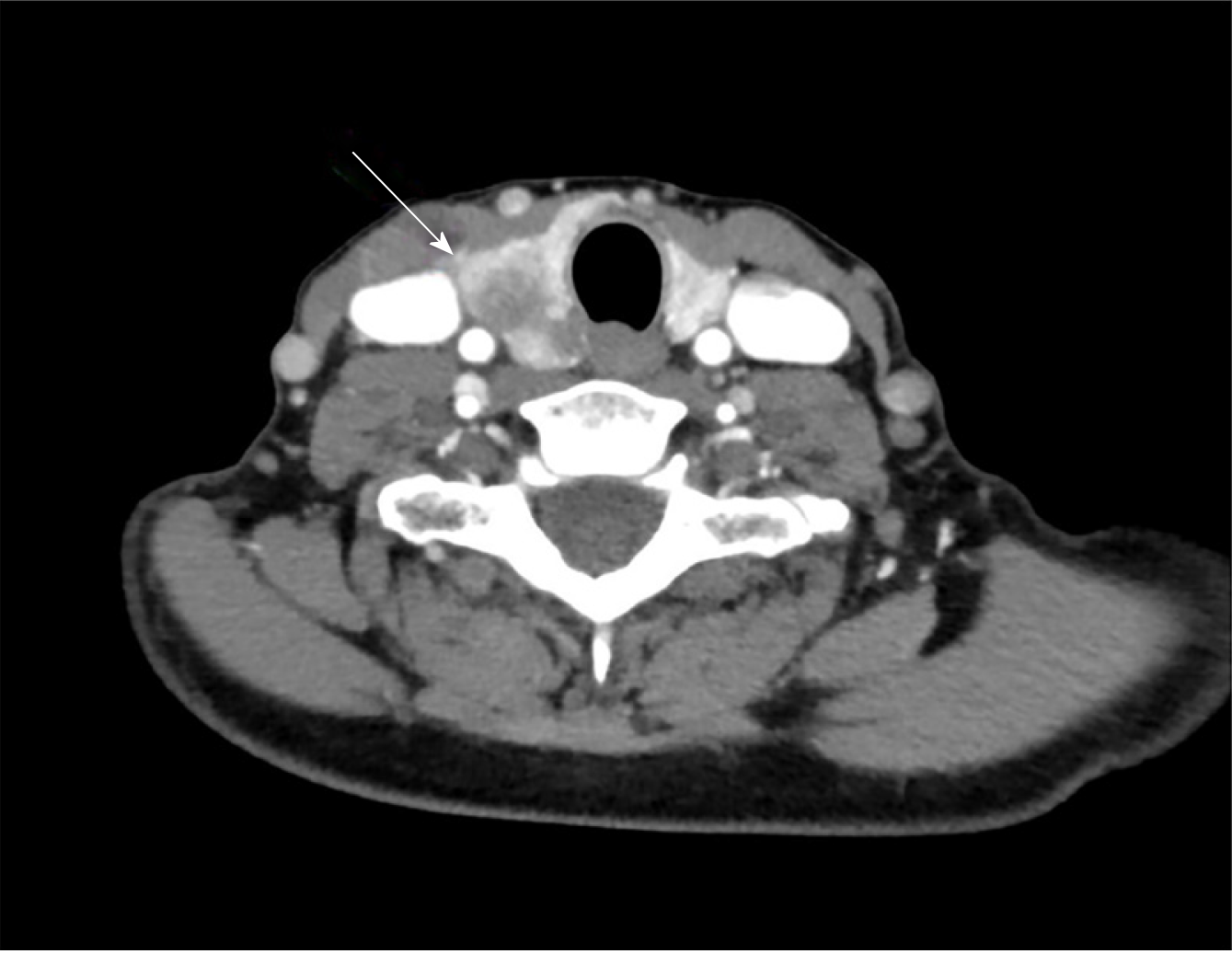 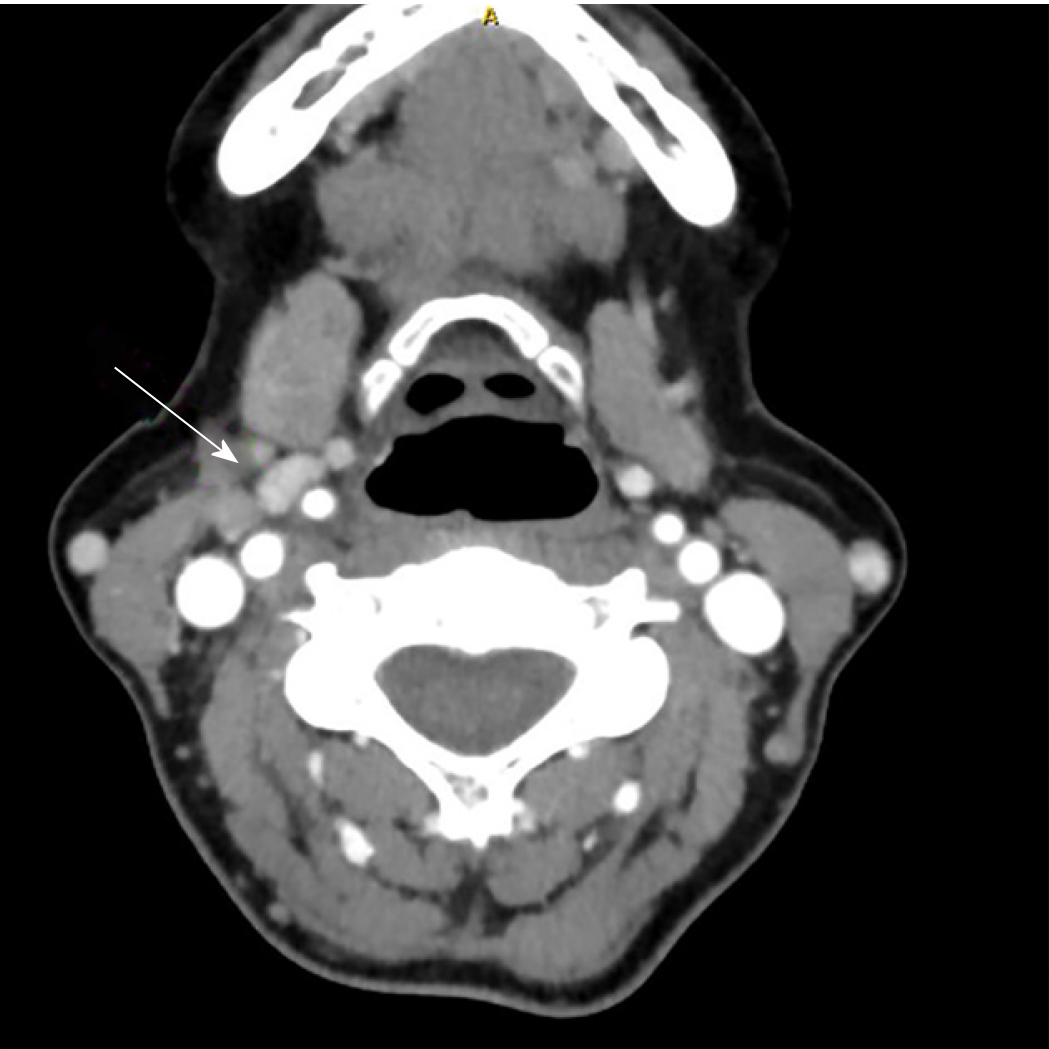 The patient underwent surgery on May 2019, finding an enlarged thyroid gland in contact with the trachea, esophagus, and right recurrent laryngeal nerve. A frozen section informed metastatic infiltration of the thyroid gland by adenocarcinoma of gastrointestinal origin. Total thyroidectomy, central lymph node dissection, and right lateral neck dissection were performed. During the postoperative course, the patient developed a clinical hypocalcemia and right vocal cord palsy. The patient was discharged 4 d after surgery. 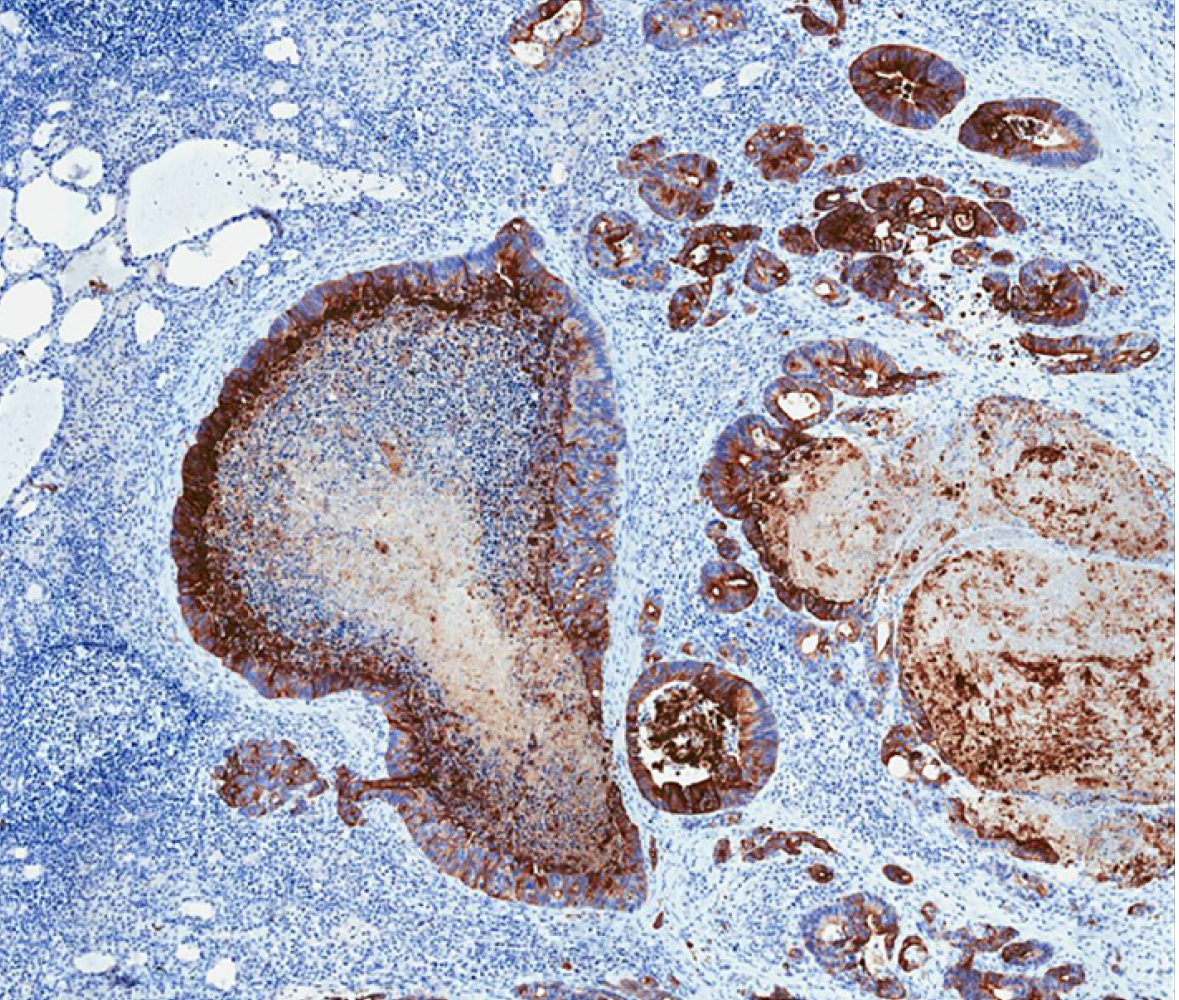 The patient (5 mo after thyroidectomy and 61 mo after diagnosis of the primary tumor) is currently under oncologic follow-up, and a new type of chemotherapy based on raltitrexed, oxaliplatin, and bevacizumab has been proposed.

Thyroid metastasis of adenocarcinoma of the rectum.

The patient is currently under oncologic follow-up, and a new type of chemotherapy based on raltitrexed, oxaliplatin and bevacizumab has been proposed.

The reasons that explain the infrequent settlement of extra-thyroid metastases to the thyroid gland remain unclear. The thyroid gland has a high blood flow, which could be responsible for the difficulty of malignant cells to settle and grow. In addition, the elevated concentration of oxygen and iodine throughout the thyroid gland might also prevent the growth of tumor cells. Some authors have noticed a higher prevalence of thyroid metastases in the context of a diseased gland, with thyroid adenomas, multinodular goiter, and thyroiditis being the most frequent entities. The reduced blood flow and iodine content would probably explain the susceptibility to host metastases[5,6].

A few groups have focused on this specific topic, developing retrospective studies with the aim of identifying and analyzing secondary malignancies of the thyroid gland. Wood et al[1] presented a retrospective series of 15 metastases to the thyroid gland of a total of 1016 patients. They found a prevalence of 1.5%, according to literature, and a high prevalence of kidney CCC. In contrast, other authors have found a much lower incidence of thyroid metastases of extra-thyroid origin, accounting for 0.13%[1,4]. If focusing on colorectal metastases, Lièvre et al[2] found a prevalence of 0.1% of CMT during a period of 10 years.

The most frequent origins are renal CCC followed by lung, breast, and gastrointestinal tract, although some demographic variability has been observed. The review of Asiatic series by Chung et al[5] found a higher prevalence of CCC accounting for almost half of the secondary disease of the thyroid gland (48%), followed by CMT (10.4%)[5]. Other retrospective studies agree with these findings, showing a prevalence of CCC origin of the thyroid metastases up to 76%[6].

On the contrary, Papi et al[4] found the lung as the main primary source of thyroid malignancies, followed by CMT, probably due to the high prevalence of lung and colorectal cancer in European countries.

The most common clinical findings are fast enlargement of the thyroid gland, rapidly growing thyroid nodes, and hoarseness. In some cases, acute onset of compressive symptoms, particularly invaliding dyspnea, may lead to urgent surgical treatment to secure the airway, and occasionally with palliative intention[1,5,6]. Incidental diagnosis during routine physical examination or its finding in the context of oncologic follow-up is also feasible[3].

Most patients, including those affected by CMT are euthyroid. Changes on thyroid function are uncommon and tend to occur late. Hypothyroidism as well as thyrotoxicosis may be a consequence of massive infiltration of the thyroid gland[3,5]. Most patients (60%-80%) according to Nixon et al[3] are diagnosed with thyroid metastases in the clinical setting of a previous malignant disease, both incidentally, due to evident symptoms or during image techniques performed as part of the follow-up. That encourages many authors to alert a high index of suspicion, especially in the case of previous oncologic history[3,8].

In addition, the accuracy and spread of diagnostic image techniques such as CT scan, magnetic resonance imaging, and PET/CT might be responsible for an increased number of CMT. Moreover, generalization and improvement of oncological therapies redounds on a longer overall survival of oncologic patients, which will probably lead to the late appearance of metastases to infrequent sites such as the thyroid gland[2,8,9].

Also, differential diagnosis with primary malignancies of the thyroid gland, which can be complex, has to be taken into account. In order to simplify this diagnostic challenge, FNAB, cytology reports, and histological examination can be of great importance, all identifying primary thyroid malignancies or assessing the primary source of the metastases, although false negative and false positive rates have been described[2,4,5,10,12].

CMT can be diagnosed as synchronous and metachronous to the primary tumor, and can also appear many years after curative treatment of the primary tumor[1,7,8,11]. Lièvre et al[2] found a median disease-free interval of 61 mo from diagnosis of colorectal cancer to the confirmation of the CMT.

There are controversial opinions regarding the treatment of thyroid metastases of extra-thyroid malignancies. Some authors have advocated surgical treatment based on total thyroidectomy, while others have considered lobectomy as a valid option. The main objective is the achievement of negative margins in the specimen[1,3,6].

The lack of experience and clinical trials in specific cases of CMT make the decision-making process even more difficult. Some authors have advocated for surgical treatment, as in selected cases, it might improve the patient outcome. In other cases, it might prevent the wide spread of metastatic disease by achieving local control. Otherwise surgical treatment is recommended at the onset of compressive symptoms[2,4,7].

Chung et al[5] even defend a total thyroidectomy in cases of a diseased thyroid gland and a previous oncologic history, in spite of the cytological result after a FNAB. Mirallié et al[7] agree and also recommend lymph node dissection if clinical or image evident cervical lymph nodes are detected[5,7,13]. In some cases, palliative surgery is the only feasible option, in association with chemotherapy and/or radiotherapy[7,13].

To summarize, secondary malignancies of the thyroid gland are a rare entity. In addition, CTMs are even more rare, despite the high prevalence of colorectal cancer in developed countries. Due to a more concerned follow-up of oncologic patients and improvements in diagnostic techniques and cancer treatment, the rate of distant metastatic disease has become more frequent, including its appearance in infrequent sites as the thyroid gland. The main objective is to correctly identify the CMT and discharge other clinical entities as primary disease of the thyroid gland. In this context, FNAB and cytological examination could be of great help, especially in cases of a previous oncologic history. Some authors have suggested different surgical techniques as a curative treatment, based on complete resection of the thyroid metastases, if tumor-free margins are guaranteed. On the other hand the infrequency of the situation makes it difficult to draw clear conclusions and management protocols, and makes us advocate for an individualized treatment.