Solitary fibrous tumor of the liver (SFTL) is a rare occurrence with a low number of cases reported in literature. SFTL is usually benign but, 10%-20% cases are reported to be malignant with a tendency to metastasize. The majority of malignant SFTL cases are associated with a paraneoplastic hypoglycaemia defined as Doege-Potter syndrome. Surgery is the best therapeutic treatment, however, long- life follow-up is recommended.

A 74-year-old man, was admitted to the emergency department after a syncopal episode with detection of hypoglycaemia resistant to medical treatment. The computed tomography revealed a solid mass measuring 15 cm of the left liver. An open left hepatectomy was performed with complete resection of tumor. Histopathological analyses confirmed a malignant SFTL.

Core tip: Solitary fibrous tumors (SFTs) are rare mesenchymal tumors first described in 1931 by Klemperer and Rabin. Usually, SFTs are benign, but 10%-20% of them are reported to be malignant with a tendency to metastasize. At present, 22 cases of liver malignant SFTs, including our patient, have been reported in literature. Some cases are associated with a paraneoplastic hypoglycaemia definied as Doege-Potter syndrome. Surgery is the best therapeutic modality and prolongs life, but also improves the clinical characteristics associated with Doege-Potter syndrome if present. Longlife follow-up is recommended.

Solitary fibrous tumors (SFTs) are rare mesenchymal tumors first described in 1931 by Klemperer and Rabin[1]. Originally the are usually found in pleura but they have also been reported in other serous cavities such as pericardium and peritoneum. Such tumours have also been described in other unusual organs such as the liver, orbit, retroperitoneum, maxillary sinus, pancreas, upper respiratory tract, lung, soft tissues, kidneys, thyroid gland, meninges, and prostatic gland[2,3].

SFTs of the liver (SFTLs) are some of the most uncommon SFT, with only approximately 84 reported cases in the English literature[1]. SFTs are usually benign, but 10%-20% cases are reported to be malignant with a tendency to metastasize[2]. Histologically, they are characterized by proliferation of spindle cells, and immunohistochemically are positive for CD34 and BCL2 and bland for CD99[4].

Clinico-radiological features are not specific, therefore the diagnosis can be made only on the basis of histopathological data[2]. Some cases of malignant SFTs are associated with a paraneoplastic hypoglycaemia defined as Doege-Potter syndrome, described in pleural and extrapleural tumors[5].

Surgery is considered the best therapeutic modality, with outcomes dependent on resectability. Resection prolongs life, but also improves the clinical characteristics associated with Doege-Potter syndrome if present[6]. Longlife follow-up is recommended. We reported a new case of malignant SFTL treated at our Institute and reviewed 22 cases of this rare tumor present in English scientific literature.

A 74 years old man, was admitted to the emergency department for syncopal episode, with detection of hypoglycaemia resistant to medical treatment.

A total body computed tomography (CT) was performed and revealed a solid mass measuring 15 cm of the left liver. The intravenous contrast demonstrate an inhomogeneous enhancement for necrosis within the tumour as well as a thick capsule that enhances during the portal phase (Figure 1). Radiological findings on abdominal magnetic resonance (MR) were similar to ones described for abdominal TC with evidence of a voluminous liver mass measuring 15 cm × 13 cm (Figure 2). There was no evidence of metastatic disease

Doege-Potter syndrome by malignant solitary fibrous tumor of the liver.

A left hepatectomy was performed with complete resection of tumor and free margin were obtained. Intraoperative ultrasound (IOUS) revealed a left liver tumor mass of 15 cm. There were no sign of contiguous organ invasion or other hepatic lesion. The parenchymal transection was performed with an ultrasonic dissector and bipolar sealers. On frozen section SFT present well circumscribed but unencapsulated border with infiltrative pattern and central necrosis (Figure 3). 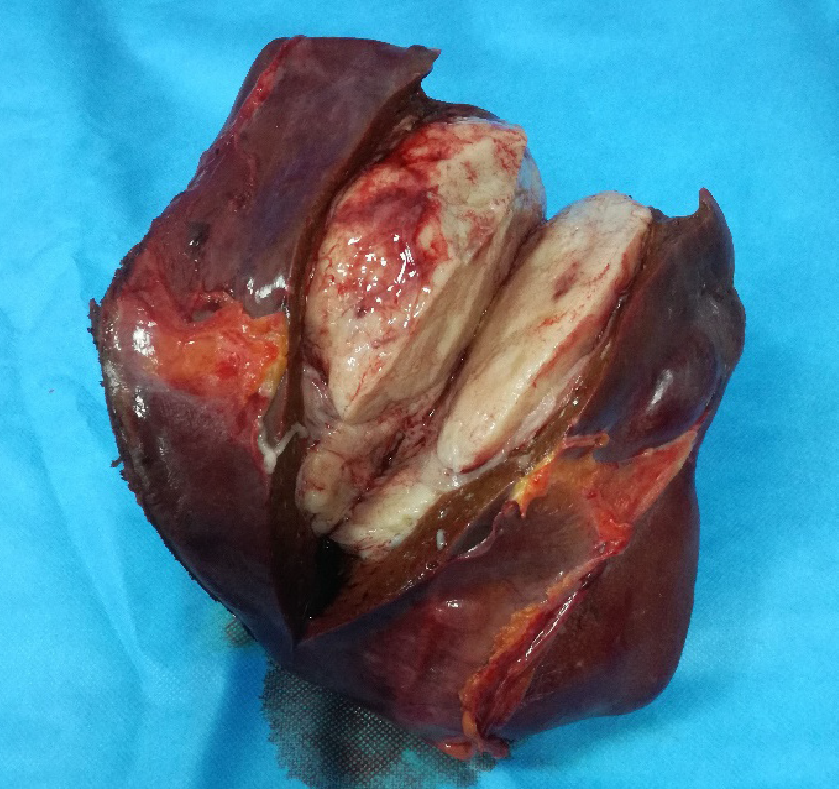 Immediately after surgery glucose serum levels returned to a physiologic daily profile. The patient was discharged on postoperative day four without complications. Histopathological analyses confirmed a malignant SFTL; microscopically, the tumours tissue showed a proliferation of spindle cells with infiltrative pattern of hepatic parenchyma, immunochemistry show strong positivity for CD34 and BCL2 and bland for CD99 and negative for ActinaML, Desmine, Cd117, CK pool, S100. The mitotic activity index Ki67 was 35% (Figure 4). Adjuvant protocol of chemiotherapy with Epirubicin and Ifosfamide was started. The patient was subjected to a strictly follow-up every 3-4 mo in the first 2-3 years after surgey, twice each year up to the 5th year and then once a year after the 5th year. Five months after surgery there were no signs of local recurrence or distant metastases. 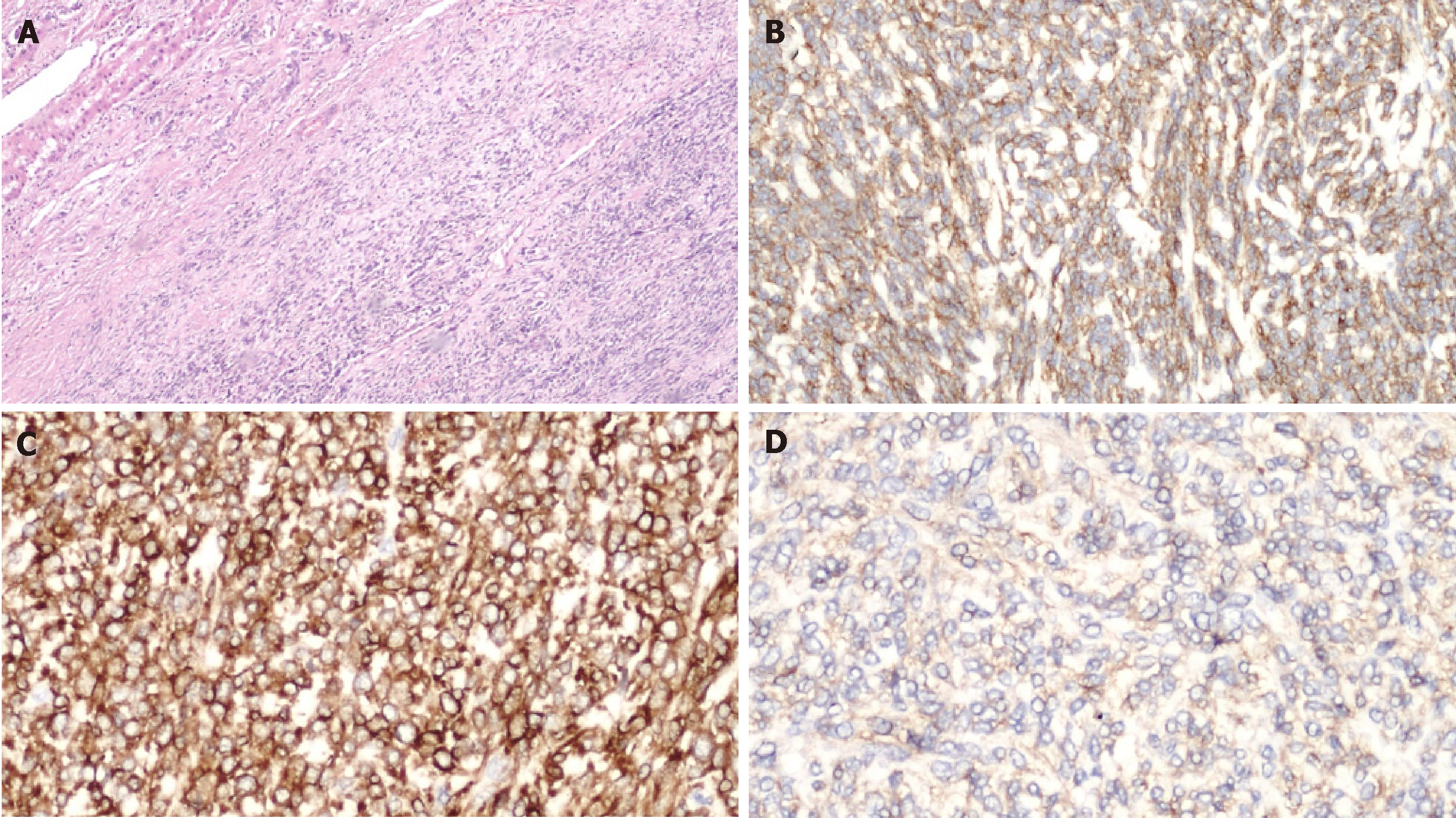 An English literature search regarding “Solitary fibrous tumor of the liver”, “Malignant solitary fibrous tumor of the liver”, “Mesenchymal tumor”, “Hepatic tumor”, “Doege-Potter syndrome” was conducted using the common search engines and the relevant articles were reviewed and analysed. The reference list of each article was inspected searching for other articles reporting SFTL that were analysed and included in this report.

We selected all cases of malignant SFTL reported in the literature considering a total number of 19 articles and we excluded cases of benign SFTL or extrahepatic localization. At present, 22 cases of malignant SFTL, including including the patient described in this article, have been reported in literature (Table 1). All represent case reports except for one case series with three case series described by Maccio et al[7].

SFT first described in the year 1931, is a rare neoplasm commonly located in the pleura and this tumor accounts for less than 2% of all soft tissue tumors[8,9]. SFT is considered a benign tumor with the potential for malignant transformation but the classification of this neoplasm is not yet clear in literature[4,10]. SFT of the liver (SFTL) is particularly rare, therefore the classification as a benign or malignant tumor remains controversial[11]. SFTL was reported for the first time in an article published in 1959 by Nevius and Friedman where three SFT in different localizations were described, one of them was a liver SFT and was clinically presented with hypoglycaemia[12].

Chen et al[1] reported that 16 of 84 SFTL were malignant, which was similar to the intrapleural SFT recurrence rate of 20%-67% among malignant tumors. Histologically the tumour exhibits a hypercellular spindle-cell proliferation creating storiform arrays with hemangiopericytomatous branching vessels and a moderate to marked atypia. There was parenchymal invasion and no vascular infiltration. High mitotic count (12 per HPF) was observed.

Immunochemistry show strong positivity for CD34 and BCL2 and bland for CD99 and negative for EPAR1 Cytokeratin, CD117, DOG1, ActinaML and Desmine. The mitotic activity index Ki67 was in range from 15% to 20%. SFTL tendencies to be well circumscribed and encapsulated or partially encapsulated, with infiltrative pattern and central necrosis and a growth of > 20 cm in diameter. Malignant SFTL is rare with only 22 cases reported in literature including the present case (Table 1). Literature reported that SFTL usually occurs in female patient over 45 years of age, with no apparent predisposition, in either the right or left sides of the liver[1].

Clinical presentation of these tumors is usually non-specific and the majority of the patients are initially asymptomatic, with an incidental diagnosis, until the tumor attains a large size and presents with symptoms due to mass effect with compression of adjacent organs[2]. Clinical symptoms reported are non-specific, such as weight loss, right upper quadrant pain, fatigue, abdominal distension, gastric plenitude associated to nausea and postprandial vomit depending by tumor size[3]. The clinical presentation of malignant SFTL did not differ notably from the clinical presentation of benign SFTL, have described cases with intractable hypoglycemia[17], unspecific symptoms including abdominal pain and weight loss or muscular and neurological symptoms due to metastatic disease[18,19]. Hypoglycemia (diaphoresis, tremor, anxiety, and lost consciousness) accompanying SFT is the predominant symptom of Doege-Potter syndrome, generally is associated with malignant SFT and was first described in 1930 in a case report by Doege[20-22].

Our patient was conducted at our institution for a left liver mass and severe hypoglycaemia. The physical examination was not specific, in the literature the rare possibility of palpating a solid mass located above the right emmiabdomen and epigastrium is reported. In other cases, the abdominal circumference increases and peripheral edema develops[23]. We asked for an endocrinologist consultation, for the persistent hypoglycaemia, that rejected the insulinoma hypothesis for the low levels of insulin and C-peptide and confirmed that the hypoglycaemia was caused by the presence of insulin-like factors produced by the neoplasm. Although the serum values of IGF-I and IGF-II were normal, the IGFII/IGFI ratios was high.

The IGFII/IGFI ratio is considered a marker of high IGF-II concentration; a ratio of 3: 1 is normal, and in most IGFII-producing tumors the ratio is 10:1. In our case, the spontaneous symptomatic hypoinsulinemic hypoglycaemia, increased IGII/IGFI ratio (7:1), suppression of GH, and the associated clinical features made IGF-II-mediated hypoglycaemia the most likely aetiology.

The typical mechanism involves ectopic tumor production of insulin or other similar hormone such us insulin-like growth factor IGF-II, called “big IGF-II,” which has insulin-like effects on the body, stimulating glucose uptake by insulin-sensitive tissues and the tumor itself[3]. IGF-II expression is high during fetal life and is relatively independent from growth hormone. That is the reason why its expression is coherent with the development of this primitive mesenchymal tumor[3]. It has been observed that the hypoglycemia intractable is associated with malignant transformation, suggesting that this phenomena is due to increased biologic activity in malignant SFTL cells[17]. No specific laboratory parameters findings for SFTL are currently available. Laboratory tests such as blood count or C reactive protein, serum tumor markers such as carcinoembryonic antigen (CEA), alpha-fetal-protein (AFP), and carbohydrate antigen 19-9 (CA19-9) are normal[3,23,24].

Radiological studies are unspecific and cannot be definitively distinguish between malignant or benign hepatic tumors. Ultrasound identifies the presence of a solid well-defined ovoid heterogeneous mass, in some cases homogenous and hyperechoic compared with the normal hepatic parenchyma. Computed tomography with intravenous contrast demonstrate a well-defined encapsulated hypervascular tumor and progressive heterogeneous enhancement, it is possible to identify cystic/necrotic areas within the mass. Radiological findings on abdominal MR are similar to the ones described for abdominal CT. The clinical utility of positron emission tomography (PET) in SFTL has not been established[2,9,25].

The majority of SFTL display benign clinical features, even if it should always be considered potentially malignant. R0 surgical resection remains the only therapeutic option and it has been proved to the solution to normalize glycaemia. In these patients lifelong follow-up is recommended for the high risk of recurrence[3,17,26]. Considering the literature, benefit of radio and chemotherapy is unknown, as well as prognosis due to the little experience and understanding of the biological nature of the disease[27].