Acute epiploic appendagitis of the appendix (AEAA) is a rare self-limiting inflammatory disorder of the epiploic appendages (EA) close to the vermiform appendix, which often times mimicking the presentation of acute appendicitis (AA). To date, very few cases of AEAA have been reported. We report a case of a 52-year old man with the clinical suspicion of AA, but post-operative specimen examination confirmed AEAA as the final diagnosis.

A 52-year-old morbidly obese man presented to the emergency department with a 1-d history of the right lower quadrant (RLQ) abdominal pain. Physical examination revealed localized RLQ tenderness mimicking AA. The computed tomography abdomen was inconclusive, and a decision was made to perform laparoscopic appendectomy (LA). During the LA, an infarcted epiploic appendage at the tip of appendix and adherent to the abdominal wall was found, which was entirely excised. Final pathology showed congested and hemorrhagic epiploic appendage without any accompanied acute inflammatory changes in the wall of the appendix. Postoperative course was uneventful and he was doing well at seven months follow-up.

The possibility of AEAA should be considered in patients clinically suspected of having AA. Surgery is considered for those refractory to conservative management, with inconclusive diagnosis or develop complications at presentation.

Core tip: Acute appendiceal epiploic appendagitis is very rare condition challenging to differentiate from acute appendicitis clinically. Computed tomography abdomen plays a crucial role in diagnosis, while pain control with anti-inflammatory drugs is the treatment of choice. Surgery is only considered for those refractory to conservative management or develop complications at presentation.

Acute epiploic appendagitis of the appendix (AEAA) is a benign, mostly non-surgical inflammatory disorder of the epiploic appendages (EA), which are usually located adjacent to the tenia coli[1]. Although the actual incidence of AEAA is not well known, however, it has been reported in 0.3%-1% of patients initially suspected of having acute appendicitis (AA)[2]. The most common mechanism resulting in AEAA is the acute torsion of abnormally elongated and large appendages, which leads to ischemia and necrosis of appendages[3]. Also, the primary thrombosis of the epiploic appendage central draining vein has also been related to the development of AEAA[4]. It most commonly presents as acute, constant, and non-radiating right lower quadrant (RLQ) abdominal pain[5].

Moreover, computed tomography (CT) scan of the abdomen is considered as the diagnostic modality of choice for AEAA, while ultrasound abdomen is reserved for patients with equivocal finding on CT abdomen[2,6,7]. Additionally, conservative management with oral anti-inflammatory medications is the most appropriate management for AEAA patients, while those who fail the conservative management, those with new or worsening symptoms and those with complications are best treated with the surgical interventions[6,8-10]. Current knowledge regarding AEAA is limited and only rare case reports exist. In order to better understand and add our contribution to the available literature on this rare condition, we report a unique case of a 52-year-old male patient initially suspected of having AA, but post-operative specimen evaluation was significant for AEAA.

A 52-year-old man with a basal metabolic index: 43.4 kg/m2, presented to the emergency department complaining of acute RLQ abdominal pain of 18 hours duration.

His pain was severe, constant, non-radiating, and aggravated with movement, without any history of associated symptoms including nausea, vomiting, diarrhea, anorexia, fever, and chills. He denies any recent history of trauma.

His past medical history was significant for hypertension, laparoscopic cholecystectomy and open umbilical hernia repair.

Personal and family history was unremarkable.

Patient had an abdominal CT without contrast in the emergency room (ER), which showed a 1.0 cm × 1.8 cm focus of oval inflammatory changes surrounding central fat density adjacent to the tip of the appendix and inferior aspect of the cecum. This is likely due to epiploic appendagitis. Possibility of very early acute distal tip appendicitis cannot be entirely excluded but felt to be less likely.

Although these radiological findings are highly suspicious for AEAA, the possibility of very early acute distal tip appendicitis could not be entirely excluded at that moment (Figure 1). Despite the aggressive management with IV fluids and antibiotics, his abdominal pain persisted. 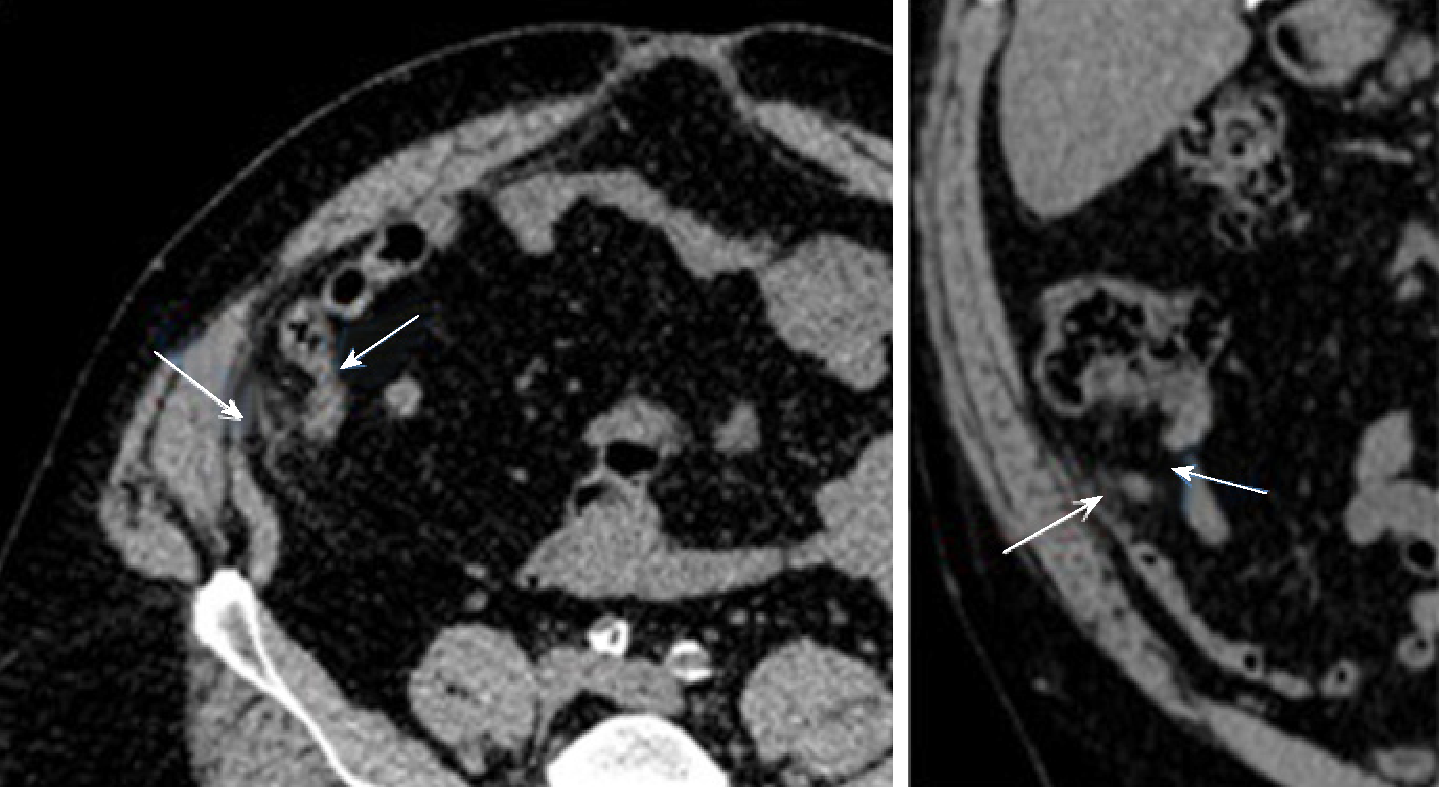 Based on the suspicious of early appendicitis, and the fact that the patient decided to choose surgery after our length discussion, a decision was made to perform an emergent laparoscopic appendectomy. During the laparoscopic appendectomy, mild hyperemic changes were noted in the vermiform appendix which was intensely adhered to the RLQ abdominal pain. Also noted was an infarcted epiploic appendage which was also attached to the tip of the appendix (Figure 2). At this moment, a complete laparoscopic appendectomy was performed, and the specimen was retrieved. Pathology report showed a tubular appendix measuring 42 mm in length and 6 mm in diameter on macroscopic examination. The congested and hemorrhagic appendage measured 6.3 cm × 1.6 cm × 1 cm. On microscopic examination, the tip of appendix had partial fibrous obliteration with perpendicular fibrin, and no acute inflammation identified in the appendiceal wall confirming the AEAA as the final diagnosis (Figure 3).

Figure 2 Infarcted appendiceal epiploic appendage at the tip of the appendix (Intraoperative).

The postoperative course was uneventful, and the patient was discharged on the following day. Patient was doing well at seven months follow-up.

Acute epiploic appendagitis (AEA), first described by Lynn et al in 1956, is one of the rare causes of acute abdomen secondary to the inflammation of the EA, which are 0.5-5 cm long and 1-2 cm thick serosa-covered fat pad pouches of the colonic wall[11,12]. Although the EA are distributed along the entire colon (50-100 in total), they are mostly populated in the rectosigmoid junction (57%), ileocecal region (26%), ascending colon (9%), transverse colon (6%) and descending colon (2%)[12].

AEA may be primary or secondary. Primary acute epiploic appendagitis (PAEA) is caused by torsion or spontaneous venous thrombosis of the involved epiploic appendage, while secondary epiploic appendagitis (SEA) is associated with inflammation of adjacent organs, such as diverticulitis, appendicitis or cholecystitis[13]. Moreover, the PAEA presents mostly in 2-5 decades of life without any sexual predominance, while SEA affects mostly middle-aged obese male population[3,11-13]. Also, the most common parts of the colon affected by AEA in decreasing order of frequency are the sigmoid colon, descending colon, cecum and the ascending colon[13].

AEAA is an even extremely rare form of AEA accounting for only 3% of all AEA cases. Shiryajev et al[14] described a case of AEAA secondary to underlying appendicitis, while Hambury et al[15] described an actual case of torsed EA of the vermiform appendix, which mimicked AA. Surprisingly, the luminal diameter of the EA near the vermiform appendix is usually smaller compared to those around the colon, making them susceptible to the early infarction after the torsion. Additionally, AEAA typically presents in the middle-aged male population with acute onset of right lower quadrant pain usually without associated symptoms such as fever, anorexia, nausea, vomiting, diarrhea, or constipation.

Given the non-specific clinical presentation of AEAA, the use of imaging technology plays a critical role in the diagnosis of this rare entity. Advances in imaging techniques made it possible to radiologically describe the first report of EA using CT scan abdomen in 1986[16]. The hallmark CT abdomen findings for AEAA include; fat attenuating oval lesion usually less than 2 cm with the hyper-attenuated rim located near the tip of the appendix[17]. Other less specific findings include localized edema, described at streaky fluid attenuation or fat stranding around the appendage[18]. Additionally, the appendix is usually normal in caliber without any enhancement or thickness of appendiceal wall[18].

Furthermore, AEAA is a self-limiting disease, and most of the patients recover within 1-14 d after the analgesic medication[12] Conservative management using non-steroidal anti-inflammatory drugs (NSAID) is currently considered the standard management for radiologically confirmed AEAA[3,19]. Antibiotics and surgery are reserved for those with worsening symptoms, or those who do not respond to conservative management, or those who develop complications such as the abscess or intestinal obstruction, new or worsening symptoms[12].

To comment further on the complex nature of the AEAA, we performed a literature search which yielded only seven case reports specifically for AEAA (Table 1). Based on the results of our literature search, we can conclude that most of the AEAA cases reported so far were an accidental finding in patients who underwent emergent appendectomy with a clinical diagnosis of AA in the absence of radiologic confirmation. Also, our literature search yielded AEAA effects mostly middle-aged population (32-63 years; mean = 42.7 years), mostly male (4/7, 62.5%), presents with RLQ pain, with normal or mild elevated white count (normal-13.3/mm3). Also, the maximum diameter of lesions was 1.3 to 1.8cm. It was found near the tip of the appendix (3/7), proximal appendix (1/7) and middle and distal one third (2/7).

AEAA is a rare cause of abdominal RLQ pain that can easily mimic the clinical presentation of AA. The advances in the diagnostic modalities have permitted the better radiological delineation of this rare entity, and have also reduced the burden of un-necessary surgeries on the United States economy. In the clinical settings of the non-specific clinical presentation of AA, CT abdomen should be ordered in order to rule out AEAA as the possible cause of acute abdominal pain. Additionally, in the absence of other complication, conservative management with NSAID should be considered as the initial management for AEAA before making decision for the invasive approaches.

We are thankful to Soraya Rodriguez, MD from the Department of Pathology at Brandon Regional Hospital, Florida for providing her valuable feedback in the interpretation of histology slides for this unique case report.