We report a case of eosinophilic enteritis involving the proximal small bowel, a relatively rare entity, presenting unusually as enteroliths in a 68-year-old man with complaints of anemia, malena and abdominal pain. The disease if diagnosed in the initial stages responds well to medical treatment but if associated with complications or misdiagnosed, surgical modality is the treatment of choice. In our case, the patient presented with enteroliths and strictures. Resection and anastomosis of the small bowel containing stones was carried out. Histopathology confirmed the diagnosis as eosinophilic enteritis.

Eosinophilic enteritis, a relatively rare entity, usually involves gastric antrum or proximal small bowel[1]. Eosinophilic gastroenteritis is defined as a disorder that selectively affects the gastrointestinal tract with eosinophil-rich inflammation in the absence of any known causes for eosinophilia[2]. The disease may be asymptomatic or may present as chronic anemia, recurrent abdominal pain, subacute and acute intestinal obstruction or as a rare presentation as enterolithiasis which has not been described previously.

In our case, the patient presented with enteroliths and strictures. Resection and anastomosis of the small bowel containing stones was performed. Histopathology confirmed the diagnosis as eosinophilic enteritis. .

A 68-year-old man was referred to us with complaints of chronic anemia, malena and abdominal pain for 15 years. The patient had been evaluated earlier and had been transfused on multiple occasions. His past medical profile was not suggestive of any associated medical condition and there was no history of use of herbal medications or excessive intake of tea or coffee. Baseline blood investigations, chest X-ray and ECG were normal. Stool for occult blood was positive. Upper gastrointestinal endoscopy and colonoscopy were normal. Ultrasound of the abdomen did not reveal any evidence of cholecystitis or cholelithiasis. The patient underwent a small bowel enteroclysis which revealed multiple strictures in the distal jejunum and proximal ileum with filling defects suggestive of enteroliths. The patient was subjected to exploratory laparotomy through a midline incision. There were multiple strictures at the junction of distal jejunum and proximal ileum with sacculations in between containing more than 10 enteroliths measuring between 4-20 mm (Figure 1). Resection and anastomosis of the small bowel containing stones was then carried out. The resected specimen was sent for histopathological examination. Abdomen was drained and closed in layers. The pathological report of the small bowel containing the enteroliths showed dense transmural infiltration of eosinophils, and eosinophilic enteritis was diagnosed (Figure 2). The biochemical analysis of the stones retrieved from the bowel showed the presence of calcium and oxalate crystals along with concretions of ingested vegetable fibre. Calcium oxalate was reported to be the major component of these stones. The patient had uneventful recovery and was discharged on the 10th postoperative day. 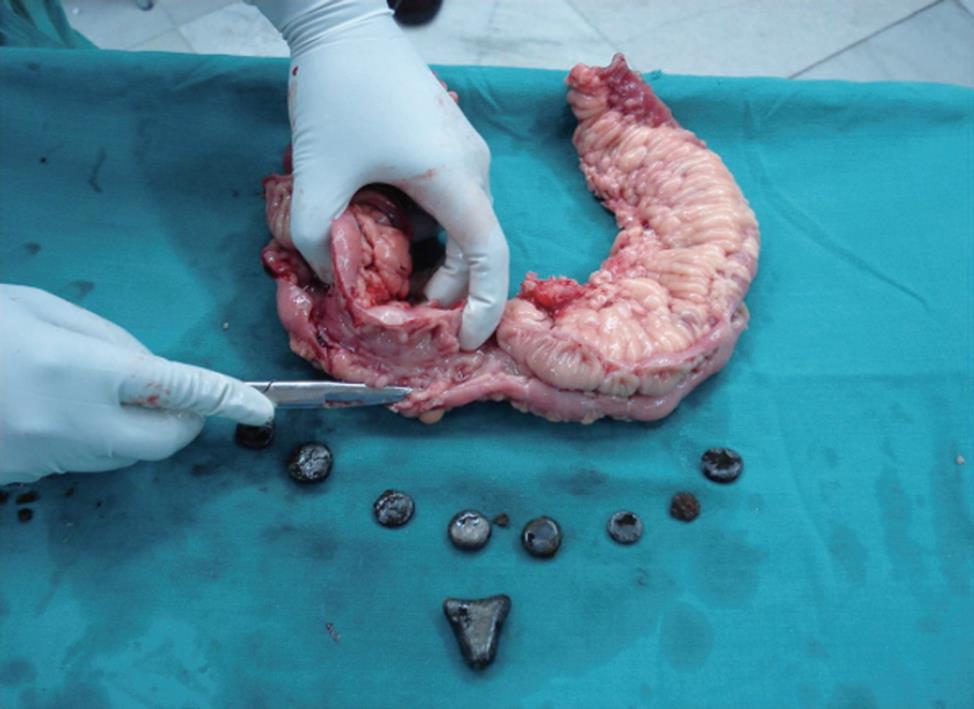 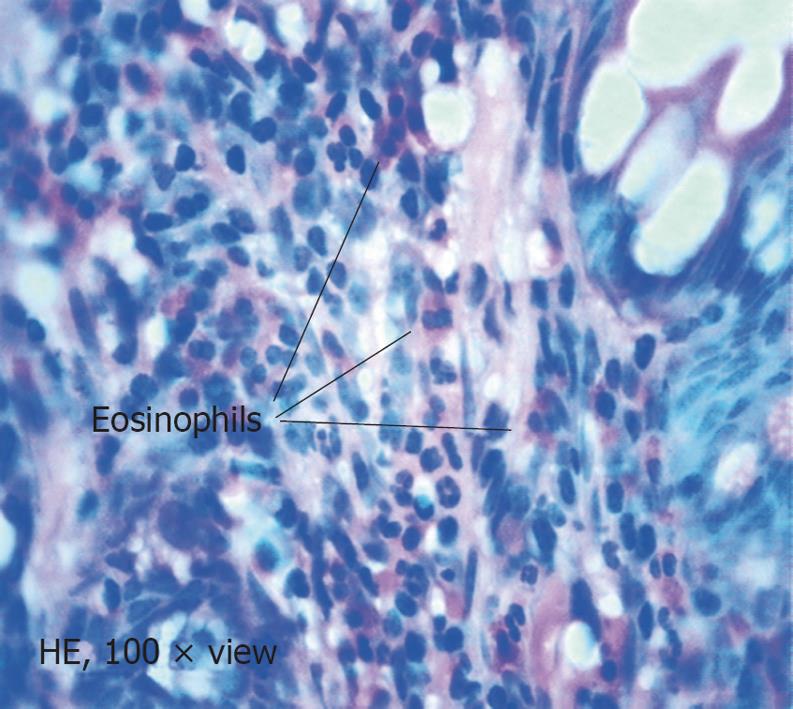 In contrast to the esophagus, the stomach and intestine have readily detectable baseline eosinophils under healthy conditions. Eosinophilic gastritis, enteritis and gastroenteritis are grouped together because they are clinically similar and there is a paucity of information available concerning their pathogenesis. However, it is likely that they are indeed distinct entities in most patients. These diseases are characterized by the selective infiltration of eosinophils in the stomach, small intestine, or both, with variable involvement of the esophagus, large intestine, or both[5,6]. It is now appreciated that many disorders are accompanied by eosinophil infiltration in the stomach, such as parasitic and bacterial infections (including Helicobacter pylori), IBD, hypereosinophilic syndrome (HES), eosinophilic enteritis, periarteritis, allergic vasculitis, scleroderma, drug injury, and drug hypersensitivity[7]. These disorders are classified into primary and secondary subtypes. The primary subtype includes the atopic, nonatopic, and familial variants, whereas the secondary subtype is divided into two groups, one is composed of systemic eosinophilic disorders (HES) and the other is composed of non eosinophilic disorders. Primary eosinophilic enteritis, gastritis and gastroenteritis have also been called idiopathic or allergic gastroenteropathy. The familial form has not been well characterized. Primary eosinophilic gastroenteritis encompasses multiple disease entities subcategorized into three types on the basis of the histologic involvement: mucosal, muscularis and serosal forms[8]. Of note, either layer of the gastrointestinal tract can be involved, so that endoscopic biopsy can be normal in patients with the muscularis subtype, serosal subtype, or both. No standards are available for the diagnosis of eosinophilic gastritis or gastroenteritis, but a few findings support the diagnosis[9]. For example, the presence of increased eosinophils in biopsy specimens from the gastrointestinal tract wall, the infiltration of eosinophils within intestinal crypts and gastric glands, the lack of involvement of other organs, and the exclusion of other causes of eosinophilia (e.g. infections and IBD) are supportive of eosinophilic gastroenteritis. The clinical presentations of eosinophilic enteritis depend on the site of involvement with eosinophilic enterits being asymptomatic or symptomatic. Symptomatic cases may present as chronic anemia, subacute intestinal obstruction due to strictures, acute obstruction due to intussusceptions or chronic abdominal pain[1,2,6].

The maximum size reported in the literature is more than 6 cm, and maximum number is up to 1400 enteroliths proximal to a postoperative stricture in a patient who had surgery for colon carcinoma[10]. Most of the conditions causing enteroliths are due to stasis or hypermotility[10]. Enteroliths in association with eosinophilic enteritis has not been reported so far in the literature to the best of our knowledge. Judging from published reports, cases of stones in the small intestine are rare. In the literature, the composition is described only in general terms. It would no doubt increase our understanding of the subject, and probably of lithiasis in general, if all such stones were reported and analysed as completely as possible.