Obesity is one of the most common metabolic disorders in developing countries and is characterized by a reduction in insulin sensitivity, both in animal models and in humans[1]. The incidence of obesity worldwide has increased drastically during recent decades. Consequently, obesity and associated disorders now constitute a serious threat to the current and future health of the population. The World Health Organization (WHO) estimates that more than 1 billion adults worldwide are overweight, 300 million of whom are clinically obese, defined as having a body mass index (BMI) equal to or greater than 30 kg/m2[2]. Obesity is associated with an array of additional health problems, including increased risk of insulin resistance, type 2 diabetes (T2D), fatty liver disease, atherosclerosis, degenerative disorders including dementia, airway disease and some cancers[3]. The molecular mechanisms involved in obesity-related insulin resistance are not yet well understood.

Postmenopausal obese women may be at increased risk for metabolic syndrome (MetS) because of the increase in total and central adiposity after menopause transition[4]. The emergence of these risk factors may be a direct result of ovarian failure or alternatively an indirect result of metabolic consequences of central fat redistribution with estrogen deficiency[5]. Adipose tissue is an active metabolic tissue that secretes multiple metabolically important proteins known as “adipokines” (leptin, adiponectin, tumor necrosis factor (TNF)-α, interleukin (IL)-6 and resistin etc.)[6,7]. These adipocyte derived products are presently subject to intensive research concerning their involvement in the regulation of adipose tissue physiology and in particular their potential implication in insulin resistance (IR), obesity and diabetes[8,9].

Plasma concentration of resistin is elevated in obesity compared to a healthy person. In humans and rodents, plasma resistin concentrations are positively correlated with BMI[10]. It is well documented that accumulation of visceral fat is associated with a higher risk for development of obesity-related diseases such as T2D, cardiovascular disease, hypertension and hyperlipidemia[11,12]. However, the role of subcutaneous adipose tissue (SAT) dysregulation could be a potential mechanism but its role in the pathogenesis of MetS has been conflicting[13]. The SAT, which comprises approximately 80% of adipose tissue and the major source of fatty acids for the liver, has metabolically correlated to indices of insulin resistance as well as to visceral adipose tissue (VAT)[14-17].

In addition to intra-abdominal fat, Salmenniemi et al[18] have shown that the amount of SAT in subjects with MetS positively correlates with increasing MetS and negatively correlates with circulating adiponectin levels. Carr et al[19] have also reported that SAT is significantly associated with MetS and increases with increasing number of MetS features, independent of age and sex.

Several studies have shown that both VAT and SAT are associated with adverse cardio metabolic risk factors[20,21]. Regardless of these observations and continuing debate regarding metabolic importance of VAT and SAT, it appears that both contribute significantly to metabolic and cardiovascular risks. However, due to higher mass of SAT than VAT, it may affect metabolic factors more significantly[22] and thus may have more clinical importance. Furthermore, subcutaneous adipocytes are larger than omental, have higher lipoprotein lipase activity and are more lipolytic on an absolute basis, which reflect a higher fat storage capacity in this depot, especially in women[23].

Recently, a significant link between SAT and dyslipidemia in patients with T2D was reported[24]. Visceral and subcutaneous adipocytes have different capacities to produce hormones and enzymes with variation in mRNA expressions of adipokines (resistin, adiponectin, TNF-α, IL-6 etc.) from various depots of adipose tissue[25].

In an animal study, expression of resistin in subcutaneous adipose tissue was controversial[26]. In humans, data on resistin is conflicting. Some authors have shown that it is elevated in individuals with obesity and diabetes[27-29], whereas others have shown that it is not elevated[30-32]. A recent study reported that human resistin induced insulin resistance and Metformin reversed the effect of resistin in hepatocytes[33]. Taken together, these studies suggest that the depot-specific expression of resistin at the mRNA level could be relevant to insulin sensitivity.

The literature regarding the SAT resistin expression in Asian populations, especially Indians, is lacking. Thus, with best our knowledge, the present study was undertaken with the objective to investigate SAT resistin mRNA expression in postmenopausal Indian women and its association with insulin resistance.

A total of 68 postmenopausal (non obese = 34 and obese = 34) age matched (49-70 years) women were recruited at CSM Medical University, Lucknow, India who underwent elective abdominal surgery for gall bladder stones or hysterectomy. Respective abdominal SAT was obtained during the surgery. During surgery, no specific standard diet and hormonal therapy were given to the patients, which ensured and ruled out the effect of hormones or diet on fat deposition. All tissue samples were stored in RNAlatar (Sigma-Aldrich) for RNA extraction. The study was approved by the Institutional Ethics Committee. Subjects were classified as obese according to BMI > 25 kg/m2, as per WHO’s guideline for Asians[34], and BMI < 25 kg/m2 as non obese served as control. Informed consent was obtained from each patient.

Homeostasis model assessment (HOMA), an index of IR[35] based on plasma levels of fasting glucose and insulin, has been widely applied for quantifying insulin resistance and β-cell function in an Asian population was evaluated as [HOMA-IR = fasting insulin (μU/mL) × fasting glucose (mmol/L)/22.5].

The basic characteristics viz. physical (age, weight, height and BMI) and biochemical parameters (insulin, glucose and HOMA index) of the two groups are summarized in Table 1. Table 1 shows that the mean weight, BMI, insulin, glucose and HOMA index were significantly (P < 0.001) higher in the obese compared to non obese. However, the age and height were found to be similar (P > 0.05) between the two groups, indicating the subjects of two groups were age matched. 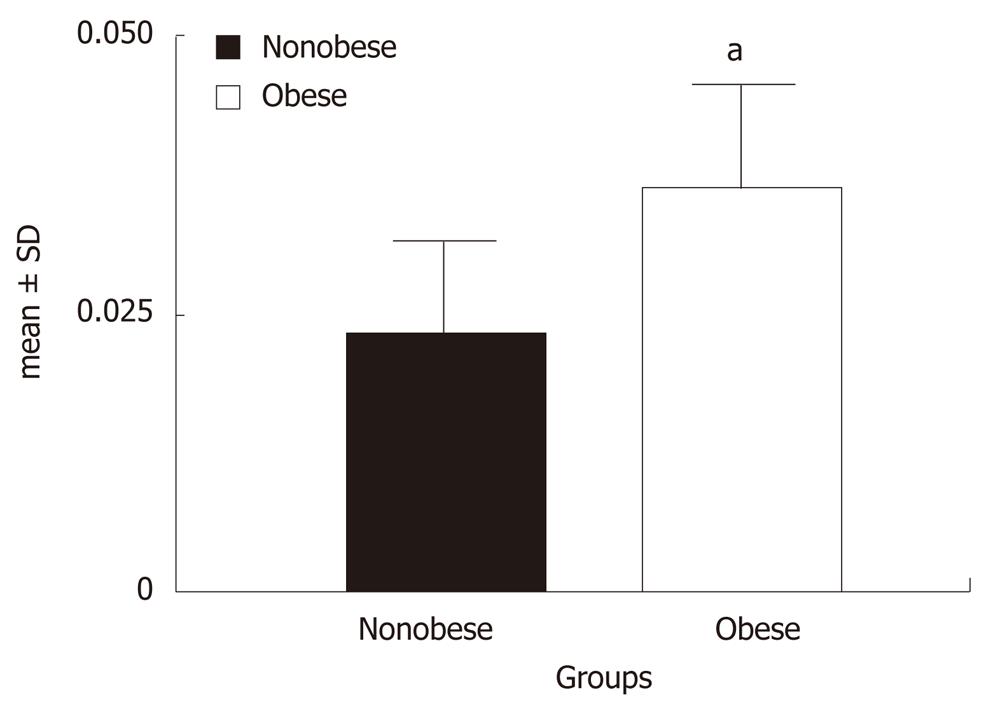 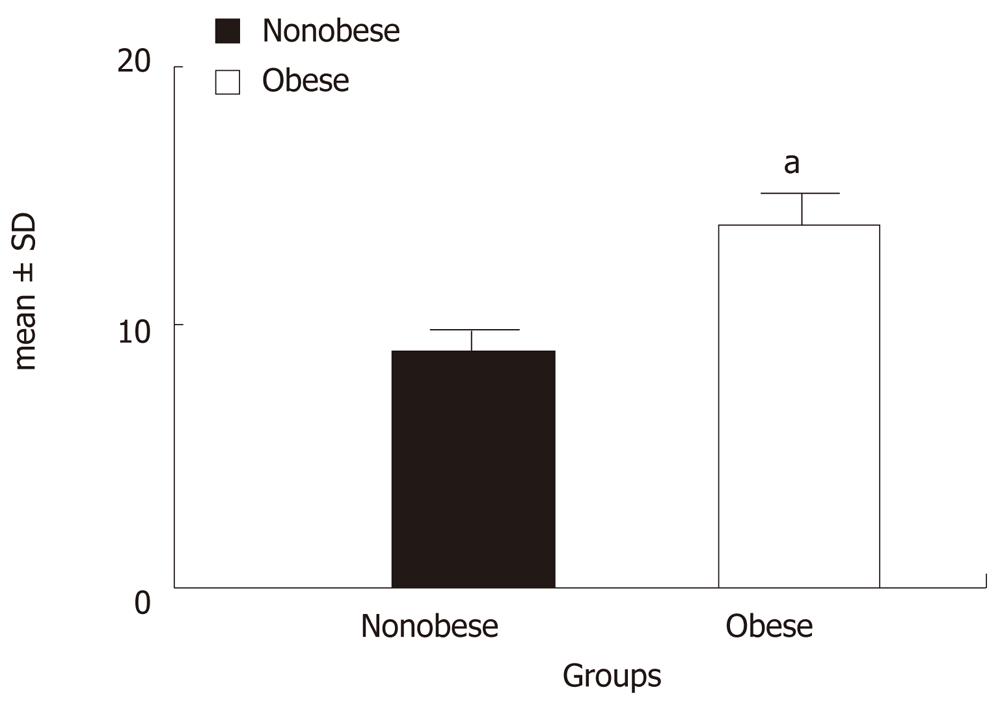 The physiological functions of resistin in humans have been mostly investigated at the levels of DNA polymorphisms and plasma proteins[36,37]. However, only a few studies have tried to relate the resistin mRNA levels to some physiological functions, such as obesity, diabetes and insulin sensitivity[29,38]. Furthermore, most of the mRNA studies consist of small sample sizes with controversial findings. Although the limitation of sample size prevented these mRNA reports from more comprehensive analyses compared with those studies using plasma resistin, the value of these studies should not be overlooked.

It was also shown that serum resistin had significant effects on insulin action, potentially linking obesity with IR[44]. Previous studies examined showed that serum resistin concentrations are raised in high-fat-induced obese and obese mice models[45]. It is well documented that administration of anti resistin antibody improves insulin action and glucose metabolism in mice with diet-induced obesity, suggesting a role for resistin in the development of insulin resistance[45]. In addition, a recent study showed that administration of recombinant resistin causes insulin resistance in mice[46]. It is also well documented that resistin decreases insulin-stimulated glucose uptake in 3T3-L1 adipocytes and the inhibitory effect is prevented by anti resistin antibody[45]. These findings strengthen the hypothesis that resistin may be a link between obesity and its associated risks.

In the present study, we also determined the level of serum resistin in obese and non obese postmenopausal women. Serum resistin was significantly higher in the obese than non obese. Our finding is in accordance with Degawan et al[29] who reported significantly higher resistin protein in the serum of obese than non obese. However, several studies showed that serum resistin level do not correlate well with markers of adiposity[8,31]. Savage et al[40] also reported no correlation between insulin resistance and resistin gene expression in whole abdominal adipose tissue. In contrast, we found positive and significant correlation of SAT resistin mRNA expression with BMI, HOMA and serum resistin levels in obese women. The finding is consistent with a recent finding which showed a strong correlation between serum resistin and resistin mRNA expression of abdominal SAT in the obese[30]. However, Yang et al[38] reported that resistin was undetectable in SAT and unrelated to insulin resistance. One study[29] reported higher SAT resistin expression in the obese and positive association with BMI but not related to insulin resistance. We hypothesized that the conflicting results regarding SAT resistin mRNA expression in humans may be due to race differences and environmental conditions.

In conclusion, we found higher and significant positive correlation of SAT resistin mRNA expression with serum resistin, BMI and insulin resistance (HOMA index), suggesting its potential role in development of insulin resistance and thus associated with obesity-related disorders. The findings of this study may have clinical implications but may be validated further on varied populations with large sample sizes.

We thank Dr. Shailendra Kumar Yadav and Dr. Surendra Kumar for assistance with subject recruitment and the staff of Arushi Hospital, Lucknow. We also thank the patients who participated in the study and donated their valuable adipose tissue.

The incidence of obesity has dramatically increased in recent years. Consequently, disturbances in secretion of resistin caused by obesity have an influence on the development of metabolic complications. It regulates insulin sensitivity but the role of resistin in insulin sensitivity is not yet determined. Many studies have reported that resistin decreases insulin sensitivity in rat models but it is unclear in humans. The aim of the present study was to investigate the relationship of subcutaneous adipose tissue (SAT) resistin mRNA expression with body mass index (BMI), homeostasis model assessment (HOMA) and serum resistin in obese postmenopausal Indian women.

Adipose tissue produces resistin which may play an influential role in energy homeostasis, triglyceride storage and mobilization of fat with increased adiposity, specifically central adiposity. Furthermore, it seems apparent that the pathogenesis of type 2 diabetes mellitus is mediated through the concurrent progression of insulin resistance and subclinical inflammation. The molecular mechanisms for this are less understood. The research hotspot is to establish the relevance of resistin to human diabetes, particularly its effects on the central nervous system and β-cell function.

Previous reports suggested that resistin secreted by visceral adipose tissue is responsible for development of obesity-related problems but we cannot ignore the role of subcutaneous adipose tissue. Most studies have been done in cultured cells but lack fresh adipose tissue. Furthermore, the literature regarding SAT resistin mRNA expression in Asians, especially Indians, is lacking. Our results showed a direct association of SAT resistin mRNA expression with BMI, HOMA and serum resistin levels in postmenopausal obese women.

Resistin is a member of a class of cysteine-rich proteins collectively termed resistin-like molecules. Subcutaneous adipose tissue: Most of the remaining non visceral fat is found just below the skin in a region called the hypodermis.

The paper investigates SAT resistin mRNA expression in postmenopausal Indian women and its association with insulin resistance. It is well and clearly written.