Desmoid type fibromatosis (DTF) is a rare, locally invasive, non-metastasizing soft tissue tumor. We report an interesting case of DTF involving the pancreatic head of a 54-year-old woman. She presented with intermittent dysphagia and significant weight loss within a 3-mo period. Laboratory findings showed mild elevation of transaminases, significant elevation of alkaline phosphatase and direct hyperbilirubinemia, indicating obstructive jaundice. Computerized tomography of the abdomen revealed a mass in the head of the pancreas, dilated common bile duct, and dilated pancreatic duct. Endoscopic retrograde cholangiopancreatography and endoscopic ultrasound showed a large hypoechoic mass in the head of the pancreas causing extrahepatic biliary obstruction and pancreatic ductal dilation. The patient underwent a successful partial pancreatico-duodenectomy and cholecystectomy. She received no additional therapy after surgery, and liver function tests were normalized within nine days after surgery. Currently, surgical resection is the recommended first line treatment. The patient will be followed for any recurrence.

Core tip: Desmoid type fibromatosis (DTF) is a rare, locally invasive, non-metastasizing soft tissue tumor. We report an extremely rare case of DTF in the pancreatic head with an unusual etiology. This case study is valuable for the understanding of the diagnosis and treatment of DTF of the pancreatic head.

Desmoid type fibromatosis (DTF), also known as a desmoid tumor, deep fibromatosis, or aggressive fibromatosis, is a rare, locally invasive, non-metastasizing soft tissue tumor with a high potential for recurrence after resection. It accounts for 3% of all soft tissue tumors[1]. While the etiology is still unknown, it can arise sporadically at any anatomical site throughout the body[2]. DTF is categorized by location as extra-abdominal, abdominal wall, and intra-abdominal.

Intra-abdominal DTF is associated with sites of previous trauma, scarring, or irradiation[3]. An association occurs in patients with familial adenomatous polyposis (FAP) and Gardner syndrome, showing 7.5% of patients with DTF to have FAP[4]. To our knowledge, sporadic intra-abdominal DTF cases are very uncommon with only 10 cases having been previously reported, and cases of pancreatic origin being even more uncommon[1,3,5-11].

Here, we report the case of a 54-year-old female patient presenting with obstructive jaundice due to a sporadic DTF, located at the pancreatic head. The patient underwent a successful Whipple procedure and will be followed for any possible recurrence.

A 54-year-old female presented to the emergency department with intermittent dysphagia and a 60-pound weight loss within a 3-mo period. The patient denied any complaints of nausea or vomiting. Computerized tomography (CT) (Figure 1) of the abdomen revealed a mass in the head of the pancreas, a dilated common bile duct, and a dilated pancreatic duct. Her past surgical history included a total hysterectomy and bilateral tubal ligation. There was no family history to suggest a genetic hereditary disease. Laboratory tests showed mild elevation of transaminases, significant elevation of alkaline phosphatase and direct hyperbilirubinemia, indicating obstructive jaundice. Carbohydrate antigen 19-9 was elevated (380 IU/mL) and carcinoembryonic antigen was unremarkable. Endoscopic retrograde cholangiopancreatography (ERCP) showed a large 2.5 cm irregular, ill-defined mass at the head of the pancreas causing complete bile and pancreatic duct obstruction. Endoscopic ultrasound (EUS) (Figure 2) showed a 2.5 cm × 2.2 cm hypoechoic mass in the head of the pancreas causing extrahepatic biliary obstruction and pancreatic ductal dilation. Marked edematous and inflammatory changes were noted around this area. A fine needle aspiration of the pancreatic mass showed predominantly fibrotic, bland spindle cells with scattered normal skeletal muscle components. Immunohistochemical stains for CD117, CD34, and Pancytokeratin were negative. No pancreatic epithelial elements or significant inflammatory infiltrates were noted. Surgery was recommended on the suspicion of a reactive fibroinflammatory pseudotumor. However, surgery was deferred due to underlying pancreatitis. 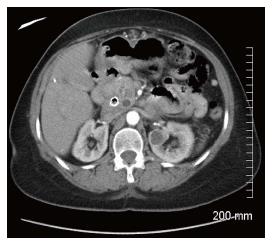 Figure 1 Computerized of the abdomen: Mass in head of pancreas, a dilated common bile duct with a metallic stent in place and a dilated pancreatic duct. 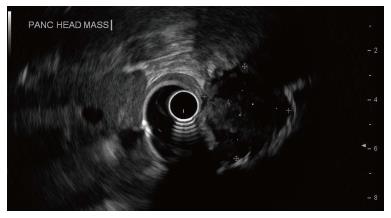 Two months after the emergency department admission, she underwent a new abdominal CT scan, which showed an enlarging of 5.2 cm × 4.2 cm in the pancreatic head. This had not changed significantly on a repeat CT scan after seven weeks. A repeat EUS guided fine needle aspiration was performed due to high suspicion of malignancy. Cytological examination was again negative for epithelial malignancy. Four months after initial presentation, the patient underwent a Whipple procedure with end-to-end pancreaticojejunostomy, cholecystectomy, an end-to-side choledochojejunostomy, a wedge liver biopsy of segment 3, a biopsy of the superior pancreatic lymph node, and a retrocolic end-to-end gastrojejunostomy. The procedure was successful, and a feeding jejunal tube was placed. On pathologic microscopic examination, the surgical margins of the liver and lymph node biopsies were negative for a tumor. The pancreatic head lesion showed typical features of DTF. A poorly circumscribed uniform fascicular spindle cell proliferation infiltrates the pancreatic parenchyma among remnants of normal pancreatic epithelial structures (Figure 3). The spindled myofibroblasts exhibit low cellularity and bland cytology (no atypia, no mitosis) with scattered keloid-like collagen and minimal inflammation within a collagenous stroma (Figure 4). Immunohistochemistry demonstrated positive Vimentin (mesenchymal marker) and Actin (focal, patchy, myofibroblast marker). Markers for myogenic cells (Desmin), stromal cells (CD117, CD34), neural cells (S-100) and epithelial cells (Pancytokeratin) were all negative. An initial pathologic impression of inflammatory myofibroblastic tumor was made after an additional immunohistochemical stain for ALK-1 was interpreted as showing “staining of spindle cells within the lesion”. However, further consultative review (Gerardo G Vergara) disclosed histologic features more consistent with DTF and the ALK-1 immunostain (faint, patchy staining of spindle cells) was essentially negative. An additional immunostain for Beta-catenin was diffusely nuclear positive (Figure 5), supportive and diagnostic of DTF. 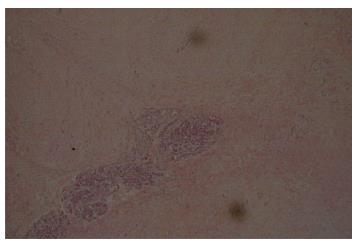 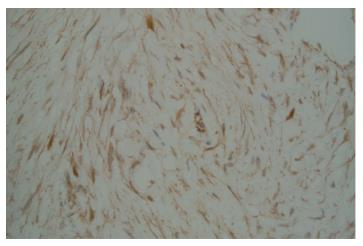 Recognizing and distinguishing between these lesions are clinically important due to different prognostic and treatment implications, which is key in our case. The patient received no additional therapy after surgery. The patient’s liver function tests normalized within nine days after surgery.

DTF is a rare mesenchymal neoplasm that develops from muscle connective tissue, fasciae, and aponeuroses[12]. Although it is benign, it can be life threatening due to aggressive local invasion, which can result in adverse events through compression and/or obstruction of the digestive system, urinary system, or blood vessels. While the etiology of DTF is unknown, identified risk factors include surgical scars, FAP, and high-estrogen states[13]. And although intra-abdominal DTF is rare, DTF of the pancreas is even rarer, with only 10 cases being reported[1,3,5-11]. Of these 10 reported cases, DTF was located in the pancreatic head in only two cases[3,7].

A confirmed diagnosis of sporadic intra-abdominal DTF is not very probable to be reached before surgery. It is very difficult to diagnose DTF symptomatically. Patients are often asymptomatic or have non-specific symptoms such as weight loss or epigastric pain[4]. Symptoms depend on the location and extent. Painless jaundice, a classic manifestation of pancreatic head cancer, is rarely seen in patients with pancreatic head DTF, as it usually does not obstruct the common bile duct[8]. However, in our case, the patient had painless jaundice due to the obstruction of the common bile duct.

Histologically, differentiation of DTF from other soft tissue neoplasms can sometimes be challenging, particularly when it occurs in an uncommon site (in our case, the pancreas) or with a low index of suspicion. DTF typically consists of spindle cells and fibroblasts with a low mitotic rate[17]. However, reaching a confirmed diagnosis is still unlikely until surgery is performed with total tumor removal, as in the case of an inflammatory pseudotumor. Immunohistochemistry against specific cell markers in the differential diagnosis of pancreatic DTF is useful, supportive and diagnostic. Positive staining for Vimentin and Actin are indicative of mesenchymal cells and myofibroblasts, respectively, while positive staining for beta-catenin helps distinguish DTF from other fibroblastic and myofibroblastic lesions[18]. In 80%-90% of sporadic cases, somatic mutations of adenomatous polyposis coli (APC) gene and activating mutations in CTNNB1 (beta-catenin gene) usually result in the accumulation of beta-catenin. This accumulation triggers fibroblastic proliferation[19]. This was relevant in our case, as the initial diagnosis was inflammatory myofibroblastic tumor was later changed to DTF.

The mainstay treatment for DTF is surgery with wide microscopic resection of the margins[20]. However, there is a very high chance of local recurrence with surgical resection. Long-term prognosis is currently unknown. Recurrence of pancreatic DTF has not been seen except in one patient with FAP[9]. In the current case, the patient will be followed for any possible recurrence and possible work up for FAP.

In conclusion, sporadic DTF of the pancreas is extremely rare. Although it is benign, it is locally aggressive and can be life threatening. Since it can be asymptomatic or present with non-specific symptoms, diagnosis can be difficult clinically or by imaging studies and requires adequate tissue sample, high index of suspicion, and recognition of typical histopathology and immunohistochemistry. Distinguishing this lesion from other lesions is clinically significant, both for prognosis and treatment decision-making. First line treatment is surgical resection. As there is a high chance of local recurrence and an unknown long-term prognosis, follow-up is necessary.

A 54-year-old female presenting with intermittent dysphagia and a 60-pound weight loss within a 3-mo period.

Successful surgical resection with no complicaitons.

Sporadic DTF of the pancreas is extremely rare.

Although DTF of the pancreas is benign, it is locally aggressive and can be life threatening. As there is a high chance of local recurrence and an unknown long-term prognosis, follow-up is necessary.

This manuscript was reported about a rare case of DTF at the pancreatic head.