A 66-year-old man was diagnosed with a gastric submucosal tumor. Endoscopic ultrasound (EUS) revealed an iso/hypoechoic mass in the third layer. No malignant cells were detected in a histological examination. Yearly follow-up endoscopy and EUS showed the slow growth of the tumor. Endoscopic submucosal dissection (ESD) was performed and a glistening tumor was resected. The lesion showed a multinodular plexiform growth pattern consisting of spindle cells with an abundant fibromyxoid stroma that was rich in small vessels. The tumor was diagnosed as plexiform fibromyxoma (PF) by immunohistochemistry. Although difficulties are associated with reaching a diagnosis preoperatively, chronological changes on EUS may contribute to the diagnosis of PF. ESD may also be useful in the diagnosis and treatment of PF.

Core tip: Plexiform fibromyxoma (PF) is a very rare gastric submucosal tumor. Therefore, difficulties are associated with diagnosing PF preoperatively, particularly in a differential diagnosis of gastrointestinal stromal tumors with cystic changes. We suggest that the chronological changes observed by endoscopic ultrasound contribute to the preoperative diagnosis of PF. Furthermore, endoscopic submucosal dissection needs to be considered for the diagnostic treatment of PF without muscle invasion.

A 66-year-old man was referred to our institute for the management of a gastric tumor. An endoscopic examination revealed a SMT, approximately 20 mm in diameter, located in the antrum (Figure 1A). EUS showed an iso/hypoechoic mass in the third layer (Figure 1B). Computed tomography (CT) displayed a poorly enhanced lesion (Figure 2). Endoscopic biopsy and endoscopic ultrasound-guided fine-needle aspiration (EUS-FNA) were performed. Histological findings showed no malignant cells, and no further diagnosis was made. 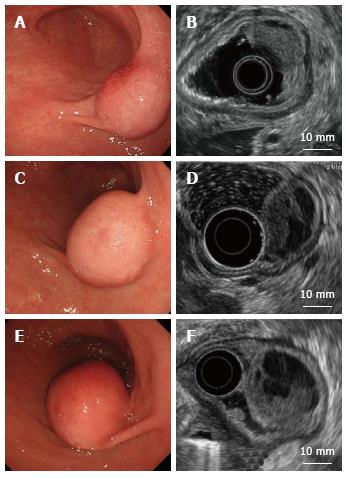 Figure 1 Endoscopic and endoscopic ultrasound findings. A: A submucosal tumor covered with a normal mucosa; B: An iso/hypoechoic mass with cystic components in the third layer; C, D: One year later; E, F: Four years later. The tumor increased in size and became pedunculated. Solid and multicystic parts both grew larger without muscle invasion. 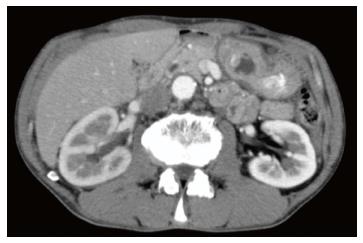 Yearly follow-up endoscopy revealed the slow growth of the tumor, which became pedunculated and showed transpyloric prolapse (Figures 1C-F). EUS revealed gradual increases in the solid and multicystic components without muscle invasion. Based on these findings, our preoperative diagnosis was a hamartomatous inverted polyp[4-6]. In order to avoid outlet obstruction and reach a histological diagnosis, ESD was performed (Figure 3). 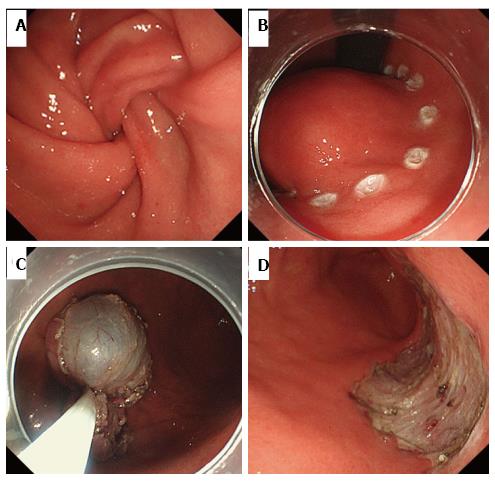 On dissection, a glistening, 40 mm × 30 mm tumor covered with normal gastric mucosa was identified. Microscopically, the lesion showed a multinodular plexiform growth pattern, and consisted of bland spindle cells separated by abundant intercellular myxoid or fibromyxoid matrix. The stroma was rich in small vessels (Figure 4). Immunohistochemical tests revealed that tumor cells were focally positive for smooth muscle actin (SMA), muscle-specific actin (HHF35), and calponin, but were negative for c-kit, CD34, DOG-1, desmin, the S-100 protein, CD10, and h-caldesmon. The Ki-67 labeling index was approximately 2% (Figure 5). The pathological assessment led to a diagnosis of PF. Resected margins were histologically tumor-free. Although vascular invasion was positive, the patient did not undergo surgery due to the reportedly good prognosis of PF[1,7], and remained under careful observation by endoscopy and CT follow-up. There was no recurrence or metastasis in the 12-mo follow-up. 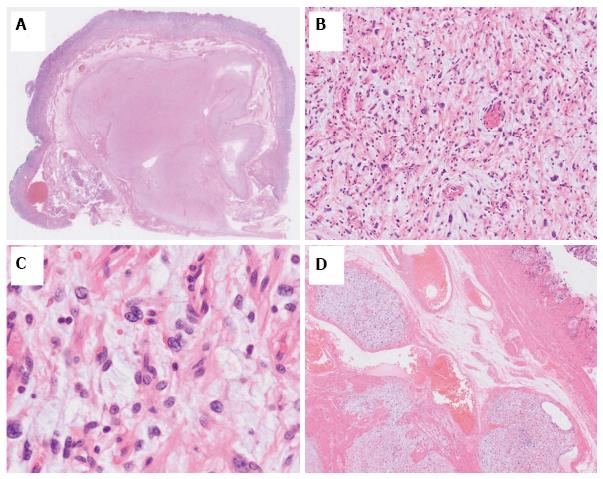 Figure 4 Histological appearance of the tumor. The margins were histologically tumor-free. A: The tumor showed a plexiform growth pattern; B, C: The tumor consisted of spindle-shaped cells with an abundant myxoid or fibromyxoid stroma; D: Some tumor cells intruded into the vessel space.

Gastric PF is a new benign mesenchymal tumor that has been adopted by the 2010 WHO classification of tumors of digestive system[8]. The term PAMT is also used for this type of tumor. The distinction between these terms has been controversial[7,9]. Previous studies reported that most cases of this tumor are found in the antrum, with approximately half extending into the extragastric soft tissues or proximal duodenum[2,7]. The diagnosis of PF is based on its histological features, including immunohistochemical findings[1]. Its histology indicates a plexiform growth pattern composed of spindle cells, fine small vessels, and a myxoid matrix. Tumor cells are typically immunoreactive for SMA and HHF35, whereas c-kit, CD34, DOG-1, and the S-100 protein are nearly completely negative. Focal immunoreactivity for CD10, caldesmon, or desmin has occasionally been detected[1,3,7].

In the present case, endoscopy and EUS showed that the tumor grew gradually, with increases in the solid and multicystic components. Spindle cells, with a rich vascular myxoid stroma, were considered to be detected as an isoechoic lesion and fluid leakage was observed as a hypoechoic lesion.

Previous studies reported the lack of recurrence or metastasis of PF after excision[1,7]; however, Miettinen et al[1] demonstrated that some plexiform elements showed intravascular involvement, suggesting that PF occasionally spreads through vessels. Since our case also exhibited vascular invasion, follow-up examinations were carefully performed. Since no patients have developed recurrence, annual endoscopy and CT are considered to be sufficient to monitor patients.

Although PF is considered to be benign, distal or partial gastrectomy is generally performed under the assumption of the presence of GIST[7]. Although GIST typically appears as a solid mass, few studies have described myxoid GIST that also shows a plexiform growth pattern[10], and some cases of GIST have shown cystic changes as a result of degeneration or necrosis[11-13]. Thus, it may be difficult to distinguish PF from these GIST by performing EUS only once. The chronological changes observed in the present case may contribute to a preoperative diagnosis of PF and the elucidation of its growth process. In this case, even though contrast-enhanced EUS was not performed, it may also be useful for reaching a differential diagnosis[14,15]. The distinction of PF from a hamartomatous inverted polyp is also important. EUS-FNA is the first choice for a definite diagnosis of SMT[16]. Nevertheless, ESD remains an important option for diagnostic treatment, including that for cases of gastric SMT of the submucosal layer[6,17]. Since EUS-FNA revealed no abnormalities in the present case, ESD was selected as a second choice. We performed en bloc ESD, which allowed for the diagnosis of PF. To the best of our knowledge, this is the first case report to describe the successful resection of PF by ESD. Further studies are needed in order to establish the appropriateness of ESD for PF.

A 66-year-old man presented with a gastric tumor located in the antrum.

Endoscopic ultrasound revealed an iso/hypoechoic mass of 20 mm in diameter in the third layer, and it showed gradual increases in the solid and multicystic components without muscle invasion.

Endoscopic submucosal dissection was performed as a diagnostic treatment.

The rarity of the case could be enriched with a brief review of the literature, due to the scarce number of papers reporting similar tumors. Moreover it could be interesting to expand data about EUS, for example explaining the characteristics of elastometry and eventual contrast enhancement. The quality of the article is augmented by the images, which are impressive and clear. Overall it is a good paper.