A 51-year-old male patient was referred to our hospital because of an incidentally detected cystic mass near the common bile duct (CBD). Imaging studies demonstrated a cystic mass that was suspected to communicate with the CBD. Gastroscopy showed irregular mucosal thickening with hyperemic change in the second portion of the duodenum. A type II choledochal cyst combined with duodenal malignancy was suspected. The patient underwent surgical resection and the histological diagnosis was mucinous adenocarcinoma of the duodenum with cystic metastasis. Although its incidence is extremely rare, care should be taken to check for other sites of malignancy when a pericholedochal cystic mass is detected.

A 51-year-old male patient visited a local hospital because of dyspepsia and epigastric pain. Ultrasonography revealed a 4.5 cm sized cystic mass near the CBD and pancreatic head (Figure 1A). He was transferred to our hospital for further evaluation of the cystic mass. His medical history and laboratory findings were unremarkable. Tumor markers such as alpha-fetoprotein, carcinoembryonic antigen, and carbohydrate antigen 19-9 were within normal limits. Contrast-enhanced abdominal computed tomography (CT) showed a homogeneous low-density cystic mass with thin, smooth walls next to the CBD, and there were suspicions of a communication between the two structures (Figure 1B). Under the impression that the lesion was a type II choledochal cyst, which is a discrete diverticulum of the extrahepatic bile duct, magnetic resonance (MR) imaging and endoscopic ultrasound (EUS) were done. The cystic mass showed low signal intensity on the T1-weighted MR image and high SI on the T2-weighted MR image with nearly imperceptible walls and there was no evidence of an enhancing solid portion in the cyst (Figure 1C). EUS also revealed a 4.5 cm sized cystic mass which seemed to be connected with the CBD, and gastroscopy showed irregular mucosal thickening with hyperemic change in the second portion of the duodenum (Figure 1D). Based on these findings, the patient underwent Whipple’s operation under the impression the lesion was a type II choledochal cyst with extrinsic compression of the duodenum, and the possibility of combined duodenal malignancy due to the mucosal lesion in the duodenum. An examination of the resected specimen revealed a duodenal cancer in the second portion of the duodenum 2.5 cm proximal to the ampulla of Vater, and the cystic mass did not show communication with the CBD (Figure 2A and B). The histological diagnosis was mucinous adenocarcinoma of the duodenum with cystic metastasis and subpyloric lymph node metastasis (Figure 2C and D). The postoperative course of the patient was uneventful. The patient was disease-free 12 mo after the initial diagnosis. However, the patient died 18 mo after the recurrence. 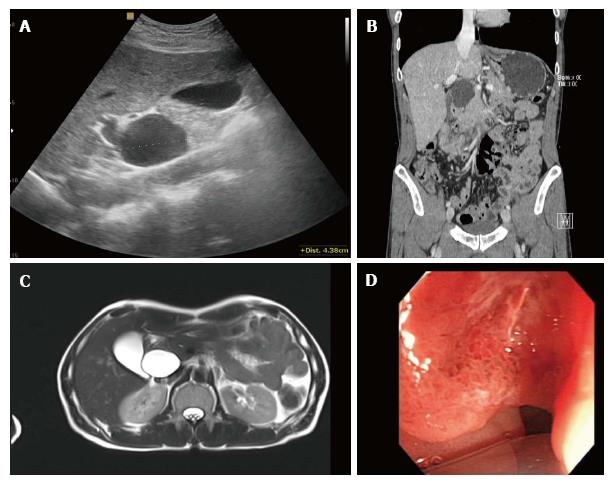 Figure 1 Evaluation of clinical findings. A: Ultrasonography of upper abdomen shows a 4.5 cm sized anechoic cystic mass adjacent to the head of the pancreas and common bile duct; B: Coronal multiplanar reformatted image of contrast-enhanced abdominal computed tomograph shows a homogeneous low-density cystic mass with thin, smooth walls abutting the common bile duct, with possible communication between the two structures; C: Axial T2-weighted magnetic resonance image demonstrates the cystic mass as a homogeneously high signal intensity lesion with thin walls, and there was no evidence of mural nodularity in the cystic mass; D: Endoscopic image of the duodenum shows irregular mucosal thickening with hyperemic change in the second portion of the duodenum. 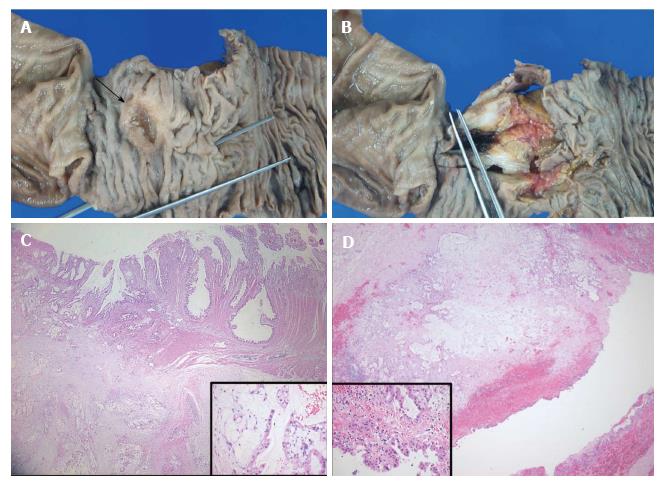 Figure 2 Gross specimen and pathological findings. A: The ulcerofungating mass measuring 2.4 cm × 2.0 cm (arrow), 2.5 cm distant from the ampulla of vater, is observed in the duodenum; B: The cut surface reveals a grey-white mass that abuts the head of the pancreas; C: Histologically, the duodenal mass proved to be an infiltrative adenocarcinoma with subserosal invasion, note the abundant extracellular mucin with floating neoplastic epithelium (Inset); D: Photomicrograph of the cystic mass shows invasive tumor cells in the lining of the cyst and the surrounding soft tissue which is a definite malignant feature (Inset).
DISCUSSION

We initially suspected a type II choledochal cyst combined with duodenal malignancy due to the mucosal lesion in the duodenum and the gastroscopic biopsy revealed a moderate degree of dysplasia. All of the imaging studies showed a well-marginated, homogeneously thin-walled cyst adjacent to the CBD which is regarded as a diverticulum of the extrahepatic bile duct, and the duodenal lesion was invisible. Since surgical resection is generally considered for the treatment of choledochal cysts, the patient underwent Whipple’s operation, and the patient was confirmed to have mucinous adenocarcinoma of the duodenum with cystic metastasis and subpyloric lymph node metastasis.

Mucinous adenocarcinoma is one of the histologic subtypes of carcinoma and is very rare in the duodenum. A recent study from South Korea by Chang et al[3]. revealed that 54.8% of small intestinal carcinomas were located in the duodenum and 4.6% were mucinous adenocarcinoma. Due to its rarity, to the best of our knowledge, this is the first case report of primary mucinous adenocarcinoma of duodenum with cystic metastasis. Although there are several studies in the literature describing the imaging findings of small bowel carcinoma including duodenal carcinoma[3-6], there are no previous reports reporting the imaging findings of mucinous adenocarcinoma of the duodenum. According to previous studies, duodenal cancer typically appears as an irregular thickening of the duodenal wall with regional lymph node enlargement on CT. Since the duodenal lesion of our patient was flat and small (2.0 cm), the primary lesion in the second portion of the duodenum and metastatic lymph node in the subpyloric area were missed on initial imaging studies including CT and magnetic resonance imaging (MRI). In a retrospective review of CT and MRI, the metastatic lymph node in the subpyloric area was identified. However, the primary lesion was invisible.

Choledochal cysts are a rare congenital anomaly of the intrahepatic or extrahepatic biliary tree and is known to occur in 1 in 100000 to 1 in 150000 live births[7]. Choledochal cysts occur more frequently in Asian populations, with more than two-thirds of all reported cases originating in Asia. Traditionally, choledochal cysts presented predominantly in young age with the triad of abdominal pain, palpable right upper quadrant mass, and intermittent jaundice. Nonetheless, recent analyses show increasing numbers of adults presenting with choledochal cysts[8]. According to Todani’s classification, choledochal cyst can be divided into 5 types: Type I, a cystic or fusiform dilatation of the CBD, which is subdivided into saccular, segmental, and diffuse types; type II, a diverticulum arising from the CBD; type III, choledochocele or a bulbous dilation of the terminal CBD within the ampulla of Vater; type IV, multiple intrahepatic and extrahepatic cysts; and type V, intrahepatic bile duct cysts or Caroli disease[9]. Among them, type II cysts are the most rare form of choledochal cysts, usually making up less than 2%-5% of cases[10]. They usually manifest as a pericholedochal cystic mass, of various shapes, some being gallbladder-like, and others being diverticulum-like. Choledochal cysts have been associated with an approximately 20 to 50-fold increase in biliary malignancies when compared with the general population[11]. The risk of malignancy in type II choledochal cysts has been estimated to range from 7%-9%, which is a slightly lower than the risk for other types of choledochal cysts (14.3% in the third decade)[12]. Current recommendations for management of choledochal cysts is surgical resection regardless of cyst type, including hepaticojejunostomy, Whipple procedure, partial liver resection, or liver transplantation[13].

In conclusion, we have described the first case of a mucinous adenocarcinoma of the duodenum with cystic metastasis. Even though the incidence of this particular type of cancer is extremely low, careful evaluation with a high suspicion for other sites of malignancy must be done when a pericholedochal cystic mass is detected incidentally.

A 51-year-old male patient was admitted because of incidentally detected cystic mass near the common bile duct (CBD).

About 4.5 cm sized cystic mass near the CBD, with irregular mucosal thickening in the second portion of the duodenum.

Laboratory findings were unremarkable, including tumor markers such as alpha-fetoprotein, carcinoembryonic antigen, and carbohydrate antigen 19-9.

Findings from gastroscopy, ultrasonography, computed tomograph, and magnetic resonance imaging led to a diagnosis of type II choledochal cyst with extrinsic compression of the duodenum, and the possibility of combined duodenal malignancy.

Mucinous adenocarcinoma of the duodenum with cystic metastasis and subpyloric lymph node metastasis.

Although rare, careful evaluation with a high suspicion for other sites of malignancy is needed when a pericholedochal cystic mass is detected.