We reviewed 232 consecutive patients with early gastric cancer who underwent ESDCC between June 2010 and February 2014 at Aso Iizuka Hospital. We divided patients into two groups according to age: Older patients (> 80 years, n = 64) and non-older patients (≤ 80 years, n = 168). We retrospectively compared the prevalence rates of pre-existing comorbidities, anticoagulant therapy, en bloc resection, mean duration of hospitalization, incidence of ESDCC-related complications, change in performance status (PS) before and after ESDCC, and financial cost of admission.

ESDCC has a good clinical outcome in older patients.

In an increasingly older society, a growing number of endoscopic treatments are being performed in patients with age-associated comorbidities[1]. Endoscopic submucosal dissection (ESD) for early gastric cancer (EGC) has become widely accepted, as it provides en bloc resection and histologically complete resection, and it is less invasive than surgical resection[2-5]. ESD recently been reported to be a safe and reliable procedure for treating early gastrointestinal tract cancer in older patients[6-10]. However, there is little information on the medical costs of ESD, the mean duration of hospitalization, and the change in performance status (PS) before and after ESD. Akahoshi and Fujifilm[11] developed a grasping-type scissors forceps [i.e., the “Clutch Cutter” (CC), Fujifilm, Tokyo, Japan, Figure 1] for safe ESD. We previously showed that ESD using the CC (ESDCC) is a safe and effective method for treating patients with early cancer in the esophagus, stomach, duodenum, or colorectum[11-17]. However, no reports have described the clinical outcomes of ESDCC for older patients with EGC. The present study evaluated the clinical outcomes of ESDCC for older patients with EGC, including the medical economics associated with ESDCC.

ESDCC was performed in 269 consecutive patients with EGC between June 2010 and February 2014 at Aso Iizuka Hospital. A total of 37 patients were excluded because their post-ESD histological analysis did not meet the clinical indication criteria for ESD proposed by Gotoda et al[18] and the Japanese Gastric Cancer Association[19] (i.e., listed in the exclusion criteria group). A total of 232 consecutive patients with EGC were enrolled in this retrospective study.

ESD with the Clutch Cutter procedure

Detailed technical procedures of ESDCC have been reported previously[11-17] (Figure 2). ESDCC was conducted using a single-channel therapeutic endoscope (EG-450RD5; Fujifilm) or a two-channel multi-bending endoscope (GIF-2T240M; Olympus, Tokyo, Japan). A long, transparent hood (F-01; Top Co. Ltd., Tokyo, Japan) was attached to the tip of the endoscope to facilitate submucosal dissection by elevating the lesion. Circumferential markings were made using the CC in closed mode. A hyaluronic acid solution (MucoUp; Johnson and Johnson, Tokyo, Japan) with diluted epinephrine (0.0002%) and indigo carmine (0.0002%) was injected into the submucosal layer to lift up the lesion. The target mucosal and submucosal layer tissues were grasped, lifted up, and cut using the CC. Finally, the lesion was completely resected using the CC (Figure 3). When bleeding occurred during the procedure, it was treated via coagulation with the CC. The forced coagulation mode (VIO 300D; Erbe, Tübingen, Germany) 30 W (effect 3) was used for marking, the endo cut Q mode (effect 2, duration 3, interval 1) was used for cutting, and the soft coagulation mode 100 W (effect 5) was used for hemostatic treatment. 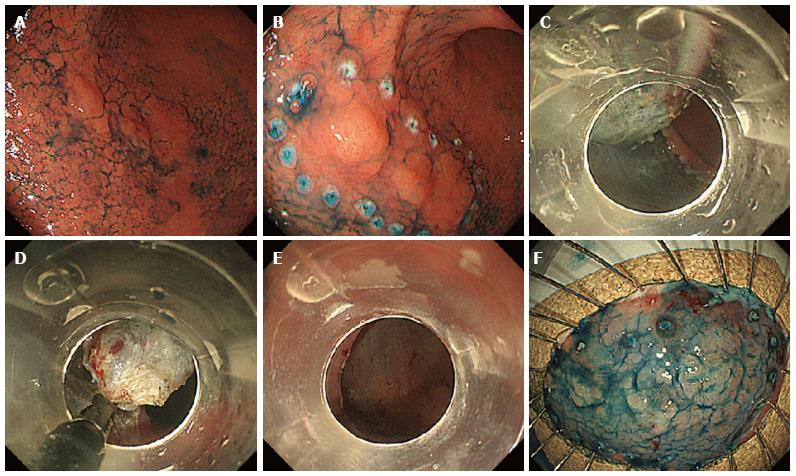 Figure 3 Endoscopic submucosal dissection using the Clutch Cutter in an 82-year-old Japanese male. A: Indigo carmine was sprayed to demarcate the lesion; B: Markings outside the lesion; C and D: The submucosal tissue under the lesion was gradually grasped and dissected from the muscle layer; E: The lesion was completely cut from the muscle layer; F: Fixation of the specimen.
Statistical analysis

No significant between-group differences were found regarding the macroscopic type, tumor size, histological type, and ESD indication categories (Table 2). However, the proportion of upper lesions was significantly higher in the older group (43.8%) than in the non-older group (23.2%) (P = 0.0042).

The R0 resection rate in the non-older group was significantly higher than that in the older group (100% vs 95.3%, P = 0.02, Table 3). However, the R0 resection rate was greater than 95% in both groups. The postoperative bleeding rates of the older and non-older groups were 1.6% (1/64) and 4.8% (8/168), respectively. Perforation occurred in only one (1.6%) patient in the older group; endoscopic clipping was performed in this patient and the perforation was cured. There was no significant difference between the two groups in the rate of ESDCC-related complications.

Three patients in the older group and one patient in the non-older group showed a worse PS after ESD, but there was no significant difference between groups in the prevalence of a worse PS after ESD. The mean duration of hospitalization in the older and non-older groups was 11.4 and 10.7 d, respectively. The mean financial costs of admission for the older and non-older groups were 657040 JPY and 574890 JPY, respectively. There were no significant differences between the two groups in duration of hospitalization or admission costs (Table 4).

According to the 2014 fiscal statistics published by the Ministry of Health, Labour and Welfare, the life expectancies of men and women are 80.5 years old and 86.8 years old, respectively[20]. The natural history of EGC is unclear. However, a long life expectancy and an aging population will inevitably lead to an increased number of older patients with EGC in Japan. Long-term outcomes suggest that implementation of ESD for older patients with a satisfactory PS will increase life expectancy[21]. Therefore, we investigated the clinical outcomes associated with older patients who received ESDCC for EGC, including economic and social aspects.

No significant between-group differences were observed regarding macroscopic type, tumor size, histological type, and ESD indication categories. ESD was performed on the lesions of these patients, similar to a previous report[8]. In our study, the proportion of upper lesions was significantly higher in the older group than in the non-older group. Furthermore, the R0 resection rate in the non-older group was significantly higher than that in the older group. The tumor location likely affects the difficulty of the ESD procedure, and so the greater number of upper lesions in older patients might have affected the technical outcomes.

The current study did not show a significant difference between older and non-older patients in the rate of ESDCC-related complications (i.e., postoperative bleeding and perforation). The reported perforation and bleeding rates of ESD using a knife device range from 1.2% to 8.2% and from 5.3% to 15.6%, respectively[23-30]. Our complication rate was low compared with that reported in previous studies that used conventional knives[23-30]. Inevitable risk factors associated with knife devices for ESD-related complications include defects of fixation (inaccurate targeting) and compression (hemostatic effect), as well as pushing the knife into the target tissue (where the pushing force is in the direction of the muscle layer) with an electric discharge[14]. The CC can accurately grasp target tissue and can be energized or incised while separated from the muscular layer, thus greatly reducing the risks. There was no uncontrollable intraoperative bleeding in our previous reports on ESD[11-17]. We were able to quickly and easily stop intraoperative bleeding using the CC[15] without changing the device for the entire gastrointestinal tract. In the present study, we did not perform any unexpected incisions. Therefore, the CC has the potential to decrease the risk of ESD-related complications in older and non-older patients.

Few medical economic outcomes have been reported in older patients. Murata et al[31] reported that mean medical costs are significantly higher for older patients undergoing ESD for EGC than for non-older patients. They also reported that chronic comorbid conditions or the use of anticoagulant drugs, as well as the occurrence of complications, might be associated with an increase in the length of stay or medical costs during hospitalization[31]. Although the older group in our study showed a significantly higher rate of comorbid cardiovascular disease than did the non-older group, the postoperative bleeding rate was low in the older group (1.6%). In our series, there were no significant between-group differences in the length of stay and medical costs during hospitalization. The reported complication rate associated with ESDCC is lower than that of ESD using conventional knives[11-17], which might have affected our medical economic outcomes.

We conclude that ESDCC is safe and effective for older and non-older patients with EGC. This study is limited by its retrospective nature. A prospective study with a larger sample size is advised.

We thank Kelly Zammit, BVSc, for editing a draft of this manuscript. Kazuya Akahoshi and Hidefumi Akahane (Fujifilm) have applied for a patent in Europe for the CC described in this article. Japan, China, and the United States have already granted patents.

In an aging society, the opportunity to treat older patients with early gastric cancer (EGC) is increasing. However, there is little information on the medical costs of endoscopic submucosal dissection (ESD), the mean duration of hospitalization, and the change in performance status before and after ESD. It is important to assess the clinical outcomes of ESD using the Clutch Cutter (CC) (ESDCC) in older patients with EGC.

The authors previously showed that ESD using the CC (ESDCC) is a safe and effective method for treating patients with early cancer in the gastrointestinal tract. No reports have yet evaluated the efficacy and safety of ESDCC for older patients with EGC, including the economic and social aspects.

There was no significant difference between older patients and non-older patients in mean duration of hospitalization, incidence of ESDCC-related complications, change in PS before and after ESD, and financial cost of admission.

It may be economically and socially beneficial to reduce the complication rate by performing ESDCC for older patients with EGC.

The CC (DP2618DT, Fujifilm Corporation, Tokyo, Japan) was developed by Akahoshi. The CC is a grasping type of scissors/forceps that can grasp tissue pieces and cut or coagulate with an electrosurgical current. To facilitate tissue grasping, the CC has a serrated cutting edge with a width of 0.4 mm, and a length of 3.5 mm or 5 mm. The forceps diameter is 2.7 mm. The outside of the forceps is insulated so that electrosurgical current energy concentrates on the closure blade to avoid unintentional incision. Furthermore, the forceps can be rotated in any desired direction. The CC is disposable and cannot be reused. The CC can be used in all steps of ESD.

The authors present an interesting study on the efficacy and safety of endoscopic submucosal dissection for older patients with early gastric cancer. The study is well designed, the results are accurately noted and the discussion is concise.