CONCLUSION: These results indicate that tumor location did not affect the prognosis. Curative resection is important for improving the prognosis of patients with MGC.

Between 1987 and 2004, 3299 patients with gastric carcinoma were admitted to the Division of Gastroenterologic Surgery, Department of Surgery, Chonnam National University Medical School, Gwangju, South Korea. Of these, 919 (27.9%) had MGC. The clinicopathological features of the patients with MGC were reviewed retrospectively. Patients with carcinomas involving the entire stomach were excluded. Following the Japanese classification of gastric carcinoma outlined by the Japanese Research Society for Gastric Cancer[3], the location of each tumor was described as the proximal, middle, or distal third of the stomach. The following information about each patient was obtained from hospital records: Age, sex, tumor size, depth of invasion, histologic type, nodal involvement, extent of lymph node dissection, hepatic metastasis, peritoneal dissemination, stage at initial diagnosis, operative type, curability, and survival rate.

The survival rates of the patients were calculated using the Kaplan-Meier method, and the relative prognostic importance of the parameters was investigated using the Cox proportional hazards model. The χ2 test was used to evaluate the statistical significance of differences, and P values less than 0.05 were considered significant.

Of the 3299 patients diagnosed with gastric carcinoma who underwent surgery at our hospital over a 17-year period, 919 (27.9%) were diagnosed with MGC. Table 1 describes the clinicopathological features of these 919 patients and the 2312 patients with PGC/DGC. There was a significant difference in the mean age of the patients with MGC (55.8 years) compared to the patients with DGC (57.6 years) (P < 0.001). Of the 919 patients with MGC, 602 (65.5%) were male and 317 (34.5%) were female. There were more males than females in each group, but there was no significant difference in the sex ratio of each group. Carcinomas in the middle third of the stomach were smaller than were carcinomas in the proximal third of the stomach (4.2 cm vs 4.7 cm), and the difference in mean tumor size was significant (P < 0.001).

Hepatic metastases from MGC were found in 20 patients (2.2%), and peritoneal dissemination was present in 81 patients (8.8%). No significant differences were found in the frequency of hepatic metastasis or peritoneal dissemination among the groups. Of the patients with MGC, 396 (43.1%) were classified as either stage III or IV at the initial diagnosis. In MGC patients, 55.6% of the tumors extended to the serosa or adjacent organs (pT3 and pT4), while 72.5% of the PGCs extended beyond the serosa. 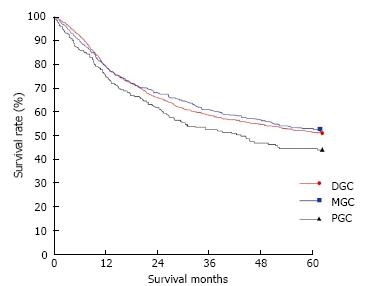 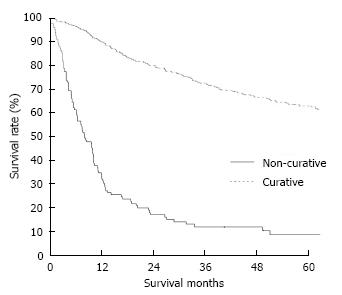 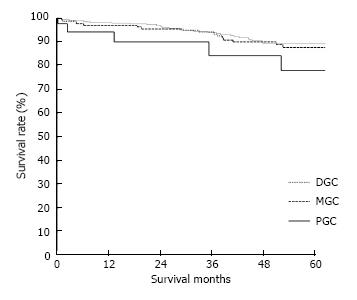 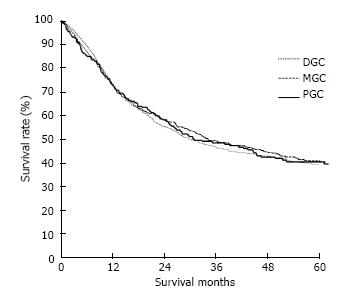 The prognosis of gastric carcinoma varies with tumor location[4-6]. Although MGCs are reported to have relatively better outcomes than carcinomas in other parts of the stomach[2], there is limited information on the prognostic factors for MGC. Therefore, we compared the clinicopathological features and prognosis of MGC patients with those of patients with PGC/DGC.

Investigators have discussed various prognostic factors for MGC. Serosal invasion, lymph node metastasis, and lymphatic involvement were found to have significant correlations with prognosis in univariate analyses, and serosal invasion and lymphatic involvement were independent prognostic factors in a multivariate analysis[7]. Other authors have reported similar findings[8,9]. An anterior location was clearly an independent prognostic factor for patients with MGC based on a multivariate analysis. It has been postulated that tumors in the anterior wall metastasize more easily to the peritoneum compared with tumors elsewhere because there are no organs on the abdominal side of the anterior wall[5]. This explanation seems reasonable, although others do not agree[7]. In this study, we found that age, tumor size, serosal invasion, lymph node metastasis, and curability were independent predictors of survival in patients with MGC in a multivariate analysis.

The operation type for patients with MGC is controversial. One prospective randomized trial conducted in Italy stated that distal gastrectomy was sufficient for treating tumors located in the middle third of the stomach if a cancer-free microscopic margin could be achieved[10]. However, that study included a relatively small number of MGCs. Therefore, many surgeons still recommend total gastrectomy for MGC because they are concerned about the possibility of local recurrence due to the short proximal resection margin and less extensive lymph node dissection in distal gastrectomy[11,12]. In a separate report, distal gastrectomy was performed in only 39.3% of patients with a middle third advanced gastric carcinoma for the same reasons, although the authors stated that the type of gastric resection and length of the proximal resection margin did not affect the long-term prognosis. They also reported that distal gastrectomy was sufficient to achieve a tumor-free resection margin in many cases[13]. Other authors have reported that if curative surgery can be performed, the long-term prognosis of patients with MGC is not affected by the extent of gastric resection, and a distal gastrectomy is feasible[14-16]. When determining the type of operation for MGC, we also stress tumor-free resection. The statistical analysis in this study showed that operation type was not a prognostic factor.

The prognosis of gastric carcinoma varies with tumor location. Although MGCs are reported to have relatively better outcomes than carcinomas in other parts of the stomach, there is limited information on the prognostic factors for MGC.

The study shows the importance of curative resection in patients with MGC.

The stomach is anatomically divided into three portions: The upper (U), middle (M), and lower (L) parts. If more than one portion is involved, all involved portions should be described in order of degree of involvement, the first indicating the portion in which the bulk of the tumor is situated.

These authors provided an overall review of the middle third gastric cancer. These authors described several clinico pathological parameters of MGC compared to PGC/DGC. In this article, authors also demonstrated the significant difference between curative resection is one of the prognostic factors for MGC. It is interesting and acceptable for publication.