METHODS: We retrospectively analyzed 101 PDAC patients who underwent surgical resection at the Samsung Medical Center between January 2000 and December 2004. Forty one patients with LM were analyzed for the time of metastasis, prognostic factors affecting LM, and survival.

Pancreatic cancer is the fourth leading cause of death from cancer in the United States, 2006 and the fifth in South Korea[1,2]. Anatomical features including retroperitoneal location with proximity to the portal vein, celiac trunk, and superior mesenteric artery are associated with aggressive behavior of pancreatic ductal adenocarcinoma (PDAC). In many cases, patients present with PDAC which is already at an advanced stage at the time of diagnosis and unresectable. Pancreatectomy offers the only chance for long-term survival and is the single most important factor affecting patient outcome[3,4]. Even after curative radical surgery, the recurrence rate of PDAC is very high and high-volume centers report 5-year survival rates of only 10%-20%[3,5-7]. Postoperative adjuvant therapy, with the purpose of reducing hepatic metastasis and local recurrence, can influence survival gain[5]. Post-operative recurrence is categorized mainly by liver metastasis (LM), peripancreatic or retroperitoneal recurrence, peritoneal seeding, and distant other organ metastasis. In this study, we analyzed LM after resection for PDAC.

Between January 2000 and December 2004, 106 patients with PDAC underwent pancreatic resection with curative intent in the Department of Surgery, Samsung Medical Center, Seoul. Excluding for five patients who dropped out, 101 patients were enrolled. The clinical features 41 patients with LM and 60 patients without LM were compared. The average age was 58.6 years (range, 31-79 years) and the median follow-up period was 15.5 ± 17.4 mo (range, 3.3-81.4 mo). Before surgery, we evaluated the radiological tumor status using abdominal computed tomography (CT) with or without magnetic resonance imaging, but we did not performed positron emission tomography scans routinely.

Patients with cancer in the head, neck and uncinate process of the pancreas underwent pancraticoduodenectomy or pylorus-preserving pancreaticoduodenectomy (n = 70), and patients with cancer in the body or tail underwent distal pancreatectomy (n = 19). Total pancreatectomy was performed in twelve patients with severe pancreatitis combined with cancer or with tumors extending beyond the neck of the pancreas, delineated by the left border of the superior mesenteric vessels and into the body of the gland. Peripancreatic lymph nodes, hepatoduodenal nodes as well as the celiac axis and superior mesenteric lymph nodes were cleared in patients with head, neck and uncinate process cancer while aortocaval nodes were dissected in cases of enlargement. Follow-up study included routine laboratory tests, serum carbohydrate antigen 19-9 (CA 19-9), and abdominal CT in first month after surgery and every 3 mo thereafter. The time of recurrence or metastasis was defined initial occurrence time in CT and the site of recurrence or metastasis was defined from CT findings. We categorized the type of recurrence into LM, locoregional recurrence defined as a tumor confined at retroperitoneal margin and lymph nodes. Peritoneal dissemination and distant metastasis were also categorized. Tumor stage was defined according to the American Joint Cancer Committee (AJCC) criteria. Medical records were retrospectively reviewed to investigate radiological findings, pathological findings with T stage, tumor differentiation, lymph node or perineural invasion.

There was a lack of consensus on the indications and effectiveness of adjuvant therapy for resected PDAC, and a standard chemoradiation protocol has not been developed at our institute. The decision on whether adjuvant therapy was undertaken was made giving consideration to the age, compliance, economic status, and social activity of the patient. However, the majority of patients received adjuvant therapy protocols that consisted of 4000 to 5000 cGy of external beam radiation and gemcitabine or capecitabine based chemotherapy[6]. In this study, forty patients underwent concurrent chemoradiation therapy and ten patients underwent the alternatives of chemotherapy or radiation. For evaluating the clinical, pathological characteristics and survival with LM group, the patients were divided into two groups based on the occurrence of LM. Chi-square and Fisher exact tests were used for comparisons among the categorical variables. Survival analysis was performed using the Kaplan-Meier method. Univariate differences in survival among the subgroups were compared using the log-rank test. P < 0.05 was considered significant. SPSS 12.0 for Windows was used for all statistical analysis.

RESULTS
Analysis for patients with metastasis 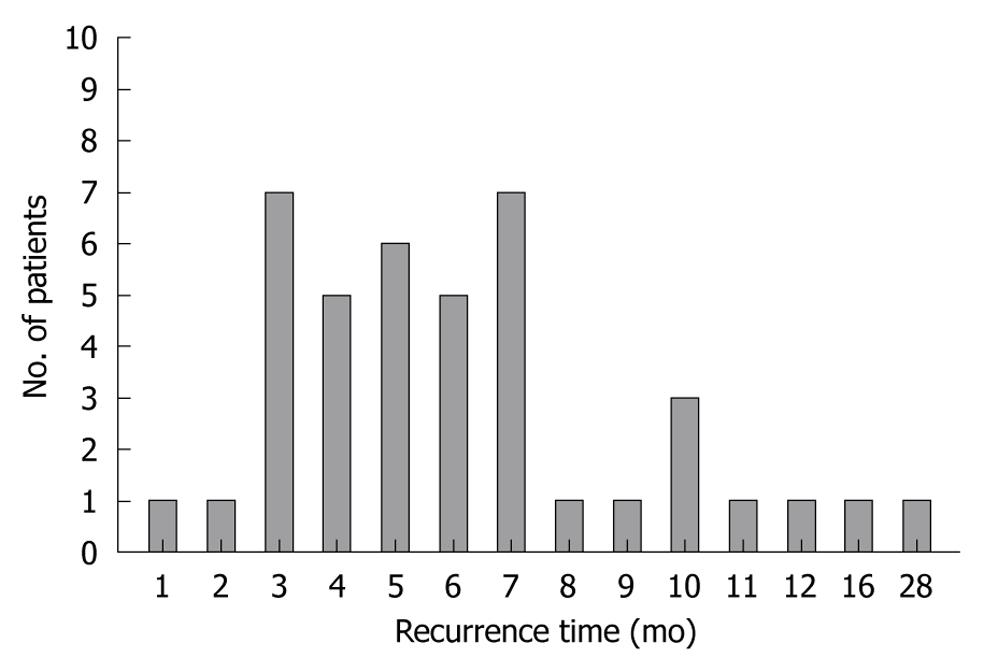 Survival of patients with LM 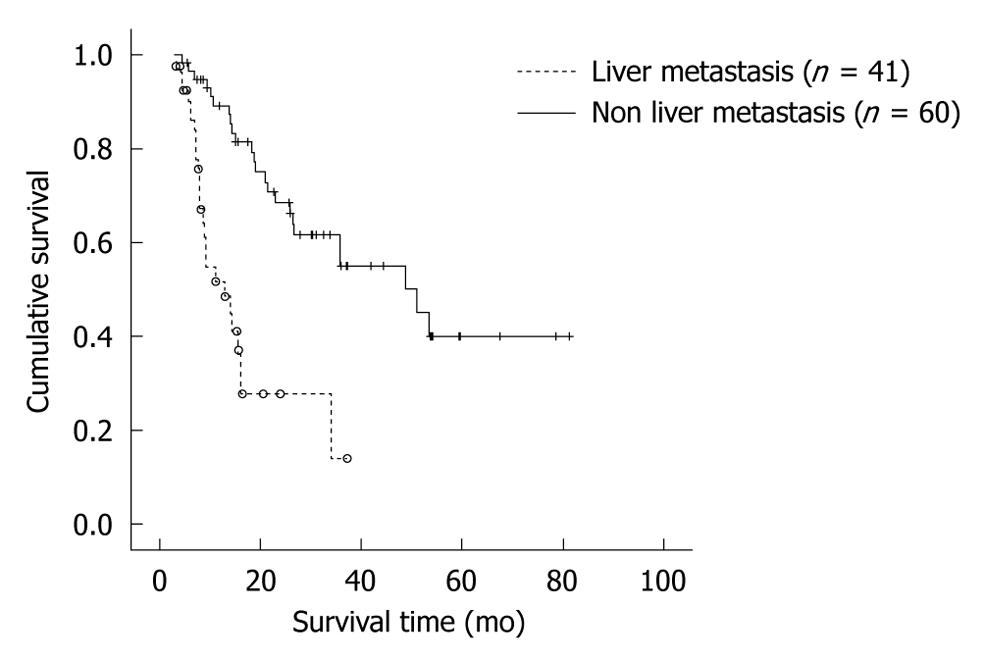 Until recently, few clinical studies had been conducted on the recurrence of PDAC after pancreatic resection. The infrequency of study is influenced by the higher rate of recurrence and poorer survival rate after curative resection compared with another gastrointestinal cancers, and by the limited evidence of survival improvement after adjuvant treatment for PDAC. Surgical resection for PDAC is a unique treatment modality which is expected to curative. The investigation of surgical resection and research into adjuvant therapy are essential to achieve improvement in survival. For this reason, the evaluation of recurrence and metastasis of PDAC after resection is important.

Another report[11] showed that the median survival time of patients with hepatic metastasis was 6 mo and when hepatic metastasis in combined with local recurrence only 4 mo, Various investigations have shown few patients with over 1 year survival. Poor survival and prognoisis were influenced by very early recurrence within a year despite radical resection for PDAC[15,16].

In particular, Hishinuma et al[17] demonstrated that local recurrence occurs frequently, but is rarely a direct cause of death, and most patients died of metastatic disease according to 27 patients autopsies. Our series revealed that 60.9% of LM occur within 6 mo, and 95.1% LM within a year. It is not too much to say that LM of PDAC will almost certainly arise within a year.

Amikura suggested that the early development of liver metastases within 3 mo after pancreatic resection supports the hypothesis that occult microscopic liver metastases are frequently present at the time of resection[18]. A recent Japanese study reported that undifferentiated PDAC is independently associated with hepatic metastasis after pancreatic resection[14]. Our data showed no difference in terms of tumor cell differentiation between LM and other type of recurrence. In groups at low risk for LM, cell differentiation is a meaningful predictor for LM. In our study, tumor size and CA 19-9 levels are significant predictors for LM, Takamori et al[19] revealed the positive correlation between the expression of CA 19-9 and the hepatic metastatic potential of pancreatic cancer. The depth of portal vein wall invasion significantly alters survival after curative pancreatic resection combined with portal vein resection[20]. Previous studies have suggested that several molecules, including epidermal growth factor receptor, E-cadherin, and laminin g-chain, that are expressed at high levels in undifferentiated PDAC are associated with postoperative hepatic metastasis[21-23]. Such molecular changes may enhance the ability of pancreatic ductal carcinoma to metastasize to the liver[14]. Niedergethmann et al[24] reported that CTSB and CTSL rather than UICC stage, TNM classification, or tumor grading, are strong and independent prognostic markers in resectable pancreatic adenocarcinoma. Furthermore, CTSB is a predictor for early recurrence after curative resection. Seo et al[25] suggested that vascular endothelial growth factor expression seems to be an important predictor for both LM and poor prognosis in ductal pancreatic adenocarcinoma. Other study suggested that fibrotic focus reduced membranous β-catenin expression, and reduced cytoplasmic β-catenin expression were significantly associated with shorter LM-free survival[26,27]. These investigations suggest that cancer differentiation relating factors influence the hepatic metastasis of PDAC, and predict poor prognosis. We support cautiously the hypothesis that selective adjuvant chemotherapy may be possible using post operative LM prediction.

Although no standard post pancreatectomy adjuvant chemotherapy for PDAC has been established, several gemcitabine-based adjuvant therapies have been investigated since 2000. In one European ramdomized controlled prospective study, postoperative gemcitabine significantly delayed the development of recurrent disease after complete resection of pancreatic cancer[28]. A Japanese study[29] reported similar results for patients with PDAC and LM. A number of papers have revealed that in patients with advanced PDAC, intra-arterial chemotherapy or chemotherapy via portal vein with systemic chemotherapy appeared to be effective against PDAC and LM[15,30-33]. Hepatectomy was applied in patients with LM in Germany, with between 9 and 24 mo of survival after hepatectomy reported[34]. Not only adjuvant local chemotherapy but also liver resection for LM were successful in achieving survival improvement after pancreatectomy with PDAC. The enthusiastic efforts of several researchers searching for molecular factors predicting LM may result in selective adjuvant therapy and improvement of survival in future.

The prognosis of pancreatic ductal adenocarcinoma (PDAC) with liver metastasis (LM) is dismal even after curative pancreatectomy. However, prognostic factors for LM after PDAC resection are not well established.

The authors retrospectively analyzed 101 PDAC patients who underwent surgical resection at the Samsung Medical Center between January 2000 and December 2004.

To investigate prognostic factors for LM, the authors compared and analyzed the clinical and pathological factors between two groups, segmented according to LM.

This report deals with very important problems and supports the understanding of the physician treating pancreatic cancer.