A carcinoma displaying undifferentiated features with dense lymphoplasmacytic infiltration is defined as a lymphoepithelioma-like carcinoma (LEC), and some of LEC is associated with Epstein-Barr virus (EBV). All of the 13 previously reported cases of LEC of the biliary system were intrahepatic in location. Herein, we describe the first case of LEC of the inferior common bile duct. A 68-year-old Japanese man, who had been previously treated for hepatocellular carcinoma using microwave coagulation therapy, was found to have tumors of the common bile duct and pancreas head. Histopathological study of the resected tumor showed solid or cohesive nests of large undifferentiated cells with irregular large vesicular nuclei and nucleoli. Around the tumor cell nests, dense lymphoplasmacytic infiltration was observed. Focal glandular differentiation (approximately 5%) was also present. These histopathological features corresponded morphologically to LEC. Immunohistochemically, the tumor cells were positive for cytokeratin (CK) 7, CK 19 and CA19-9, but negative for CK 20 and Hep Par 1. In situ hybridization for Epstein Barr virus early small RNAs disclosed no nuclear signal in tumor cells. Therefore, a diagnosis of non-EBV-associated LEC of the inferior common bile duct was made. Although the prognosis of the biliary LEC is thought to be better than that of conventional cholangiocarcinoma, the differences in prognosis between EBV-positive and -negative cases have not yet been established. Therefore, additional case studies will be needed to clarify the clinicopathological features of LEC of the biliary tract.

A carcinoma displaying undifferentiated features with dense lymphoplasmacytic infiltration is defined as a lymphoepithelioma-like carcinoma (LEC). Although the nasopharynx is a common site for LEC, it has been reported in other organs including salivary gland[1], trachea[2], lung[3,4], thymus[5], esophagus[6], stomach[7], urinary bladder[8], uterine cervix[9,10], and vagina[11]. Some LECs are associated with Epstein-Barr virus (EBV) infection[1,3,5-7].

A tumor in the pancreas head was identified using computed tomography (CT) in a 68-year-old Japanese man who had undergone partial resection of the thyroid gland for papillary carcinoma 7 years earlier. Eight years earlier, he had been also treated with microwave coagulation therapy for a hepatocellular carcinoma (HCC), and no recurrence of the liver tumor was observed in medical follow-ups. Abdominal CT images showed a relatively well-circumscribed tumor, measuring 30 mm × 20 mm, in the pancreas head and invading the duodenum, as well as a dilated common bile duct (Figure 1). An upper gastrointestinal endoscopic examination revealed a submucosal tumor in the inferior portion of the duodenum. Biopsies of the duodenal mucosa disclosed invasive growth of a poorly differentiated carcinoma in the lamina propria. An endoscopic retrograde cholangiopancreatography revealed that a polypoid tumor was present in the inferior common bile duct. The common bile duct was dilated upstream the polypoid tumor, but the pancreatic duct was intact. Systemic clinical imaging examinations revealed no tumorous lesions except in the common bile duct and pancreas head. 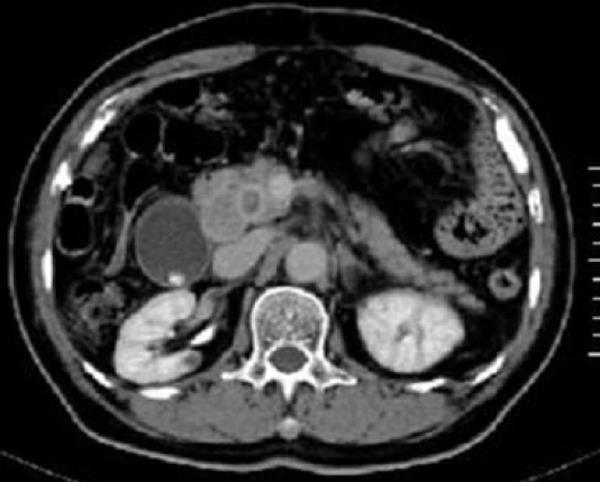 Pre-operative clinical diagnosis was of an inferior common bile duct cancer with invasion into the pancreas head and duodenum. The patient underwent pancreatoduodenectomy.

Upon examination of cut sections of the resected specimen, two tumor masses were identified: A relatively well-circumscribed yellowish-white tumor (measuring 30 mm × 20 mm) previously detected in the pancreas head was found to continue to a polypoid tumor (measuring 10 mm × 7 mm) present in the inferior common bile duct.

Histopathologically, the tumors of the bile duct and pancreas head comprised solid or cohesive nests of large undifferentiated cells with distinct cell borders, and irregular large vesicular nuclei and nucleoli (Figure 2A and B). Around the tumor cell nests, dense lymphoplasmacytic infiltration was observed, and infiltrative lymphocytes and plasma cells were of mature appearance and without atypia (Figure 2A and B). These histopathological features corresponded morphologically to LEC, which comprised approximately 95% of the tumor. In addition, focal glandular differentiation was observed (Figure 2C). A transition between LEC and glandular components was present. No area of desmoplastic reaction was noted. The carcinoma invaded into the lamina propria of the duodenum directly. No lymph node metastasis was observed.

Immunohistochemical studies and in situ hybridization were carried out using an autostainer (XT System Benchmark; Ventana Medical Systems, Tucson, AZ, USA). The LEC component was uniformly and strongly positive for pan-cytokeratin (AE1/AE3), and focally positive for cytokeratin (CK) 7, CK 19, and CA19-9 (Figure 3A). The glandular component was also strongly positive for AE1/AE3, CK 7, CK 19 and CA19-9. The LEC and glandular components were negative for CK 20 and hepatocyte (Hep Par 1) antibodies. Overexpression of p53 protein was observed both in LEC and glandular components (Figure 3B). The lymphoid stroma was composed of a mixture of CD3-positive T lymphocytes, CD20-positive B lymphocytes, and CD138-positive plasma cells, with a predominance of CD3-positive T lymphocytes and CD138-positive plasma cells. 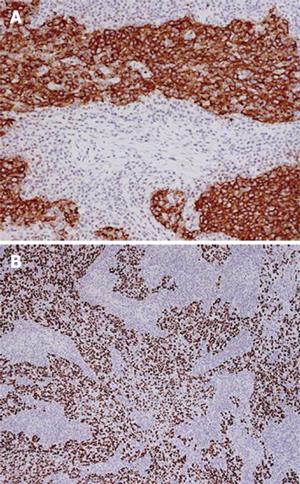 Based on these histopathological, immunohistochemical and in situ hybridization findings, a diagnosis of non- EBV-associated LEC of the inferior common bile duct was made.

Post-operative course was uneventful, and the patient has been free from tumor recurrence in the 5 mo since surgery.

We report the first case of LEC of the inferior common bile duct. Since Hsu et al[12] reported a case of intrahepatic lymphoepithelioma-like cholangiocarcinoma in 1996, only 12 additional cases of LEC of the biliary tract have been reported in the English literature[13-20]. In Table 1, we summarize the clinicopathological features of these 13 cases and the present case of biliary LEC. Although there is no predilection for either sex (male: female 7:7), cases of Asian race predominated (11 of 14 patients were Asian). Except for a 19-year-old Hispanic girl reported by Ortiz et al[15], all patients were adults (average 55.1 years; range 19-71). The 13 cases of biliary LEC reported previously were all intrahepatic cholangiocarcinoma, and this is the first case report of extrahepatic biliary lymphoepithelioma-like cholangiocarcinoma.

In addition to the typical LEC component that predominated in the present case, the tumor had a minor (approximately 5%) adenocarcinoma component. Eleven of 12 cases (92%) of intrahepatic lymphoepithelioma-like cholangiocarcinoma also had an adenocarcinoma component (Table 1), indicating that this is characteristic of biliary LEC[17]. In contrast, LEC of other organs most commonly lack glandular differentiation.

The prognosis of biliary LEC is thought to be better than that of conventional cholangiocarcinoma (Table 1)[17].

Similarly, it has been reported that the prognosis of patients with LEC of the stomach and lung is better than that of non-LEC[24,25], and that the presence or absence of EBV has no prognostic significance in LEC of various organs[26]. In biliary LEC cases, differences between the prognoses of EBV-positive and -negative cases have not yet been established because of the rarity of this disease. Therefore, additional case studies will be needed to clarify the clinicopathological features of LEC of the biliary tract.

In conclusion, we report the first case of non-EBV-associated lymphoepithelioma-like cholangiocarcinoma of the inferior common bile duct. The prognosis of LEC of the biliary tract is thought to be better than that of conventional cholangiocarcinoma, although the differences in the prognoses of EBV-positive and -negative cases have not yet been established. Therefore, additional studies will be needed to clarify the clinicopathological features of LEC of the biliary tract.