Intestinal lymphangiectasia in the adult may be characterized as a disorder with dilated intestinal lacteals causing loss of lymph into the lumen of the small intestine and resultant hypoproteinemia, hypogammaglobulinemia, hypoalbuminemia and reduced number of circulating lymphocytes or lymphopenia. Most often, intestinal lymphangiectasia has been recorded in children, often in neonates, usually with other congenital abnormalities but initial definition in adults including the elderly has become increasingly more common. Shared clinical features with the pediatric population such as bilateral lower limb edema, sometimes with lymphedema, pleural effusion and chylous ascites may occur but these reflect the severe end of the clinical spectrum. In some, diarrhea occurs with steatorrhea along with increased fecal loss of protein, reflected in increased fecal alpha-1-antitrypsin levels, while others may present with iron deficiency anemia, sometimes associated with occult small intestinal bleeding. Most lymphangiectasia in adults detected in recent years, however, appears to have few or no clinical features of malabsorption. Diagnosis remains dependent on endoscopic changes confirmed by small bowel biopsy showing histological evidence of intestinal lymphangiectasia. In some, video capsule endoscopy and enteroscopy have revealed more extensive changes along the length of the small intestine. A critical diagnostic element in adults with lymphangiectasia is the exclusion of entities (e.g. malignancies including lymphoma) that might lead to obstruction of the lymphatic system and “secondary” changes in the small bowel biopsy. In addition, occult infectious (e.g. Whipple’s disease from Tropheryma whipplei) or inflammatory disorders (e.g. Crohn’s disease) may also present with profound changes in intestinal permeability and protein-losing enteropathy that also require exclusion. Conversely, rare B-cell type lymphomas have also been described even decades following initial diagnosis of intestinal lymphangiectasia. Treatment has been historically defined to include a low fat diet with medium-chain triglyceride supplementation that leads to portal venous rather than lacteal uptake. A number of other pharmacological measures have been reported or proposed but these are largely anecdotal. Finally, rare reports of localized surgical resection of involved areas of small intestine have been described but follow-up in these cases is often limited.

Waldman et al[1] first detailed cases of intestinal lymphangiectasia almost 50 years ago. In their cases, edema and hypoproteinemia were present with both hypoalbuminemia and hypogammaglobulinemia. Estimated measurements of the total body albumin pool using a radio-labeled albumin method were reduced while fecal excretion was increased. In some, steatorrhea was also present. Biopsies of the small bowel are needed to confirm the diagnosis[2]. These show prominent dilated lymphatics in the lamina propria region of the villous structure, often with extension into submucosa (Figures 1 and 2). Others have commented that these changes may be difficult to detect since dilation of intestinal lacteals or lymph containing capillaries may be quite focal[3]. Familial presentations were also recorded[1]. Most often affected were children and young adults, although even historically, diagnosis was initially also occasionally defined in older, even elderly, adults. The precise cause of intestinal lymphangiectasia with enteric protein loss remains obscure but changes in regulatory molecules involved in lymphangiogenesis have been reported in the duodenal mucosa[4]. 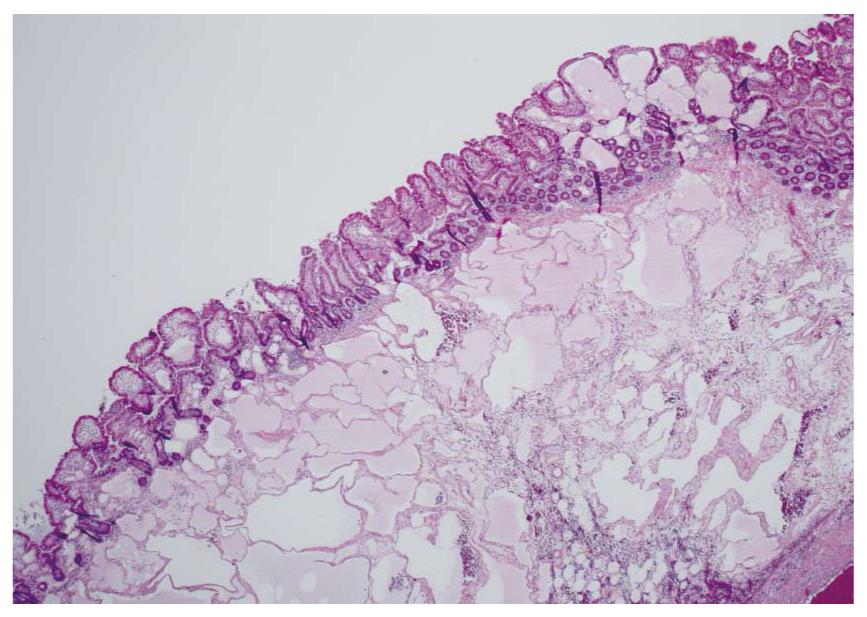 Figure 1 Low power view of dilated lymphatics involving mucosa and submucosa in intestinal lymphangiectasia. In this section, the mucosal changes are patchy rather than continuous in distribution, emphasizing the multifocal nature of the disorder. 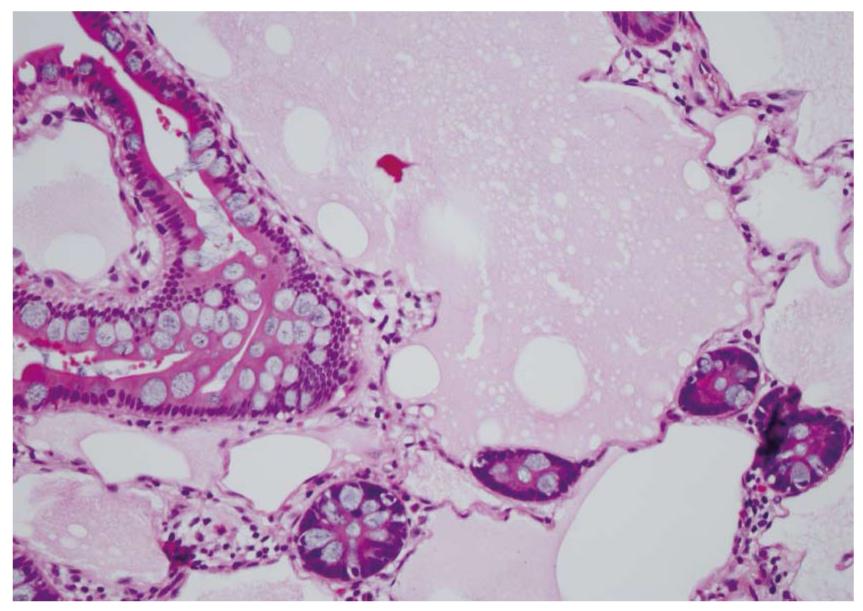 Commonly reported clinical findings have traditionally described pitting edema, usually in a symmetrical distribution involving the lower limbs. If severe edema is evident, facial and scrotal (or vaginal) involvement may occur. Effusions may also develop in pleural, pericardial and peritoneal cavities with gross chylous ascites. Sonographic evidence of fetal ascites has also been reported[5]. Rarely, lymphedema (that may be difficult to differentiate from edema due to hypoalbuminemia and low oncotic pressure) and the so-called “Stemmer’s sign” (i.e. skin fibrosis on dorsum of the second toe due to chronic lymphedema)[6] have been described. It should be emphasized, however, that many of these clinical features likely reflect the severe end of the spectrum of clinical changes, especially in adults with intestinal lymphangiectasia. In recent years, directly due to the emergence of newer endoscopic methods, particularly video capsule endoscopy in adults, detection of mucosal changes suggestive of lymphangiectasia seem to be relatively common. For example, in a recent evaluation of 1866 consecutive endoscopic examinations, histological confirmation of duodenal lymphangiectasia was evident in 1.9%[7]. More significant, even if lymphangiectasia persisted on consecutive endoscopic studies over a year apart, there was no clinical evidence of malabsorption[7]. Therefore, it would seem that in most histologically-confirmed intestinal lymphangiectasia, clinical features may be very limited and the classical “textbook” recorded changes may be more reflective of the most severe end of the clinicopathological spectrum in adults.

In some, an abdominal mass may be noted[8], either on clinical evaluation or with radiological imaging studies, particularly ultrasound (with or without endoscopy) or computerized tomography. These masses are usually cystic and often represent associated lymphangiomas. The latter are entirely benign lesions that may be associated with lymphangiectasia in either small or large bowel[9,10]. The most commonly reported intestinal site is the duodenum[11], in part, perhaps, because these have been easier to detect with endoscopic evaluation showing a smooth, soft, polypoid cystic lesion with a broad base[10]. In others, a segmental area of edema and wall thickening may occur causing a localized obstruction and, occasionally, resulting in a segmental intestinal resection[12]. To some degree, evolving imaging methods not available during the era of the initial description of this disorder have enhanced our appreciation for these more extensive lymphatic changes.

A rare association of intestinal lymphangiectasia with celiac disease has been noted[13]; however, in most with primary intestinal lymphangiectasia, the intestinal mucosa appears to be otherwise normal on routine microscopic evaluation apart from the dilated lacteals. In addition, iron deficiency may occur[14] but it is not clear if there is any impairment of iron absorption in primary intestinal lymphangiectasia even if it primarily localized in the duodenum. Chronic occult blood loss may occur in some[15] and non-specific small bowel ulceration has been noted[14]. Rarely, massive bleeding has been recorded[16,17]. In a recent study using capsule endoscopy[18], an intriguing but statistically significant association with coincident small bowel angiodysplasia was noted, suggesting another possible mechanism for occult blood loss with lymphangiectasia. Recurrent hemolysis with uremia may occur[19] and, possibly, urinary iron loss from ongoing intravascular hemolysis may result. The mechanisms involved for malabsorption of fat and fat soluble vitamins are not fully defined and need to be further explored. However, osteomalacia associated with vitamin D deficiency has been noted[20] and tetany attributed to hypocalcemia has been reported[21].

Rarely, yellow nails have been described (i.e. “yellow nail syndrome”) in primary intestinal lymphangiectasia with dystrophic ridging and loss of the nail lunula. In addition, lymphedema and pleural effusions were noted[22]. Finally, an intriguing association with autoimmune polyglandular disease type 1 has been described[23,24].

Diagnosis is defined by endoscopic evaluation and biopsy of duodenum and/or jejunum[1,2] or alternatively from surgically resected small intestine. Dilated lacteals are detected in the mucosa, sometimes extending into the submucosa (Figures 1 and 2). Usually, the overlying small intestinal epithelium is completely normal. Sometimes, ileal biopsies from ileocolonoscopy may show the small intestinal histopathological changes. High-resolution magnifying video endoscopy may have an important role in detection of intestinal lymphangiectasia[25]. Video capsule studies may permit evaluation of the extent of the lymphangiectasia including the “yellow nail syndrome” and has been confirmed with surgical exploration[27-29]. Double-balloon enteroscopy has also emerged in the evaluation of malabsorption and up to 13% of patients were found to have yellow and white submucosal plaques, likely to be lymphangiectasis[30,31]. Although radiotracers and direct lymphatic imaging were often historically used, magnetic resonance imaging has also been applied in patients with intestinal lymphangiectasia to evaluate intestinal, mesenteric and thoracic duct changes[32].

Associated immunological changes have been described in a number of studies[33-36]. These findings include hypoproteinemia, hypoalbuminemia and hypogammaglobulinemia. Lymphocytopenia occurs with B-cell depletion reflected by diminished immunoglobulins IgG, IgA and IgM, as well as T-cell depletion, especially in the number of CD4+ T-cells as naïve CD45RA+ lymphocytes. In addition, functional changes occur including impaired antibody responses and prolonged skin allograft rejection may result. Finally, a recent report indicates that T-cell thymic production failed to compensate for enteric T-lymphocyte loss suggesting multiple mechanisms are involved in lymphopenia associated with lymphangiectasia[37].

Enteric protein loss may be suspected if fecal alpha-1-antitrypsin is increased. Radio-labeled albumin studies may demonstrate increased loss but prolonged scanning may be required as protein loss may be periodic or intermittent. In some cases, localization of the site of protein loss may also be possible[38]. Imaging with ultrasound or computerized tomography may define intestinal wall thickening, mesenteric “edema” or ascites[39-41]. Magnetic resonance imaging has also been reported for use in the diagnosis of protein losing enteropathy[42]. Lymphoscintigraphy may also be used to anatomically define the lymphatic system but this procedure has largely become historical, less often performed and may correlate poorly with the severity of protein loss[43].

Treatment has traditionally included a low fat diet along with a medium-chain triglyceride oral supplement[50]. The latter directly enters the portal venous system and bypasses the intestinal lacteal system. Some believe that reduced dietary fat prevents lacteal dilation and possible rupture with loss of protein and lymphocyte depletion. In some, this therapy can cause reversal of clinical and biochemical changes, being more effective in children than adults[51]. In some that fail to respond, other forms of nutritional support have been required[52].

Other therapies have been reported. Tranexamic acid, an antiplasmin, has been used to normalize immunoglobulin and lymphocyte numbers[53]. Octreotide was reported to be useful but the mechanism is not clear[54]. Segmental small bowel resection for localized areas of lymphangiectasia has been recorded[55]. Steroids remain controversial although effectiveness in systemic lupus erythematosus with protein-losing enteropathy has been recorded. Infusions of intravenous albumin may provide temporary effectiveness but usually this exogenous source is also metabolized or lost. Management of lower limb edema is also important, usually with elastic bandages or stockings.

The long-term natural history of intestinal lymphangiectasia has been evaluated only to a limited extent. In a recent report[56], dietary intervention appeared to be effective in most cases, particularly in pediatric-onset disease. In the same report, 5% appeared to develop malignant transformation with lymphoma with the average duration to lymphoma diagnosis being over 30 years.