A 17-year-old female presented with rectal bleeding from an ulcerated sigmoid mass in 1994. Initial pathological evaluation revealed a rare clear cell neoplasm of the colon, possibly originating from kidneys, adrenals, lung or a gynecologic source as a metastatic lesion. Extensive imaging studies were negative, and over the next 15 years, she remained well with no recurrence. The original resected neoplasm was reviewed and re-classified as a perivascular epithelioid cell neoplasm (PEComa). Although the long-term natural history of PEComas requires definition, increased clinical and pathological awareness should lead to increased recognition of an apparently rare type of colonic neoplasm that likely occurs more often than is currently appreciated.

Clear cell tumors were historically described as benign and malignant neoplasms consisting of cells with clear cytoplasm characteristic of kidneys and adrenal glands[1]. Later, it was appreciated that these clear cell neoplasms might develop in a variety of other sites in addition to the kidneys, including tissues originating from the developing mullerian ductal system[2]: ovaries, extra-ovarian endometriosis, uterine cervix, upper vagina or lower genital tract. Detailed pathological descriptions of clear cell tumors in the lung were also reported (clear cell “sugar tumors”)[3]. Finally, cytoplasmic clearing was detected in other neoplasms (e.g. myoepithelial neoplasia in major salivary glands, squamous cell carcinoma, chordomas), and focally in neoplastic epithelium of colorectal adenomas, likely reflecting cytoplasmic glycogen or lipid[4].

Clear cell tumor in the colon was initially reported in 1964 by Hellstrom and Fisher because the neoplastic clear cells resembled the physaliferous (clear) cells of chordomas[5]. Since then, these colonic tumors have been described, largely in males and usually on the left side of the colon[2]. In 1988, the Canadian experience in these clear cell tumors emphasized their rarity being limited to a single report of 4 cases accessed from the National Canadian Tumor Reference Centre in Ottawa[1]. Some cases have also appeared in the literature described as metastatic clear cell carcinomas with a focus from other organs, including renal or ovarian sites[6]. Rarely, concomitant renal and colonic clear cell carcinomas were also noted[7]. Due to the limited number of reported cases, however, the natural history and long-term prognosis of this colonic neoplasm has not been determined.

In 1992, Bonetti et al[8] analyzed the the shared pathological features of angiolipomas and clear cell “sugar” tumors of the lung: In 2002, the World Health Organization officially recognized this family of neoplasms derived from these distinctive cells as perivascular epithelioid cell neoplasms (PEComas)[9]. The family included: adenomyoepithelioma (AML), lymphangioleiomyomatosis (LAM), clear cell sugar tumor of the lung, clear cell myomelanocytic tumor of the falciform ligament and generic PEComas in a variety of sites, including the uterus, soft tissue, and rarely the intestinal tract[10-15]. An association was also described between tuberous sclerosis, AML and LAM[16].

The present report describes the pathological and histochemical features of a clear cell neoplasm of the colon, later re-classified as a PEComa, and notes an entirely benign clinical course extending over more than a decade with detailed clinical and endoscopic monitoring after a localized colonic resection.

A 33-year-old female was referred in 2009 for colonoscopic evaluation because of a past history of a resected sigmoid neoplasm in 1994. Her colonoscopy was normal with a well-healed anastomosis. Because of her age, however, her clinical history and the pathology of her previously resected tumor were re-evaluated. In addition, as part of this review, added pathological studies on the original stored paraffin blocks were done.

At the age of 17 years, she presented with an emergent rectal bleeding event and a hemoglobin of 90 g/L. Endoscopic evaluation showed an ulcerated polypoid lesion in the sigmoid colon suggestive of a possible carcinoid tumor. No transfusions were given. A sigmoid resection was performed for a tumor estimated to have a diameter of 4-6 cm showing features of a “clear cell” tumor of the colon. Later clinical evaluation and blood tests were normal. In particular, there was no evidence for tuberous sclerosis or other disorders. Computed tomography scanning of her chest, abdomen and pelvis were done to exclude metastatic disease from other possible primary clear cell neoplasms (e.g. renal cell or adrenal cell carcinoma) and the scanning was normal. Subsequent colonoscopies in 1997, 2000, 2003 and 2006 showed a well-healed anastomosis, but no other findings.

Pathological review confirmed an unusual clear cell tumor composed of discrete rounded collections of clear cells in a fine vascular stroma with centrally placed low-grade nuclei (Figures 1 and 2). The mitotic rate was low. The tumor was well delimited but was unencapsulated. Intramucosal invasion was present but there was no invasion of the muscularis propria. There were no nodal metastases. The tumor appeared to arise in the submucosa of the colon and extended to the mucosal surface with ulceration. Initial pathological differential diagnosis were: metastatic clear cell carcinoma of the kidney or adrenal gland; clear cell variant of a primary colorectal carcinoma or carcinoid tumor; a paraganglioma variant; a clear cell variant of a smooth muscle tumor or gastrointestinal stromal tumor. 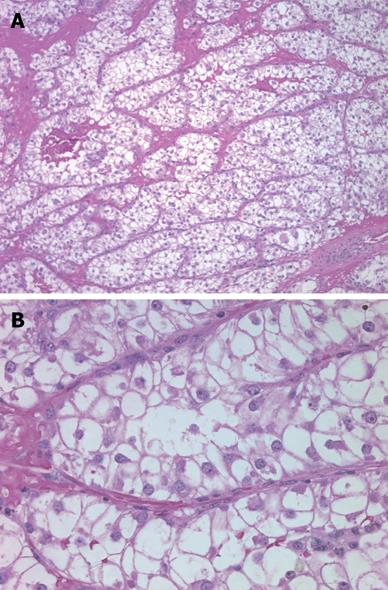 The previous paraffin blocks from the resected tumor were recovered, reviewed and added special studies were done. All neuroendocrine markers that were initially negative were repeated and were again negative. These included neuron-specific enolase, synaptophysin, chromogranin and CD-56. Initial electron microscopy was not repeated, however, this did not reveal evidence of melanosomes or intercellular junctions and a cell of origin could not be defined. Histochemical staining for neurosecretory granules was negative by argyrophil and Fontessa-Masson methods, and the cells were also negative for mucin (mucicarmine). The cells were negative using a multimolecular weight pan-keratin cocktail antibody and did not express cytokeratin-7 or cytokeratin-20. Cells did not express c-kit (CD-117), desmin, smooth muscle actin, muscle specific actin, CD-34 or vimentin. The tumor cells were negative for S-100, but were strongly positive for HMB-45 (Figure 3). Based on this re-evaluation of the original stored tissue blocks, the colonic neoplasm was re-classified as a PEComa of the colorectum, or PEComa. 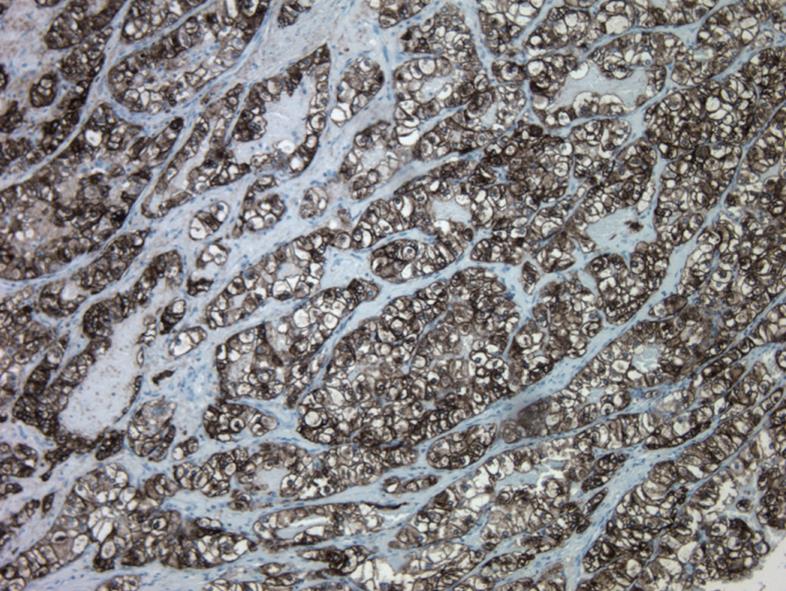 PEComas are rare tumors characterized by myomelanocytic differentiation. To date, the precursor lesion or cell of origin has not been identified. Intestinal PEComas, and specifically, colonic PEComas have been rarely described in only a few case reports that detail the morphologic and immunohistochemical features[16-23]. The precise incidence of these neoplasms is not known, but some have estimated these to occur in less than 0.1% of colon neoplasms[4]. In part, this low rate currently reflects different factors that may result in increased recognition in the future. As in the present case, earlier evaluation of some clear cell tumors may not have been conclusive, or the pathological studies may not have permitted final classification. Likely, an increased awareness among gastroenterologists and pathologists will result in increased recognition in the intestinal tract as these are likely to occur more often than is currently recognized.

The biological behavior of the PEComa family is still not very well understood. Clinically benign, but concomitant nodal involvement with angiomyolipomas may have represented multifocal, rather than metastatic disease[6,7]. Histologic criteria indicative of malignancy in PEComas have not been proven, in part, because information on the long-term natural history of intestinal lesions has not been reported. It does appear, however, that non-gastrointestinal PEComas with definite evidence of malignant behavior are usually large (over 5 cm), contain areas of coagulative necrosis and also have a high mitotic rate. Other important criteria that have been suggested include: an infiltrative tumor border, high nuclear grade and cellularity, and vascular invasion. For intestinal lesions, the reported length of follow-up has been usually short (as with most case reports) and the outcome data are very limited. In a recent review[23], the longest duration of follow-up for a colonic PEComa was 24 mo. In the present case, the PEComa (initially defined as a clear cell tumor of the sigmoid colon) appeared to be completely resected. However, added imaging studies were performed to ensure that another primary site (e.g. kidney, lung) was not evident and further endoscopic follow-up has confirmed an entirely benign clinical course with no recurrence over a period of more than 15 years. Added histopathological studies with larger numbers of cases will be needed to further define the long- term natural history of this disorder.