Diarrhea is a common side effect of chemotherapy. Pseudomembranous colitis is a well known complication of antibiotic treatment that can also be observed, albeit rarely, with certain chemotherapeutic agents. We present four cases of severe colitis in patients undergoing treatment with taxane-based chemotherapy for pancreatic, lung and breast cancer. None of them had recently received antibiotics. One patient presented with a bowel perforation and three had endoscopic findings of pseudomembranous colitis. Two of these three patients had negative stool toxin assays for Clostridium difficile. In the patient presenting with perforation, an emergency left hemicolectomy was performed and the pathological findings in the colon were acute inflammation and ischemic necrosis; the other three patients were treated with oral vancomycin and/or oral or intravenous metronidazole leading to complete resolution of the symptoms. Apart from pseudomembranous colitis, we describe patients presenting with neutropenic enterocolitis as well as ischemic colitis after docetaxel use. These cases provide some insight into the spectrum and varied clinical presentations of severe colitis associated with taxane-based chemotherapy.

Diarrhea and pseudomembranous colitis are well established complications of antibiotic therapy. Some chemotherapeutic agents are also associated with different grades of inflammation and necrosis of the colonic mucosa with alteration of the intestinal flora. This has been proposed as the pathophysiological mechanism responsible for the development of pseudomembranous colitis in some patients receiving these drugs. Methotrexate has been the most commonly implicated agent of this class but platinum-containing drugs and taxanes are well known for their potential to cause extensive inflammatory changes in the colonic mucosa, therefore creating a favorable environment for the overgrowth of Clostridium difficile (C. difficile) and production of its exotoxins. We present four cases of severe colitis that developed during taxane-based chemotherapy for pancreatic, lung and breast cancer, including one patient with a colonic perforation.

An 83-year old Caucasian male had undergone a pancreaticoduodenectomy for a stage IIB adenocarcinoma of the pancreas and was receiving second-line therapy on a clinical trial with the combination of capecitabine and docetaxel. Capecitabine had to be stopped after 3 d of the first cycle due to severe fatigue. Five days later, the patient presented with diarrhea and painless melena. He was not neutropenic and had a platelet count of 85 000/μL. Stool enzyme immunoassays for C. difficile toxins were negative but colonoscopy demonstrated diffuse pseudomembranes in the rectum, sigmoid and descending colon (Figure 1). Oral metronidazole was started but the patient developed severe nausea and vomiting. Therapy was changed to oral vancomycin leading to complete resolution of the symptoms. 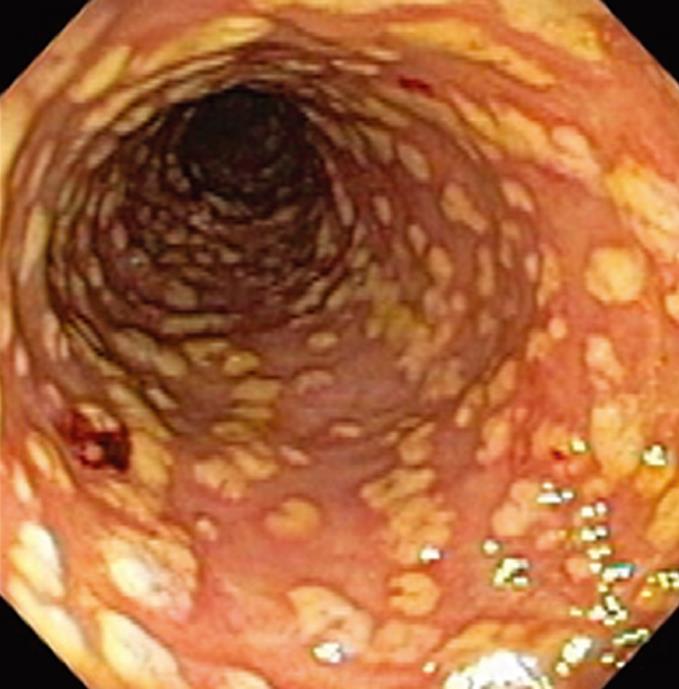 A 47-year old African-American male with metastatic adenocarcinoma of the lung was receiving palliative treatment with carboplatin and docetaxel. Following two cycles of chemotherapy, the patient developed diarrhea that was easily controlled with a brief course of loperamide. Ten days after the third cycle, he presented with febrile neutropenia, odynophagia, mucositis, diffuse abdominal pain and severe bloody diarrhea. His white blood cell count was 600/μL and the stool enzyme immunoassay for C. difficile toxin was positive. A colonoscopy revealed diffuse pseudomembranes in the sigmoid and descending colon. Antibiotic therapy with intravenous metronidazole and oral vancomycin was initiated for treatment of severe C. difficile colitis and the patient had a complete resolution of his symptoms.

A 41-year old Hispanic female with stage IIA invasive ductal carcinoma of the breast, estrogen and progesterone receptor positive and HER2 negative, was receiving neoadjuvant chemotherapy with cisplatin and docetaxel with peg-filgrastim prophylaxis. Nine days after the second cycle of chemotherapy, she developed abdominal cramps and severe watery diarrhea that quickly became bloody. Her white blood cell count was 37 500/μL and the platelet count was 300 000/μL. Stool enzyme immunoassays for C. difficile toxins were negative. A computed tomography scan of the abdomen and pelvis demonstrated thickening of the walls of the transverse and descending colon (Figure 2A). A flexible sigmoidoscopy revealed moderate to severe mucosal inflammation of the sigmoid and rectum with diffuse subepithelial hemorrhages. No pseudomembranes were observed. Antibiotic therapy with oral metronidazole and oral vancomycin was initiated and the patient had complete resolution of her symptoms. 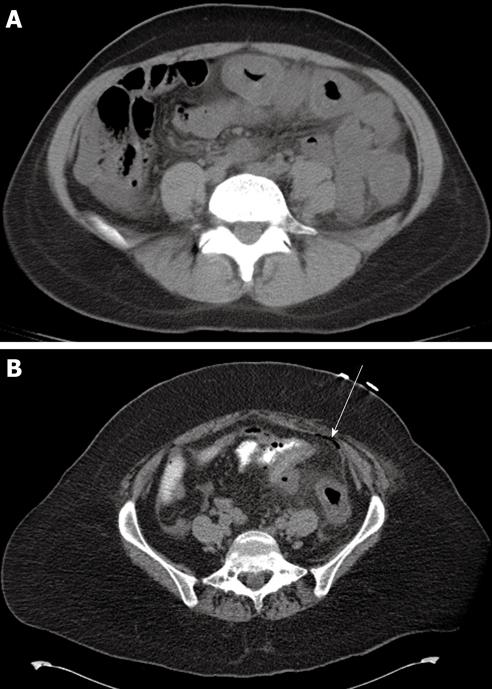 A 55-year old Hispanic female who underwent a left mastectomy for stage IIA invasive ductal carcinoma of the breast was receiving adjuvant docetaxel and cyclophosphamide. Nine days after the first cycle, she presented with diarrhea and severe abdominal pain. The abdominal examination revealed tenderness and guarding in the left lower quadrant. Her white blood cell count was 3200/μL and the platelet count was 449 000/μL. A computed tomography scan of the abdomen and pelvis demonstrated thickening of the walls of the descending colon and sigmoid with pneumatosis and free peritoneal air suggesting a perforation of the colon (Figure 2B). She was taken for emergency laparotomy and purulent fluid was found in the peritoneal cavity. The perforation was identified in the sigmoid colon and this area was not viable and was resected with a Hartman procedure. Pathological examination of the resected colonic segment revealed congestion and edema of the mucosa with focal areas of transmural necrosis (Figure 3A and B). There were no pseudomembranes in the colon and the clinical and pathological findings were consistent with ischemic colitis. She developed a postoperative collection in the abdomen which was drained percutaneously and she went on to make a full recovery. The characteristics of these four cases are summarized in Table 1. 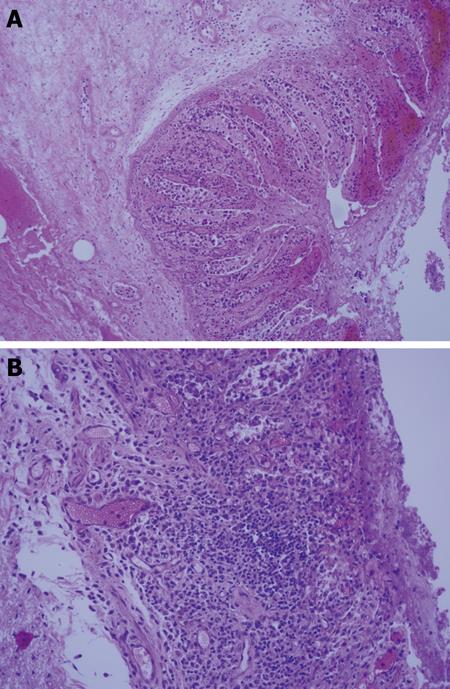 Pseudomembranous colitis with and without positive stool assays for C. difficile toxins has been described as a cause of diarrhea in patients receiving chemotherapy[1-5]. The mechanism of chemotherapy-induced pseudomembranous colitis seems to be, at least partially, explained by the development of inflammatory changes and disruption of the normal colonic epithelium, often associated with mucosal necrosis. It has also been postulated that many chemotherapeutic agents exert a microbicidal effect on the normal intestinal flora, thus creating a favorable environment for the proliferation of C. difficile and production of its exotoxins. Kamthan et al[1] reported a series of 70 hospitalized cancer patients that developed diarrhea during chemotherapy; of these, 30% were treated empirically with vancomycin and/or metronidazole with complete resolution of the symptoms. Although most of these patients were not tested for C. difficile toxins in the stool, four of them had documented pseudomembranous colitis, an endoscopic finding considered almost pathognomonic of superinfection by this anaerobe bacillus. Chemotherapy was thought to be directly related to the development of this complication in all of these patients. Yokoyama et al[2] reported a series of nine patients undergoing chemotherapy treatment that developed bloody diarrhea during the treatment course; four of these patients had pseudomembranous colitis visualized by colonoscopy and one of them tested negative for C. difficile toxins in the stool. Anand et al[3] reviewed all the published cases up to 1993 of C. difficile colitis associated with chemotherapy in the absence of prior or concurrent antibiotic use and concluded that the most common agents implicated in combination regimens were methotrexate, doxorubicin and cyclophosphamide. As single drugs, methotrexate and 5-fluorouracil were the most common offenders.

The association between docetaxel and pseudomembranous colitis is less well established but has been reported. Docetaxel-based chemotherapy regimens for metastatic breast cancer have been associated with colitis in two published series of 14 and 24 patients with 6 patients in each series developing severe diarrhea[6,7]. These cases uniformly presented with fever, abdominal pain, hemorrhagic colitis, short term neutropenia and negative C. difficile toxin assays in the stool. Colonoscopy was generally avoided in these two series because the patients were considered to be at high risk for bowel perforation given their clinical presentation. In order to estimate the incidence of this complication, Li et al[5] reviewed 1350 cases of patients treated with taxane-based chemotherapy for breast cancer at the MD Anderson Cancer Center and found that the incidence of severe colitis requiring hospitalization was 1.9% among patients treated with docetaxel.

In what may be a separate clinical entity from pseudomembranous colitis associated with chemotherapy, neutropenic enterocolitis has been associated with taxane-based chemotherapy in a number of reports in the literature[8-11]. Many of the reported cases had rapid clinical deterioration requiring emergency laparotomies and leading to death in some cases. Among the four patients described in our series, only one was neutropenic at presentation and he had a good outcome with conservative measures. Since it may be too risky to perform sigmoidoscopy or colonoscopy in these cases, CT scanning may help in the workup of such patients who are neutropenic and presenting with abdominal symptoms. In our series, the CT scan findings of colonic inflammation alone in one case and inflammation with perforation in the other case helped in the decision making for surgical intervention.

Single-agent docetaxel was associated with severe non-neutropenic ischemic colitis in a report by Hussein et al[12]. In that case, necrotic colon was found at laparotomy but the mesentery was well perfused, suggesting that mesenteric infarction was not responsible. Histological examination revealed patchy bowel ischemia of varying degrees, associated with venous thrombosis within the wall of the bowel. These findings were consistent with ischemia due to microvascular thrombosis. The pathological findings in the fourth patient in our series were very similar to the report by Hussein et al[12]. In our patient, in addition to the patchy ischemia and necrosis, there was a significant component of inflammatory changes including mucosal and submucosal edema, hemorrhage, acute inflammatory infiltrates, mucosal ulceration and serositis.

We postulate that pseudomembranous colitis, neutropenic enterocolitis and ischemic colitis may share a similar pathophysiological basis and probably represent varying degrees of bowel inflammation and necrosis elicited by docetaxel.

In conclusion, severe diarrhea is a common side effect of chemotherapy. The majority of cases can be controlled with anti-peristaltic agents, dose adjustments or discontinuation of the culprit agent. Pseudomembranous colitis should be included in the differential diagnosis when assessing patients that develop severe diarrhea during treatment with systemic antineoplastic chemotherapy; negative stool assays for C. difficile toxins should not lead the clinician away from this diagnosis whenever there is a strong suspicion for this disease. Colonoscopy or sigmoidoscopy are useful diagnostic procedures, particularly in patients that do not respond quickly to the actions previously stated, as the presence of pseudomembranes in the colon is pathognomonic of C. difficile associated disease. Prompt initiation of antibiotic therapy with metronidazole (either oral or intravenous depending on the tolerance of each patient and the clinical severity) and/or oral vancomycin appear to be effective options. In addition to pseudomembranous colitis, taxane-based regimens can also be associated with severe neutropenic enterocolitis and ischemic colitis. The cases presented demonstrate the significant risk of causing altered bowel function with chemotherapy and highlights the varied spectrum of colitis associated with taxane use.