Multiple classes of molecular biomarkers have been studied as potential predictors for rectal cancer (RC) response. Carcinoembryonic antigen (CEA) is the most widely used blood-based marker of RC and has proven to be an effective predictive marker. Cancer antigen 19-9 (CA19-9) is another tumor biomarker used for RC diagnosis and postoperative monitoring, as well as monitoring of the therapeutic effect. Using a panel of tumor markers for RC outcome prediction is a practical approach.

To assess the predictive effect of pre-neoadjuvant chemoradiotherapy (NCRT) CEA and CA19-9 levels on the prognosis of stage II/III RC patients.

CEA and CA19-9 levels were evaluated 1 wk before NCRT. According to the receiver operating characteristic curve analysis, the optimal cut-off point of CEA and CA19-9 levels for the prognosis were 3.55 and 19.01, respectively. The novel serum tumor biomarker (NSTB) scores were as follows: score 0: Pre-NCRT CEA < 3.55 and CA19-9 < 19.01; score 2: Pre-NCRT CEA > 3.55 and CA19-9 > 19.01; score 1: Other situations. Pathological information was recorded according to histopathological reports after the operation.

The combination of post-NCRT CEA and CA19-9 was a predictive factor for clinical stage II/III RC patients receiving NCRT, and the combined index had a stronger predictive effect.

Core Tip: Tumor microenvironment (TME) combined with neoadjuvant chemotherapy (NCRT) is the standard treatment for resectable stage II/III rectal cancer (RC). Multiple classes of molecular biomarkers have been studied as potential predictors for RC response but there is no sufficient evidence for any of them to be introduced into clinical practice. By retrospectively evaluating clinical stage II/III RC patients undergoing NCRT followed by standard TME, we found that the combination of NCRT carcinoembryonic antigen and carbohydrate antigen 19-9 levels could be a prognostic predictor for clinical stage II/III RC patients receiving NCRT, and the combined indexes had a stronger predictive effect than the index alone.

In the United States, tumor microenvironment (TME) combined with neoadjuvant chemotherapy (NCRT) is the standard treatment for resectable stage II/III rectal cancer (RC)[1-3]. Although numerous studies have shown that NCRT can reduce the rate of local recurrence, it is difficult to improve overall survival (OS)[4-6]. Multiple classes of molecular biomarkers have been studied as potential predictors for RC response but there is no sufficient evidence for any of them to be introduced into clinical practice[7]. Moreover, additional systematic chemotherapy could increase the toxicity [8,9]. Therefore, it is critical to identify predictive factors for clinical stage II/III patients and give additional chemotherapy or more aggressive treatment strategies.

Pathological indicators are generally considered to be the most effective predictive factors[10,11]. Unfortunately, pathological characteristics are difficult to obtain and quantitate and are usually affected by the operation and specimen-processing quality[8,9]. Moreover, the pathological indicators, which can only be obtained after surgery, do not assist in judging whether patients need additional chemotherapy before undergoing NCRT or surgery.

A glycoprotein, carcinoembryonic antigen (CEA), is the most widely used blood-based marker of RC and has proven to be an effective predictive marker[12-14]. According to You et al[15], the increment in postoperative serum CEA levels (CEA < 5 vs > 5) was an independent predictor of a poor prognosis. However, the major problem with the use of CEA as a marker of RC is its association with other types of cancer and benign diseases (inflammatory bowel disease)[16-18]. Cancer antigen 19-9 (CA19-9) is another tumor biomarker used for RC diagnosis and postoperative monitoring, as well as monitoring of the therapeutic effect[19,20]. Due to the highly heterogeneous nature of RC, a single tumor marker is unlikely to become a stand-alone predictive factor. Using a panel of tumor markers for RC outcome prediction is a practical approach.

In this study, we analyzed the predictive value of the combination of pre-NCRT serum tumor markers (CEA and CA19-9) in clinical stage II/III RC patients. 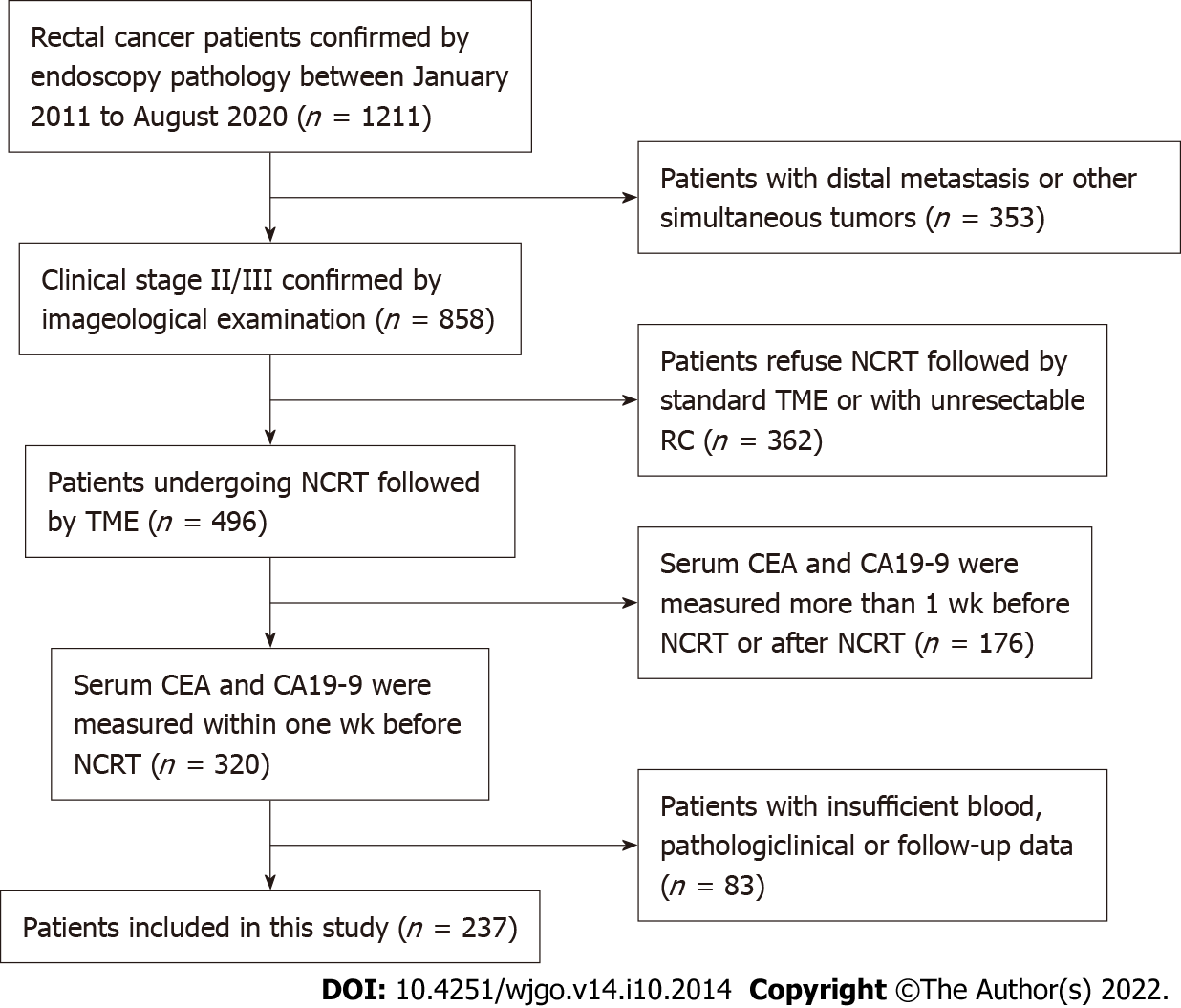 This retrospective study was approved by the ethics committee of our hospital. The requirement for patients’ informed consent was waived due to the retrospective nature of the study.

Treatment and follow-up of patients

Postoperative follow-up was performed according to the National Comprehensive Cancer Network guidelines[13]. Generally, patients were followed up clinically and radiographically at three-month intervals in the first 2 years after surgery, then every 6 mo for 3 years, and annually thereafter[13]. Follow-up data were obtained from medical records, telephone follow-ups, out-patient clinics, or visits.

Data were analyzed using SPSS for Windows (IBM Corp. Released 2013. IBM SPSS Statistics for Windows, Version 22.0. Armonk, NY: IBM Corp.). Continuous data were described in terms of the median and interquartile range (IQR) whereas categorical variables were described in terms of frequencies and percentages. Significant parameters identified in the univariate analysis (P < 0.05) were entered into the multivariate Cox regression analysis to determine independent predictive factors[23,24]. All statistical tests were two-sided, and a P value of < 0.05 was considered statistically significant[25].

In general, pathological characteristics have the strongest predictive value for patient outcomes[21]. To compare the predictive effect of the NSTB score, several pathological indicators were included. To prevent the effects of pre-NCRT CEA and CA19-9 levels on the NSTB score, two models, one including and the other excluding the NSTB score in the multivariate analysis, were established.

ROC curves identified the optimal cut-off for survival prediction by pre-NCRT CEA and CA19-9 were 3.55 and 19.01, respectively. They divided patients into different groups. Figures 2-4A show the OS of included patients stratified by pre-NCRT CEA, CA19-9, and the NSTB score, respectively, and Figures 2-4B show their DFS stratified by the same parameters. According to the Kaplan–Meier curves, increased pre-NCRT CEA and CA19-9 levels and higher NSTB scores were all associated with decreased OS and DFS. 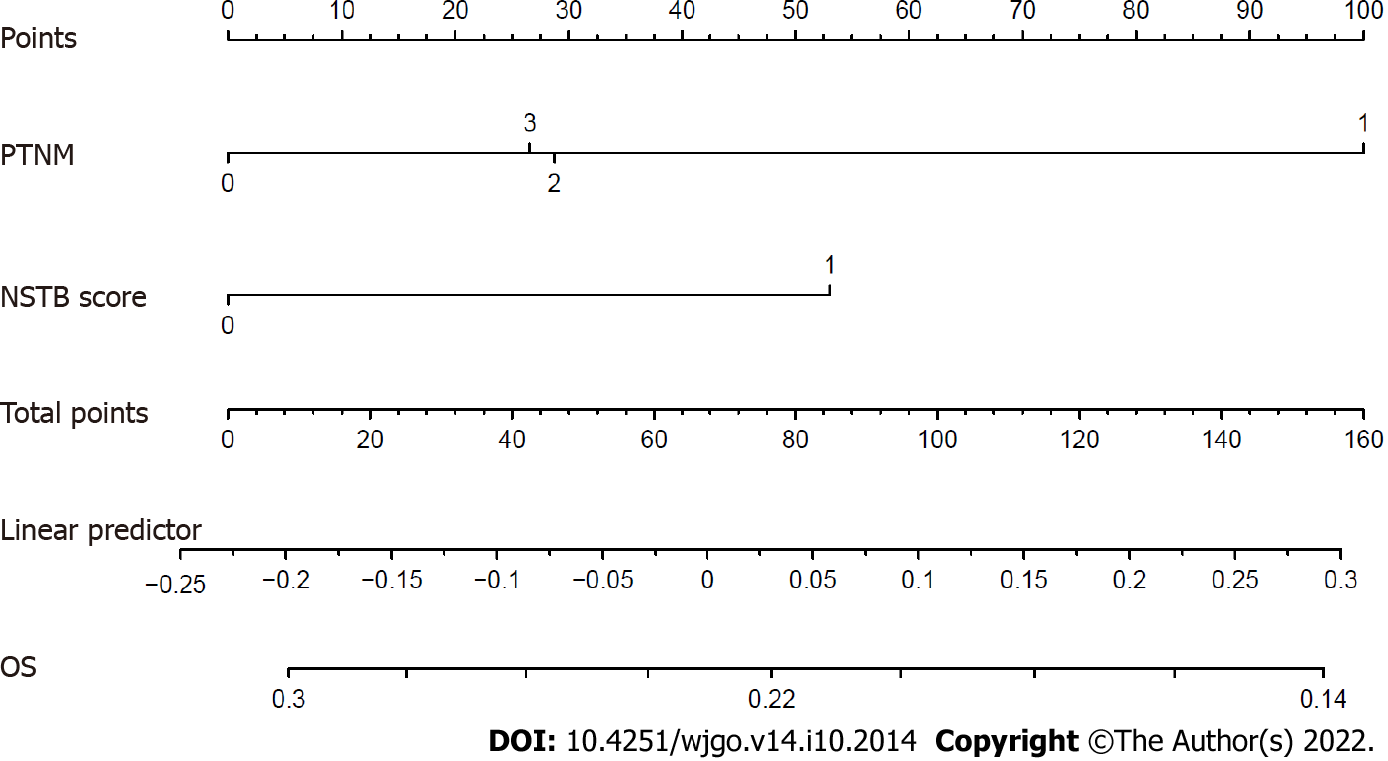 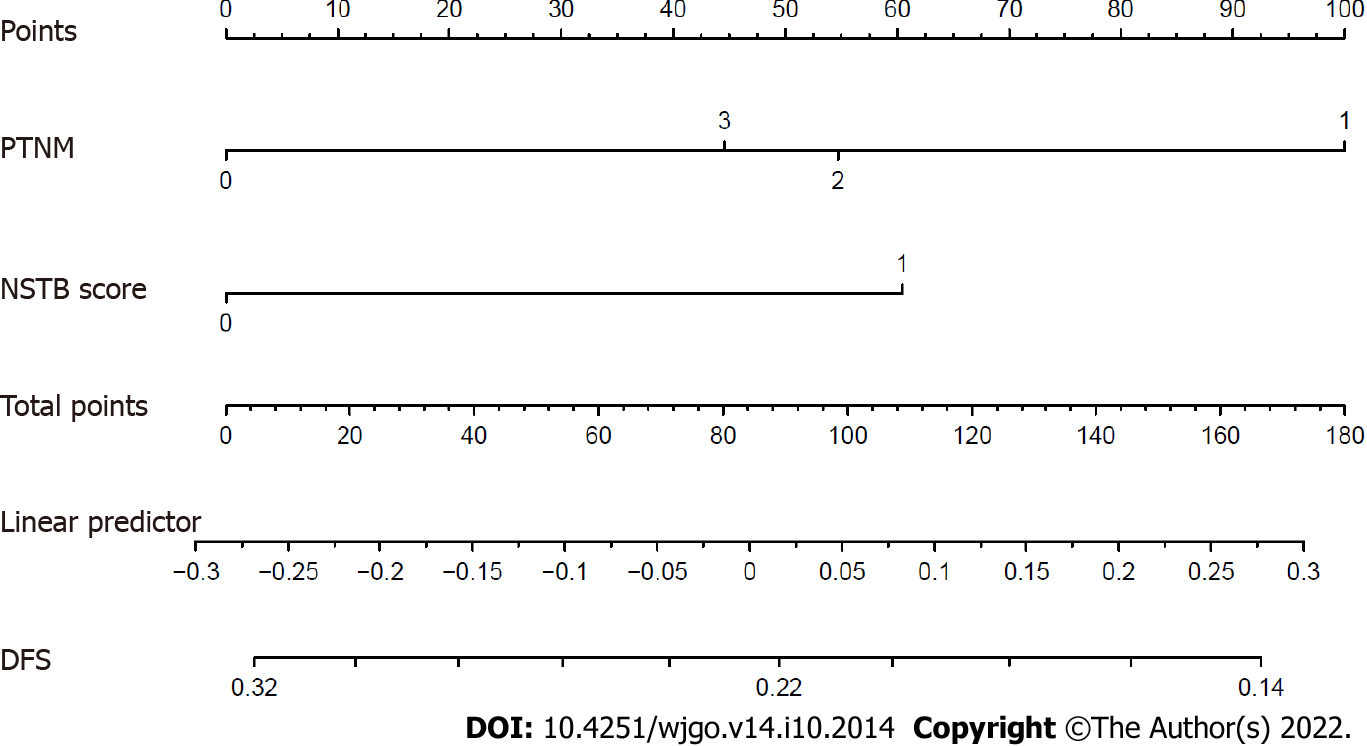 Our data showed that the combination of pre-NCRT tumor markers had better predictive value than a single marker. Although univariate analyses demonstrated that lower pre-NCRT CEA and CA19-9 levels were potential indicators of a better prognosis, the multivariate analysis proved that only the NSTB score and pathological TNM stage could independently determine the prognosis. In general, pathological indicators had a more robust predictive value than other indicators in determining the prognosis[8]; however, the multivariate analysis revealed that the NSTB score could predict outcomes better than pathological characteristics of lymphatic invasion, vascular invasion, nerve infiltration, and CRM invasion. Thus, we propose that the NSTB score should be used to guide the treatment and determine the prognosis of patients with RC of clinical stage II/III.

Pathological findings were generally recognized as the most effective indicators to predict the prognosis[8]. A previous study revealed that lymphatic invasion, perineural invasion, vascular invasion, CRM invasion, LN metastasis, and a higher tumor invasion stage can predict a worse outcome[4]. However, pathological characteristics were difficult to identify as they are usually affected by the quality of surgery and specimen-processing, and their analysis is significantly subjective and difficult to quantitate[15]. Moreover, pathological indicators could only be obtained after surgery, which means that it was impossible to judge whether patients needed additional chemotherapy before undergoing NCRT or surgery. Moreover, the NSTB score could be obtained before NCRT and surgery.

Some molecules or proteins can determine a patient’s prognosis. Lin et al[26] reported that the high expression of EphA4 served as an independent adverse predictor for DFS. Rödel et al[27] found that an increase in survivin levels was a significant risk factor for local recurrence and decreased DFS. Hiyoshi et al[28] demonstrated that serum miR-143 was a non-invasive and novel predictive marker for locally advanced rectal cancer (LARC) patients. Unfortunately, all of these molecular or protein markers had the following disadvantages: First, the detection cost of these markers was high, which increased the economic burden for patients; second, these novel markers could only be detected in large medical centers, which made them difficult to be used widely in clinical practice; finally, these new indicators lack uniform standards, and the test results may vary a lot in different medical centers. CEA and CA19-9 levels are widely used clinically because they are cheap, convenient to detect, and have uniform standards in different hospitals.

CEA is currently one of the primary markers for the diagnosis and follow-up of RC[2,18,19]. We found that lower CEA levels could predict a better prognosis in a univariate analysis. CA19-9 has shown great value for the differential diagnosis of malignant tumors and disease monitoring and evaluation[19]. Compared to either CA19-9 or CEA alone, an essential advantage of the combination was that it could reduce the interference of other factors and increase the predictive effectiveness. Although some studies also focused on the influence of CEA and CA19-9 levels on the prognosis, the two markers were studied separately[2,18-20,29]. Consequently, they failed to identify CEA and CA19-9 as predictive factors, which was similar to our findings. However, the predictive value increased significantly and was even stronger than that of several pathological factors when they were combined.

Our study had a few strengths: Firstly, to the best of our knowledge, this is the first study that combined CEA and CA19-9 to evaluate the prognosis of clinical stage II/III patients undergoing NCRT. Secondly, we adopted an ROC curve to determine the cut-off point of CEA and CA19-9 instead of just evaluating whether they were higher than the normal values, which optimized the efficiency of the OS prediction. Ultimately, the NSTB score was cheap and easily accessible before treatment.

Our study also had some shortcomings. First, this was a retrospective study conducted in a single medical center. Second, the cut-off points of pre-NCRT CEA and CA19-9 levels in our center may not always be reproducible in other centers.

This study established a NSTB score by combining pre-NCRT CEA and CA19-9 levels. The NSTB score can independently predict the prognosis of patients with LARC of clinical stage II/III who underwent NCRT. Its predictive value was stronger than that of either marker alone, and even some pathologic characteristics.

Multiple classes of molecular biomarkers were studied as potential predictors for rectal cancer (RC) response but there was no sufficient evidence for any of them to be introduced into clinical practice.

We established a novel serum tumor biomarker score by combining pre-NCRT CEA and CA19-9 levels. The NSTB score can independently predict the prognosis of patients with LARC of clinical stage II/III who underwent NCRT.

More accurate prediction models need to be established by studies with a larger number of patients.